Interesting extract from:
McQueen's Machines: The Cars and Bikes of a Hollywood Icon
by Matt Stone

Steve McQueen - 1967 Austin Mini Cooper S
We don't know for sure why Steve McQueen wanted a Mini, but one possible reason may have been his personal association with Cooper. He and McQueen got to know each other when the actor was in Britain filming The War Lover. Cooper sold McQueen one of his Cooper Formula Junior open wheel racers in late 1961. He later extended McQueen an opportunity to join the factory Cooper racing team (see Chapter 3).

Lee Brown, who first met McQueen when he came to Brown's Hollywood paint and body shop with his Ferrari Lusso, became involved with the actor's Mini Cooper S. Little did Brown suspect he would end up owning the car a decade after McQueen's passing.
"Back in the 1960's, if you didn't have a Ferrari and a Mini Cooper, you just weren't a movie star. Well Steve McQueen already had his Ferrari Lusso and spotted this Mini over at Hollywood Sports Cars."

The exact date isn't clear, but it was likely that he purchased the car in early 1967. "He called me up and said, "I bought it. Go over and pick it up, and I'll come to the shop and we'll figure out what to do with it." McQueen always did things to his cars to make them his own, and he had certain things that he liked and didn't. The mini was originally green with a white top, but Steve liked browns and grays and other subtle colours. So we painted it a medium brown metallic with a beige top. It's been repainted since, and the current colors aren't exact. He wanted a wood dash, so we did that, and I also installed the single fog light and the sunken radio antenna."
Brown recalls that Tony Nancy stitched up the interior, although Brown chided McQueen that the mottled, grainy vinyl he selected "looked like it belonged in a booth at a diner" more than in the cabin of a British sports car. Brown installed the large vinyl sunroof when he originally painted the Mini.

McQueen couldn't wait to take his new toy for a ride. "He was really on the button, redlining the car in every gear. We were heading down Franklin Avenue in Hollywood, and at the last instant, Steve decided to take a right turn up one of the canyon roads. He got off the gas and pitched the car around the turn but caught the curb with the right rear tire. That put the car up on the two driver's side wheels. We must have gone that way for 150 feet, McQueen working the wheel to keep us from rolling over or hitting any of the parked cars on the opposite side of the street. Finally it landed right-side up, on its own wheels. We were both white as sheets, and our knees were knocking." The damage to the right rear wheel and tire were minimal, but they very nearly ran out of gas heading home. "Steve was so hot to take the car for a run, neither of us checked the gauge. McQueen, as was often the case, didn't have a dime on him. I had to pay for the gas to get us back to the shop."

Brown recounts another amusing story: "I arrived at my shop one morning, and McQueen was there with the Mini. He was agitated and clearly hadn't slept. I asked what was the matter, and he pointed to a big dent on the front fender. He was heading home the previous night and was driving on Mulholland Drive. The area wasn't all that populated back then. He needed to take a leak, so he pulled over to the side of the road. While he was relieving himself, he saw the car roll by him. It was parked on a bit of a grade, he forgot to set the parking brake and must have left the gearshift in neutral too. He went chasing after it, but couldn't catch it in time, and it smashed into a parked car's bumper. He knocked on the people's door, and you can imagine their surprise at having Steve McQueen show up on your doorstep in the middle of the night. McQueen said, I offered to pay for the damage, but the guy didn't want any money. He said he wasn't going to call the police either, but he kept me up until 6:00 in the morning. I practically had to run out of there. "McQueen came directly to my shop to leave the car off for repair, and it was no wonder he looked so tired."

After a few years, McQueen sold the car back to Hollywood Sports Cars. It was subsequently resold a time or two before Brown spotted it for sale in the classified ads in 1990, approximately two decades after McQueen last owned it. "I verified that it was Steve's car, the guy was asking $10,000, which was a ton of money for a run down Mini." It is in original, unrestored condition, although it hasn't run in years. Even though Lee Brown is more than capable of restoring it, he seems happy to enjoy it just the way it is.

Dad taught Steve McQueen (and a Great Train Robber) how to drive... John Cooper's son on a childhood as 'Mini Cooper'
http://www.dailymail...ini-Cooper.html

I wonder if he intentionally colour co-ordinated himself so well with the car ... Mind you everything was brown in the 70s. Even the guy who's got it now is called Brown. 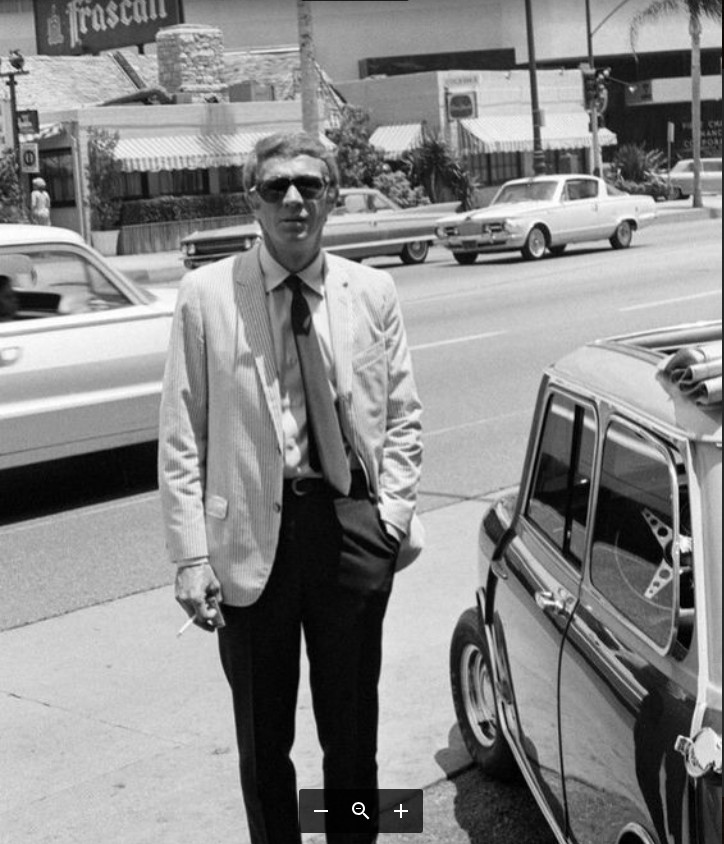 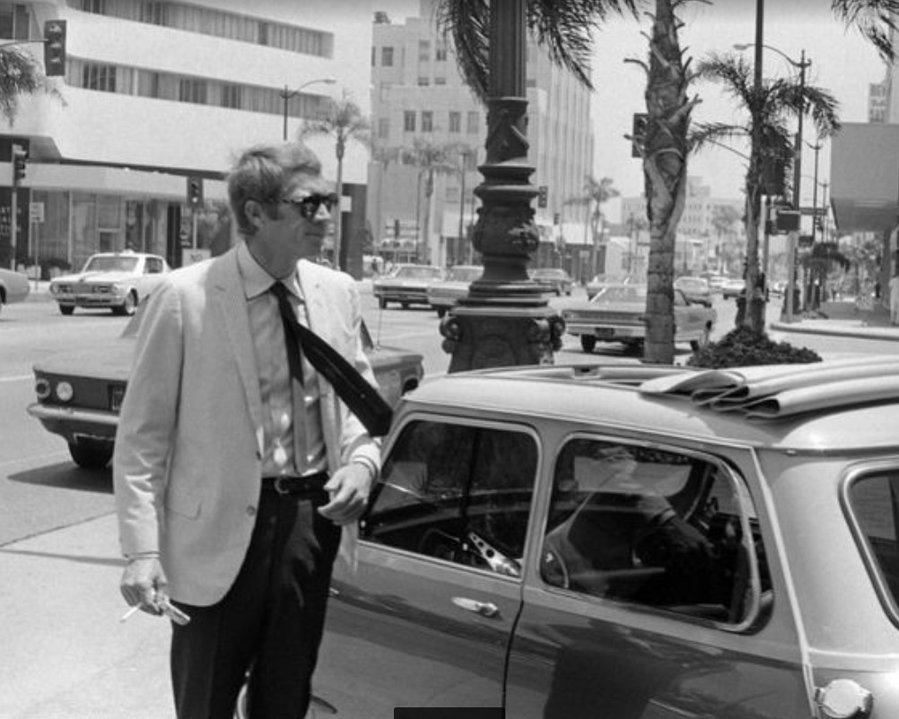 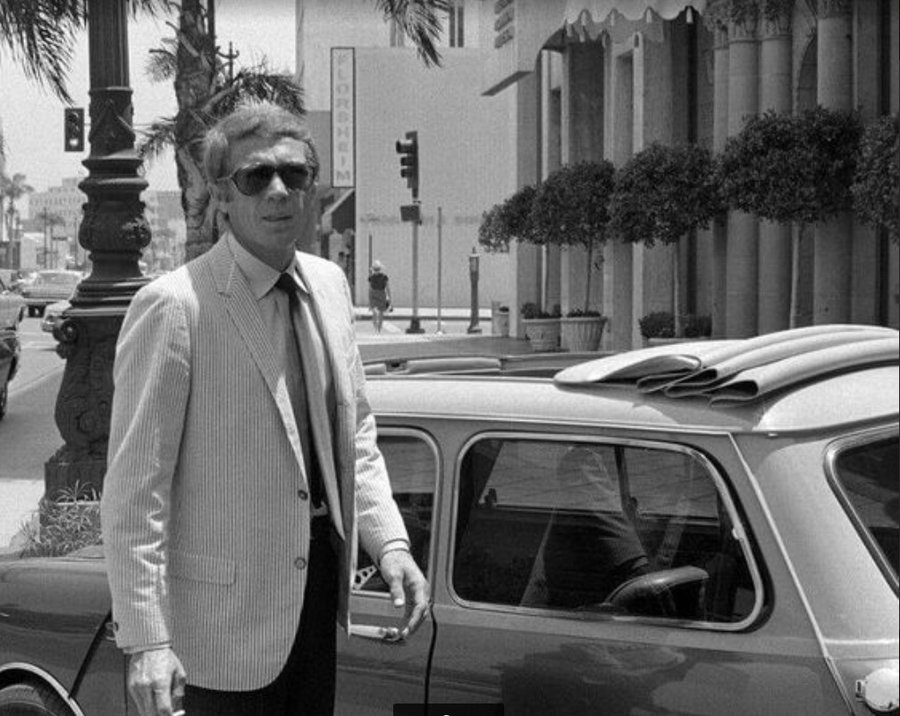 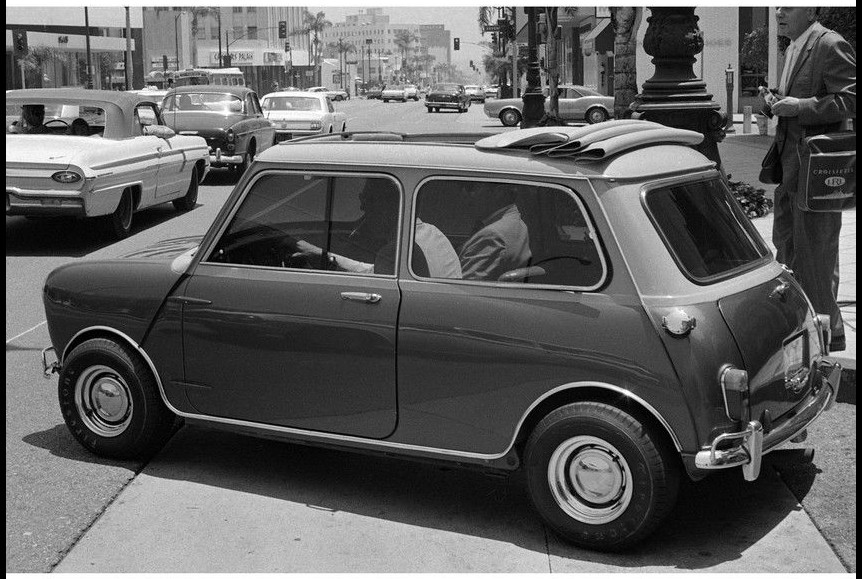