The one millionth Hydrolastic unit was gold plated and presented to Dr Moulton who invented the system.
http://www.hydragas.co.uk/history.html

Hydrolastic (wet) suspension was first used on the ADO16 BMC 1100 range in 1962, as it was not ready in time for the launch of the Mini in 1959 but was later fitted to the Mini from 1964 to 1971 until cost cutting under BL saw the Mini return to rubber cones (dry) suspension.

Thanks for sharing these videos. The second one on the dirt stages looks like that episode of top gear when they compared how two cars performed recording the horse racing.

Interesting cross section through an old Hydrolastic Displacer by Minimail (Refurbished and re-hosed units are available from Minimail - £132 inc VAT on an exchange basis).

Found this interesting write up below on the 'Landcrab' forum, originally published in the ADO16 club magazine and thought it worth posting here:-

All owners of Hydrolastic-sprung cars certainly know the big advantages these suspensions give to the ride and handling of the cars. But many will by now also know the downside. Due to the age of the systems, failures of spring units start to get more often. Bear in mind, that nearly all Hydrolastic units are now older then 40 years! Quite impressive for a highly loaded piece of rubber, which forms the spring in these cars.

Keep it or replace it?

It cannot be denied that modern standard steel spring and damper suspension have come a long way since the 60s and do work very well. And computations can help to adjust the rates close to getting perfect even before the first test drive. With this in mind, the question should be allowed, if a replacement made of standard springs and dampers cannot be made. Of course this is possible and has already been done to my knowledge to at least one 1300 and one Austin Allegro. And there are – of course – kits available to replace the rubber springs in Minis and Hydragas on the MGF. But this requires quite a bit of effort and specifically made parts, so it will be quite expensive.

So why not try to keep Hydrolastic? There will be a day, one day, when no original unit will be in working condition anymore. It is already getting more and more difficult to get hold of good working ones. New ones out of the box are a rarity since a couple of years. Due to the great resilience of the units in the first place, the amount of spares produced was quite small. On the other hand, there are good reasons to think about ways to keep Hydrolastic working. For one it was one of the defining features of the ADO16, so an important part of keeping one of these in original condition to preserve as a classic. On the other hand the ride experienced with Hydrolastic cannot be replicated with a conventional setup. The reason is, that both spring rates and damping rates are highly progressive, both increasing with the load of the car in a way that the car 'feels' roughly the same, independant of the load. And this is before getting the interconnection of the units on each side into play. Today similar effects are achieved using very sophisticated computerised adaptive damping and anti-roll systems.

The late Dr. Alex Moulton was well aware of the problems owners of cars with 'his' suspension system may have in the future, as well as some shortcomings particular in the ADO16. During a couple of meetings over the past 10 years he has shown me a possible solution.

There are generally 3 problems arising with Hydrolastic units:

1) The lower diaphragm, which houses the push-rod with the cone may split. In many cases a damage of this membranes can occur if there is dirt or corrosion trapped between the cone and the rubber. If a unit is out of the car, it is adviseable to clean this area.

2) The rubber hose attached to the units may split. This problem has already been dealt with. A new hose can be attached by using a strong clip, as is done by the Landcarb (1800) club for some time now. This is close to the way the original fitting was attached and the preferred solution for durability.

3) The rubber spring ages and may eventually burst. This is a slow process and usually shows itself in the spring 'bulging' out of the unit together with a slight degradation in ride quality over ridges or small bumps.

There is not yet a possibility to deal with problem 1), as this would not only mean to open the unit, but also to have the diaphragm remade. So trying to keep this in good shape seems necessary. As stated, failure 2 can be rectified by adding a new hose. This leads to dealing with fatigue of the rubber spring itself.

Dr. Alex Moulton has put some thought into this issue and came up with two possible solutions. The first idea was to add a flat steel-spring on the top of the Hydrolastic units, taking on the load as long as the rubber spring itself has no leaks. In some cars this idea would have lead to installation problems due to space requirements. Discussing this with contacts in the car supplying industry the conclusion is that it will actually be possible and not very expensive to remould the rubber springs, even in small series, if the metal parts were supplied. This is the key problem: Due to the needed strength re-manufacture of the steel parts seems to be prohibitive due to the cost involved. So the steel pressings would need to be re-used. The units will need to be opened and re-sealed for this kind of repair.

There are three major steel parts forming a Hydrolastic unit: One almost tube shaped piece containing the rubber spring (or rubber cheese, as Moulton called them), a 'hat' shaped part containing the damper and separating spring and displacer in the middle and last the cut-off cone containing the displacer diaphragm with the actuating rod and cone. During fabrication all three parts with all internals were put into a press and then the overlapping edge was rolled to form the rim in the centre holding all three parts firmly together. The first step, opening them, is relatively straight forward: The rolled part of the edge needs to be carefully removed. The three parts can be separated afterwards from each other for inspection and replacement of rubber parts.

Dr. Moulton came up with a solution how to close the units again. Three rings where manufactured, practically creating a kind of compression fitting held together with a large captive nut in the place where the original joint was. The ring around the spring unit needs to be split in halves to be able to be fitted, whilst the other ring and the captive nut can be slid over the unit from the displacer end. Tightening these should be done in a hydraulic press similar to the original process. Dr. Moulton actually has had a prototype made and put it into a test bed to check the unit after refitting successfully.

So right now the plan is laid how Hydrolastic units can be partially refurbished. The rubber internals and the connection hose can be renewed using the method described above. Also the possibility of combining intact parts of units to a working one is given. As the damper valves are also accessible when the unit is dismantled, these can also be renewed or even modified to address the weakness of the installation in the ADO16.

Right now it would be worth considering that the club, or individual members, collect all Hydrolastic units, even those with defects. Dr. Moulton advised us not to throw any of them away to secure the future use. They might - apart from directly keeping cars on the road with intact units - be a valuable source of spares for the reconditioning process of Hydrolastic units.
Read more: http://landcrabforum...2#ixzz3wr5kxKyF

Also a trial repair to the top rubber area of an Austin 3 Litre displacer unit below.......
(At least Hydrolastic Mini owners have rubber cones available if all else fails but of course most other BMC/BL Hydrolastic cars have no long term alternatives).

Quote:
"Just to recap on what I think is achievable with regard to repairing these units, the three failures are; hoses split, top rubbers burst open, lower rubbers burst open. From a repair point of view, hoses are easy to replace, a burst lower end is beyond hope of repair currently, a burst top end I felt could be repaired and I have managed to do just that. Some of the problem with the top end is the rubber thickness is quite thin, once this thin film perishes and splits open water gets in and attacks the top of the valve area, this of course causes more deterioration. I thought if I could get a liquid rubber that would bond to metal and existing rubber, and cope with some flexing and contain the 250 psi of fluid pressure within the unit it may be possible to repair one. I have two spare units which are both split and leaking from the top so I decided to use these as the basis for my trials......
(see PDF link below for further details and photos)
http://www.austinthr...y June 2014.pdf

Some photos of a set of NOS displacers.....

First 10 pages of this PDF (link below) is an in depth detailed technical article on the ADO16 Hydrolastic suspension (Sep 1962) and the last 9 pages are devoted to the Austin 3-Litre Hysdrolastic suspension (March 1968) both are from the 'Automobile Engineer' magazine.

"The 1964 MG Liquid Suspension Special represents many of the changes that swept through the Indianapolis 500 in the mid-1960s. This car was developed by Kjell Qvale, owner of the British Motor Car Distributors (BMC) in San Francisco, and famous race car engineer Joe Huffaker. It was crafted with a chrome molybdenum space frame and was powered from the rear by a 255 cubic-inch Offenhauser racing engine. It was test driven by the famous A.J. Foyt who set a track record at Phoenix. It was raced by great drivers, namely Walt Hansgen, Bob Vieth, Jerry Grant and Wally Dallenbach. It is named the 'Liquid Suspension Special' because it used the same ADO16 Hydrolastic units as used in the production MG sedans." 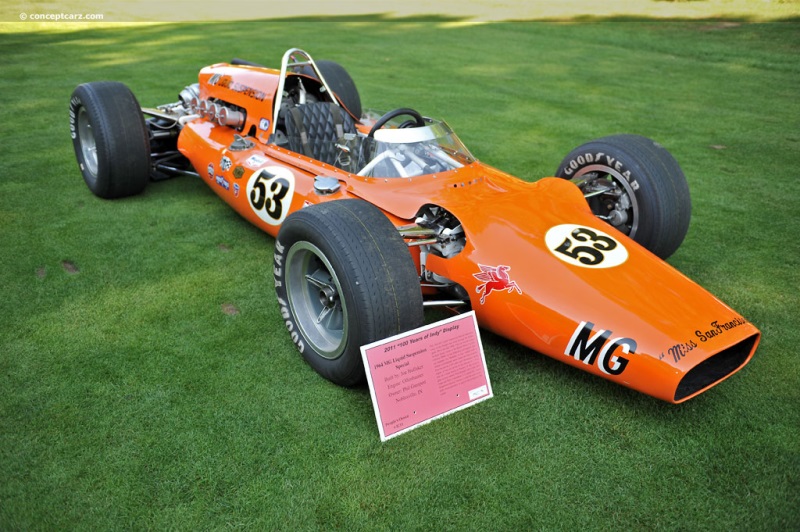 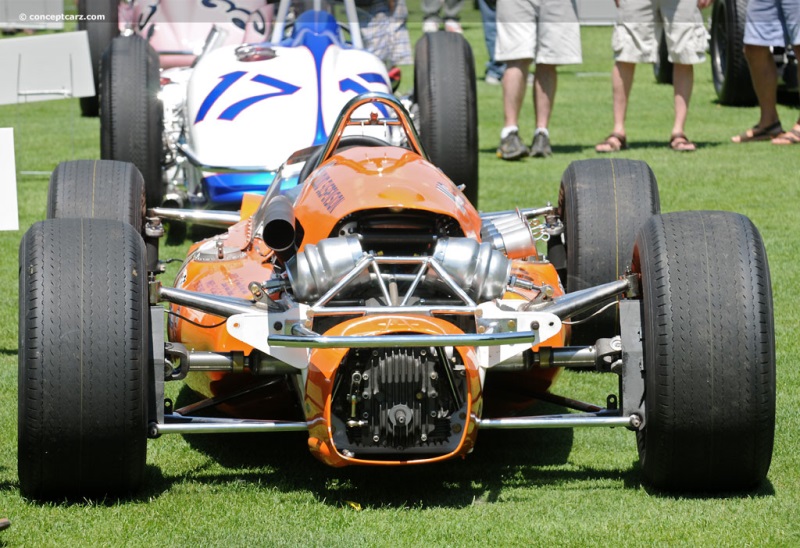 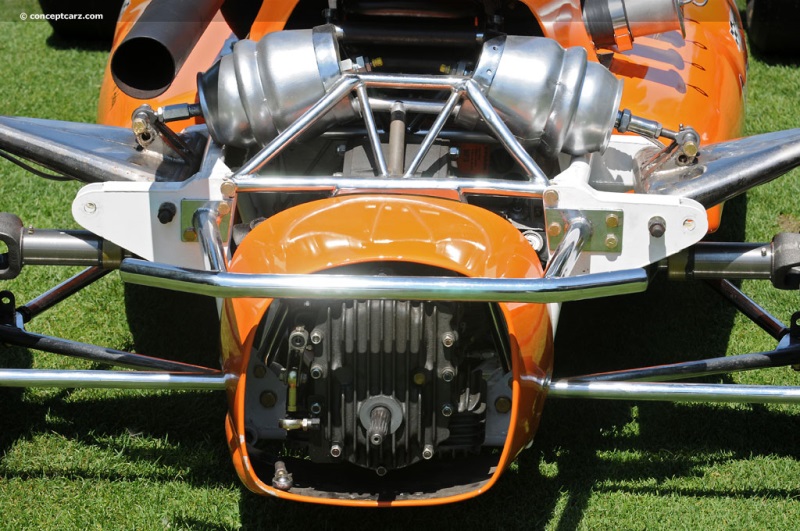 I once started building a front wheel drive, Imp engine single seater with moded Mini front suspension so that the rubber doughnuts were facing each other horizontally, as pictured above.

Then I got married !

Another section through a Mini Hydrolastic Displacer 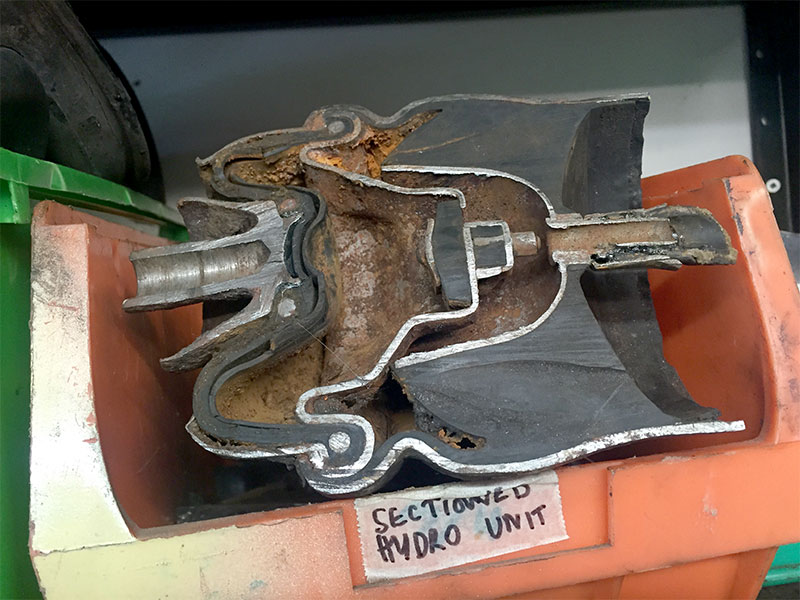 We have developed a way of putting a new hose on hydrolastic units . We offer (when available) refurbed used units that have been pressure tested,checked and repainted with new gaiter and a new hose .  These are done on an exchange basis.