Rear Seatbelts - Again, But I Need A Good Answer

I have a 1968 Cooper and as such it has no rear seatbelt nor fixing for them.

I have two small children - who although noisy, expensive and occasionally smelly - i do quite like. The wifey also says they cant go in the car without it having seat belts.

I have read through the previous topics, but none really seemed to fully answer how to fit rear inertia set belts to an early car.

Does anyone have any suggestions? The car is having some (alot) of work done so a bit of extra welding shouldnt be a problem.

weld structural support under the parcel shelf and maybe over wheel arches to enable fixing points.

just get the panels that were used in the later cars and add them. so the c pillar part. the parts that went in the rear bins and the spreader plates for the bolts.

I'm unsure whether it isn't also a legal requirement. Your car doesn't have to have them by virtue of its age, but that's not the same as requiring kids to be belted in.

You could copy later cars (beaten to it) for the lower mounts, 80's models with lap belts being the easiest. There are inertia reels that mount at the shoulder, used in some soft tops, series Landrovers etc; you'd have to devise your own reinforcements for the parcel shelf

I need some for my GT too but don't fancy the lap belts, I'll look at the later cars fixings

I'm unsure whether it isn't also a legal requirement. Your car doesn't have to have them by virtue of its age, but that's not the same as requiring kids to be belted in.

If your vehicle doesn’t have seat belts

If your vehicle doesn’t have seat belts, for example it’s a classic car, you aren’t allowed to carry any children under 3 years old in it.

Children over 3 are only allowed to sit in the back seats.

These rules only apply if your vehicle was originally made without seat belts.

Once you fit the extra late plates and belt, you might be interested in this topic: http://www.theminifo...x/?fromsearch=1
Note: he has since done the homologation for a 3seat rear 'bench' so now he can have 3kids in the back and 1 at the front... 😁

That was ok but I would have personally made up some larger spreader plates and welded them to the mounting points.

If I was doing one now, I would certainly follow the method used in the later injection cars but as has been said, this would involve fitting the internal C pillar reinforces, the reinforcing plates inside the boot on the back of the rear bulkhead and the mounting brackets on the arch tubs which would void any originality but once trimmed, these brackets would be hidden from view anyway.

Here is what you would need.

I can't seem to find any availability on the inertia reel mount but it's pictured here http://www.somerford...roducts_id=1222 That may be something that needs to be sourced second hand perhaps. 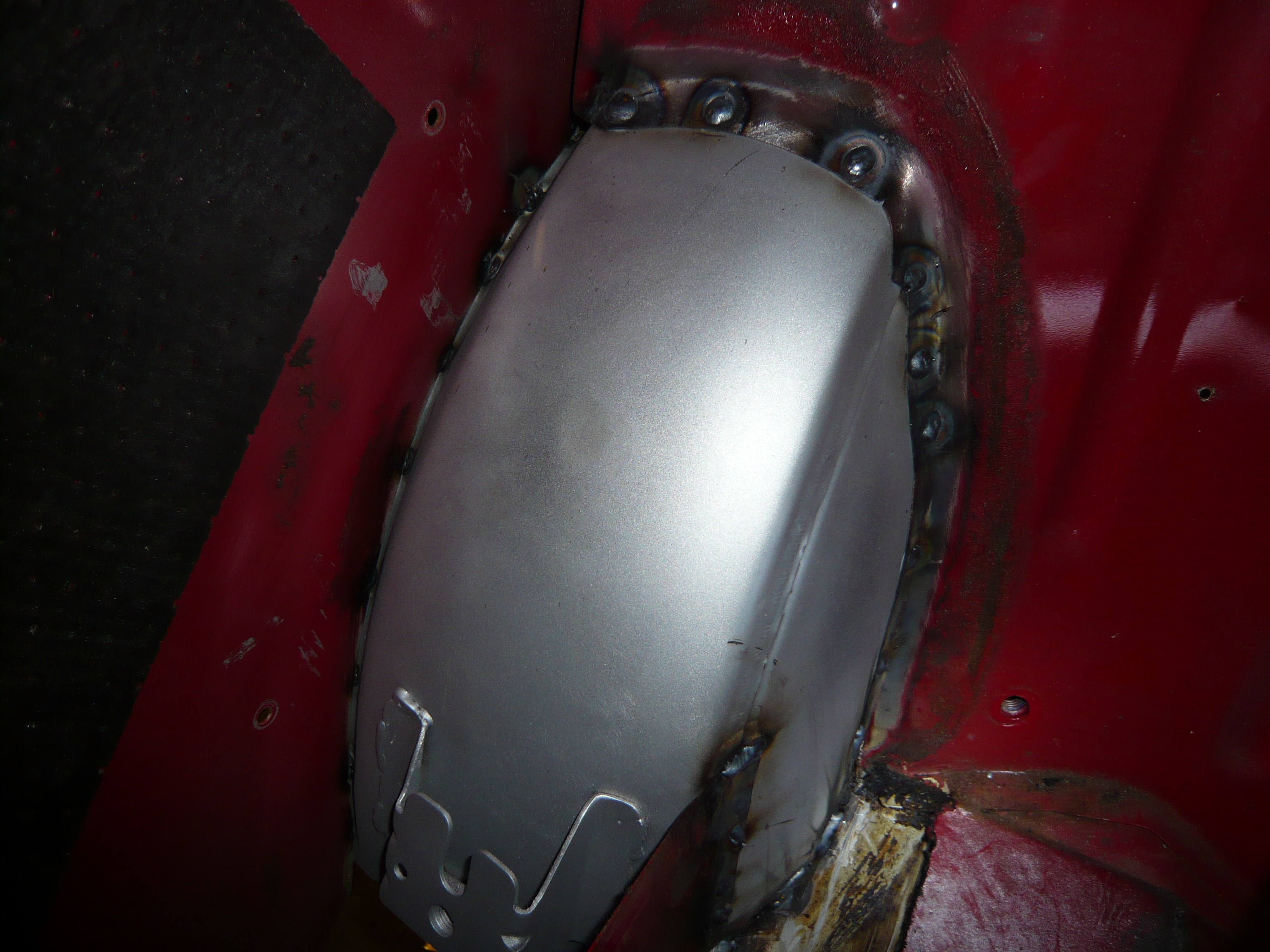 As it stands the only safe place to mount rear belts is per Ben_O's post and Nick by using the C pillars. There is no strength at all in the parcel shelf so even if you put spreader plates in i would have no confidence in the thing as a whole.

Even the lap belts where they mount at the bottom of the rear bulkhead have minimum welding and i would add welds to them just for that little bit more reassurance.

At the end of the day there is only so much you can do to improve a 1950's design.

Somerford do this kit:-

Rear Seat Belt Mounting Kit
"In order to fit rear seat belts to pre-1995 Minis not already so equipped, mounting points will have to be fitted. Somerford Mini takes the strain out of working out what needs to be welded to the car's body with this money-saving kit including all required original factory mounting brackets (seat brace sides x 2, seat brace centre and C post x 2). Use of these brackets enables two rear seat belts to be fitted without the need to alter or change interior trim in the rear of your Mini.

However I'm not sure the rear seat of a classic Mini is a safe place for young children anymore.......I would at least add a high level LED rear brake light to help the distracted drivers of modern cars and SUV's to see your Mini is braking!

thank you all very much for the wealth of replies. I think the safest way is to go forward with the fixings to the C-pillars. I think for most people a renovation has to be a compromise of availability/ safety and originality. The car is being worked on to be used and part of that is taking the two little piglets out with us.

I think the answers in this thread has been by far the most informative.

I've fitted the Somerford kit, but the C-pillar mounts needed modifying, as they're meant for later cars with the larger rear window. I do like that even without the consideration of belts, they will strengthen the C-pillar, which is otherwise just a single skin!

I'm planning on running fixed belts though; I don't think inertia reel belts can be safely fitted without major work, and as such I'd rather have fixed belts fitted properly over inertia reels that might result in injury.

I'm also planning a high-level brake light. I've found some kits online that can be added to make it pulse under hard braking, as new German cars do, so that might go in too.

The bracket mentioned by Ben for the wheelarch to hold the inertia reel is available from Somerford mini,

However, do you think the underlying skin of the wheel arch is strong enough or does it need beefing up?

The bracket mentioned by Ben for the wheelarch to hold the inertia reel is available from Somerford mini,

However, do you think the underlying skin of the wheel arch is strong enough or does it need beefing up?

You could beef up the arches but the later injection cars were just welded to the arches and to be honest, it's a pretty strong rigid area with the intersections of the closing panel, rear bin, boot floor and rear bulkhead.

As long as the arch tub is completely sound, then i can't see an issue.

Thanks for the advice.

My car has a Isle of Wight registration MDL, it was sold in Southsea. Strangely we moved from southsea to Lincolnshire and the original garage would have been visible from our flats lounge window!