While aware ADO88 later LC8/Metro was originally conceived as a Mini replacement before it grew larger and ended up slotting above the Mini, could the Metro have also formed the basis of a smaller yet related retro-looking Mini replacement using the reputedly smaller dimensions of ADO88 (which despite seemingly sharing the share wheelbase was allegedly some 4-8-inches shorter than the Metro yet some 6-inches longer than the Mini)?

Despite being one of a number of styling proposals which was not advanced further (in favour of the approved modern yet utilitarian looking "Breadvan" proposal that infamously received negative feedback in customer clinics) the following ADO88 proposal below seems to be a rough approximation of what a retro-ish Metro-based Mini replacement could have potentially looked like (yet likely needing refining for production), almost like the ADO88/Metro-based analogue of the K10 Micra-based Nissan Be-1 / Nissan Pao / Nissan Figaro family (or even reminiscent of the Peugeot 104SZ SWB "Coupe") and in theory at least being cheaper to build compared to the extra cost and effort of keeping the existing Mini in production.

Also interested in seeing whether the retro-ish looks also extends to the rear on this particular ADO88 proposal (as opposed to the Breadvan proposal).

Update - Possibly found an image of the rear for this particular mock-up ADO88 proposal (not 100% sure). 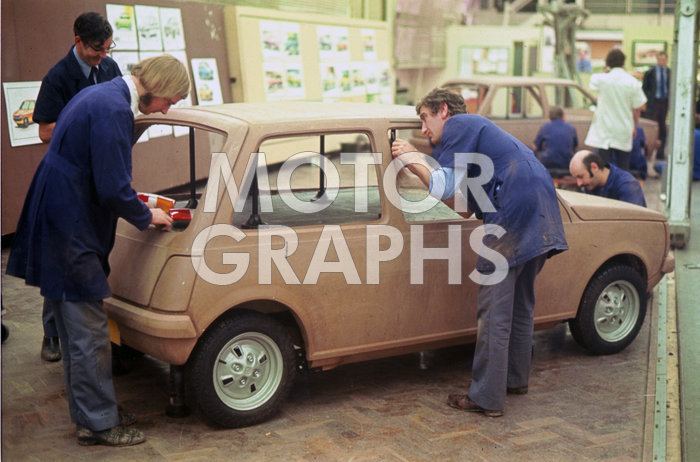 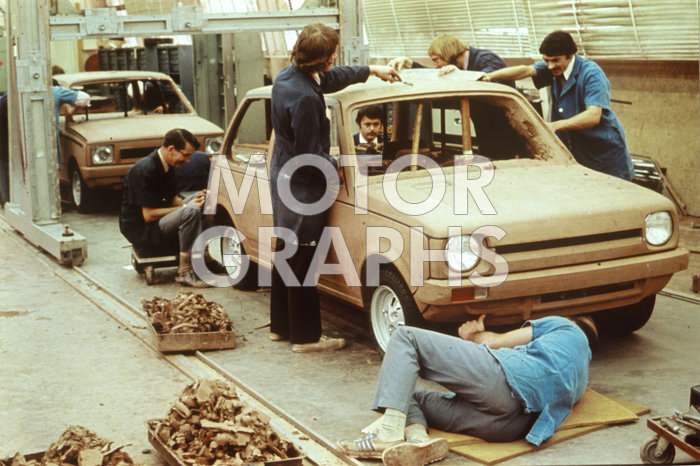 I think the front looks like a Reliant robin !!!

Admittingly the retro-ish ADO88 proposal could have done with more refining to include more Mini styling cues, that said had it been properly done it could have both anticipated the retro-style automobile trend of the 80s onwards, capitalized on the Mini's 1980s-1990s shift into a fashionable retro-cool icon as well as effectively replacing the Mini (whilst additionally adding scope for a viable K-Series update).

I think the Innocenti Mini Hatch looked better at the time.......

"In 1974, Leyland’s Italian subsidiary Innocenti introduced a rebodied, three-door hatchback Mini, styled by Bertone. However, within a year of its launch, BLMC went bankrupt, the company was sold to de Tomaso and the opportunity to sell the Innocenti Mini 90/120 in the UK was lost forever. Prior to the launch of the Austin Metro the Innocenti was briefly available in the UK, and it continued to be sold as part of BL’s range in many mainland European countries even after the Metro’s appearance."

It looks like they took a reliant robin drawing and sent it to the Lada design team to add the finesse! It would of never sold. The metro wasn't a bad looking car to start with and that is no improvement in my opinion.

Am not against the Innocenti Mini rebody by Bertone (notwithstanding the cost of the rebody and reduction in rear legroom), rather am interested in exploring the potential of a smaller Metro-based retro-styled Mini replacement on cost grounds (given the relation between both the Mini and Metro).

Comparisons with the Reliant Robin / Kitten aside, the retro-ish ADO88 proposal seems to be the closest the company got to carrying over Mini styling cues to the ADO88 / Metro. While the likes of Project Ant or Minki-II were slightly larger than the original Mini, the former reputedly sitting on an 84-inch wheelbase (translating to an approximate length of 124-inches) and the latter having its wheelbase / width increased by 2-inches (equating to a length of 122-inches and width of 57-inches).

Despite being one seemingly straightforward alternative to the retro-ish ADO88 proposal, it seems there was a reluctance to simply carry over a suitably modified Mini bodyshell on top of an ADO88-sized Metro-based SWB platform, due to concerns over how acceptable it would look when both Project Ant and Minki-II would imply the look was acceptable enough (especially in the case of the latter so long as the increase was in the doors).

Could the idea have worked with a modified Mini bodyshell on top of an ADO88-sized platform with a reputed length of some 126-inches (some 2-inches more compared to both Project Ant and a Mini saloon with Minivan wheelbase) and built on the same production line as the larger Metro? Or would further changes have been necessary to make it work? Given the Metro platform was smaller in ADO88 form, could it have been further down sized and mated to a suitably modified Mini bodystyle without preventing both from being built on the same production line?

That is compared to the costs of keeping the existing Mini in production or even to unrealised plans mentioned in page 151 from Mini: The Definitive History during the Metro project to both update as well as reduce the cost and labour intensiveness of building the Mini by making the floor in one piece, adding tumblehome and de-seaming which was costed to some £750k.

cracking wee rims on it.

I think the front looks like a Reliant robin !!!

JUst thinking the same or Rialto.

I have a 120. Collecting body panels. Got brakes/suspension parts sorted. Will be running a big cc 8 port.

cracking wee rims on it.

I think those were used on some of the later Innocenti models (Bertone bodied ones), should be Mini BCD so they should fit. 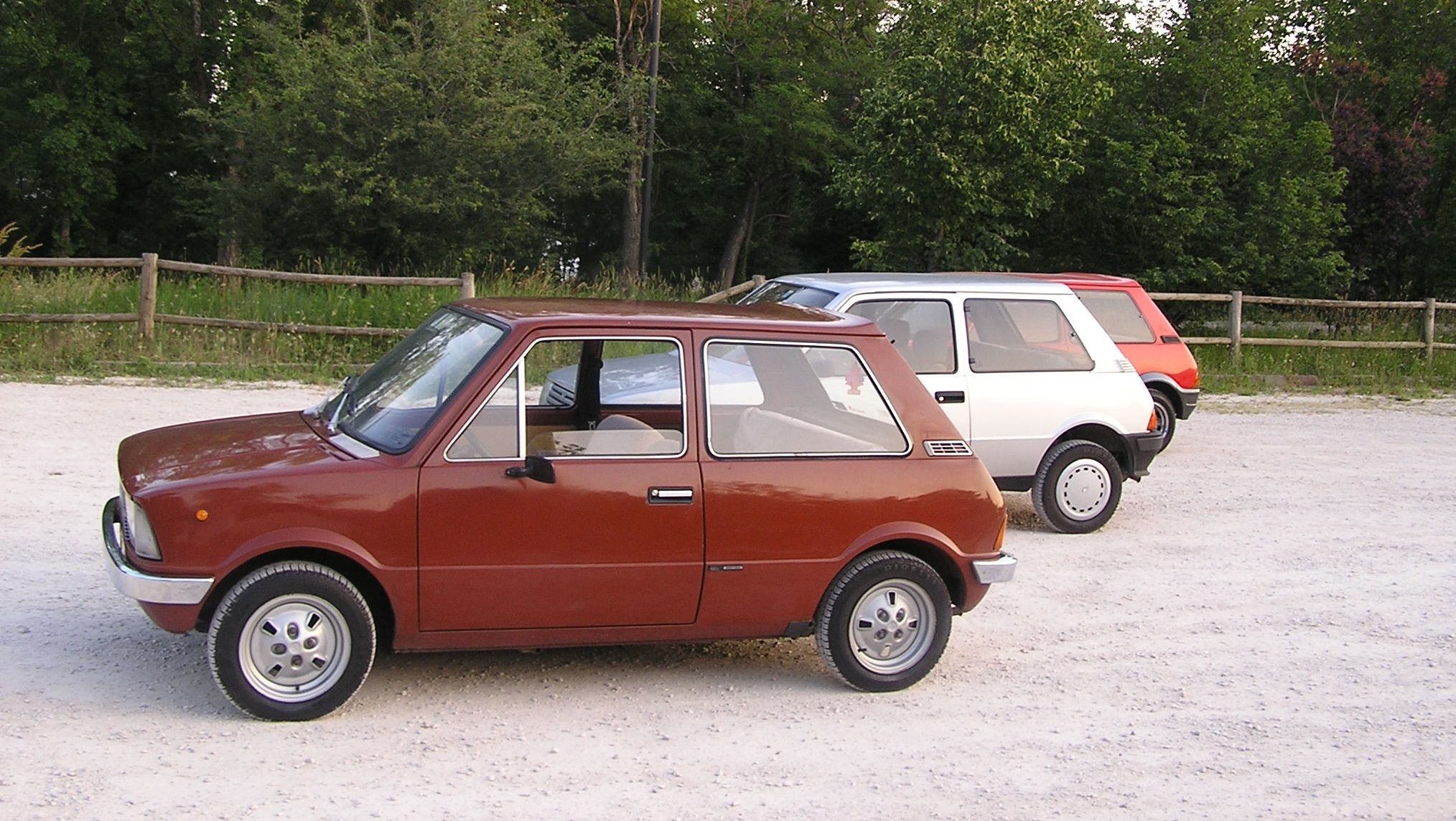