Two tour guides who were in the middle of an 'Italian Job' themed tourist trip round London were two of the heroes who came together yesterday to disarm the London Bridge attacker.

Thomas Gray and Stevie Hurst both work for 'Small Car Big City'. They were assisted by a bloke armed with a 5 foot Narwhal whale tusk and another man armed with a fire extinguisher....

Couple of the news reports on the 'Small Car Big City' heroes below:-

One of the heroes who tackled a knife-wielding terrorist after several people were stabbed near London Bridge said he just did "what any Londoner would do".

Thomas Gray, 24, was among a group of men who dragged the killer to the floor near Fishmongers' Hall on Friday, after the terrorist left two dead and several injured.

The 24-year-old, who is a tour firm manager, said he stamped on the terrorist's wrist to try to make him release one of two large knives he was carrying.

Mr Gray said: "I was brought up on rugby and the rule is 'one in, all in'. I did what any Londoner would do and tried to put a stop to it."

At the time of the attack, he had been driving northbound on London Bridge with his colleague Stevie, when they saw several people running towards the south of the bridge.

They immediately turned the car off and ran towards the attacker, who had been "wrestled" to the floor by "five or six other blokes".

Mr Gray said: "He had two knives on him, one in each hand, and it looked like they were taped to his hand".

"I stamped on his left wrist while someone else smacked his hand on the ground and kicked one of the knives away.

"I went to pick up the knife when I heard a cop say 'he has got a bomb'.

Stevie Hurst, 32, from north London, stopped his Mini Cooper on London Bridge and walked toward the attacker who was armed with a knife and wearing a hoax suicide vest

A tour guide has described how he bravely charged at the London Bridge attacker this afternoon.

Members of the public were able to tackle the terrorist and disarm him before he was shot dead by armed police.

Two people were stabbed to death before the attacker was subdued. A third person also stabbed is in a critical condition.

Stevie Hurst ran towards the terrorist and kicked him in the head.

The 32-year-old was driving a car for an Italian Job-inspired Mini Cooper tour of the capital when he stopped the engine on the river crossing and started his advance towards the suspect.

He told BBC 5 Live: "I felt compelled to jump out of the car and go and see what the situation was.

"We saw a guy being accosted to the floor. I obviously ran over there to investigate what was going on.

"The guys were just screaming he had stabbed a couple of women, I'm guessing from the bar, the fishmongers' bar?

"So everyone was on top of him trying to bundle him to the ground.

"We saw that the knife was still in his hand, he was covered in blood.

"I just put a foot in to try and kick him in the head, we were trying to do as much as we could to try and dislodge the knife from his hand so he wouldn't harm anyone else.

"The police were there within minutes which was incredible and they started to drag all of us off.

"As the police were dragging him off he rolls onto his back and that's when they screamed 'bomb'.

"We'd noticed he was wearing a bomb vest of some kind. He's got some kind of bomb device connected to him

"We've all stepped back, he tries to get up.

"The funny thing is when we were all kicking him and holding him to the ground he constantly was screaming 'get off me, get off me' as if we'd get off and let him do his thing."

He told the Telegraph "I was just trying to do as much as I could to get him to release the knife.  We wanted to make sure we got the knife away from him as quickly as possible.

"We wanted to kick him.  Everyone was shouting.

“The knife flew away. The moment they rolled him over off his chest, they saw he had a bomb vest.

"The police arrived so quickly.  They told us ‘get the f***back’, they had rifles. They put three rounds into him." 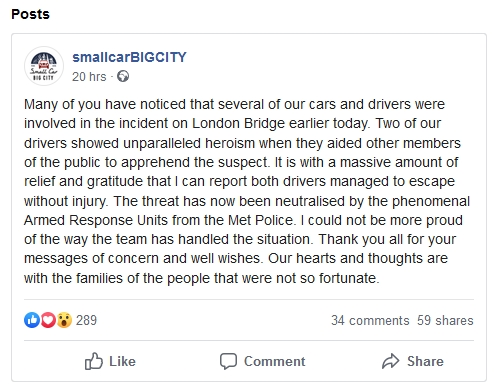