I was wondering who had a gear selector bias barrel fitted to their cars and what your opinions were on the mod?

never used one never fitted one but people like them and they do what they say once set up.

I tried one briefly and could see that it could be something nice, but to make it 'nice' you really need to do away with the Rubber Cotton Reel Shifter Mounts and go to something like a Slide Mount, so that the Shifter can move back and forth with the engine, but can't rotate at all.

I tried one briefly and could see that it could be something nice, but to make it 'nice' you really need to do away with the Rubber Cotton Reel Shifter Mounts and go to something like a Slide Mount, so that the Shifter can move back and forth with the engine, but can't rotate at all.

I'm not sure what a slide mount would look like?

I fitted the selector bias barrel this weekend and after a bit of tweaking, it definitely feels like the selector is a lot tighter.

Spider has some photos up in another topic somewhere. The selector needs to move with the engine as the reaction to the driveshafts rock it fore & aft. A trombone like arrangement in place of the standard rubber bobbins allows only that.

I agree remotes are slicker than rods, but they were an add on adaptation of the pudding stick mechanism. The rod change is a ground up redesign of the selector mechanism. I'm sure the main motive will have been cost saving. 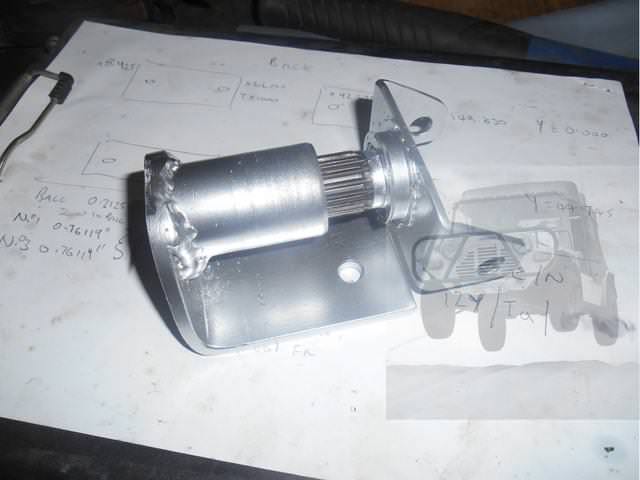 Thanks! That's a nice design by Moke_Spider. Might look out for a remote selector and diff housing when I rebuild a gearbox for the Mini.

Thanks! That's a nice design by Moke_Spider. Might look out for a remote selector and diff housing when I rebuild a gearbox for the Mini.

You mean a complete gear box casing with diff housing. They are matched pairs. Not to mention completely different castings.

Sorry I'm only just getting around to posting back here now.

There's 2 reasons I found as to why the Rod Shift feels more like a bowl of custard compared to the Remote Shift;-

2 - The Shape of the Detents used.

The Remote Shift IMO overall is a way worse shifter mechanism that the Rod Shift. There are a load more parts in them, all which wear, and actually makes shifting - theoretically - less precise than the Rod Shift can be. The Remote itself has 2 bushes inside it that do wear. While they can be replaced, they need to be reamed after and piloted to each other to ensure they are in-line, or line bored, which it seems, there very few firms who can do this. When these are worn, not only is the shift less precise, but on cruise, they are incredibly noisy - they buzz perfectly in tune with the harmonics of the engine. Many parts in the shift mechanism are also NLA and probably 50% of the time when shift is lost, it's internal in the gearbox, with a Shift Fork coming loose.

The Rod Shift mechanism is actually much more direct (in action, not feel) than the Remote Shift. All parts at this time are still available and all are easily replaced by the guy at home. In stock form, there are a couple of things that do let this set up down, with probably the biggest culprit being they are prone to leaking Oil from the Seal. Not only from the mess they make, but the oil runs over the Shift Rods. into the Coupling, that in turn, makes dirt stick, then the pins wear like crazy. Further back, the dirt wears the front bush in the shifter. First thing to do here of course is fit an Anti-leak kit and also fitting a boot over the coupling, that come down in front of it to the shaft (just be sure it's not thick) and also fitting a boot over the front end of the Shifter Mech, a Knuckle Joint Boot works well here. If shift is lost with the Rod Shifter, 9 999 999 times out of 10 000 000, it will be that a Pin has dropped out of the Coupling, which is a 5 minute road side fix. Here, to get around the issue of Pins wearing, I've fitted a Universal Joint.

Doing away with the Rubber Mounts, and as long as the rest of the Mech is in good order, will totally transform the feel of how the Rod Shift set up shifts. The slide Mount I've made here is a bit heavy for what it does, it's made from the splined parts from Drum Brakes. There's other ways of doing this, but what is needed is something that has next to no play, otherwise feel is lost and it will be noisy, but can slide smoothly. The other thing I've done just to make it more comfortable to dive is fit a 'Short Throw Shifter' (I think they are generally sold as a Quick Shifter). I know these come in for a bad rap and yes, they ca be horrible, but, only if the shifter parts are worn and I think too, again, doing away with the rubber mounts.

IMO, having now fitted both the Slide Mount and the Short Throw Shifter, it now has a better feel than the Remote set up.

I've also mentioned the Shape of the Detents. In the Remote set up, the Detents are distinctly V shaped, so as the ball and spring slide over these, they do have a 'hard' snap action. In the Rod Shift, they are Round in shape, so the Ball (with the spring) tends to roll in to the Detent much more gently.

It was infact the fitting of a Bias Barrel that got me to get my finger out and make the Slide Mount (an idea I'd had for years) as it made the shift feel way worse, but as I mentioned above, I could see where it was headed. I did have it in mind after fitting the Slide Mount and seeing if the idea was on the right track, to then re-fit the Bias Barrel, however, as it feel so good as it is, I haven't felt the need to try the Bias Barrel again.

Universal Joint rather than tool pins here too: http://www.theminifo...r/#entry3486868
Must be knocking on 10k miles now without a drip.