A special Hello to everyone who's helped me on my way in the past 2 years here.

@nicklouse gave the good suggestion to start a project thread on my car, so here we go.

This is Eleanor, an elegant name for an elegant, older lady.  She's my 62 Morris Mini-Minor.  I bought her in Chester, England in December, 2017.  She lived her whole life in Northern Ireland, where the previous owner, a retired professor from Ulster, believes she was the property of the government (possibly a mail vehicle), then owned by 2 more people before coming to the mother of the man I bought her from.  Their family called her Minnie after an actress on an old, British variety show, and the car lived on their farm amongst the chickens. 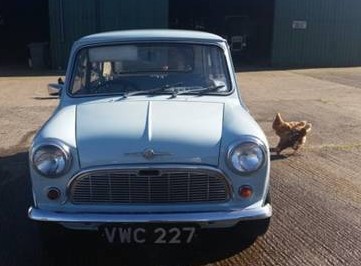 When I saw my car in person for the first time, I requested to be the passenger because driving on the opposite side of the road was a little too much for me.  But the real reason? I hadn't learned how to drive stick yet.

By the time I picked her up at the nearby port the following February, I'd watched a few YouTube videos on driving stick.  I practiced shifting while driving in circles for 2 or so minutes at the port, and that was that.  We hit the road.

I hope you guys stick around to watch Eleanor become the restored, California cruiser that she was meant to be.  I've got my next set of parts in the mail, so some updates and maybe a few build videos will come soon.

Awesome, awesome! Keep us updated with progress. Nice to see California minis. I consider the guys at Heritage Garage in Costa Mesa, family. There’s something about minis in California. I did some cool runs with Mini Owners of America Los Angeles blasting around in the sunshine and a Mini meet west in 2015 I think! Lots of friendly people and nice minis

I was expecting some two tone grey stripped mustang wannabe

Lovely car. Can’t wait to see what you do. Hopefully not too much. These early vehicles should be cosseted and kept fairly original, but it’s your car so carry on.

Did you see what the people behind the 'real' Eleanor did to B is for Build? Might want ask the mods to change the name of the thread

Seriously though, I look forward to seeing more of Minnie

Thanks for that! I've been wondering where there's a local, trustworthy mechanic!  I'm in Pasadena, and the OC seems as local as I could ask for :)

I consider the guys at Heritage Garage in Costa Mesa, family.