Excellent little thread to read. Your 850 looks smart....looking forward to your next update

Cheers. It's been about a year since I started working on it and it's coming together

Thanks, it's now almost looking like what I'd planned for it..

Thanks, I'm lucky it's not rusty like your one!

I've also picked up an HS4 carb. It's part of an eventual plan for some extractors and a (loud) exhaust.. I might pick up a working 998 for a home rebuild so I can set how it all works

I bought this for $6 delivered from eBay! I'm not sure if I will be using or not

The speedo has been broken for a few months. It started whirring loudly and the needle was bouncing around everywhere. After that the noise mostly stopped, and so did the needle and the odometer, so I took out the inner of the speedo cable to stop it whirring. It's been stopped at 70mph since then.

I pulled it out to have a closer look, and see what the sticker would look like.

The square drive in the back of the speedo only starts 5mm down, so I don't think the cable is engaging with it at all. I've lined up a replacement speedo so hopefully I'll get that soon.

We made it to our local show and shine on the weekend, I didn't get many photos though as I was helping out with the organising.. On the way there I noticed a bit of wheel bearing noise has returned so I'll need to check that out

Thanks! I'm really happy with the way it's looking now

The wheel bearing noise seemed to be coming only from the front left wheel. With the wheel off there was trails of grease coming from the studs.

The inside of the drum was caked in semi-solid grease/brake dust too.

With the drive flange off, the grease had formed an interesting spray pattern

It's gone all runny and ended up on the inside of the shoe and drum and all the way to the bottom ball joint.

And there is not much grease left on the ball bearings...

I got the replacement bearing in fine, but the wheel didn't spin very well when jacked up. It would only do about a 1/4 of a turn before stopping. The front left rubber cross universal joint was making a funny noise and it seemed to be a bit "notchy" so I pulled the rubber cross off. There wasn't much rubber left where the U-bolts go, which made it catch and not roll smoothly

Luckily grandpa never threw anything out...

Inside was a complete pair of the alternate driveshaft couplings

The black plastic end caps can be removed and reused onto a new universal joint. The joints are exactly the same as from a Triumph TR6, which meant they were easy to find. I did both sides at the front and they roll very nicely now!

My "New" speedo went in - I gained 20,000 miles! A new inner speedo cable was installed too, so hopefully it will work! At least the needle is in one piece so it looks nicer than before

Cheers, I'm lucky to have an early one!

I had some help on Sunday morning to bleed the front brake, and I adjusted the front drums too. I took it for a few laps of the block to check that everything was working fine, which ended up being a 30+ minute drive to "make sure" it was ok... It's good to be back driving it after a month in the garage

Yep, I do enjoy driving much more than fixing it!

My wheel bearing saga continues! It was the right front one this time though. I had been planning to replace it soon as I'd done the front left one a few weeks ago. It had started to grumble on our run the other day and the grease had gone all grey and sparkly and looked a bit like the left front drive flange...

When I installed the new driveshaft couplings the other day the left one went in easy, but it took me a while to get the right one all in and together as the plastic end caps weren't quite tight enough and were slipping. When I jacked up the car to check the wheel bearing I could see when I turned the wheel that the driveshaft was rolling off centre. This had probably accelerated the wear on the wheel bearing. In the photo you can see that the left side had pushed right in to the cup, and when it was connected to the driveshaft it was pulling away from the bearing centre.

I bought some washers to act as spacers inside the plastic caps. I needed just under 5mm, which ended up being exactly two washers and a 5c coin

Looks much better now, nice and even. It's perfectly centred now and can't wobble around at all. There is a tiny little jingle from the washers occasionally but I won't be able to hear it inside.

I've decided to change over to the tapered type wheel bearings on the front too while I've got it apart again which should be a better long term option. That will give me a chance to space out the left side too..

No not a croc! It's a blue-tongued lizard. I borrowed this photo from Wikipedia. They aren't dangerous at all, just their bite is similar to closing your hand in a car door.. 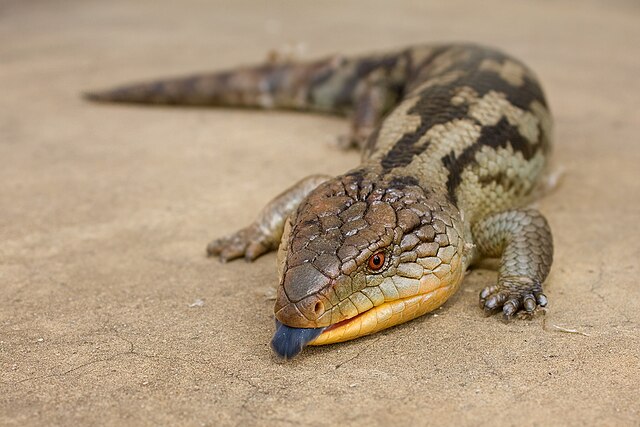 haha wow! i'm scared of a little mouse over here. couldnt handle those sort of things!

So after the right front bearing died I went to replace it. Unfortunately the bearing had worn the drive flange spacer, so I got a new pair. Here is the old and new side by side. They have a slightly different profile..

And it didn't fit on the drive flange very well

I was installing the new bearing shells into the hub, but they weren't a super tight fit. I installed one side, but when I flipped it over to install the other side the first side started to come out a little bit. This happened a few times so I gave up and bought some loctite. It set me back a day to get the front hub all back together, but all I've got to do now is torque up some nuts and deal with the brakes. I've got to swap over the left front bearing and give it a quick service before the yearly inspection before the end of April.
When I've been jacking up the front of the car I noticed it needed to be higher on the left side to get the wheel off the ground. The left side droop rubber bumper had totally disintegrated, and it had no rubber left on it. This is how good the right one looked compared to a new one...

And installed on the right side. The left side is waiting till I do the bearings on that side

With no rubber installed the wheel droops..

With a brand new rubber installed.