Is My Moke A Californian ?

Is my Moke a Californian ?

This is only intended to be a guide and is not complete in every detail.

I hear this question usually more than once a day.

Firstly, what is a ‘Californian’ Moke ?

Not something with a straight forward answer, but being Moke, none to complicated !

There was two separate releases of Californian models.

The second release was in 1977 and these ran to the end of Australian Production, officially December 1981.

In this range alone, there was 6 different types. They were all fairly similar. They had standard 4.5” wide, 13” wheels, no hub caps, a 1275 engine, Drum Brakes all round (yes, Drums !) and most had a rear fitted fuel tank with an empty cavity where the usual side tank is fitted.  There was an intention that some of these would be sold in to the Caribbean Islands and so gained a nick name of an ‘Export’ Moke. The body shells were also distinctly different in subtle but noticeable ways. They were also around 100 kgs heavier than any other Moke. Around 1 500 of this model were manufactured. 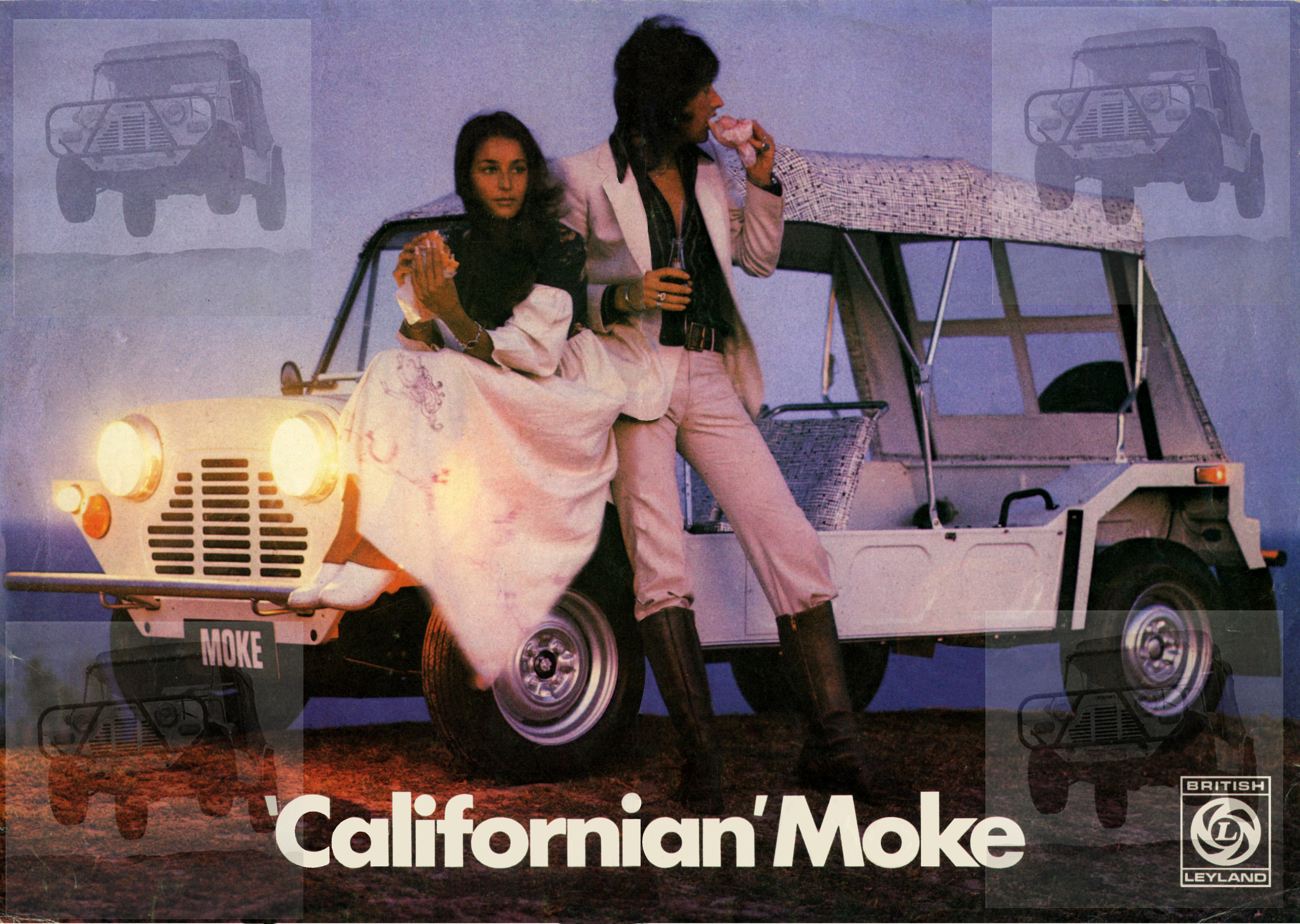 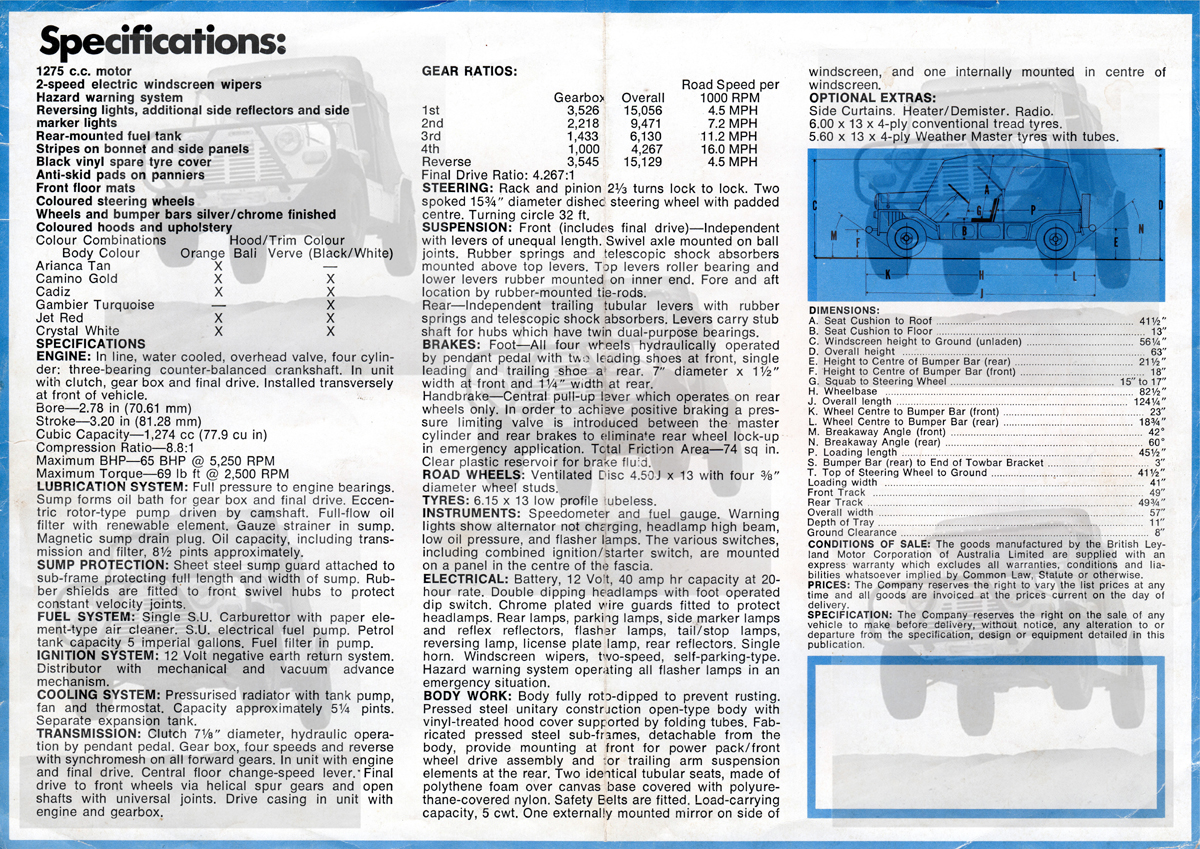 An original advertising brochure Note the 1275 engine and the drum brakes.

Essentially, these were only a Dress Pack for marketing. The bodies were unchanged and mechanically, identical to the standard model Moke. The changes done, included the Sunraiser style wheels, the Blue Denim look Vinyl for the hood and seats - speaking of seats, these were changed in style from the traditional 'sling back, beach chair' type to a full back and base type seat, though, they were on the same frame as the standard models, the distinctive Californian Front and Rear Bumper Bars, stickers on the bonnet and finally, a rear floor mat!

These only sported a 998 engine and Drum Brakes front and back. 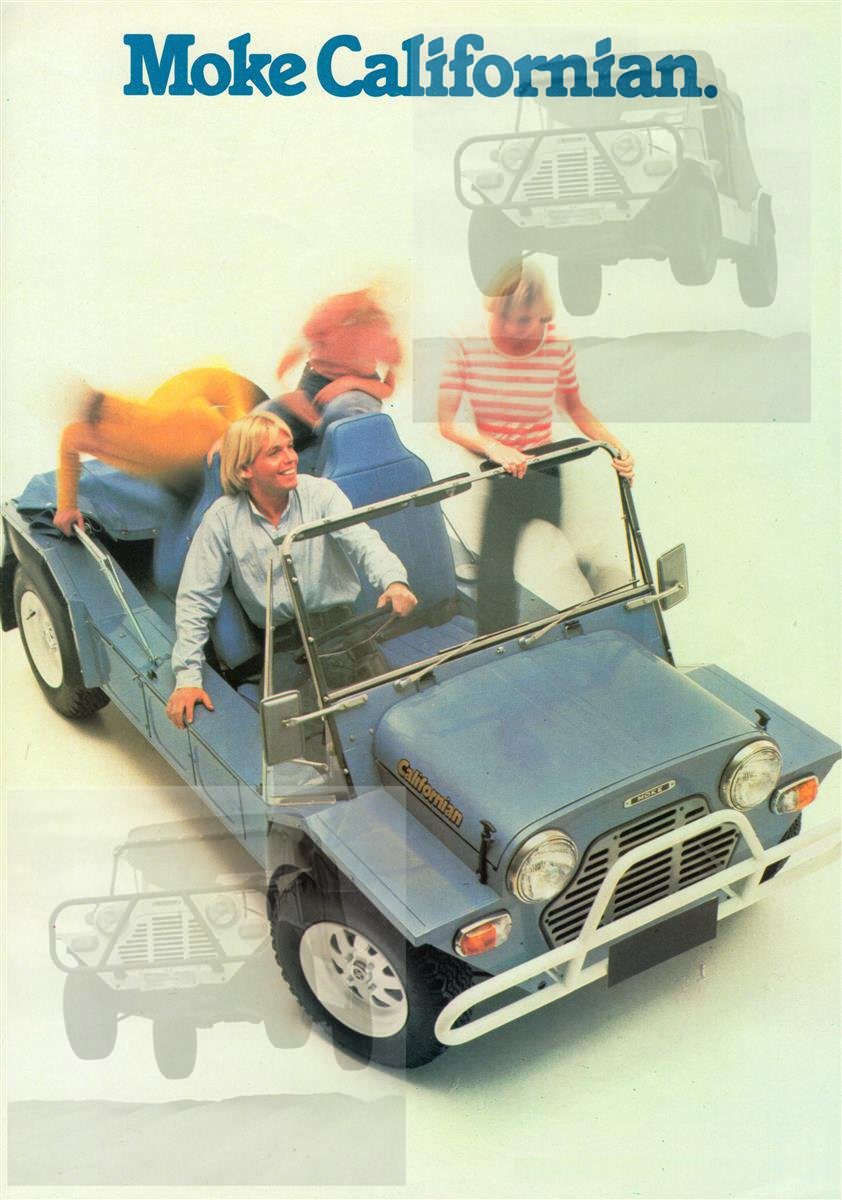 In 1978, a 1275 engine model was offered as an Option to the Standard Californian, the 998 was still the mainstream Californian model and this remained the situation to the end of production in December 1981. In addition to the 1275 engine, this model also sported unassisted Disc Brakes, but in all other aspects, was the same as the 998 Californian, though, there was a small change to the wheel design on both models so the 'spokes' of the wheels wouldn't foul on the disc brakes.

In November 1979, the 'Facelift' model Moke came in to production across all model Mokes. These had a very different body shell, while appearing the same as the models prior, there was few panels in common between them. They also had the 'galvanised' body shells, while not immune to rusting, certainly faired better than their older cousins. There were a few other mechanical changes to the models around this time too though only for convenience of production.

Is the Californian a rare model?

The 2.0 variety still seem to be as abundant as any other Moke.

Whether either of these are more valuable is a fairly subjective question, and from my observations, while they generally sell a little quicker than the standard model, they don't seem to command any better money. Equally, those with a 1275 engine also while selling a little quicker doesn't usually bring any extra in the pocket (or out of it!).

All Mokes are great.

How do I know if my Moke is a Californian ?

While any Moke can be made to look like a Californian, there is at least one reliable way to check.

Check the Body (Chassis) Number is easy enough. It's made up of an 'Identifier' which tells us what car and model it is and this is followed with a unique serial number that should only appear on your Moke only.

Starting with the early Californians, the Body Number will start with one of the following Identifiers (prefixes);-

The first 3 in this series being Left Hand Drive and the last 3 are Right Handers. These all had 1275 engines.

Can I modify my Moke to look like a late Californian ?

Yes. Just about all the parts needed are available new, in fact, there's very little for any model Moke that can't be bought new. About the only item that springs to mind that isn't available is the Denim look Vinyl and while a used one maybe tempting, by now, most will have faded badly, shrunk and gone crisper than that burnt toast you had for breakfast!  I'd suggest a newer top and seat coverings as they'll offer the most enjoyment.

Getting a little off the main topic here, I've always found the Moke's best feature, is also potentially it's worst. A rag top can be fun to zip about in, but if it's ill-fitting, flaps about and leaks, the zip will very quickly go from any fun factor. I'd suggest never to under-rate the protection and comfort that the top gives. Money and time invested here will pay dividends to enjoying the vehicle.