Most Obscure Mini Reference Ever...

Sorry probably totally uninteresting to 99.9% of the folks on here.

On the screen came a motorised toothpaste tube which I noticed had 10 inch wheels with mini trims. When there was an interior shot, it had a mini centre speedo and looked like the top dash rail of a mini - it was carrying the reg 470 VRA

although only 11 years after the start of production so not as rare then.

Wonder if this is parked at the back of some film lot rusting away - not sure who would take it on however the Outspan orange mini survived so I would suggest it would be no less interesting if it had survived.

Some screenshots 'Now and Then' from the film are on the Reel Streets website in link below:- 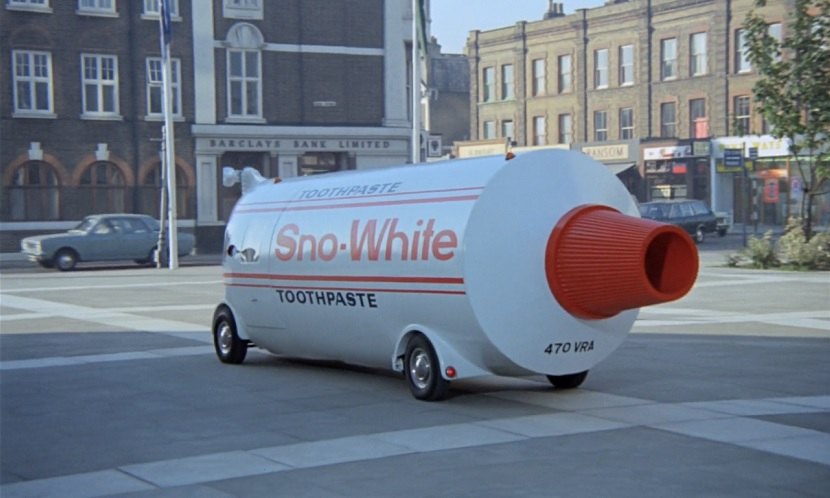 "Back in advertising land where a Toothpaste Tube pulls up outside Teddy's workplace.

Alan Field identifies this as St Georges Square (the forecourt of C. I. Tower),

on the corner of High Street and Dukes Avenue, New Malden, Surrey . . ."

Looks just the thing for squeezing through today's congested cities.

Not sure how road legal that would be now, certainly might result in a brush with the law.

Maybe its been painted with "enamel"

It was acci-"dental" that I happened to see this

(Sorry best tooth based puns I could think of)

Bet that bodywork took a lot of filling.