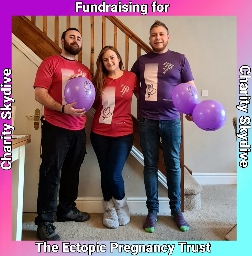 Sounds like nothing but very sorry for your loss,Steve..

Sounds like nothing but very sorry for your loss,Steve..

Thank you Steve, the loss is horrible and we hope will get easier in time.

However I am glad it was caught in time for my wife to be ok, until it happened we had no idea of the associated risks, being without my wife would be even more unbearable.

Thank you to everyone who has donated so far, it is really appreciated, we are just over 3/4 way to our £2000 target.

Not only that we were in the top 5% of all fundraising pages on Just Giving for January!

Sponsors are slowing down now so a cheeky bump to see if we can get it to our target.

Back to Chit Chat and Off Topic