upset things and more so as it wears

so high lift cam, ported head, stronger springs, lighter flywheel - it would be a pity if I have to drop a part of what I was trying to do

again thanks so much for sharing that

In view of the little info about balancing cranks I could find, here's a quick low-down on how one firm do it - this is Julian Escuret of Escuret Rectification in Montpellier, France, in action on my A+ 1275 crank. 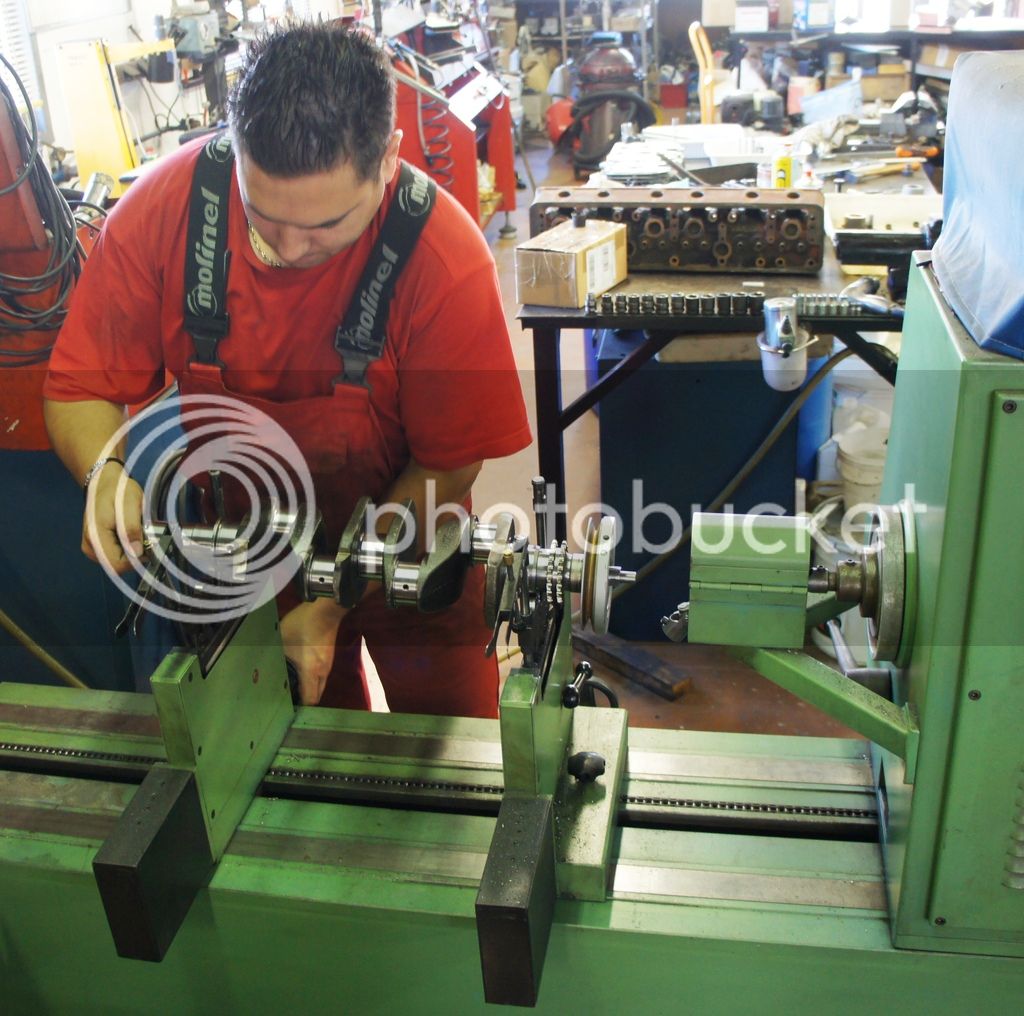 The crank is driven via a UJ bolt that replaces the Mini crank-damper bolt, and initially without any flywheel/clutch.

You start at 450 and balance the crank on the LH and RH ends (there are two "soft" or "floating" bearing carriers), then go up to 900 and carry out the same procedure, then 1400 and repeat.

The idea is that each speed throws up different harmonics and if you can balance out all the wobbles at all 3 speeds then you're on your way to a better engine ; don't ask me why it doesn't run at 8.000 rpm - probably because the electronics can't cope, and if the crank flew off the supports it would kill someone whereas at 1400 you only lose an arm and the workshop window.

The read-outs show current angular crank position, and the "imbalance" measured and the angle at which it occurs. 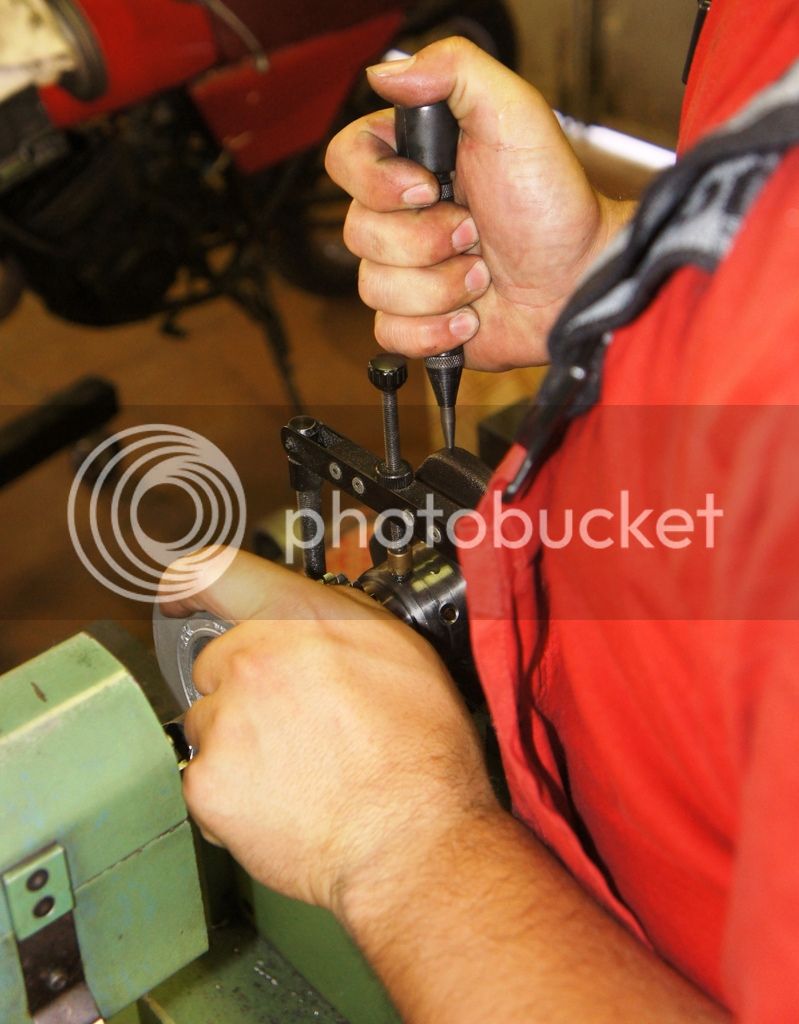 You then drill out a certain amount of metal at the given angular position - ie : automatic centre-punch followed by - in our case - a 5mm bit in an air-drill.

The depth of the hole is a seat-of-the-pants judgement by the operator, based on what radius he's drilling at (flywheel webs are of varying section) and how big the number on the top line is that he's trying to correct.

Julian never over-shot his drilling and took at most 3 stabs at the hole to chase the imbalance figure down to zero.

After some hole-drilling, we get :

Bit more drilling to get this :

Both LH and RH down to zero.

and now we see we need :

Once we were happy with just the crank, I built up the Primary Gear, washers, circlips etc and fitted the Flywheel, Cluch Back-Plate, INCLUDING the Back-Plate and all the (numbered and marked) straps and bolts and spacers, all bolted-up with the flywheel bolt and stepped washer.

Now this is likely to raise a few screams, and I'll be interested to hear the reasoning - as long as you understand what follows.

The Back-Plate has the potential (1.77kg here) to be fitted in various positions that can be at least 0.2mm between each other, which (1770 divided by 0.2) is 350 gramme.mm of imbalance, so I prefer to centre it as best I can using feeler guages and believe that by NOT subsequently removing the strap-to-flywheel bolts and by using the feeler-gauages again I can build back up the flywheel and clutch assembly to that same position when I assemble the engine definitively. The best we could get was 1.05, 1.10, and 1.15 - but bear in mind these are repeatable gaps.

The idea that the clutch plate "never ends up in the same position" is true, but a) it weighs bugger all, b) it's industrially manufactured from symmetrical and regular identical parts, c) it's of a relatively small diameter, and d) any wear it suffers will be symmetrical.

So I believe including it in the balancing can never be more inaccurate than the balancing would have been without it (think about it ?) - and its presence enables you to clamp the back-plate (fat, heavy, big diameter) accurately and firmly in the position in which it will be running when the engine is running.

The flywheel had already been balanced by itself, by the supplier, and the small tweak seen here that was required to finalise the balancing of the complete crank/flywheel/clutch assembly would seem to confirm that the back-plate cannot be assumed to have no effect on the flywheel/clutch balance.

What was most noticeable, and Julian confirmed this, was that as the crank got better and better balanced, it took longer and longer to slow down after being spun on the machine. 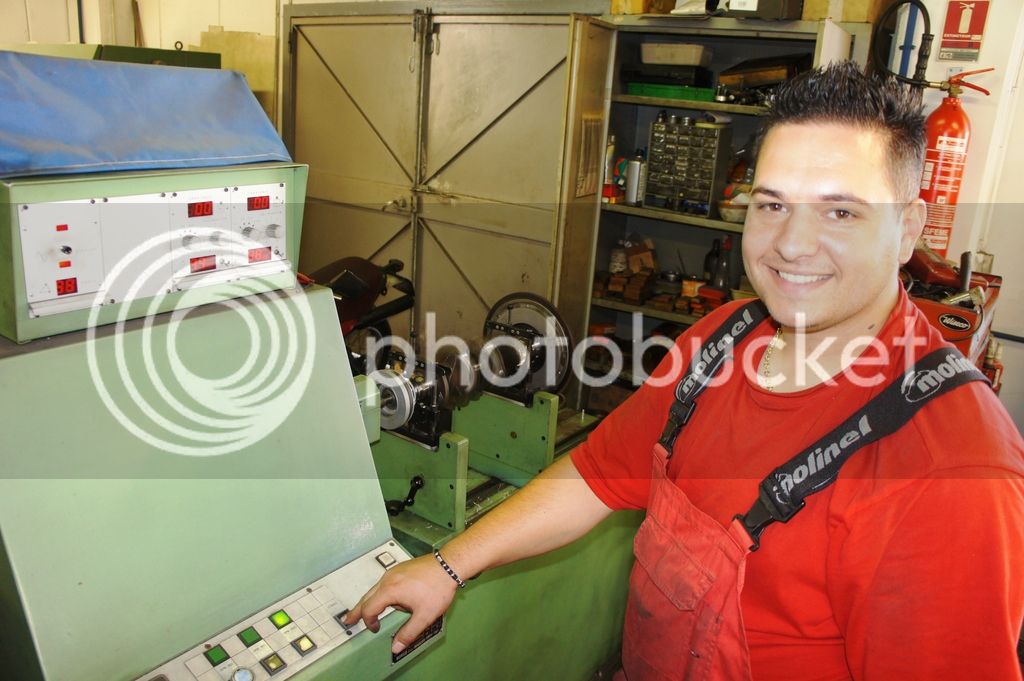 Here you can see the finished crank complete with all the clutch components spinning at 1.400 rpm, with all the imbalances shown at zero - this is as good as you can get on this machine.

Plus the guy who does the work gets to look happy with what he has done !

woooooooooooow that is a beautiful picture story

machine made by the Swiiss can't go wrong there

and an experienced operator

I am very pleased for you and thanks for showing how it should and can be done :)

I noticed that you have two quite good dimples in the harmonic balancer - so that is balanced as well !

In one way I am fortunate as the SPI flywheel and clutch always go back in exactly the same position - there are 2 dowel pins to this effect. 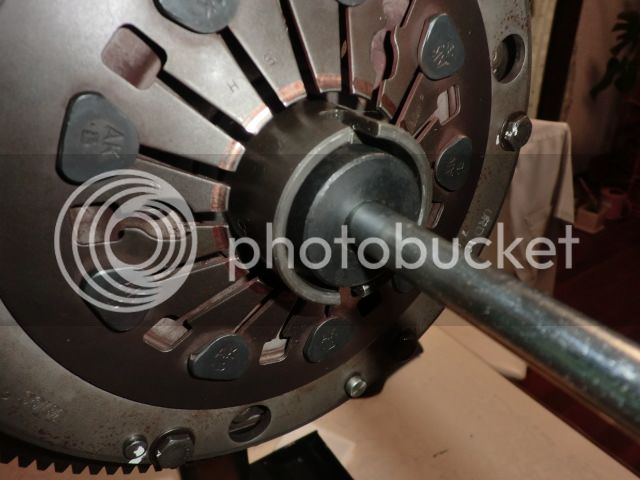