The Beast From The East


33 replies to this topic

So! Little backstory to begin with. Here is my 1983 mini city e automatic the night i bought it just over a year ago, for a whopping £350 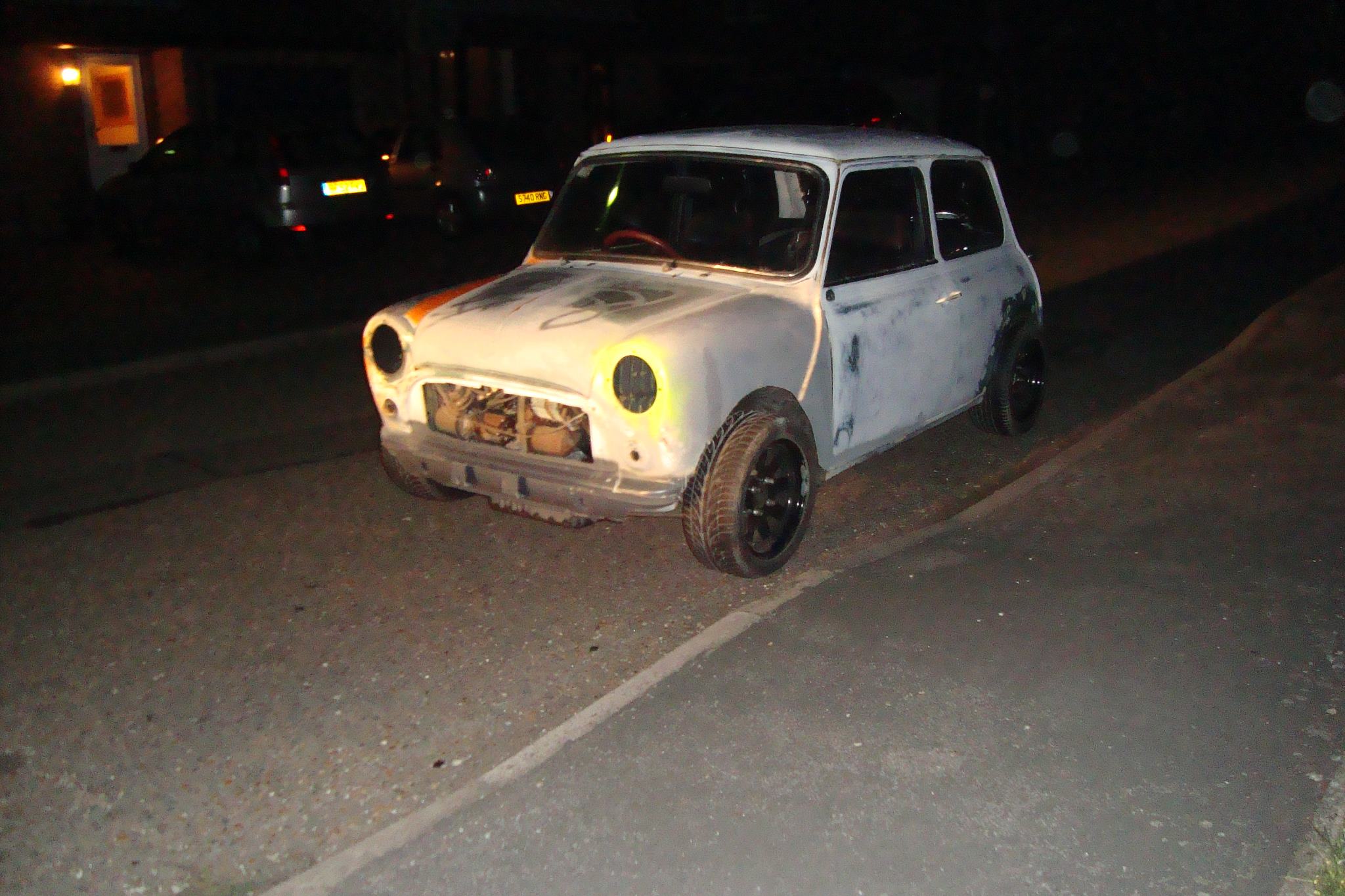 It then got a very minor 'restoration' (and i use that word lightly..). If anything, it got bodged up to get through an MOT, rattle can paint and cut out the rust and welded in patches. 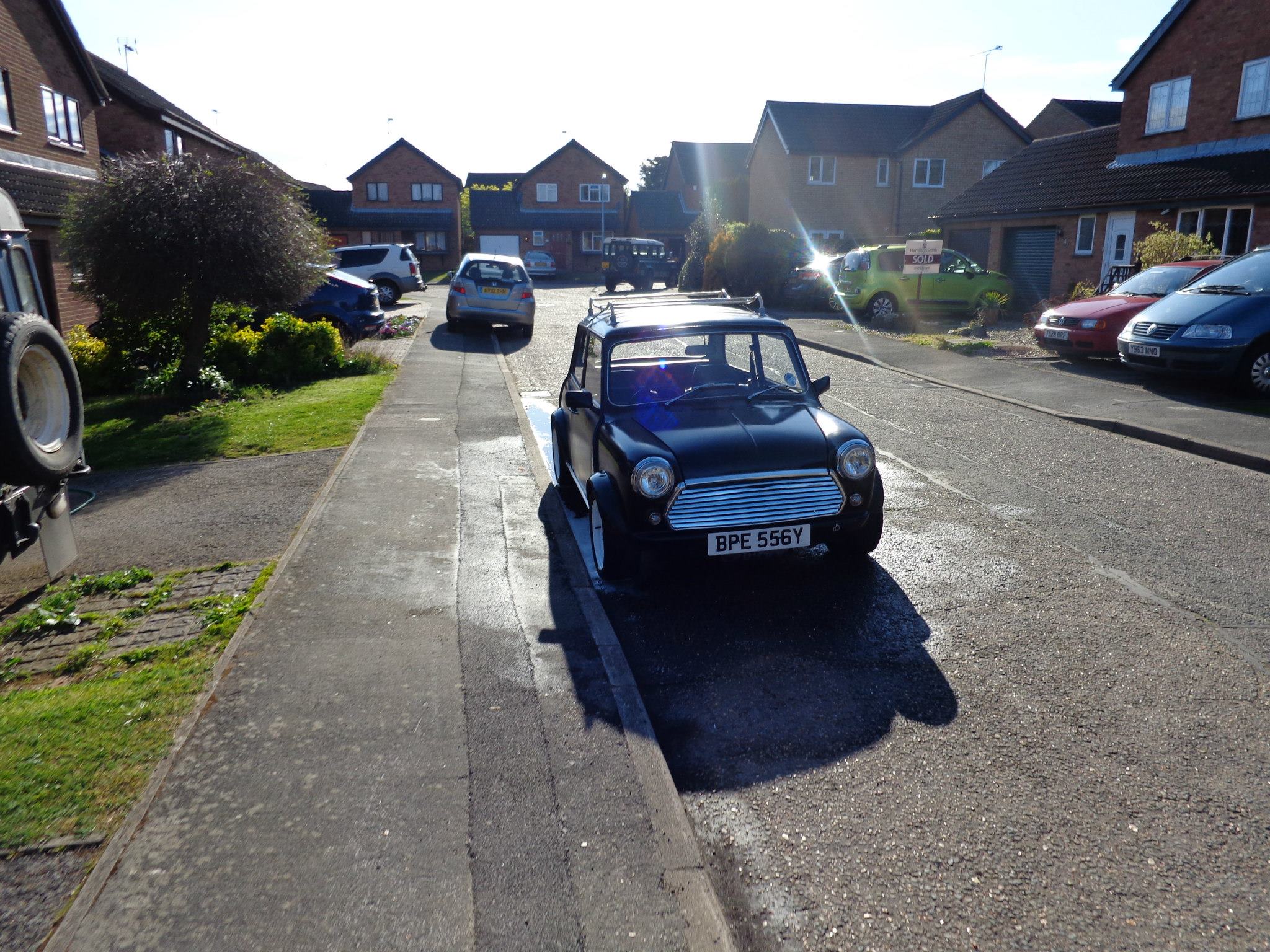 I drove it like this for over a year, and a month or 2 ago, it gave up the ghost. It broke down at a friends house, we fixed it and it broke down 2 days later at a local farm. Luckily we keep our horse there so the farm owner let me keep it in his barn. He then let me know the barn was being converted into storage bins and i could use one as a workshop. AT this point i decided i'd give the mini a full on restoration and start something i've always wanted to do! a vtec conversion! So when a 2000 honda accord 1.8 vtec s came up for sale local to me for a decent price, i bit his hand off and bought my donor car! The mini has been partially stripped and both the mini, and the honda are now waiting outside the barn, eagerly awaiting the move once the barn is finished. For this reason there wont be much progress early on as i cannot work on the cars, but i thought i'd start this project thread to motivate me even further! Here is some pictures from the day it broke down, aftermath of the minor stripdown, and finally the donor honda and mini sitting together! 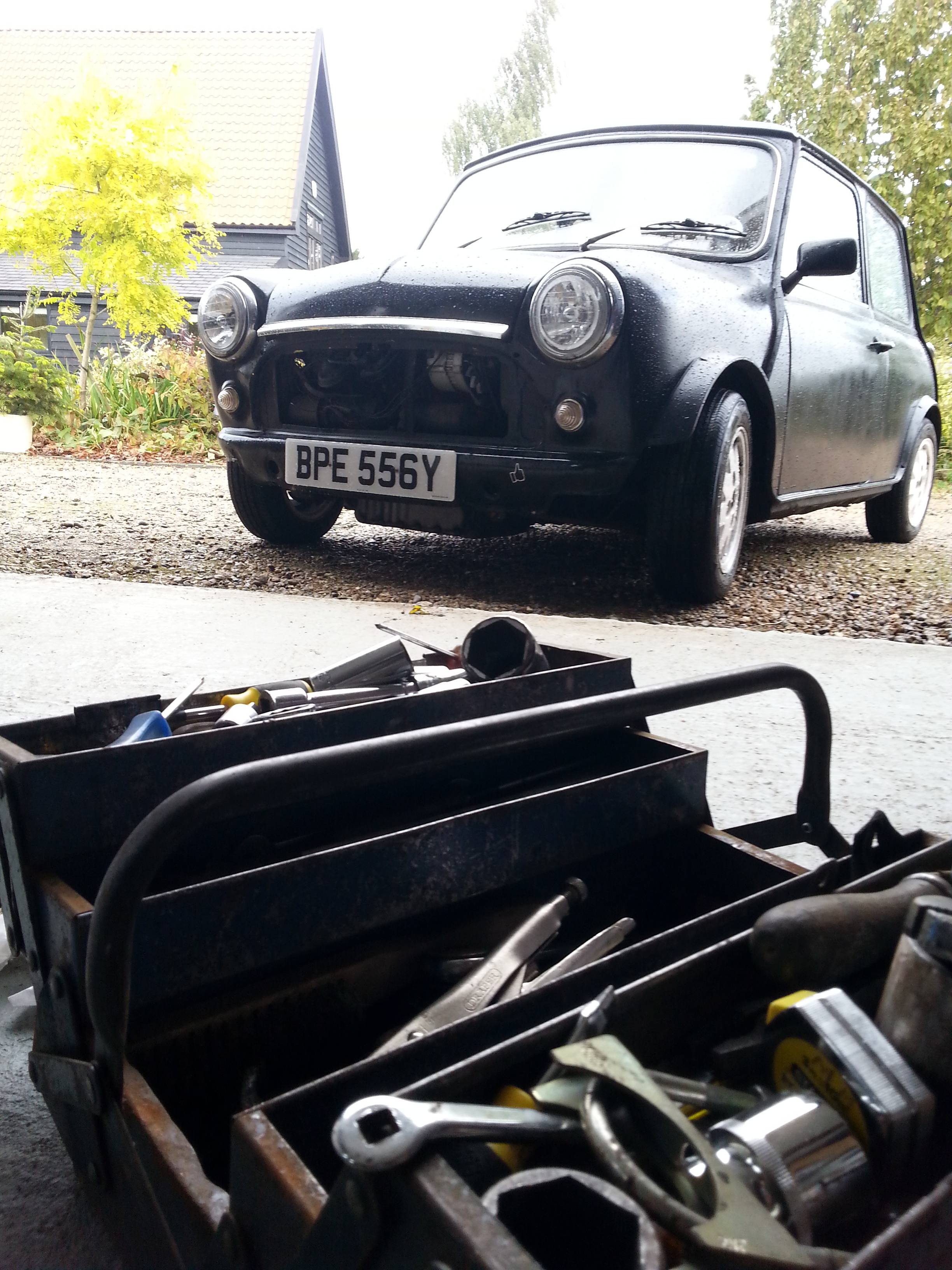 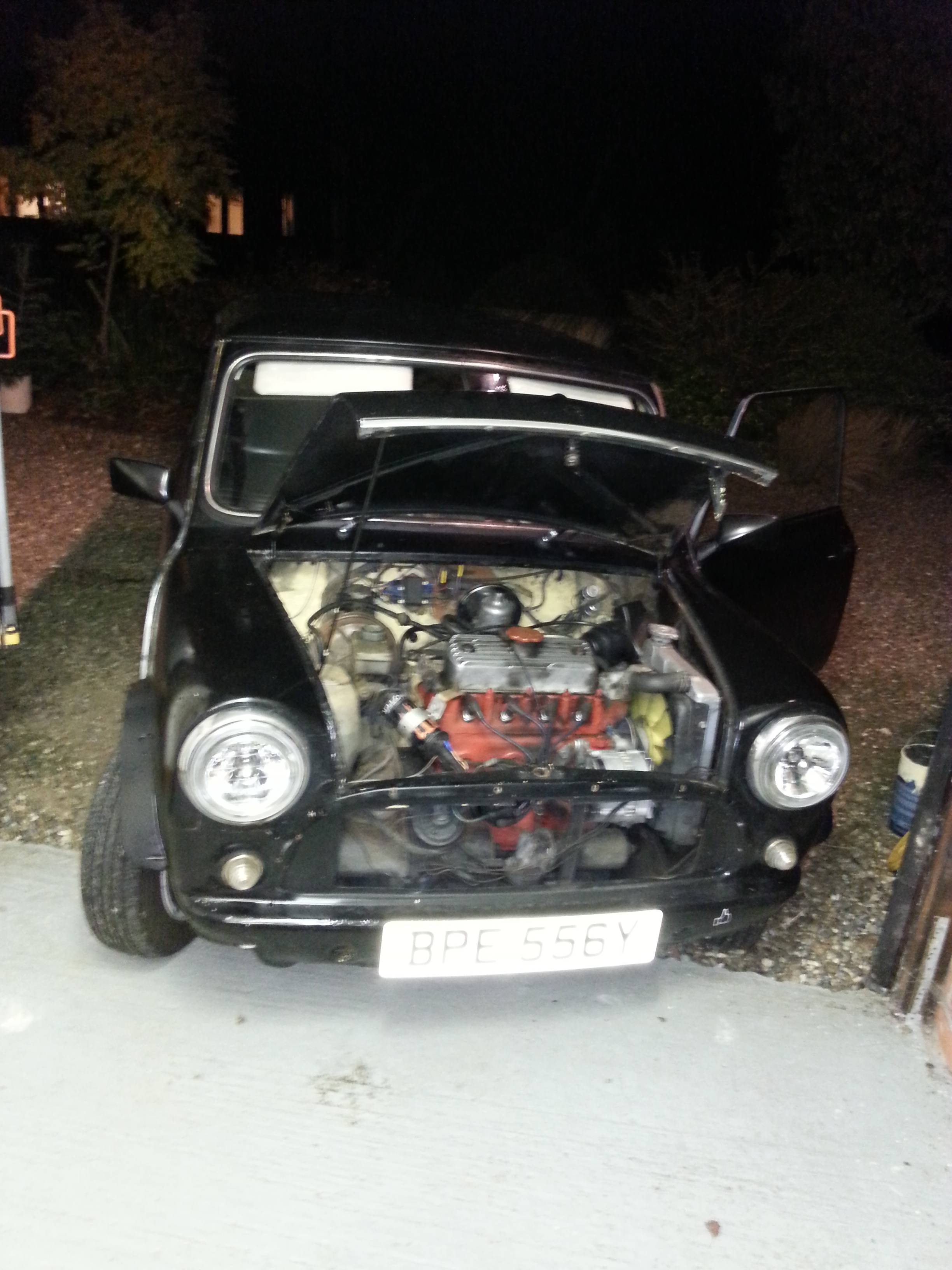 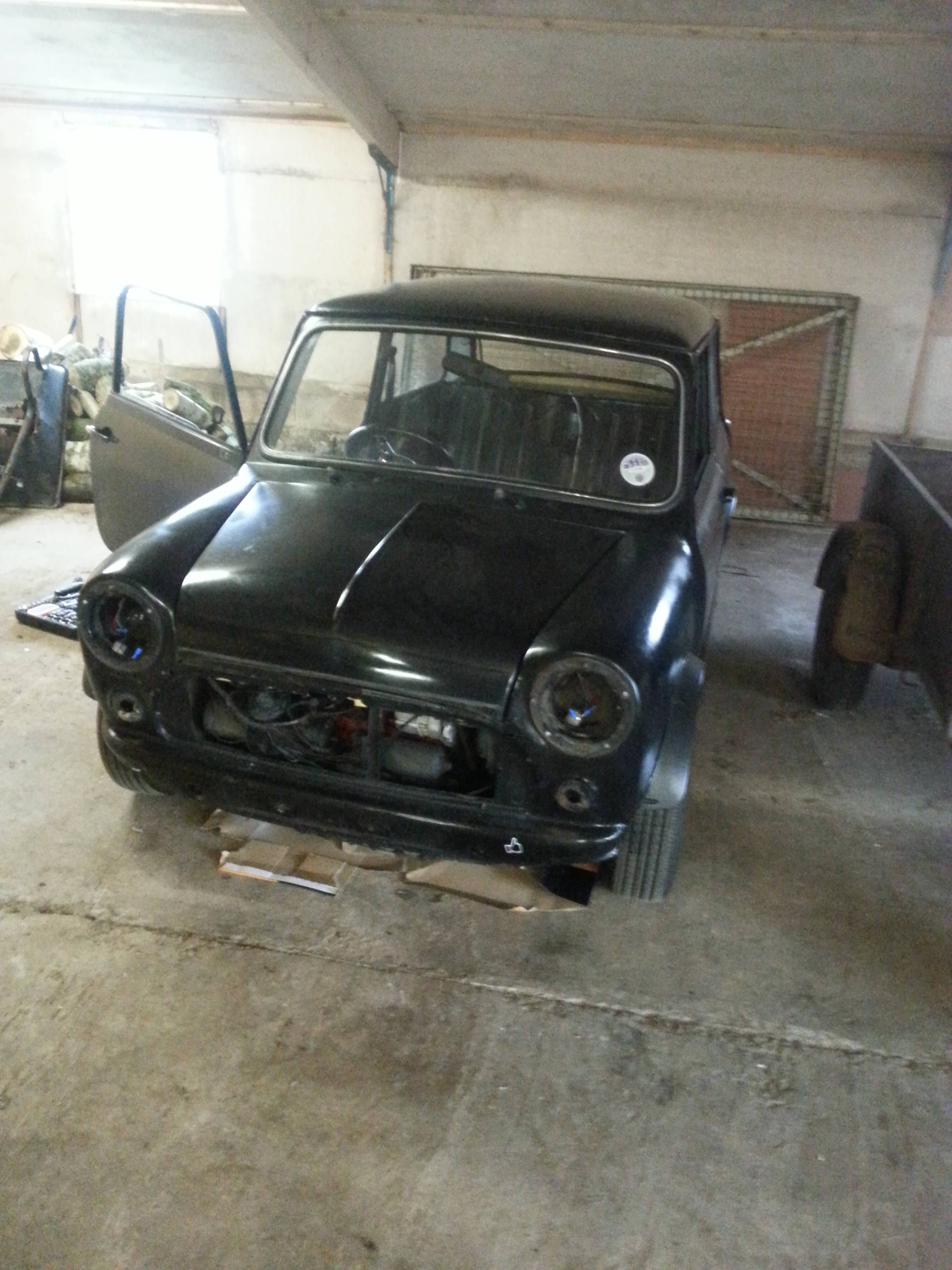 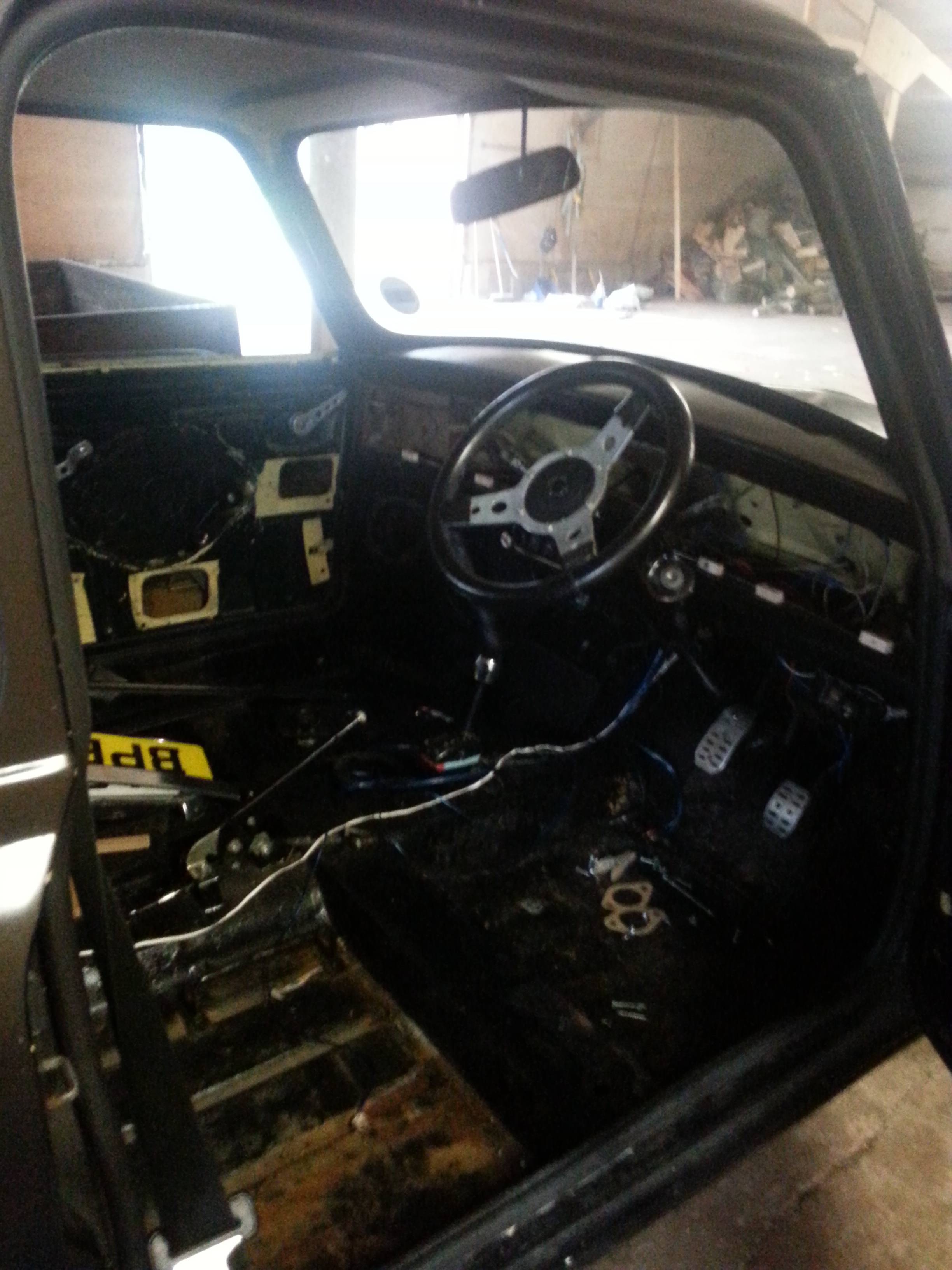 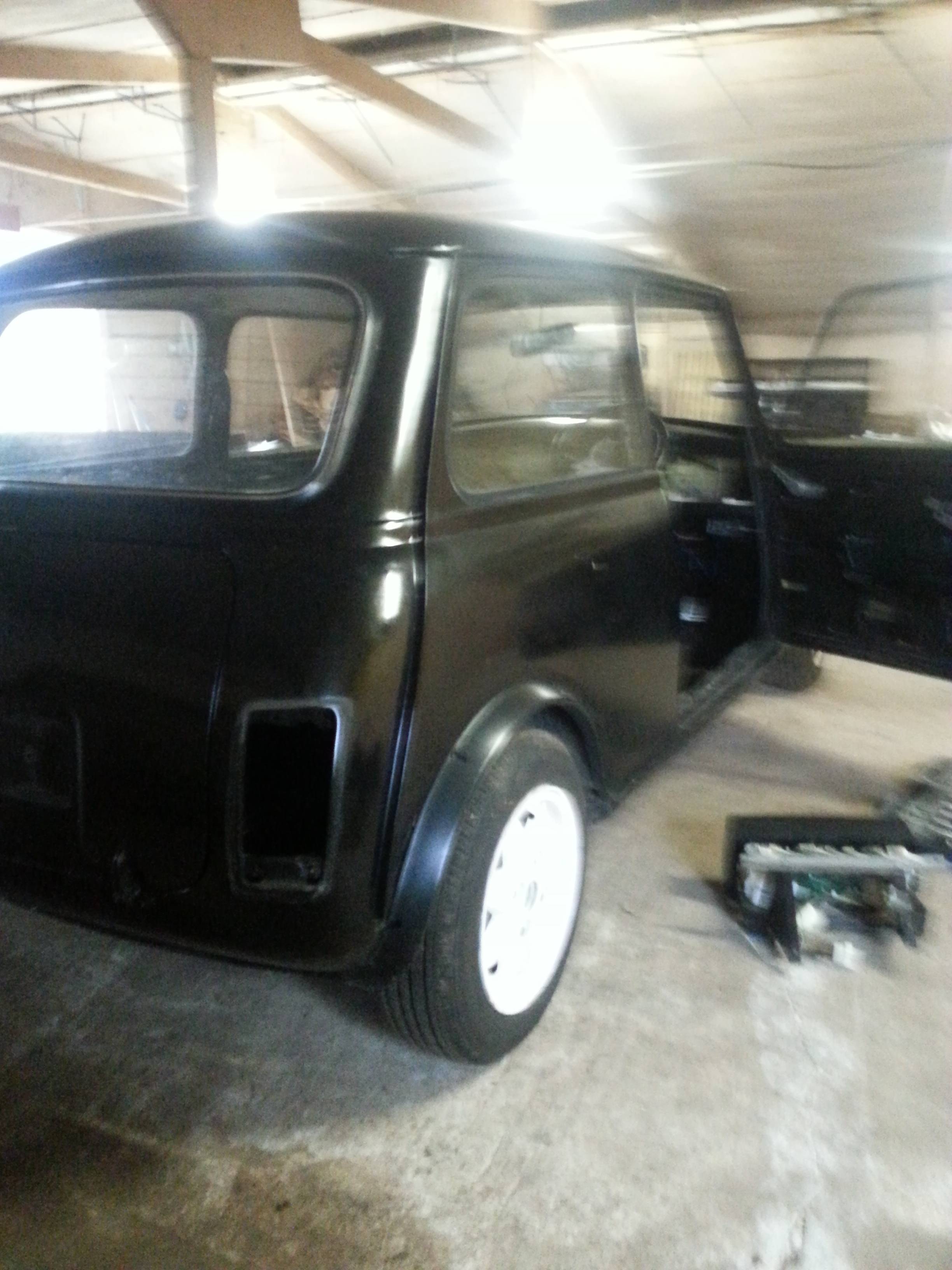 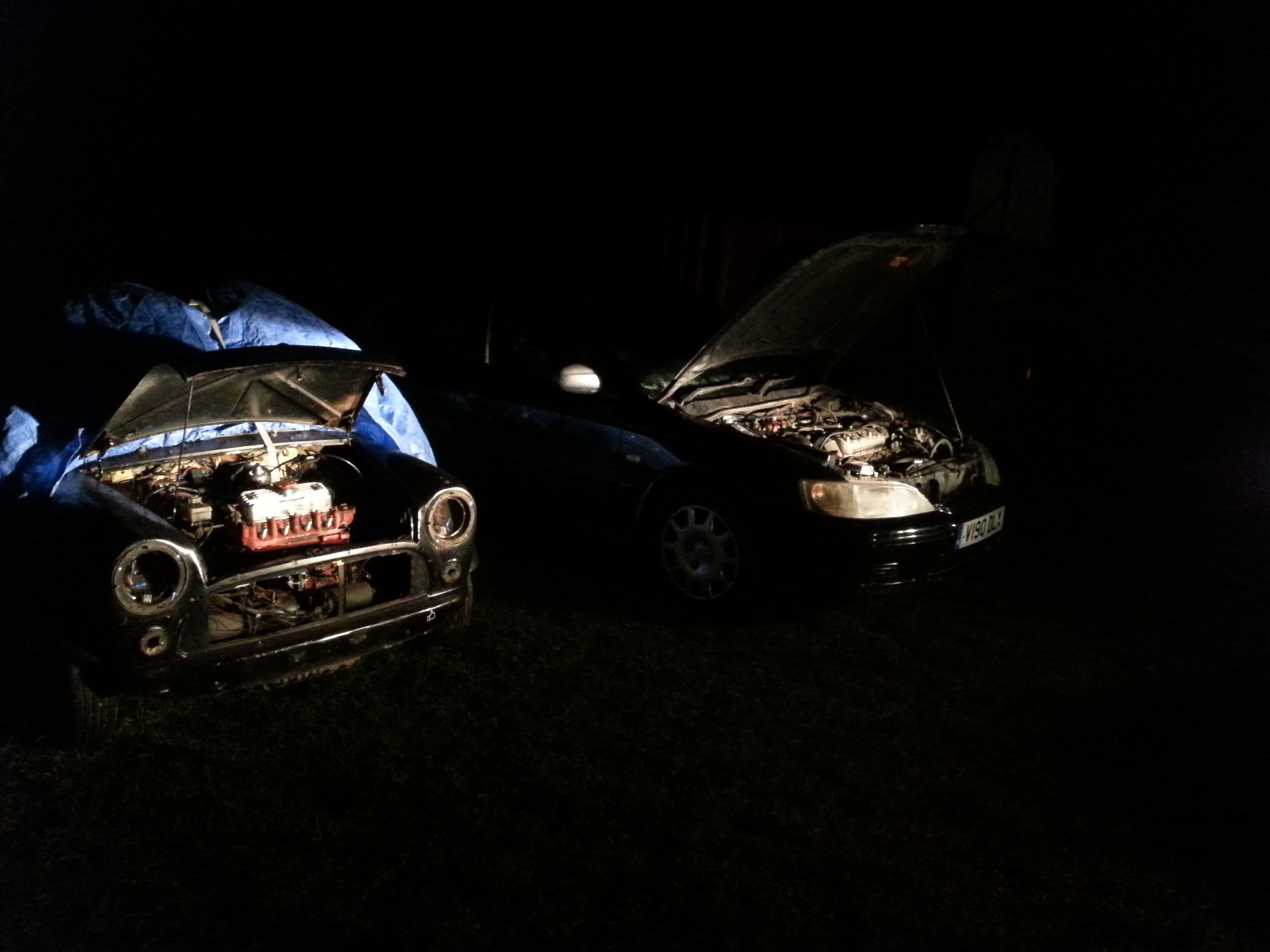 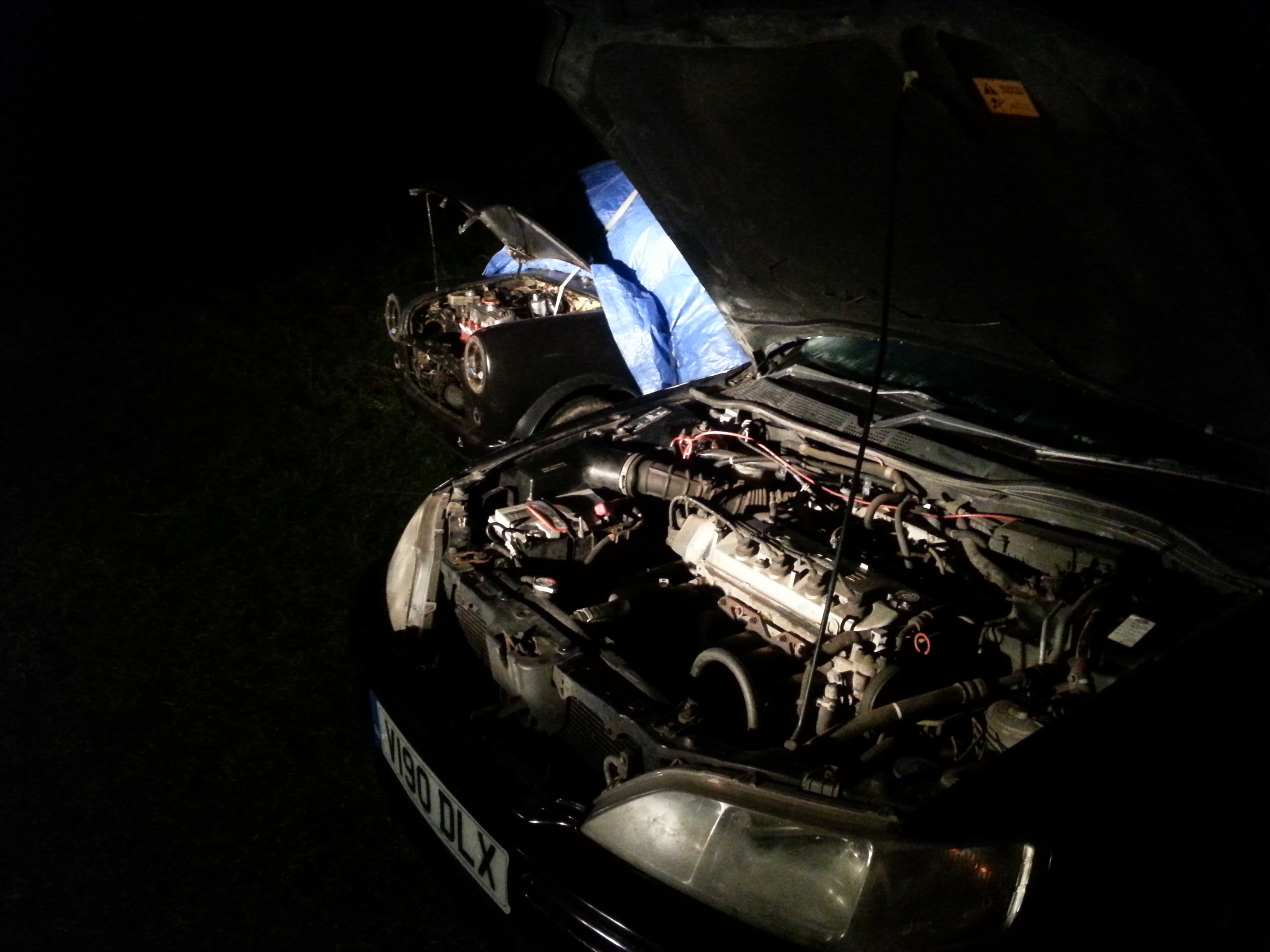 Looks good that's not a regular engine for this type of conversion so what what you going with or are you making your own?

Nobody makes a F-series subframe as far as i'm aware, i need to do some more research into it, but my plan was to use the blank vtec subframe from allspeedengineering and weld on the mounts in the right place. If for some reason this can't happen, i'll have to look into building my own frame or finding a fabricator to make one for me

There has been alot of waiting around for this project to begin, a lack of an income and a lack of a finished working area are the main reasons for this

However i have managed to get some work done on the mini. I'm training to become a mechanic currently, and i am trying to get into an apprenticeship atm so i decided to buy some nice tools.

Here are some of the worst areas on the car. The car also has oversills and there are holes under the rubber door seals so i'm expecting alot of cutting and welding in the near future.

I'm hoping it isn't as bad as it looks but this is going to be a long term project so i'm not too worried to be honest! This is going to be a learning curve for me and it will let me test and practice my newly learned skills. Me and my friend were discussing the option to get the shell sandblasted, does anybody have any experience with this? I feel like the shell would have to be braced or the worst of the rust fixed before it went to get sandblasted so I don't risk my shell becoming warped or twisted?

Oh and here is a better picture of the engine. It doesn't look amazing but it runs sweet as a nut and sounds so strong, I'm really happy with it.

Bought an engine crane... assembled it and had it up whilst we were getting the driveshafts out, and i noticed it wasnt as high up as i had left it. It has a leak where the pump is so it very slowly goes down over the course of hours, which at the moment isn't a problem as it holds weight easily enough, however since it's leaking it'll eventually not work at all. Luckily i have a warranty on it and i am going to contact the people i bought it off soon enough... Anyway here's a bit of a milestone update ;)

Brackets made and chains attached

Well chuffed with todays progress, going back tomorrow to get the front subframe out, as i have sold the engine, subframe and driveshafts to my college that i have just left!

Pppppprogress! Started my apprenticeship at marshalls kia and it's bloody fantastic! The new kias are so different from the older blander cars, A new designer from audi helped a bit i think! Anyway i had the urge to go up the farm with a grinder and attack the mini today. And that is exactly what i did! I was being constructive i swear...

Left a couple of mm around the edges so i can trim it back at another time, i just wanted the bulk of the front end off!

Now's when the fun begins!

Great project Andy ....take a look at http://www.16vminiclub.com and if you have not joined already do so .... loads of helpful advice from loads of VTEC heads, currently a nice thread running on subframe desgins ...may help in forming your thoughts.

Now's when the fun begins!

Nope! now comes the frustrating bit where i save up money whilst fixing the rust :L stupid apprentice minimum wage... grumble grumble...

Great project Andy ....take a look at http://www.16vminiclub.com and if you have not joined already do so .... loads of helpful advice from loads of VTEC heads, currently a nice thread running on subframe desgins ...may help in forming your thoughts.

Thankyou! I've always wanted to sign up on 16vminiclub, i think i will now, to be honest never looked on it and didn't realise there was conversions on there...but thinking about it... the name now makes alot more sense to me

. I'm pretty sure i'm going to be buying the blank vtec subframe from allspeedengineering, and marking where the mounts need to be welded and welding them on.

Have a look at some of the Honda build threads - i'm sure someone has fitted your engine before, post a message and you will get tons of assistance.

Don't worry about your shell - looks great in comparison to the one i started with last time.  Beg and borrow, somebody is always willing to help out and you don't need tons of cash, just tons of enthusiasm;-)

And you cant get a better apprenticeship than building your own 16 valver - my Suzuki 16V G13B still puts a smile on my face every-time I thrash it to it's 8K redline and that's every-time i drive it.

Have a look at some of the Honda build threads - i'm sure someone has fitted your engine before, post a message and you will get tons of assistance.

Don't worry about your shell - looks great in comparison to the one i started with last time.  Beg and borrow, somebody is always willing to help out and you don't need tons of cash, just tons of enthusiasm;-)

And you cant get a better apprenticeship than building your own 16 valver - my Suzuki 16V G13B still puts a smile on my face every-time I thrash it to it's 8K redline and that's every-time i drive it.

I'm planning to have it done by the end of my apprenticeship so i can use it as a daily, i have a nice little 10 mile commute down the dual carriage way to and from work atm, and i'm sure it'd love that little drive

cannot wait for it to be finished. I am very determined i just need some advice on somethings that have been puzzling me

i will definitely check out some build threads for some ideas/help. Thanks dom! Honestly the shell isn't too bad. Needs a few patches (under the windscreen on the scuttle and in the rear windows)... new sills as it has rusty oversills, and the odd fix here and there. Shouldn't be too hard and should be alot of fun!

Oh and i'm proud to add, my mini will now have 16 valves

Decided to strip the front brakes and clean them up a bit, pretty sure i will be reusing these as they were very good with the servo, It was exciting finding part numbers and company names on the hub, it was covered by a good few mm of grease and dirt...

Nice project will be watching this

Decided to finish cleaning and painting my brakes a few weeks back, the calipers have been repainted in red, and the hubs and backplates in black. I have bought the balljoint kit but will hold off on putting it all together as the brakes will be off the car for quite some time so i'd rather not let the grease dry up.

I removed the door to get a better look at the rusty side of the car, i also received my new panels and it was exciting to see how it will all look when the rot is gone.

I also had a crack at some practice welds, and i think i need alot more practice and alot more tweaking with the welder before i go near the car! I got a quote to get the shell sandblasted which i was very happy with so will be following this up as soon as the rear subframe and the rest of the car is stripped down.  I think this will be good as i will know for sure that all the rust and filler has gone as i know there will be quite alot in this shell.

Got bored one night and in the spur of the moment grabbed my tools, headed up to the barn and got the rear subframe out! I am so glad the car broke down now... this thing isn't the most structually sound vehicle out there... Doubt it would of been very strong in an incident! Need to remove the remaining door, glass and headlining then he's off to the sandblaster... Where hopefully he won't turn into a big pile of rusty metal pieces :s