As a few of you have seen, I've built a new Mini Miglia for the Mini Seven Championship. I will be keeping up to date with how I get on this season.

I'm testing at Castle Combe Thursday and racing there on Monday for the first round of the championship.

I'll keep you posted on how it goes!

looking spot on, im heading to Combe on Monday so will try and get some pictures of you out on the track. Good luck over the weekend by the way :)

We had an intesting first meeting of racing a miglia at Combe on Monday. In qualified 13th cause on done 3 laps then broke the gear linkage. Fitted a new linkage and had no 3rd or 4th. So popped the engine out and removed the diff the check inside the box and nothing appeared to be wrong which was confusing. Anyway it all back together and seemed to work, so in race 1 starting 13th and made my way up to seventh and was catching the front pack and broke the linkage again exactly the same, I had to send my a mate back home for another linkage housing as use my spare and no 1 had 1, after 2 hours of messing we found it was catching a mounting bolt thread which was 5mm too long so 3 washers sorted that at the time.so back out for race 2 and 14th on the grid. I had and amazing start and in 2 laps got upto 5th then there was a big accident and red flag. As we only done 2 laps it was a complete restart, that means starting back in 14th.well I was peed off with that,so restart and got up to 8th and chasing the front pack down and having to hold off the person behind I had the fastest lap until last lap on last corner the person behind drafted me and pasted me on the line and got fasted lap by 100th of a second.
So had a good time with car on pace, just need to learn more and hopefully get some good results. Roll on brand hatch mini festival 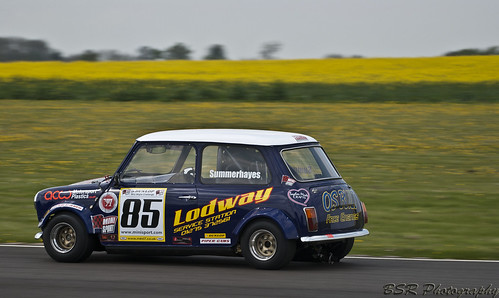 I'll be keeping an eye out at Brands, I'll see if I can get some pictures for you

How did you get on at brands then? was this you driving this car?

Yea the exhaust mounts had snapped.
Crap really, lost it on paddock in quali and ended in the gravel
So after 3 hours of cleaning new tyres on front and few bits n pieces
Race 1 was even worse 1 lap and the back end stepped out and got collected and snapped the rear camber bracket bent shock and bent radius arm plus smashed rear wing
So a nite of repair and back out for race 2 on Sunday
Well was ok but touched wheels with an other car then track went out and handled like a dog so I backed off and just finished to collect some more points, it ended with a bent steering rack arm, bent steering hub arm plus the exhaust came off a mount on the last lap,
Well in missing the next too meetings and changing a few things and the cars off to endafs for a set up and test at pembrey before mini festival at oulton park in July.

Back to Motorsport Blogs