After carrying out tests of aftermarket Lucas Distributors currently available from different suppliers on his Distributor Test Bed. Highlighting the difference in Advance Curves and where they differ from the manufactures Specification. This article is primarily about the remanufactured one Distributor fits all 850-1275 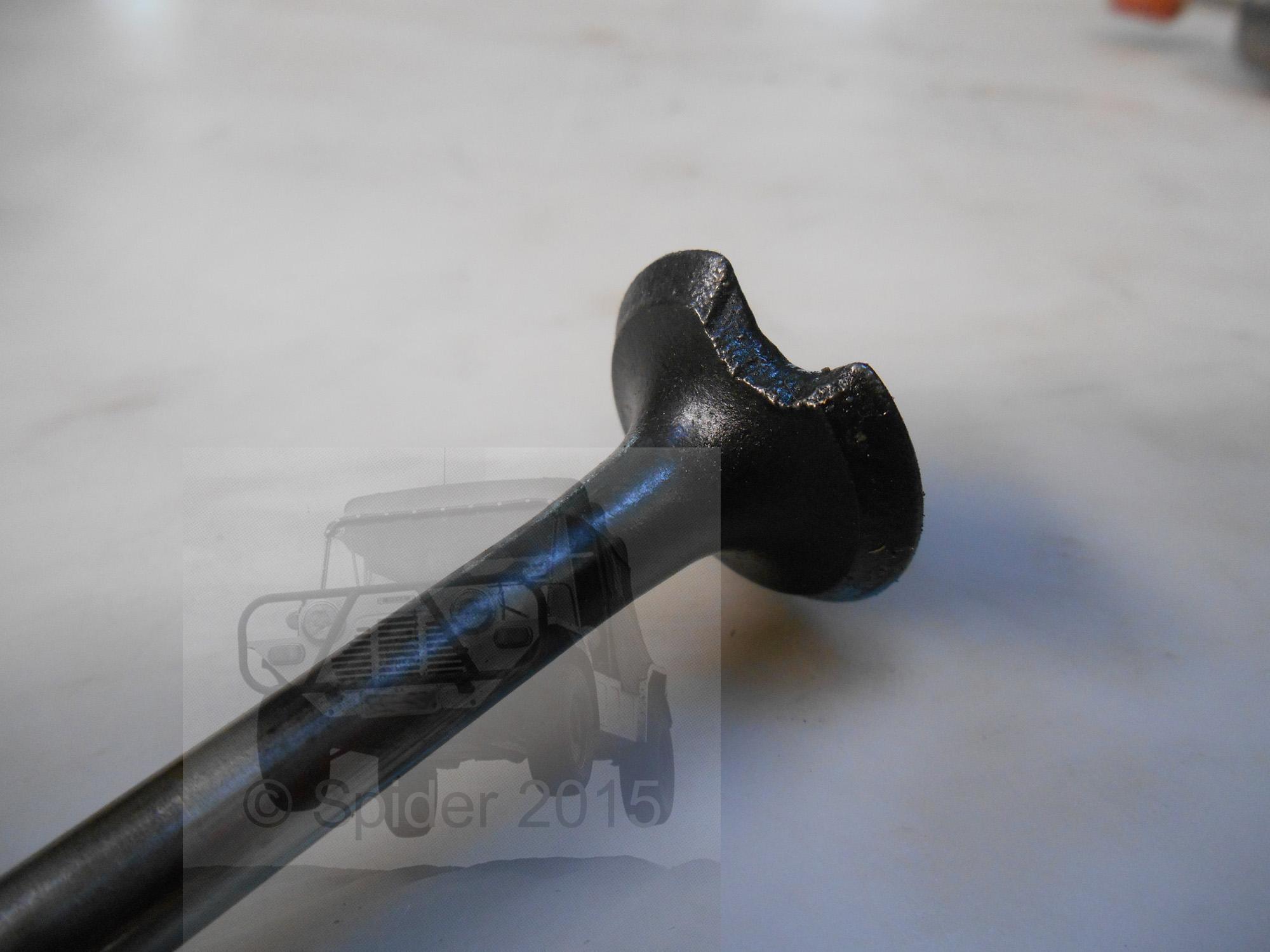 It kinda looks like it's been oxy cut.  It also cracked the head.

The owner is a reasonably sedate driver in that while he would keep up with surrounding traffic, he wasn't one for ringing each and every gear out either.

The distributor fitted was for a 998 engine.

When the Advance Curve of what should be fitted is compared to what was fitted, the reason for the badly burnt valve starts to become clearer

( a shot of the disc from my dissy tester)

The RPMs and Degrees Advanced in that Graph ^ are at the distributor, so you need to multiply them by 2 for what's going on at the crank.

Looking at the graph, what is clear is that right around 'the normal cruising zone' from 2000  to about 4000 RPMs, the required Ignition timing was quite retarded. Driving with it in this state causes very hot gases to go through the exhaust as the fuel is still burning (or not long finished) as the exhaust valve starts to open, causing the burning of the valve. If it were from a lean mixture, then the valve would have a white appearance.

Note too that this particular distributor, as fitted, doesn't have a Vacuum Advance either, which in this case, could have helped.

This shows why the correct advance curve is important and just one example of serious engine damage.

Just coming to the Lucas Copies that seem to be popping up on ebay and other places these days, most of these don't seem to have a stated Advance Curve. I've been able to test around 30 of these now and no 2 have been the same. I've seen some very wild figures from these as well, in one case

Now, remember that is in Distributor Degrees, so that is a total of 40 degrees at the crank + about 6 degrees static, way too much for any A Series Engine I know of!

Yes, it was fitted to an engine and it only survived around 2500 km before it too was damaged, in this case, the owner was fitting a Primary Gear Seal about every 2nd day, after a quick check to show him that his fresh engine had some serious blow-by, it was pulled down. We found that the ring lands on the pistons were hammered down, pinching the rings.

From the tests I've done on these copies, there doesn't seem to be any rhyme or reason to them, they are just a lucky dip.

So, I'd suggest when buying any of these new distributors, asking what the Advance Curve is. If they simply say, "Suits from 850 to 1275 Engines", then I'd suggest you study the above carefully, if you do have to purchase one as yours is beyond a overhaul, then I suggest to speak to AC Dodd here on the Forum or H&H Ignitions who can re-curve it to suit.

If your In NSW then Moke Spider can also advise and no doubt sort you out.

Just a bit more on Advance Curves and some of the whys and where fores as well as why 'one size does not fit all' despite what's in some advertising.

I've had a couple of questions on this. I hope this doesn't put peoples to sleep but it is an important topic and one often over-looked.

The distributors have an automatic advance mechanism that advances the ignition timing with increasing engine speed (although on some engines other than A Series there are a few that require a bit of retard at high speed) and some have vacuum advance.

The burning of the fuel mixture in the cylinders does not happen instantly although it is fast. At some point in that burning process, it will reach it highest or peak pressure.

Ideally, we'd like that peak pressure to happen at about 14 degrees (give or take depending on the engine specifics) after the piston reaches top dead center (ATDC)  (that is on it's way down, which makes sense).

So if we had a fixed (no auto advance) distributor, we can easily set the timing so that the peak pressure occurs at just the right moment (14 degrees ATDC) at say 2000 rpm (or at say 60 kmh in top gear).

When the engine speed is increased, the time it takes for the piston to move is also faster. Since it does take time for the fuel mixture to burn, the peak pressure will occur later and the most efficient use of that cycle has not been taken advantage of, ie, efficiency is lost. At even higher speeds the exhaust valve will in fact begin to open while that fuel mixture is still burning so even more efficiency is lost as the pressure that would otherwise be driving the piston down the cylinder is lost out the exhaust! Good for getting the exhaust gases out of the cylinder but doesn't do much for moving the car! Under these circumstances, the ignition timing is said to be retarded.

OK, so now if we set our fixed distributor to suit say 4000 rpm (or say 100 kmh because we all like going away!), then at slower engine speeds the burning cycle will start too early and if it occurs too close to top dead center and so the piston will tend to drive in to the bearing rather that turn the crankshaft. Again, the best efficiency is lost as the engine is trying to compress the con rods or squash it's bearings. This is said to be over advanced. Also, be aware too, that once the engine has pasted it's peak Torque RPMs this 'Pinking' may not be audible.

Usually, but not always, over advance ignition timing can be heard, it can sound like someones poured a packet of gravel in to the engine or there is an aluminum can stuck inside it. I think it fair to say most of us here have heard this and is known as pinking, although there are many other causes of this, not just ignition timing.

Who remembers riding their push bike? At what point when pushing the pedals did you get the most out of that push? It wasn't when the pedal was up, it was probably when the pedal was around the 20 to 30 degree mark. What happened when you did try to push to pedal when it's too close to the top? You went red in the face and not much happened, sometimes the pedals would even go backwards and more often than not, you'd hurt yourself. Yeah, I remember that. What happens in an engine is not a lot different.

So to reduce those effects and gain the best efficiency from the engine, the ignition timing advances automatically with increasing engine speed. There are many factors, mostly inside the combustion chamber of the engine that affect the speed that the fuel burns at and of course the actual mixture ratio (weak or rich) will have a big bearing on this too. Engines are very sensitive to this and it is for this and so the amount of advance is rarely linear or a straight line but more of a curve. It is for this reason that a certain distributor that suits one type of engine will not suit another. Also, to further complicate this, different Octane fuels burn at different rate, high octane burning slower (no that is not a typo) hence why you need more advance with higher octane fuels. Compression ratio too has a bearing on ignition timing requirements.

Here is the advance curves for most 998 and 1275 engines for comparision;- 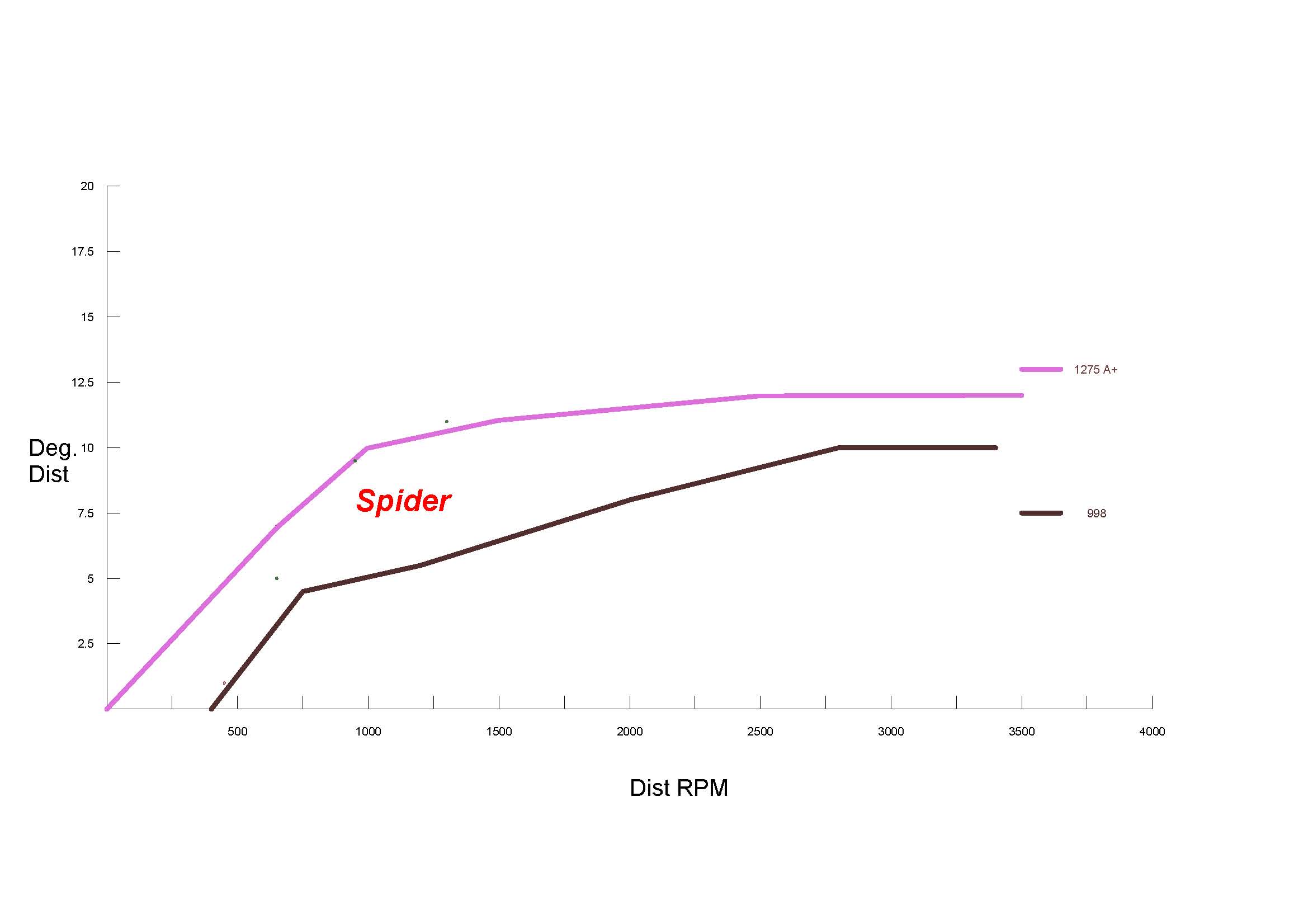 So, for example, if we put a 998 distributor in a 1275 engine, it would over advance and likely ruin the pistons (seen that more than once).

So far, this has been about the Automatic or Centrifugal Advance in the Distributor.

Some also have a Vacuum Advance as well. When you accelerate the cylinders fill reasonably, but when cruising down the road, they don't. Under these conditions, there is little mixture in the cylinders and again, it take even longer to burn. Also on cruise or part throttle, the manifold has a high vacuum. This vacuum is used to operate another mechanism on these distributors to further advance the ignition timing although this has little to do with avoiding engine damage, it is more about getting even better efficiency from the engine. In most cases, it could be disconnected and won't do any harm, other than use a little bit more fuel.

Some problems that can occur if the ignition timing gets too far outside the sweet spot - other than lost efficiency - are;-

Over Advanced;-
Damaged Engine Bearings,
Damaged Pistons - the top of the piston can squash down on the top piston ring and jam it,
Burnt holes through pistons (though, this is extreme),
Engine overheating