Following a bit of a hiccup when both of my trolleyjacks failed, a neighbour came to the rescue and I've drilled pilot holes for fitting the new sump-guard and got everything ready for removal of the long suffering 998.

Then it's steering rack removal (and re-furb) and mocking up positions for extra relays etc ready for new loom. 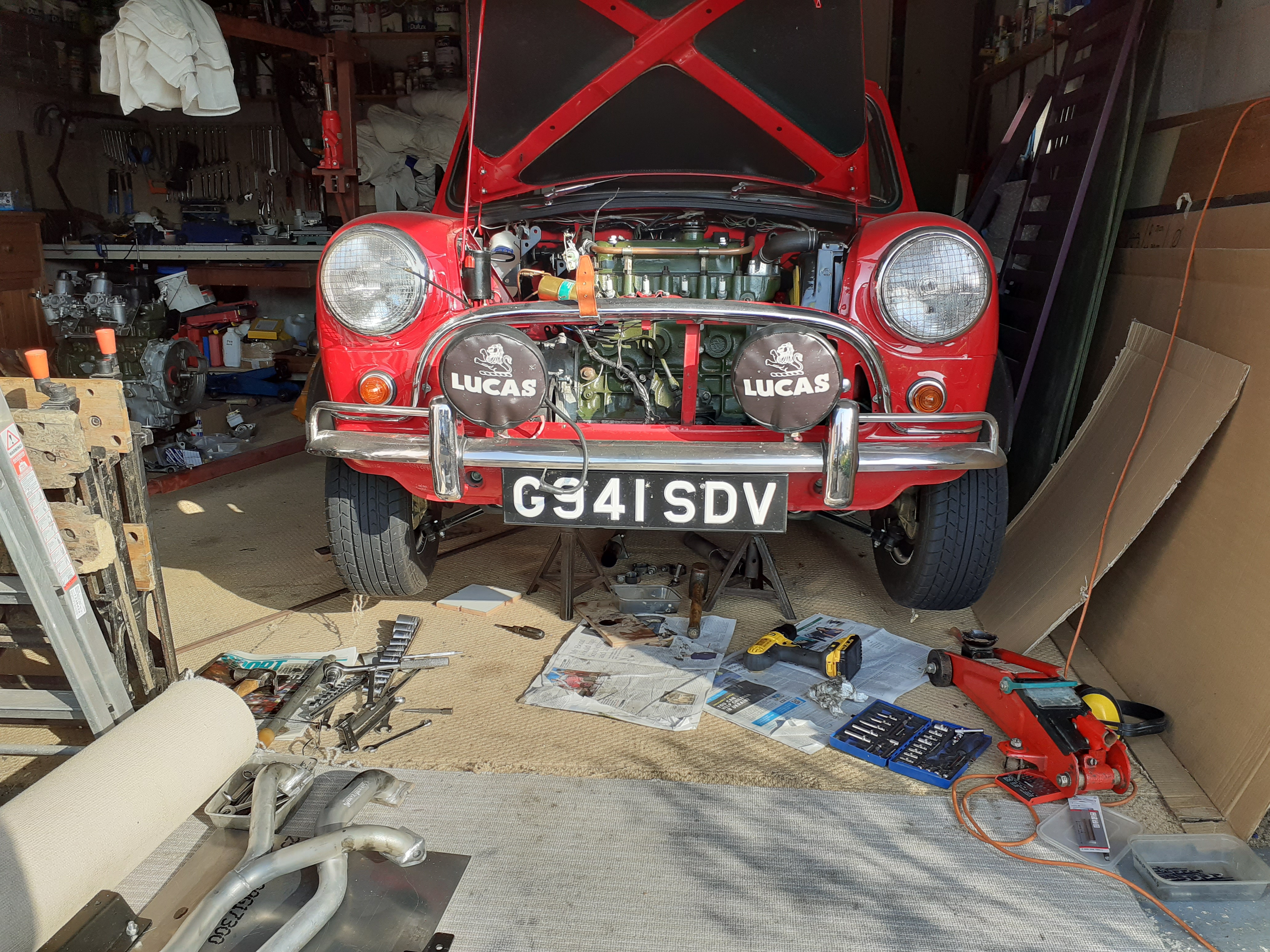 Hi johnR,
Did you have clearance between the centre main strap bolts and gearbox casing,
I’ve seen posts that there is no clearance ?

what do you mean by 'Centre main strap bolts'? My guard is the Monte Carlo one which has two steel 'wings' (which you can just see in the photo under the exhaust downpipes) securing it on the sides and three bolts along the front - all appear to clear. It was touching the RC40 two into one collector at the rear but I think I can turn that the other way up so the exhaust sits higher (which is probably a good thing anyway)

998 out, now to transfer shared parts such as the rad, lightweight flywheel, oil filter pipe, starter etc to the 1293. 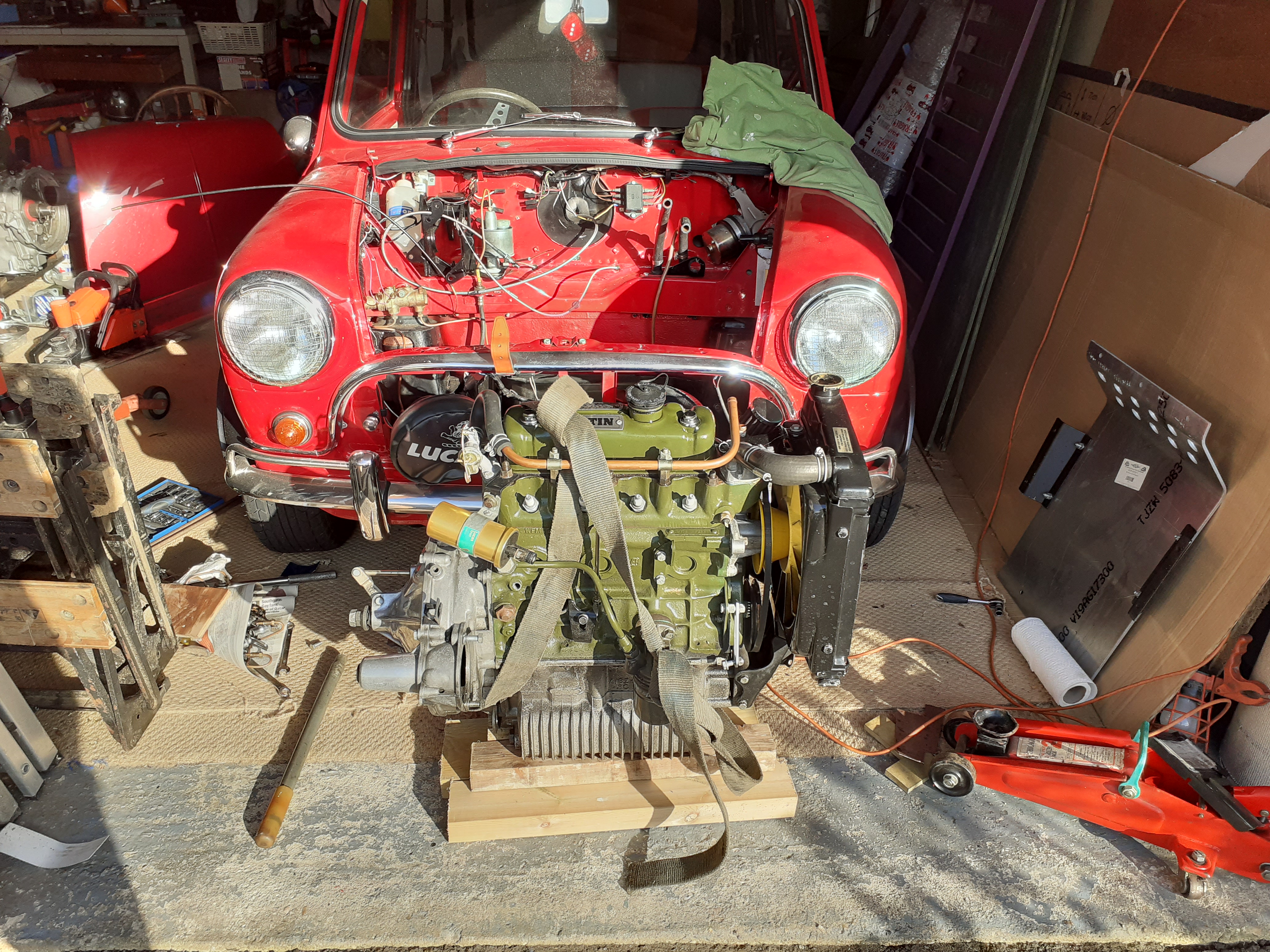 I started today by taking the clutch/flywheel off the 998 (came off with no bother - probably because it's been on and off quite frequently) and bolted onto the 1293. The radiator and coil are also ready to go on, just the oil pipe left now and the 998 can go into storage pending a supercharger one day? 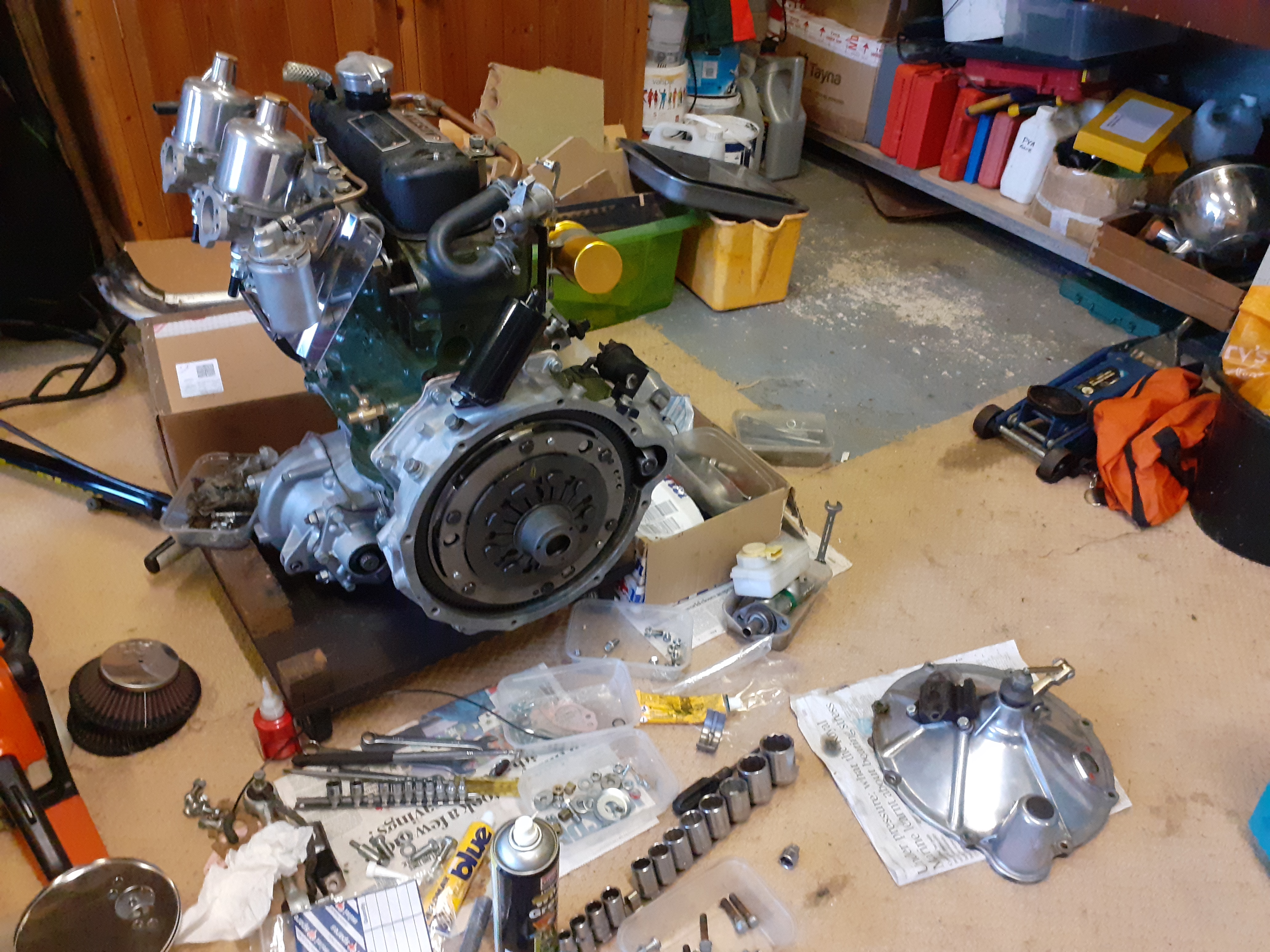 Spent some time today polishing the wok, preparing the block and head for paint touch-ups and adapting the K&N HS4 backplates. The plates appear to be meant for two bolts to attach the filters, whereas I want to use my single central bolt filters. Having drilled the central holes and attached the centre pillars I found out why two bolts are used when the large head on the pillar securing bolts fouled the larger dashpots. I got round this by countersinking the plates and pillars and using some c/s bolts. Now I just need some 5mm solid rivets to block the standard holes in the backplates. 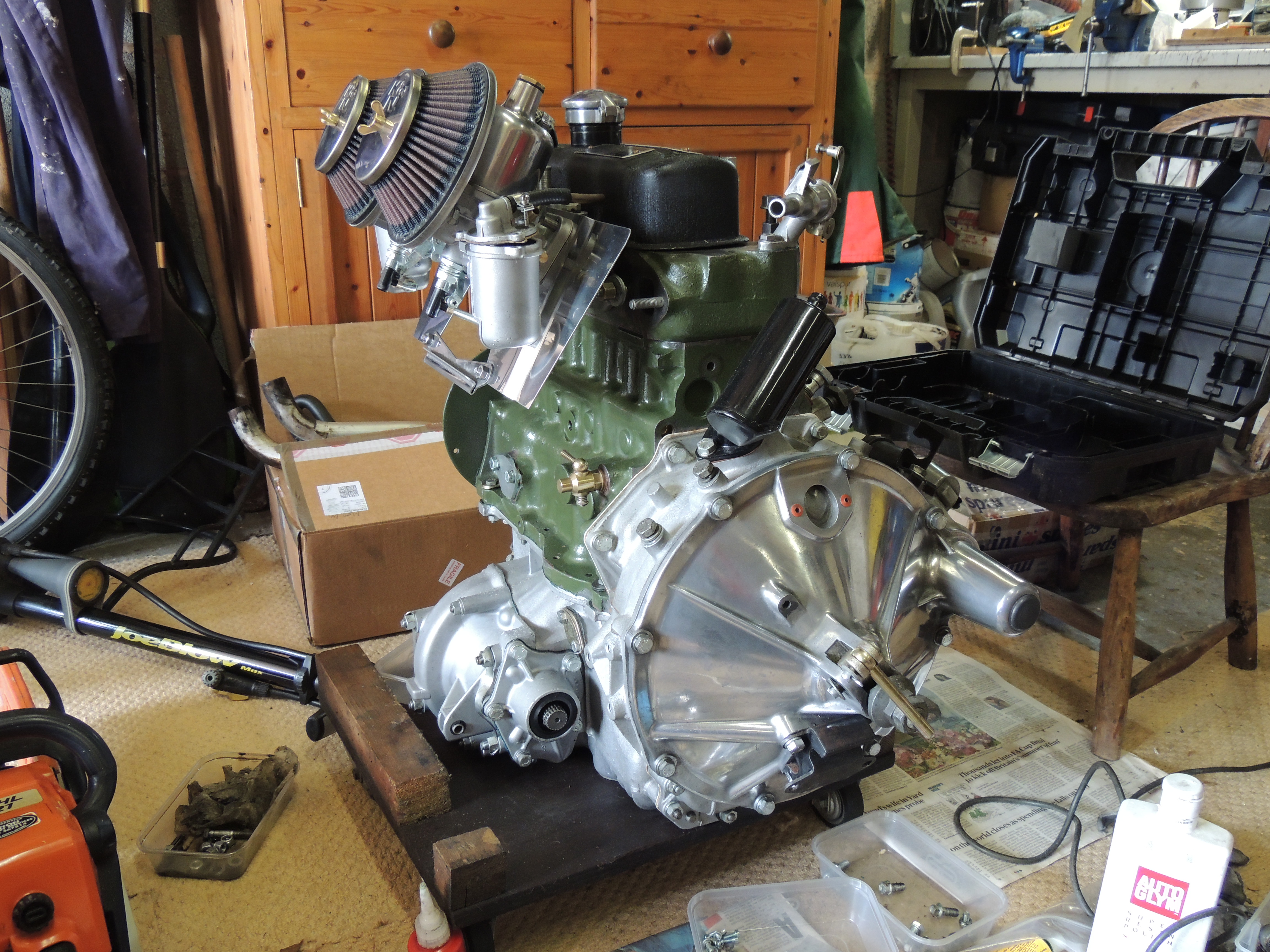 Spent a while in the garage yesterday - I unbolted the subframe mounts (one of the teardrops had come apart at @ 2000 miles), released the steering arms and unbolted the shox top mounts then used the engine crane to lift the body far enough to be able to remove the steering rack for it's re-furb. So far so good. Then I thought I'd carry out the easy job of fitting the fire extinguisher clip on the cross member in front of the passenger seat. I decided to use 2 rivnuts to secure it and drilled the holes. I tightened one up with no problem but the second wouldn't seem to grip and then the puller wouldn't unscrew from the rivnut, not helped by it rotating in it's hole. I eventually freed the puller but then the bolt wouldn't screw in so I ran a tap through it and tried the bolt again. it stuck and I can't remove it - once again the rivnut is spinning and there's nothing to grab hold of to stop it. I got pissed off and left it - the only thing I can think of to remove the bolt is to grind some flats on the rivnut flange so I can grip it with long-nosed pliers. a simple job that's turned into a nightmare - why didn't I just use self-tappers? Aaaaargh!

In better news, these beauties have arrived ready to adorn the engine bay when the new braided loom goes in for that Monte Carlo rally look. 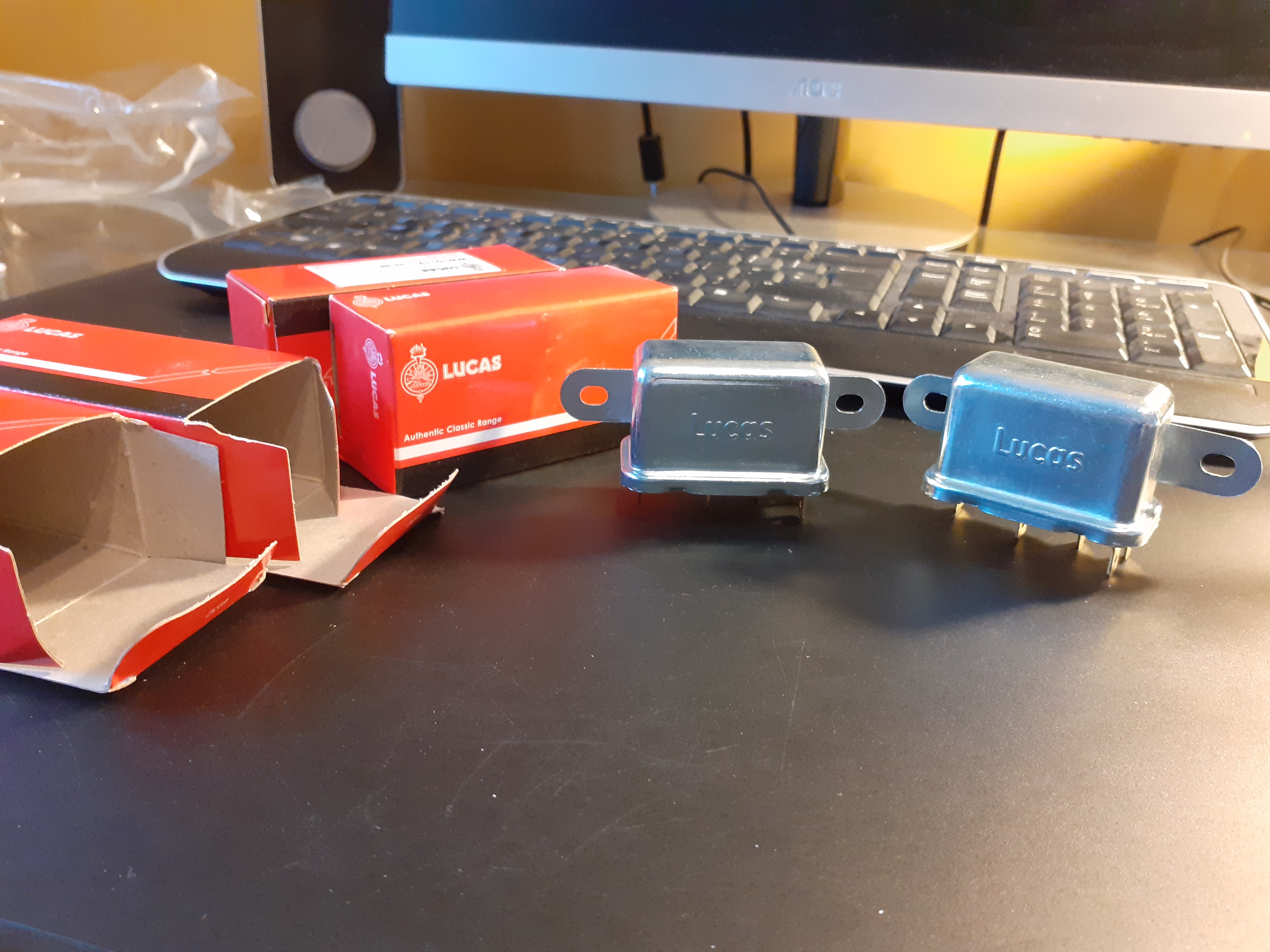