Hi all time for a little update, well I didn't make L2B but I did make it to the garage for the MOT which was all going grand until an over powering smell of petrol filled the garage and upon further inspection petrol was pouring out of the tank from the sender unit

so it failed on that but everything else was fine apart from advisory on a couple ball joints. Since then it's been sat gathering dust as all my money has been put towards our wedding but now I'm happily married

and back from a great honeymoon in Dublin so been starting to do odd bits n bobs again, most of my time at the moment has been spent making subframes for other people but hoping to make castle combe action day at the end of September :) 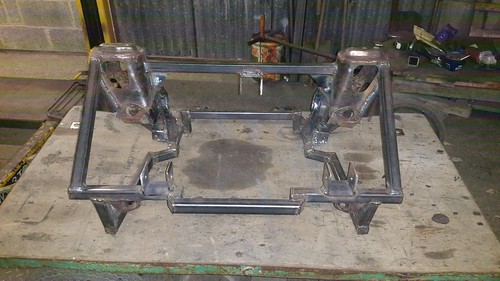 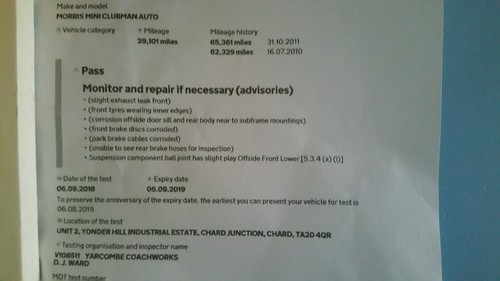 Well time for an update, up bright and early for the 1hr journey upto castle combe,soon became apparent that I have a cooling issue once driving at 70mph for too long :/ so crawled to combe at 60mph on the motor way until the cd player stopped working so then my wife had to put up with my waffling for an hour much to her dismay haha. Made it to combe got sound checked and parked up with Torbay mini club and caught up with some old friends and met some new faces :)

So first track time, took my friend jake out and all seemed perfect plenty of torque with great handling, was just starting to get used to the track again, finding the engines limits. If I'm gonna be fussy I'd say the rev limiter comes in slightly too soon as I kept hitting it in 2nd gear upon exiting the corners

apart from that slight flat spot in the middle of the rev rang but should be easily sorted when I get it remapped ? then I noticed the temp gauge had crept up so we exited the track 1 lap early.

Sat back down with lauren (my wife) only to find out there had been a crash, she said a grey clubman hit the tires pretty hard bouncing off really far. I don't think anyone was hurt but the car was pretty smashed in and the rear windscreen was popping out

Time for 2nd track time with Lauren as a passenger however whilst queuing we got pulled out by a rather rude marshall claiming that her legs weren't covered enough... maybe they should be more clear and state that tights/leggings aren't acceptable. Anyhoooo decided to watch a few more laps before heading home with my shinny new headlinning I bought ? so all in all a really good day with only a few small issues to sort 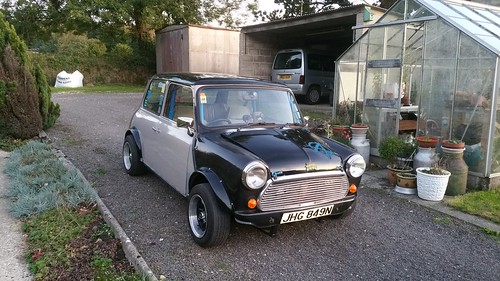 The clubman that crashed was another 16 valver, at least he managed to drive it away

Awesome, nice one! Is that my subframe up there??

Awesome, nice one! Is that my subframe up there??

Yes it is :) should get your driveshafts in the next couple of weeks to

Guess I should update this as it's been ages, haven't really had that much time on it due to work and other stuff but basically been going round in circles with it.

So from the beggining, I ripped the whole cooling system out and went for a front mounted radiator to try and get more airflow through to aid cooling 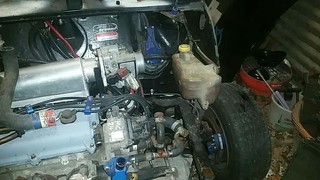 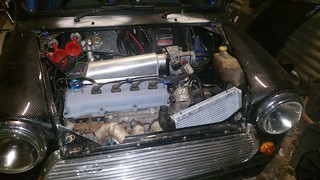 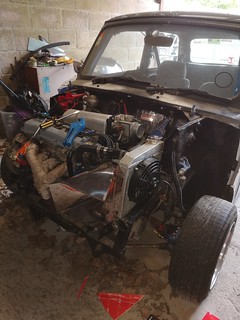 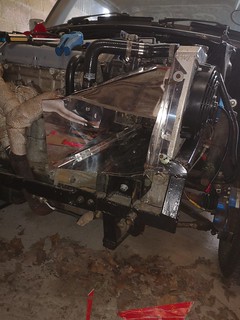 Now it stays perfect temperature whilst idling so need to get it out on the road for some proper tests at different speeds.T hen the battery decided it wasn't going to hold charge anymore

I fitted a little 12v LED that points at me when driving that tells me when the thermo fan turns on. Easy to wire and let's me know if the fan is doing what it's supposed to and if the cooling system is coping. It was supposed to be temporary but I think it m might stay there.

I fitted a little 12v LED that points at me when driving that tells me when the thermo fan turns on. Easy to wire and let's me know if the fan is doing what it's supposed to and if the cooling system is coping. It was supposed to be temporary but I think it m might stay there.

What wiring loom have you used? If it's the micra one there's a relay for the fan in the longer box from near the battery (in the micra cg13de 95ish). The one here I come think is a blue with black trace for power and a black for earth.

On a positive note I took the mini out this evening for a drive and it kept perfect temperature even cruising at 70mph :) so next steps are to just generally tidy up cosmetic things in time for IMM

I just looked at the wiring diagram I have and the relay is triggered by pins 45(LG/R light green / red) and 9(red) on the ecu plug. I'm not sure why there's 2 triggering wires, maybe it's a redundancy thing or so it can trigger for different reasons? It triggers/switches on earth so after this you'd just need power to your relay.
Ps this was for the facelift micra.
The wire goes red further down the loom the other side of a plug.

I'm guessing the relay is in the big fuse box normally found in the engine bay near the battery?

Yeah, there's 2 boxes on mine, the larger houses the relays, the smaller has the fuses. Rad fan relay(black) is closest to the smaller fuse box. The one next to it is the ECCS engine control relay (green).