As many of us appreciate, our Engines are fitted with an Oil Pressure Relief Valve, to Regulate and then set a Maximum Pressure that the Oil can reach in our Lubrication System. It is fitted between the Oil Pump and the Oil Filter, meaning Un-filtered Oil passes through that part of the Oil Circuit.

The Mini Engine, as many of us also understand, shares it's Oil with the Gearbox. While the engine itself doesn't normally introduce any metallic contaminates (that will be of issue) in to the Oil, the Gearbox does, due to them having Synchromesh and of a Baulk Ring Type.

Rarely, some of the metallic contaminates in the Oil, can find their way up through the Pump and lodge in the Oil Pressure Relief Valve and in doing so, can jam them in what ever position they maybe at. Speaking only of my own experience, these events must be quite rare. I've found one only in my 35+ years of tinkering with these cars.

The idea of fitting a Ball Bearing in place of the standard 'Shuttle' has been around for a very long time, to reduce the chances of the Valve jamming. There have been issues found from doing this modification and I'll attempt to illustrate these here.

First off, let's have a look at the standard 'Shuttle' type Oil Pressure Relief Valve and it's operation;-

When the Oil Flow rate delivered from the Pump exceeds that that can be dumped from the Engine Bearings, the Oil Pressure rises as the Valve is seated. 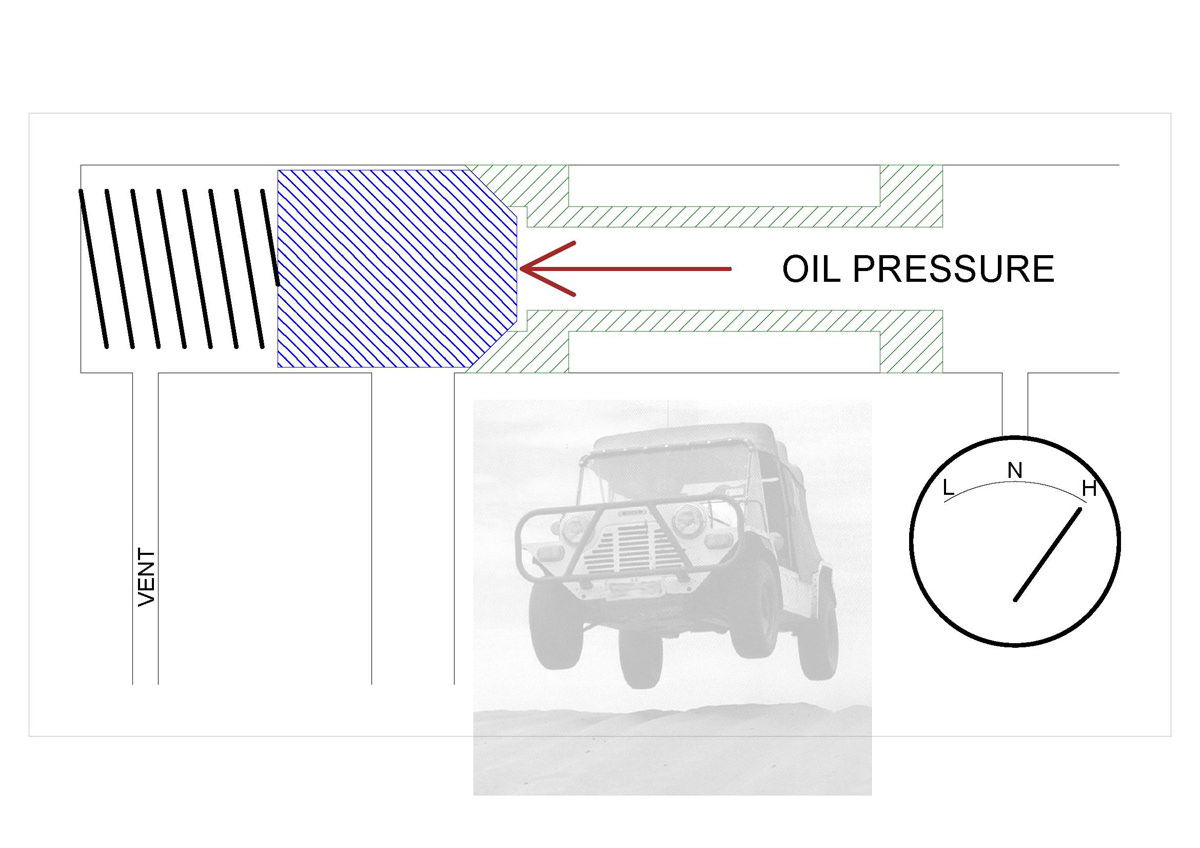 Note too the Vent behind the Shuttle (under the Spring). This is VERY important as it allows any Oil that's behind the Shuttle to also dump to the Sump, otherwise the Shuttle would be trying to compress the Oil and will never lift off it's seat. Under these conditions, the Pressure will go sky high - over 150 PSI - with a most likely result of the Oil Filter exploding. Yes, it does happen. 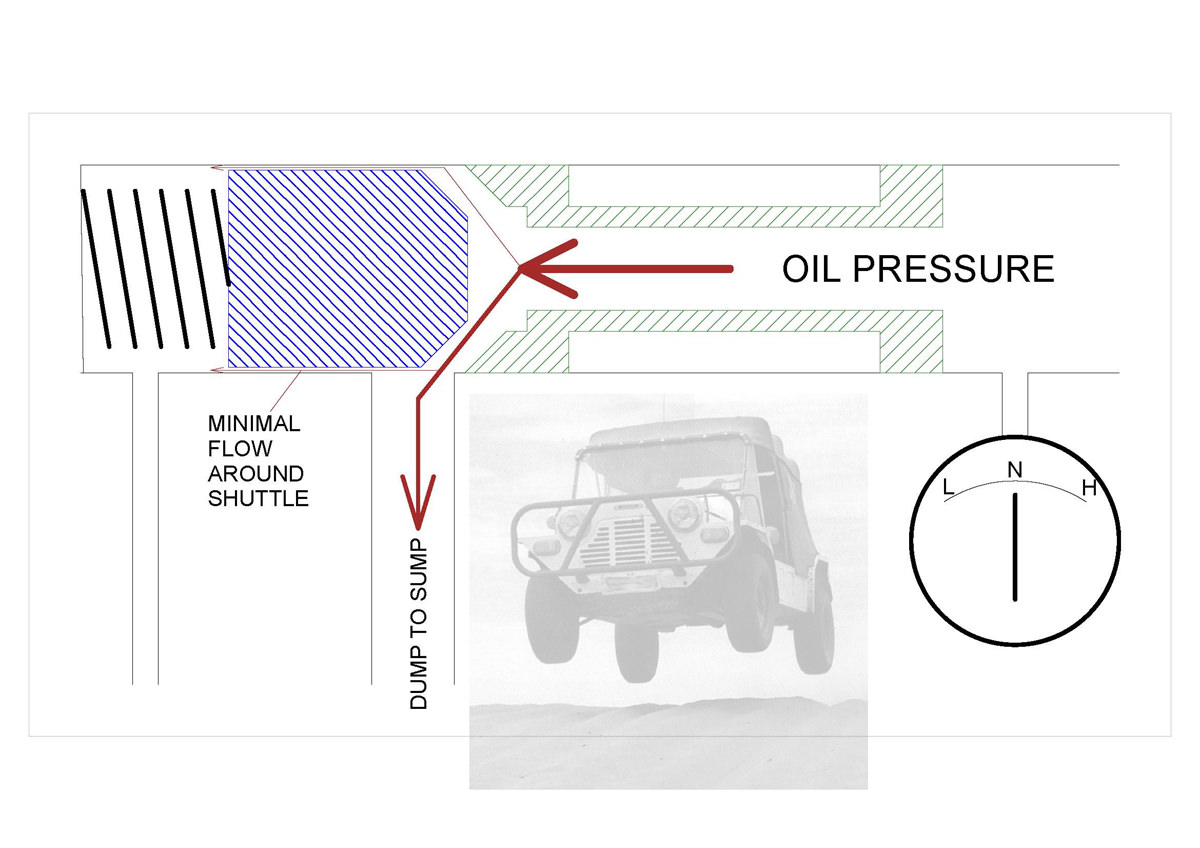 When the Shuttle lifts off it's Seat, the Pressure is Balanced between the surface area and shape of the Shuttle at it's Seat and the Spring on the other side of it. Note too that while the Shuttle is a neat fit inside the bore in the Block in which it is fitted, that it does have some clearance, this is necessary to ensure it does have room to slide freely, however it can be it's Achilles heel too, that due to this small clearance, that's here the debris from the Gearbox can lodge and in doing so, jam the Shuttle.

You can just make out the Seat in the Block in this Photo;- 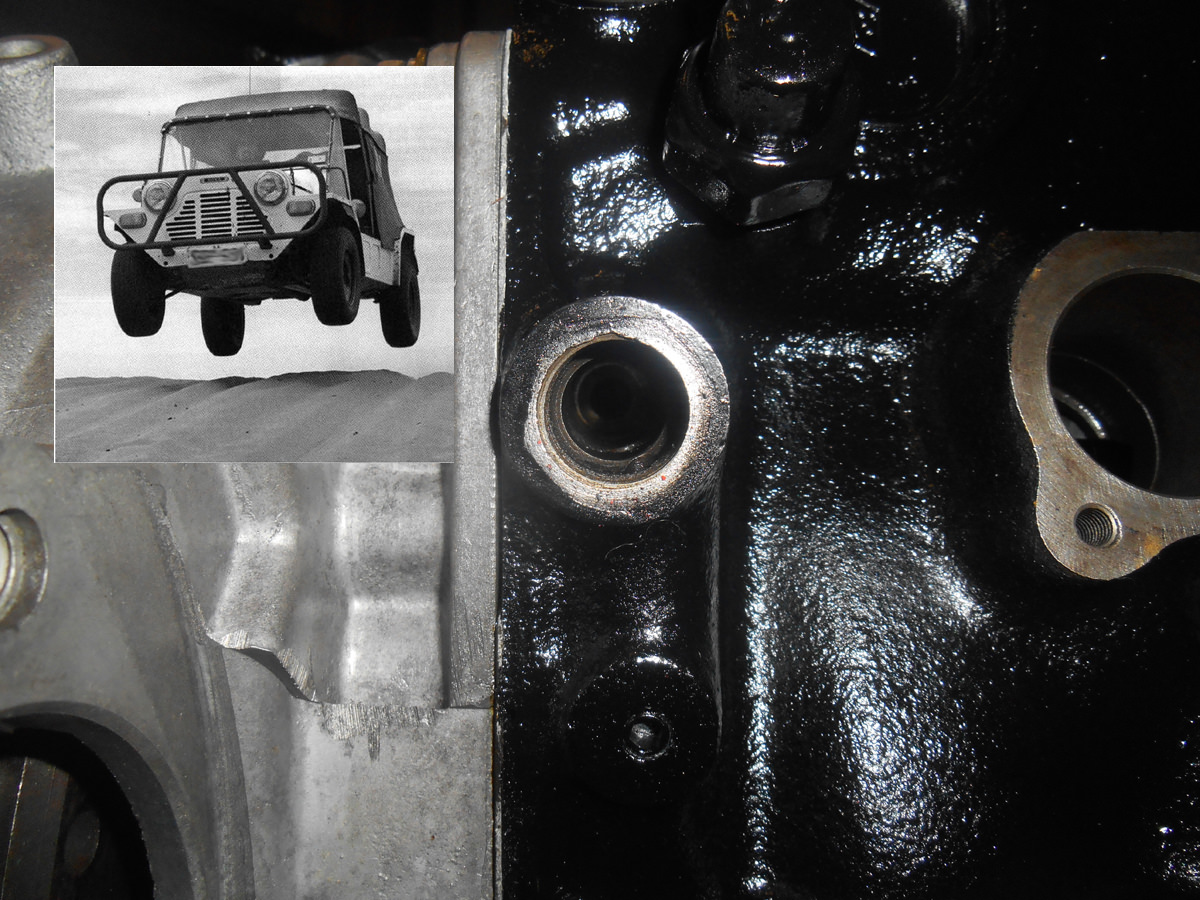 The Cap, Spring and Shuttle have been removed. The Shuttle shares a common size Bore with the Seat in the Block.

The Diameter of the Seat is 0.622", it is a 'nice' press fit in to the Bore. The Seat is removable (and should be pulled for cleaning of the Oil ways at Engine Overhaul);- 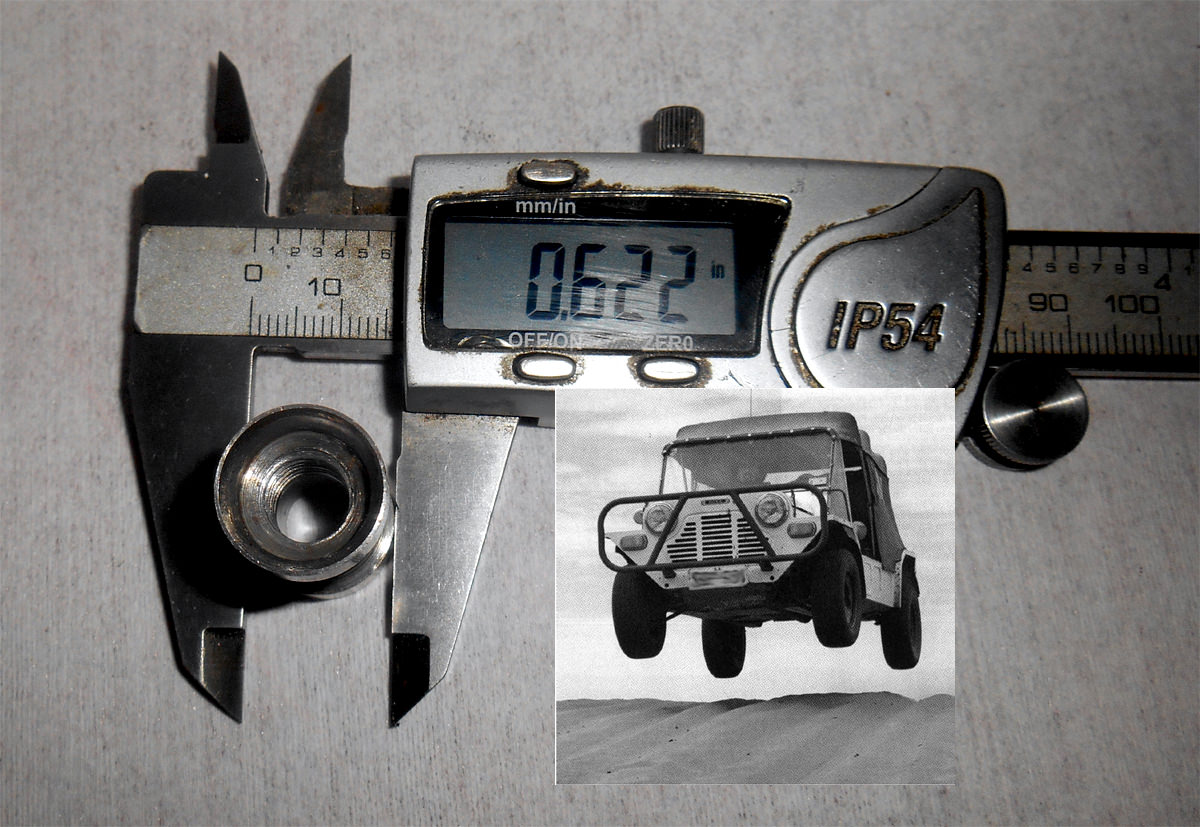 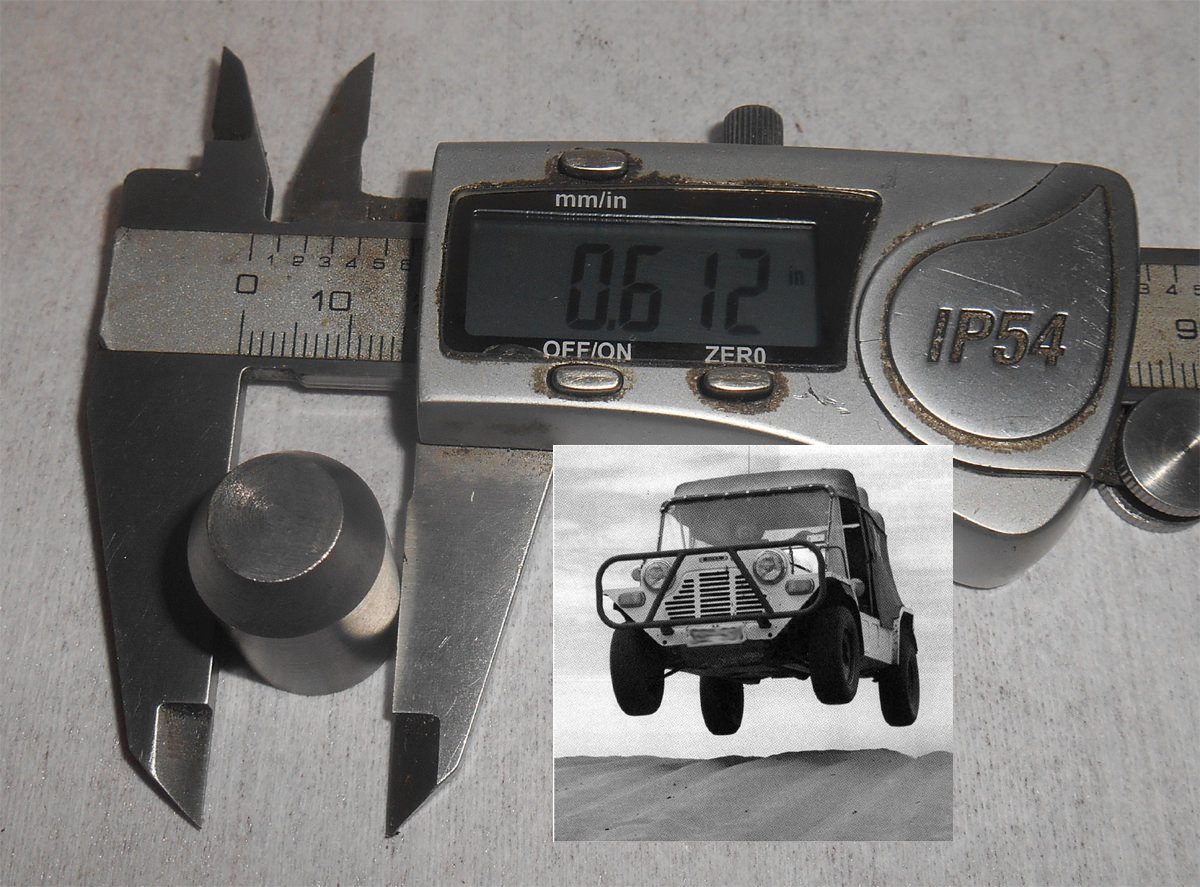 Now, moving on to the Ball Bearing and having a look at that, the size that's often included in Kits is 0.556", some 0.066" smaller than the Bore in the Block, to which it is fitted. It would be a 'task' to have that jam 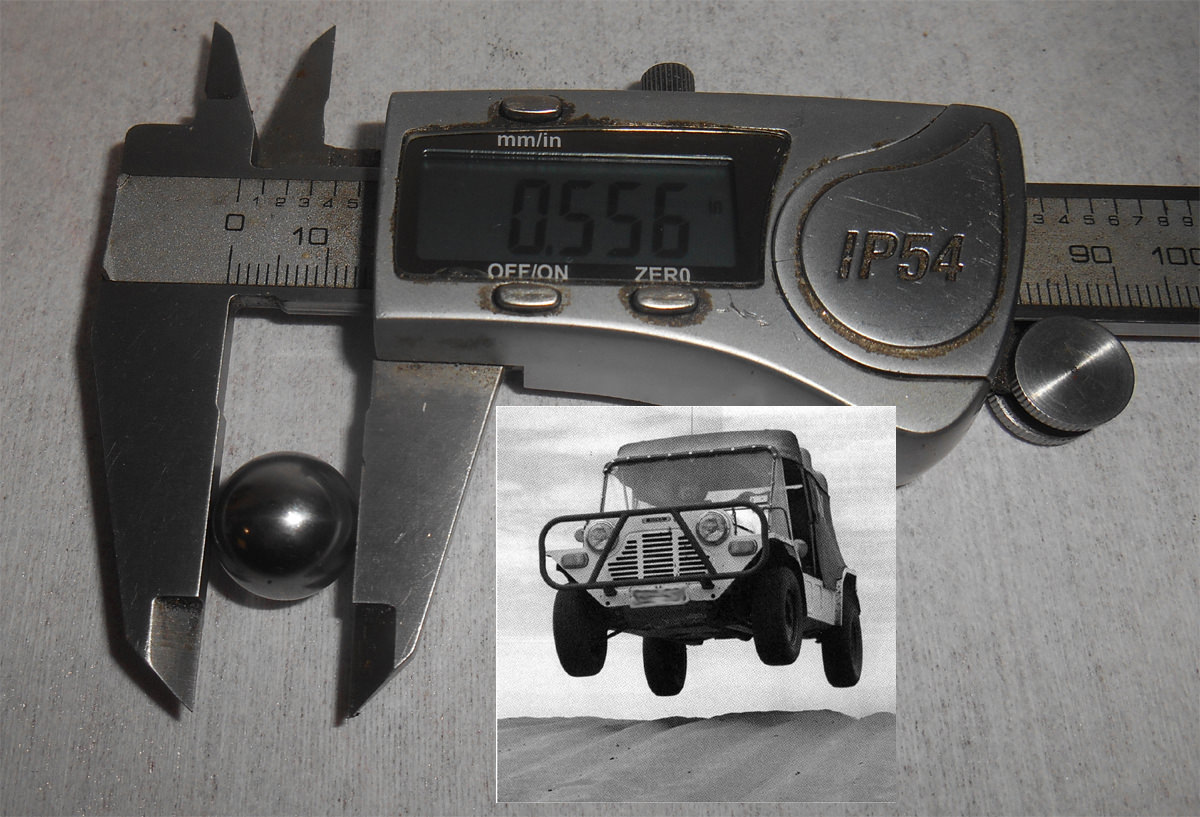 however, looking at it in operation, all is not well.  At first, it behaves the same way as the Shuttle, Oil 'Presses' against the Ball and the Pressure rises. 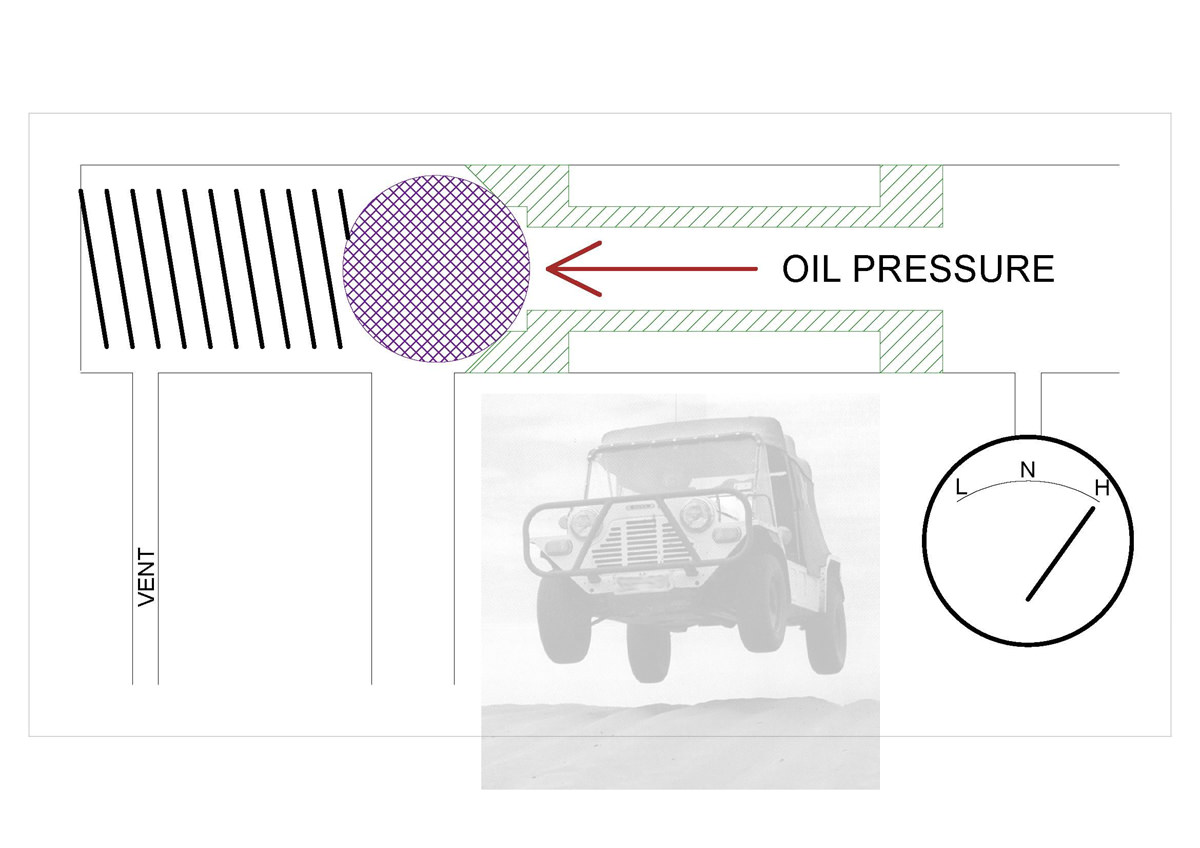 As the Pressure rises, the Ball lifts off the Seat, however, due to it's considerably smaller diameter (than the Bore in to which it is fitted), while Oil is dumped to the Sump in a normal way, some considerable Oil Flow passes beyond the Ball too and not just due to it's smaller size, but it's round shape is conducive to allowing the Oil to Flow past it (almost encouraging it to do so) and there's next to no surface area between the Ball and the Bore in the Block, just a 'line', where as the Shuttle has around 1/2" of length and some considerable surface area;- 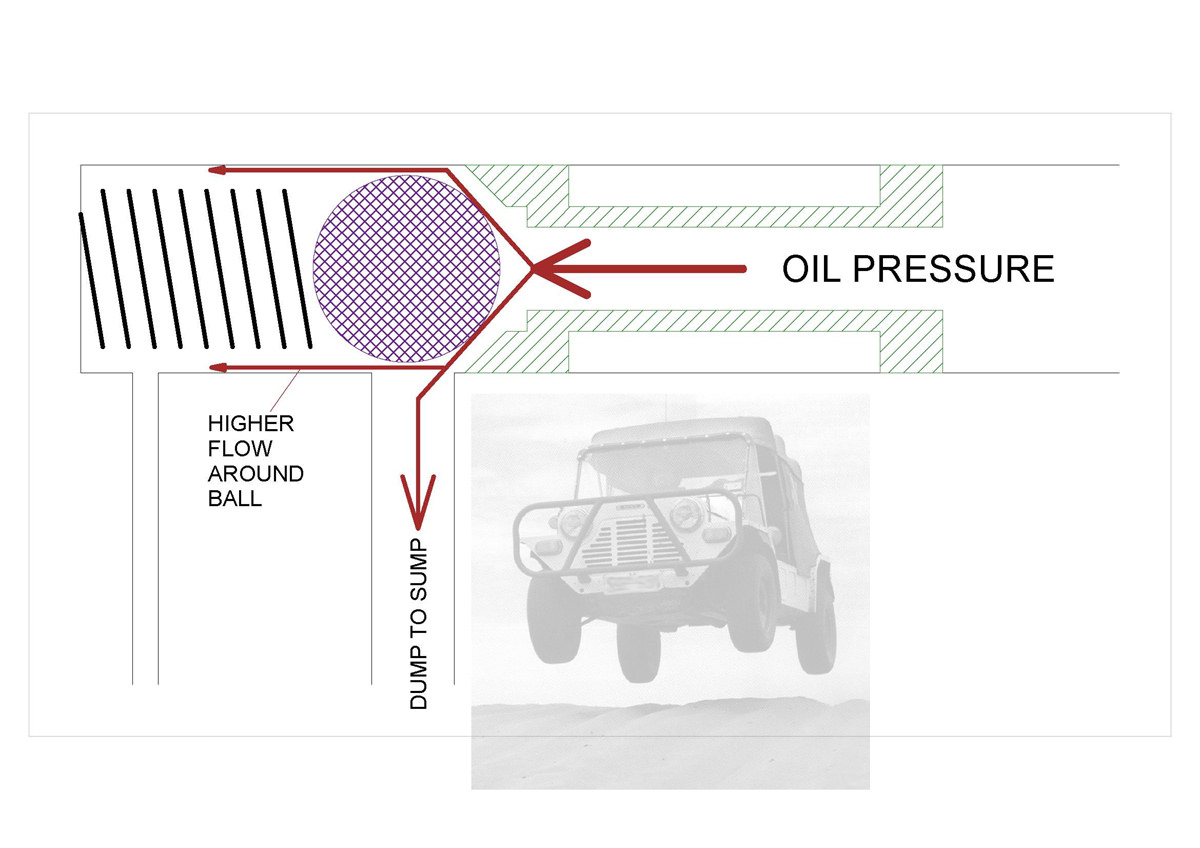 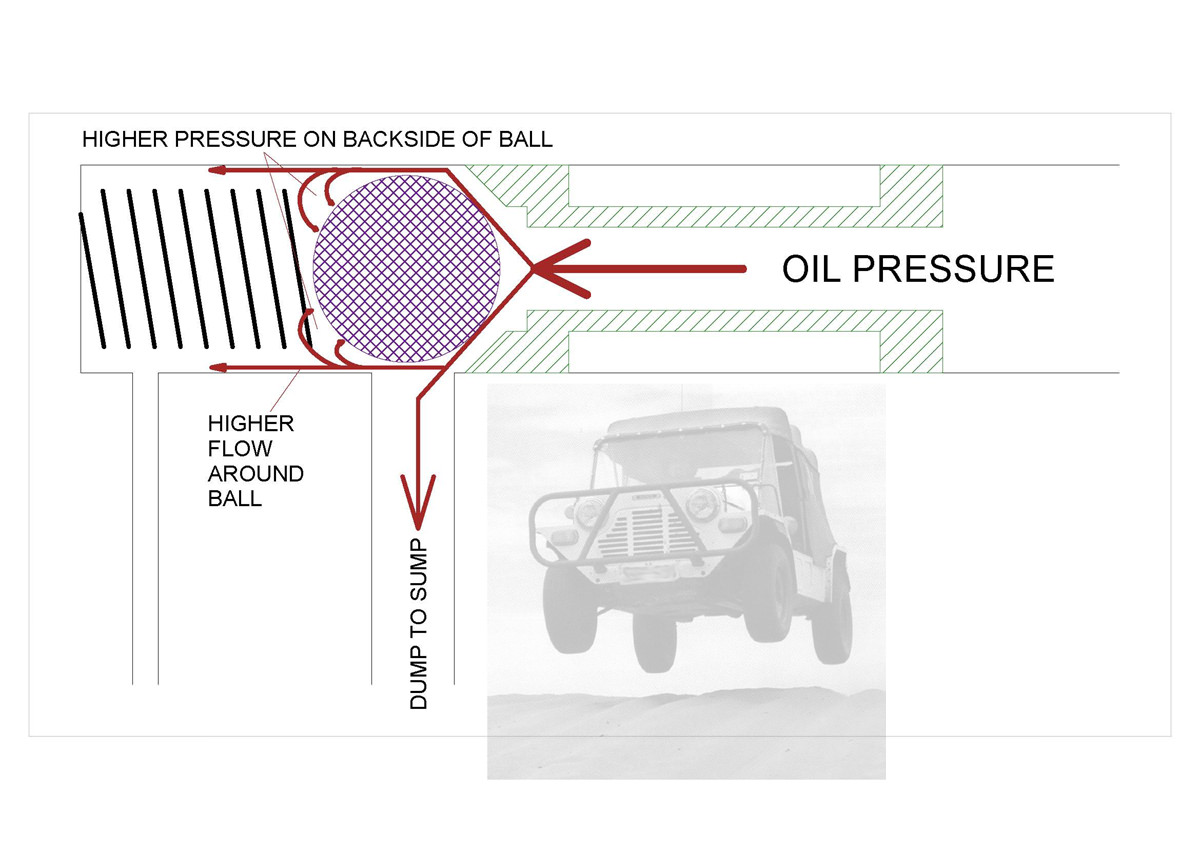 While that Pressure will be lower than that on the front side of it, it does also have some added pressure on the back from the Spring too.

The result from this additional Oil Flow at the back of the Ball along with the Spring is that at some Oil Flow Rates, the Ball will chatter 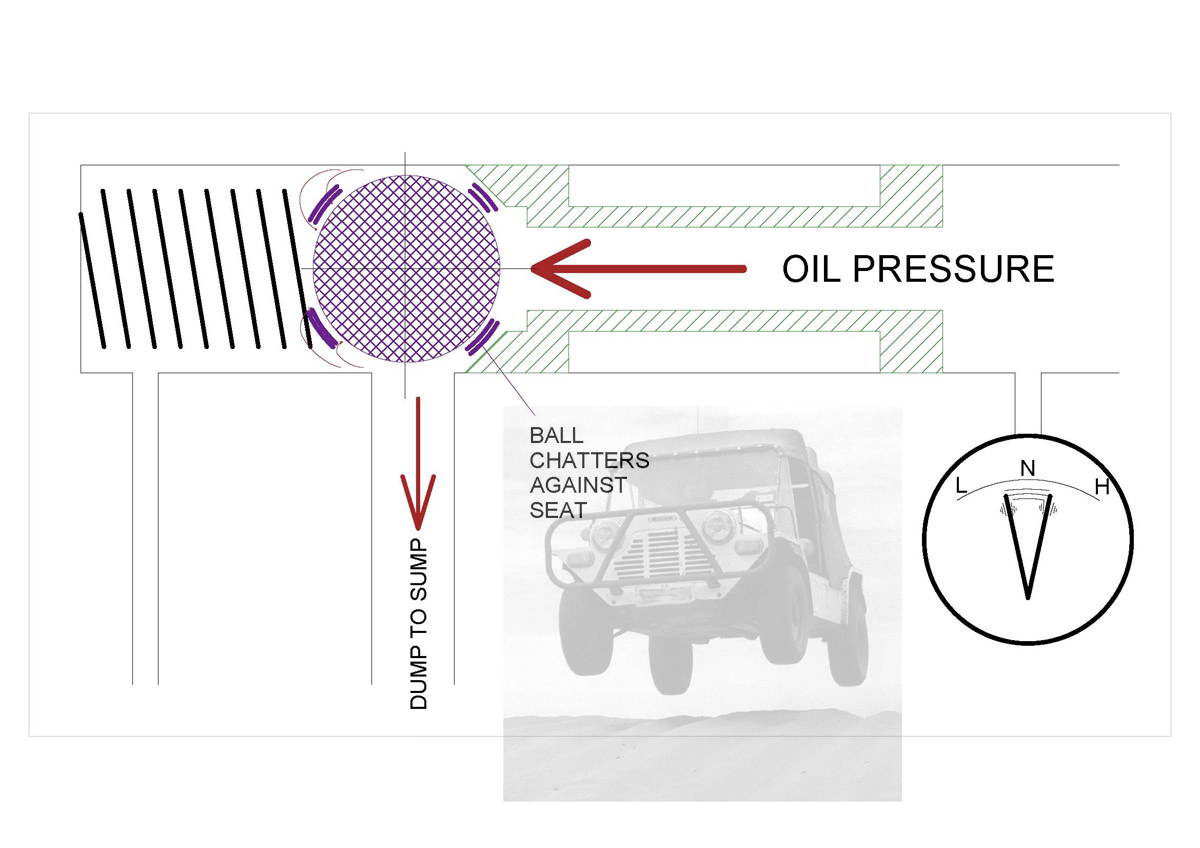 This chatter is often seen (with better gauges) as a fluctuation in Oil Pressure. What I've noticed often happen is due to the shape of the Seat and the Ball, it causes the Seat to Flare in the Block, making removal quite difficult and can also damage the Bore in the Block, requiring repair. This also comes about as the Spring is resting on a round surface, and while I've drawn things here all lovely and 'square, when fitted, this is not the case, the Spring forces the Ball in to the Seat and against the Bore, so when the Ball Chatters, it does so against the Seat and the Bore.

These maybe 'fine' in a Competition Engine that gets pulled down regularly and turns at high speeds, which means the Oil Flow is very high, so the Valve is nearly always well off it's Seat and 'Failure is not an Option' however, for regular and hotted up Road Cars, in my opinion, they are bad news as they are seldom turning at higher speeds and when they do, only for short periods. Much of the time our street going Engines are at Idle and mid range Revs where the Oil Pressure Valve is Regulating the Oil Flow, not just limiting the Maximum Pressure and this is when the Ball will chatter the most.