What If Bl Had Introduced The Innocenti Mini 90/120 In The Uk?

What if BL had introduced the Innocenti Mini 90/120 in the UK?
"It’s a question that many people asked throughout the mid-to-late 1970s, and yet we’ve never really looked too deeply into. The story of BMC, BL and Rover is littered with frustrating and tragic what-ifs, but the question of whether BL should have introduced its own version of the Innocenti Mini 90/120 really does bear pulling off the shelf and dusting off once again."
More on AROnline:-
https://www.aronline...mini-in-the-uk/

From the article comments section Ian Nicholls says:-
This is from the draft of my Austin Morris story….
“Then on October 22nd Leyland Innocenti announced its Bertone styled 90/120 hatchback Mini. Codenamed P53, it had been instigated by Innocenti because they were tired of waiting for British Leyland to produce a replacement Mini.
Inherited by Geoffrey Robinson when BLMC bought out Innocenti in May 1972, he nurtured the project, and did his best to keep cost information out of the prying eyes of British Leyland’s bean counters.
The main problem with the P53 was that its interior packaging was inferior to the original Mini, and was not a genuine four seater, although it was good enough to carry children in the rear. Geoffrey Robinson was of the opinion that the car needed an extra 9 inches, and that would cost an extra £1 million, around £10 million today, which Leyland Innocenti did not have.
When questioned why the P53 90/120 would not be sold in Britain, British Leyland responded with;
“When a new Mini does arrive from BL it will be a completely new package not just a shell.”
With production of the P53 having begun in September, Leyland Innocenti began to run down production of the traditional shaped Mini, which finally ended in January 1975.”

Innocenti Mini 90/120 (P53) development story
"In 1974, Leyland’s Italian subsidiary Innocenti introduced a rebodied, three-door hatchback Mini, styled by Bertone. However, within a year of its launch, BLMC went bankrupt, the company was sold to de Tomaso, and the opportunity to sell the Innocenti Mini 90/120 in the UK was lost forever."
https://www.aronline...ti/mini-90-120/ 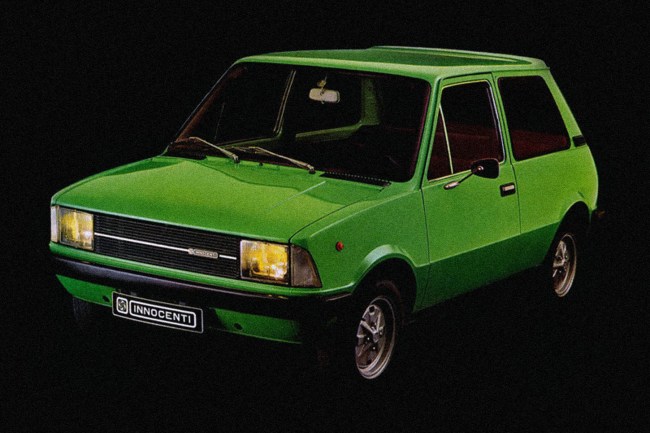 Motor magazine Road Test, August 1979: Innocenti Mini De Tomaso
"Enginewise it’s the familiar A-series in 998cc form in the 90, and 1275cc form in the 120 and the de Tomaso, but performance-wise they’re like nothing that’s been seen in this country since the days of the Coopers. The 998, for example, is rated at 49bhp (DIN), 10bhp more than the UK version, while our own 1275GT’s 55bhp looks distinctly weedy compared to the 65bhp (DIN) of the 120, or the 71bhp (74 on 1978 models) of the de Tomaso.
In fact the latter is to all intents and purposes in Cooper ‘S’ tune, though it uses a single 1.25in SU in place of the S’s twin 1.25s, and has an ordinary 1275 camshaft, advanced by 4 degrees, rather than the old S’s wider-overlap grind. What’s more, these pokey units are not specially breathed upon by some Italian tuning wizard, but are actually produced in the UK and then shipped out to the Italian manufacturer, which makes you wonder what’s to stop BL from slotting them into the 1275GT; excuses about ‘rationalisation’ begin to sound a bit hollow….."

Had they intoduced it, there would've been no Metro, and the Mini would've never reached legendary status

OK sure, the Innocenti may not have been the 'answer' that BL wanted, but it was better than what BL were doing with the Mini - nothing !!  Then again, did the Mini really need tinkering with in the first place?

The original Mini, in my own opinion, was a pretty remarkable car, right out of the box, though Mum's did want a 4 door, which lead them to but one from the 1100 range (and that became Australia's top selling car in the early 70's).

The Metro was originally intended to replace the Mini and was a very very long time coming, though, ended up as we know, running parallel to the Mini - for a while,,,

What they should have introduced is the Minki     http://www.austinmem...d-29/index.html

I had a pal who had a one of the 1275 ones back in the 80's, it took four adults down to Northern Spain and back, they did the route through France and managed it in day and returned good MPG - he was Italian and loved all their cars, so this worked well for him and his daily commute from Surrey to London.

I thought it looked like a fantastic car, but never really believed his claims about the power output until the feature above....

they rusted quickly in the UK - but went like stink

they reminded me of the fiat 127

a more fun car than the Metro to drive , but as I said they did rust quite quickly

I believe they used standard Mini subframes and rubber cone suspension when fitted with the Minis A-series engine and gearbox. Not sure about the later non-A-series versions?

I believe they used standard Mini subframes and rubber cone suspension when fitted with the Minis A-series engine and gearbox. Not sure about the later non-A-series versions?

Certainly the A-series models used standard Mini subframes and rubber cones. I have an original workshop parts book for the 90 and 120 in my workshop which shows standard mini subframes. As for the Daihatsu 3-cyl engined models I have no idea, never actually seen one in the flesh.

they did seem weird , a mini engine in what was similar to a fiat engine bay (looked that way to me)

IIRC one engine looked a bit like a charade engine