Double British Rally champion Russell Brookes, famous for driving his 'Andrews Heat for Hire' liveried cars, has passed away at the age of 74.
"In his career Brookes drove everything from Minis, Talbot Sunbeam Lotus, Lancia Delta Integrales, Porsche 911s and Opel Kadetts - as well as his trusty Escorts and Mantas - in a career which spanned three decades as he retired from regular competition at the end of 1991.
He still competed in sporadic events and even won the historic-based RAC Rally in 1997, and was still giving demos in his eclectic cars last year - a regular at events like Rallyday and Race Retro."
https://www.autospor...on-brookes-dies

The Heat they wouldn't Hire - (Motorsport magazine, Dec 2005)
Russell's friend Roger Platt devised a way of rallying on the cheap which involved buying a car from the local car auction for £25 or less on a Thursday, preparing it for the weekend, doing the rally and then selling it back for about the same price the following Thursday: "A Vauxhall Velox was always a good bet. We even rallied an XK120 once but that cost £50." During the same period he hillclimbed and sprinted a Mini 850 and managed to capture a host of class records at a variety of venues.
Then his father died, and with him the family business. At that time Brookes was studying as a quantity surveyor and worked for his qualifications at a big company in the Midlands. Once qualified he left: "They insisted that I work Saturdays, which interfered with my rallying. I joined a smaller company but they soon found out what I was about and sacked me." After this he got a job that was less demanding of his spare time, as a technical correspondent with British Leyland: "I was the man who wrote to all the people with broken gearboxes and said, 'Dear Sir, You have been singularly unfortunate... ' whereupon they would write back and say, 'I have been singularly unfortunate four times already.'
Brookes plunged into his rallying at the deep end with full special stage internationals. He shared the driving in Platt's Cooper S 1275 on the 1968 Gulf London and went straight from that to entering the RAC Rally that November in his own Mini 850. These outings were non-productive but the following year he did the Welsh, Scottish and RAC Rallies, winning his class in Wales and then taking third and second on the other two. When he won his class again on the 1970 Welsh, Skoda UK offered him a 1000MB for the Scottish: "It must be the worst rally car I have ever driven."

For 1971 Brookes picked up some sponsorship from Cal Withers, but it involved doing all the Castrol/Motoring News  rounds as well as his favourite internationals: "Up to this point I'd really only done international rallies and I had got a bit spoilt. There were always good bonus payments to be picked up in the classes. In fact I was probably running at a profit, but it soon changed when I had to do the MN events as well. They had no bonus schemes and took as much out of the car as an international would. By the time the RAC came around I was practically broke." Desperate for some way of doing Britain's premier event, he scraped together everything he had, but then disaster struck — his engine tuner went bust and the receiver impounded Russell's own engine and gearbox: "I already knew Basil Wales at (Leyland) Special Tuning. He agreed to loan me a unit that was lying around. It was the last works engine to be built and had a full eight-port head plus four Amal carburettors. Not ideal for rallying as they were stuck out in front, where they proved susceptible to icing." But at least he could do the rally and it turned out to be a key event in his career.

Dotted throughout what turned out to be a very snowy forest rally were a number of tarmac stages. It was here that a certain Cooper S shone by setting times that even in such exalted company could not be ignored. Brookes and co-driver Ian Cooper got the car through all kinds of maladies: "We actually arrived at the Donington Park control out of time. But when we got to the finish we discovered that we were credited with being 66th overall. It wasn't until 20 years later that Les Needham (secretary of the RAC Rally) confessed that he had shuffled that time card out of the way to allow us to be classified as a finisher."

As far as Brookes was concerned that was it. He had done his best, spent his all and now he was retired. He even stopped taking Motoring News and was thus not aware that at the beginning of 1972 Ford had launched its Mexico Championship. This was designed to provide low-cost rallying as well as a level playing field on which future works drivers could be identified: "I was at home one night when there was a knock on the door and Mike and Keith Hill of Brooklyn Garages wanted to know if I would drive their Mexico. Apparently they had seen me in the Mini on Epynt and were suitably impressed." Naturally, the answer was an emphatic yes. In its first year the Mexico Championship comprised mainly navigation rallies, so a Mini loaned by Tom Seal was brought out for the internationals, finally winning its class on the RAC Rally ahead of all the Skodas..... 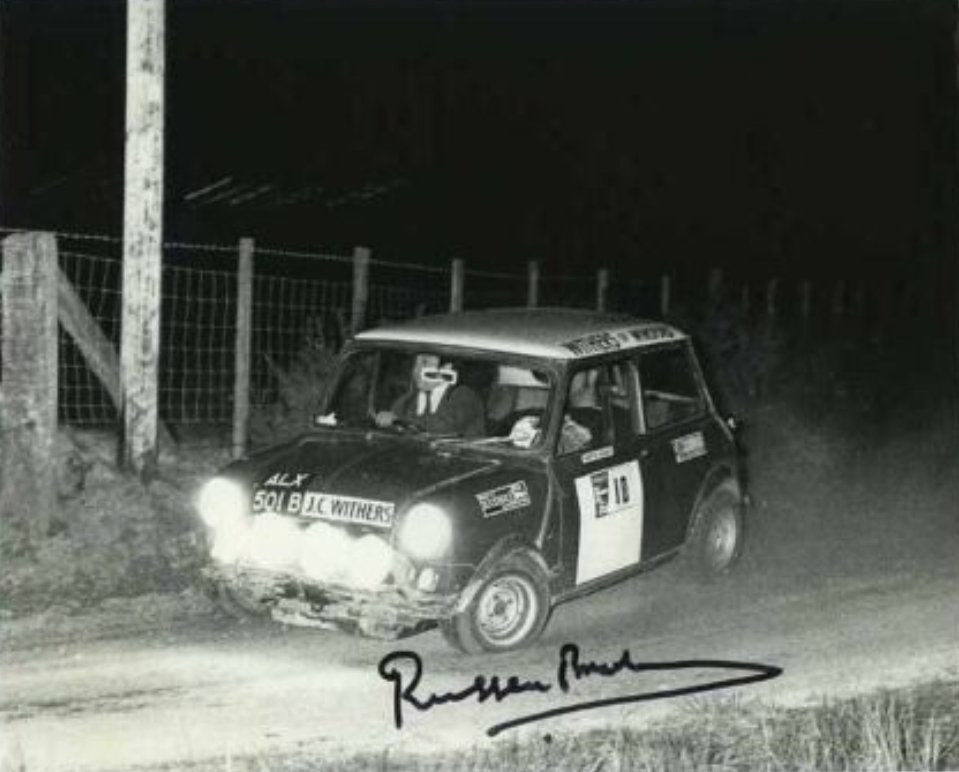 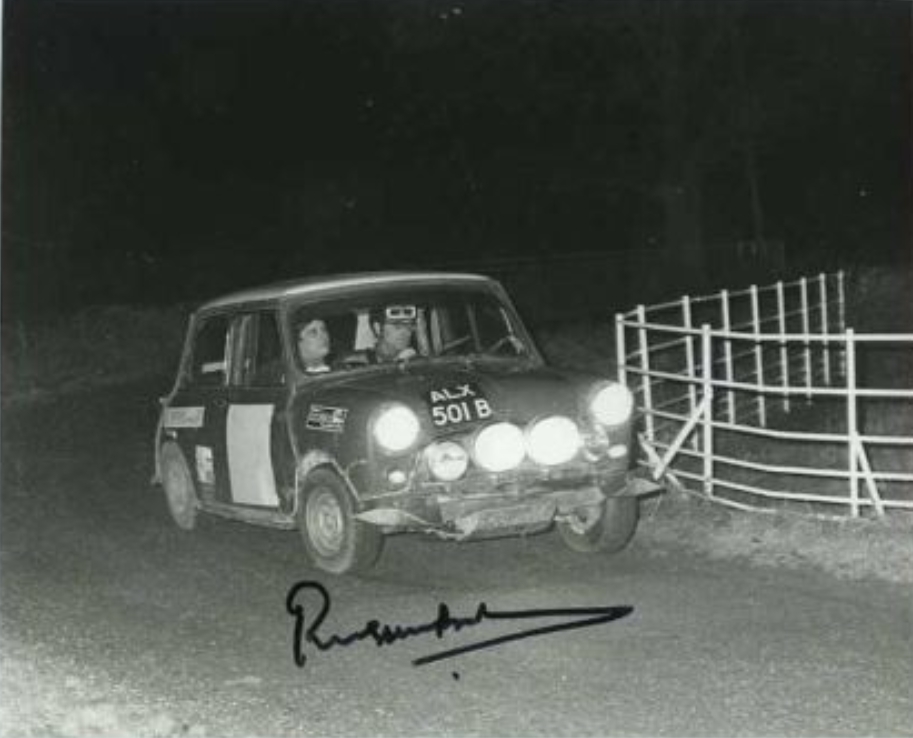 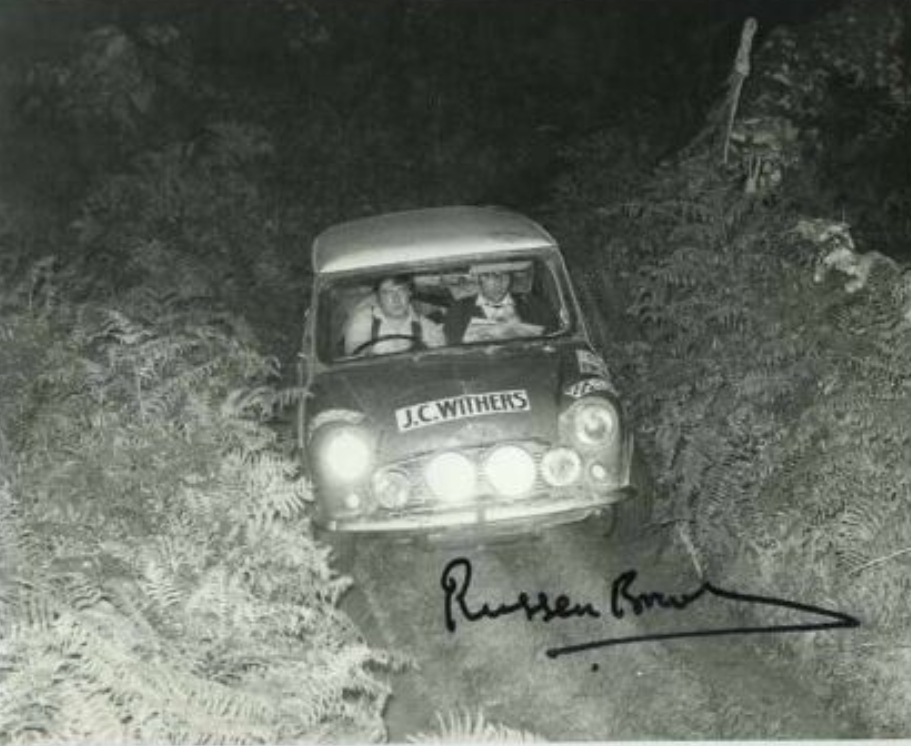 That has really saddened me.

Russell was a good friend of mine ever since I helped him to get his Mini home from the end of the 1971 RAC Rally when I found him is a petrol station in Harrogate trying to fix it on his own.

He was a really nice guy and very helpful to younger drivers.

I was due to share a table with him at a recent motor sport dinner and he couldn't be there as he was unwell.

He is a great loss to motor-sport and my thoughts are with his wife at this time.

Very sad. It was rallying in the 80’s that got me interested in motorsport, I drifted to circuit racing but always enjoyed a day in the forests before rallying was sanitised. RIP Stumpy.