Testing and Adjusting the Fuel Gauge

This covers Minis and Mokes from about 1963-ish to early 90's fitted with the Stabilised Smiths Gauges, these have the Voltage Stabiliser (or more accurately, Voltage Regulator).

The photos shown in this guide are from a Centre Speedo set up, though the off-set Clocks work the same way. It doesn't cover the Nippon Gauges for the Gauge Adjustment, only the Smiths types.

These gauges work from a stable 10 Volt Supply, provided by the Stabiliser. The original Stabilisers worked on a Vibrating reed principal. These are an Electro-mechanical Stabiliser. Inside there's an electro-magnet and an armature that's spring loaded (or a spring steel strip), and a set of points on the end of that. The Electro-magnet draws the Armature breaking the current to the Coil and allowing it to reset, this continues on an on going basis and as the parts are small and light, they vibrate very fast and but tuning exactly when the points break the current, the Average Output Voltage is reduced, in our case, it Averages out at 10 Volts. If you were to look at this output on an Oscilloscope, you'll see in fact it's pulsed 12 Volts, but Averaged out over the On / Off time, it appears as 10 Volts. You can usually see the adjusting screw on these type of Stabilisers, usually with a smear of epoxy resin over the slot of it. The modern replacements all now seem to be Electronic and so give a steady Regulated 10 Volt Output.

The Gauge itself is a Thermal type of Gauge, were they have a Bi-metal strip in them, that's over wound with a heating element. The Bi-metal strip is a small thin strip of 2 pieces of different metals that are laminated together. The rate of thermal expansion of these metals is quite different to each other, so as they heat and cool, the strip bends. In the case of our Fuel Gauges, the metal strip is internally linked to the needle that gives us an indication on the scale we can see usually from the driver's seat!

They having slightly different technical specifications, the Temperature gauge is of the same basic design.

Thermal Gauges are used as they have a slow reaction time, you normally see this when you turn the key on and it takes around 30 seconds to get a reading on the Gauge. This is so that as the fuel in the tank sloshes around while driving, the Gauge can't react as fast as the fuel is sloshing and gives a stable readable indication, otherwise, with the movement of the vehicle, the needle would swing from one end of the scale to the other quick quickly giving readings that would be meaningless.

The Voltage actually applied  across the Gauge is varied by the Fuel Tank Sender. This is essentially a Variable Resistor that's connected to a Float by an arm with a sweep that pretty much covers from top to bottom of the fuel tank.

How it's Connected Up 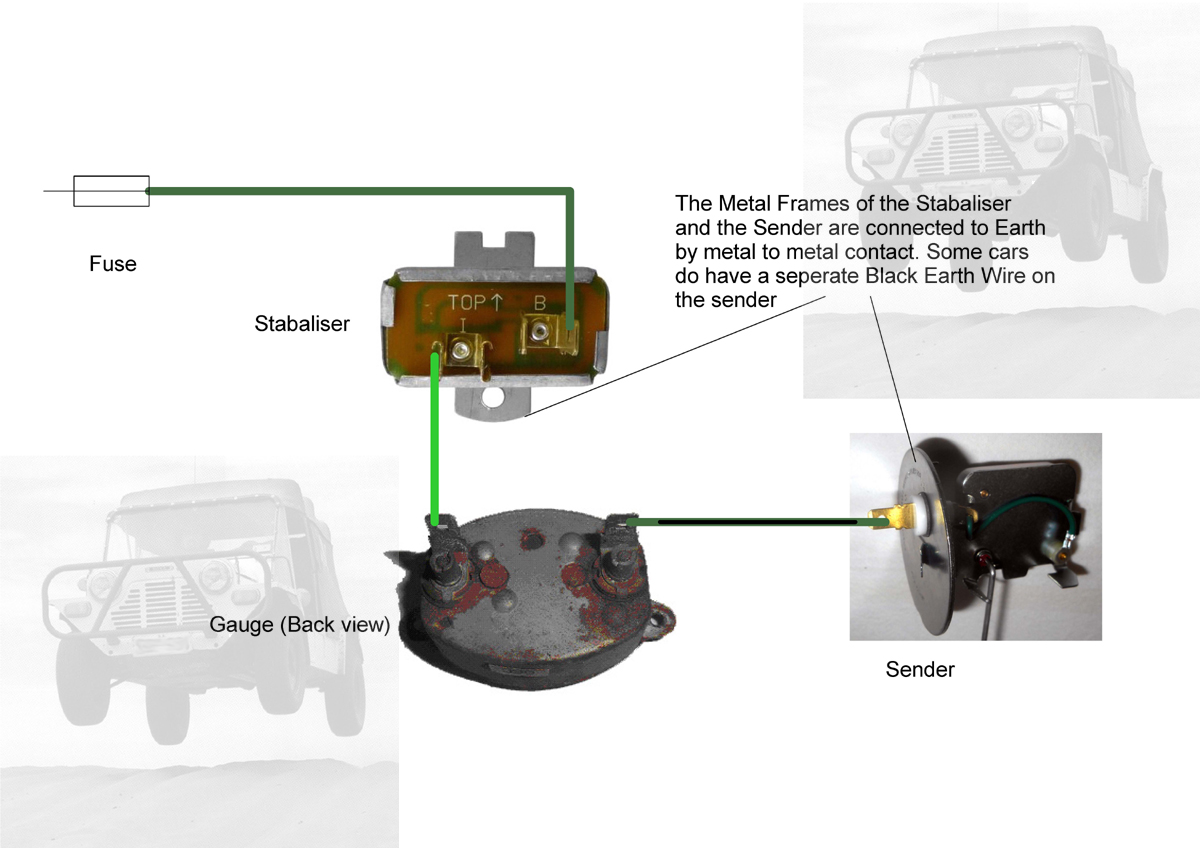 Wire Colours should be as per the diagram above;-

A quick test is to remove the Green / Black wire from the Sender and Earth it. Then turn the key ON for about 5 Seconds, the Gauge should shoot up to Full (or even just beyond). Don't leave the Key on for more than about 10 seconds as it will damage the Gauge.

If that does not work then there could be a few different issues causing this, (or a combination);-

With a Multimeter, you'll need to work through each item to find the issue. I'd likely start at the B terminal of the Stabiliser, check you have 12 Volts there.

Then Check the Output of the Stabiliser, however, be aware, if it is an original Vibrating Reed type, the Measured Voltage on most Multimeters will likely be gibberish on a digital meter with it not showing a Stable Voltage, but one that jumps probably from around 4 - 5 volts up to as mush as 17 or so, it will change very quickly and this maybe normal, though for now, it does show it has output. If it's an Electronic Stabiliser, it should show a steady 10 Volts (+ or - about 0.5 volts).

Ideally, if the Stabiliser you have is a Vibrating Reed type, the best way to test it is with a Thermal Volt Meter, which, like the Fuel Gauge itself, is slow acting. The Smiths Voltmeter works on this principal (and that's why it's slow to move) and it's output can be fairly accurately checked with one of these - if you have one ! With the cost of a new Stabiliser vs buying a Gauge or Meter to test it, you'd usually be better off just replacing the Stabiliser if in doubt of it.

Next, with the Sender Wire disconnected at the Sender, check the Voltage on the Back of the Gauge, on the Terminal connected to the Green / Black Wire. This should be similar  Voltage to that seen on the output of the Stabiliser. If not, they the Gauge is likely damaged.

From here, it's a matter of doing some continuity tests on the wire to the Sender, which can be tackled in the same way as the last test, only at the Sender itself.

If you have found that Shorting the Green / Black wire to Earth works as per that above, then time to test and Calibrate the Gauge itself.

If you dive in to your local Electronics Component supplier and grab yourself some resistors for starters;-

One of our local suppliers is Jay Car Electronics (they are also in the UK) and I have quoted their catalogue numbers here in the brackets. These are only about 50 pence / cents each, so won't break the bank.

Access to the Sender Wire on the Fuel Tank, this is the Green / Black Wire.

If this checks out, then the Gauge and the Regulator would likely be OK.

If it works but the 1/4 and Full numbers are a long way off, the gauge needs calibrating (and it needs to be removed from the speedo for that).

On the back of the Gauge, there's a couple of Plugs that give access to the Adjusters 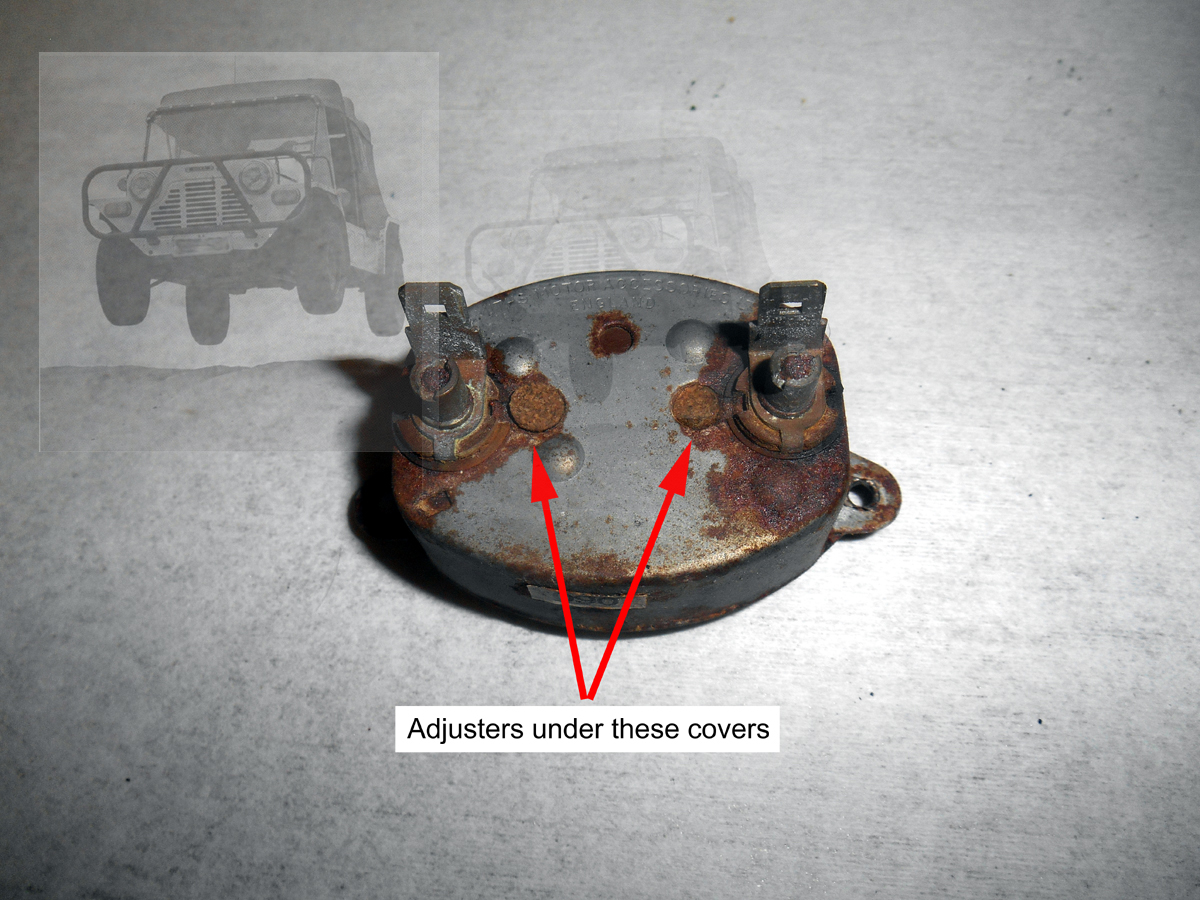 You'll need to tweak these but only by a very small movement, they are not a screw, but they adjust the stops inside the Gauge directly. 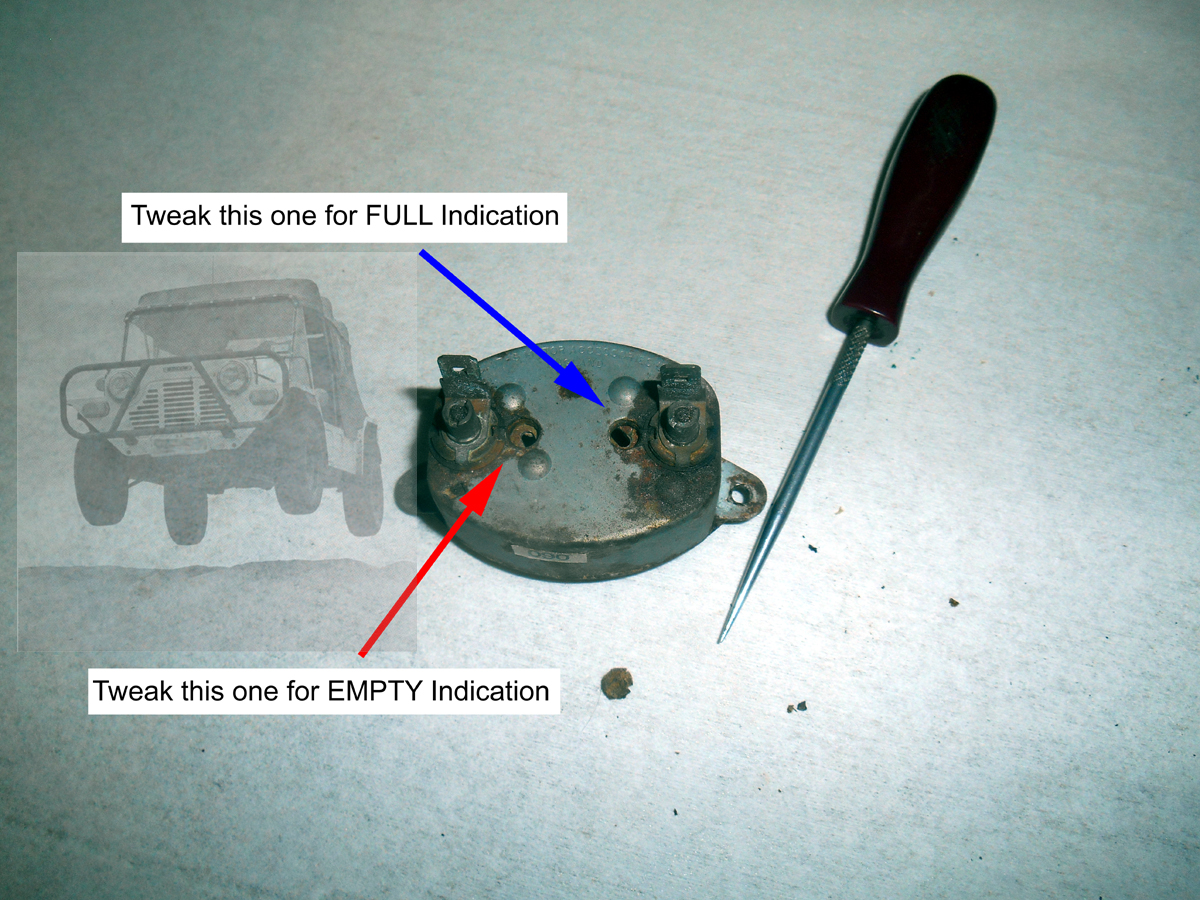 You'll need to go back and forth between these two adjusters as tweaking one doe have an effect on the other end. Eventually, you should land where it should be right, but it's not over yet!

Connect up the 220 Ohm Resistor and check the Gauge shows just a hair over Empty, it will be around the top side of the line in fact.

If it works but the Full reading is low or high, then possibly the Regulator needs checking (and replacing ?)

CAUTION: The sender will need to be removed from the fuel tank to do these checks. You'll want to have less than 1/4 of a tank before removing the sender and also be very mindful that petrol fumes will be released while the sender is out, so don't gas yourself here and likewise, be mindful of flames, cigarettes and sparks.

Remove the sender by twisting the retainer in an anti-clockwise direction, they often need a tap to get them moving. With it out, be sure to drain any fuel that's inside the small box that's on the back side of the mounting plate.

Check the float doesn't have any fuel in it, if it does, you'll want to replace it.

Check the Arm moves completely freely and easily from one stop to the other and back again.

With the sender on the bench, measure the resistance of it between the Insulated Terminal and the Frame of it.

With the Arm held up in the Full Position, the resistance should be 33 ohms. In the Empty Position, it should be 240 ohms. It won't likely be exactly these numbers, but ideally as close as they can be, the better, ie, on the Full end, 30 to 36 ohms would be OK and Empty, 230 to 250 ohms would also be OK.

If you find these are off, there is a limited adjustment on the Sender 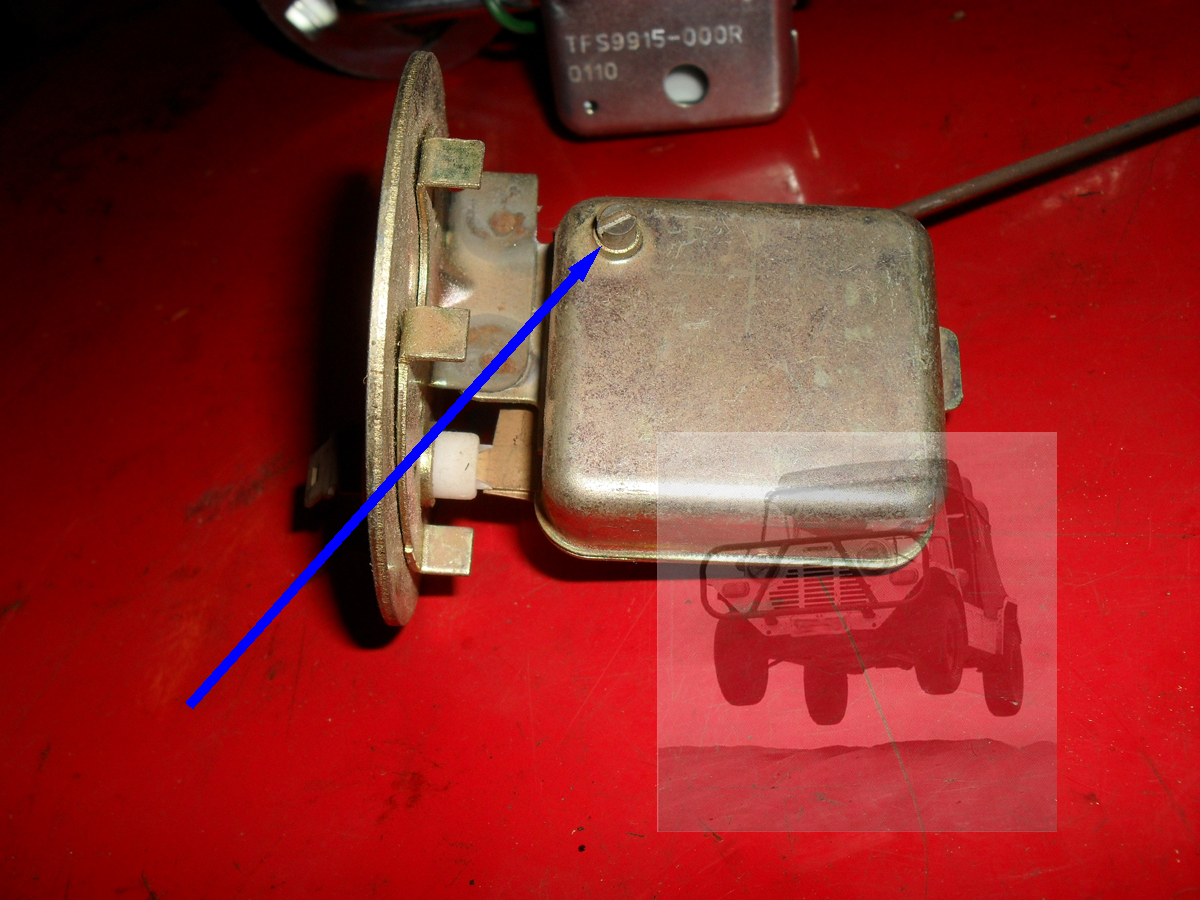 By moving the Adjuster as indicated with the Blue Arrow, a little the Resistance range can be moved. This will move the entire Range, it's not an adjuster for the Full or Empty ends, but will change them both.

If you find you can't achieve the Resistances needed and they are a fair way off, you can adjust the Gauge, as described above, to match them together, only, instead of using the Resistors, you'd use the Sender in their place.

Finally, before fitting the sender back in the Tank, be sure the Arm and Float aren't going to foul on anything inside the tank, eg, on some cars, the Filler Neck extends some way inside the Tank and on the Injected cars, there's a Pump within the Tank. You may need to fit the Sender with some string coming out of the Filler Neck attached to the Arm so you can move the Arm to check for this.