From Another Era (Motorsport Magazine - August 1989)

From Another ERA (Motorsport magazine - August 1989)

ERA Mini Turbo - Author Jeremy Walton
"Before I drove a small green 1.3-litre Mini at the SMMT test-day at Donington, one sporting an ungainly black body-kit and a turbocharger crammed within that diminutive engine bay, I through it must be a joke in poor taste. The association of English Racing Automobiles’ hallowed initials (ERA) and a turbocharged Mini derivative made me wonder if this really was 1989?
In fact the ERA initials now stand for Engineering Research and Application Ltd, a descendant of the racing car manufacturer which has apparently prospered to the point where a full Type Approval programme over two years and the construction of more than 22 cars could be absorbed before a single sale. And I am delighted to report a most convincing development in the Mini’s road-going abilities, one which will be available via Rover dealerships at an anticipated £12,000 during July.
Motor Sport was aware of the ERA project with some of the original prototype engineering, and the Mini bravely developed around an original 140 bhp. That set the little wheels scrabbling, but now the chassis engineering is exemplary in restraining much less horsepower.
The Donington cars were accurate forecasts of what the public will be offered. That means “approximately” 100 bhp from the Garrett T3 turbocharged A-series (carburated by what used to be called an SU), a modified version of the MG Metro turbo power plant with ERA Electronic Control circuitry.
Boosted to 0.6-bar/8.5 psi on an undisclosed compression ratio, the Mini City body shell batted over Donington tarmac at an indicated 100 mph. overall, it proved capable of performance on a par with a standard Ford XR3i, but more entertaining.
Cornering performance brings respect back to the Mini name. it jinks with all the old precision, but the Dunlop D3 rubber of 165/60 profiles on 6J x 13 alloy wheels, and substantial suspension modifications, allow far more grip than the Mini Cooper S-type, for which ERA sees it as a logical replacement.
From its tastefully revamped interior and complement of VDO dials to its outstanding four-piston calliper front disc brakes, this private initiative meant civilised fun.
Civilised? A sporting version of a 30-year-old model? It cannot be possible. Yet it is, considerably and the boost curve is graduated in a manner that puts the MG Metro to shame. There is perceptible boost from just under 2000 rpm upward, and the unit sounds like a lusty worker at 6000 rpm rather than a candidate for the dustbin.
However, since Lotus and Rover Group graduated that turbo Metro to avoid straining the delicate and integral transmission, we hope an adequate margin of strength has been allowed for the still obstinately four speed gearbox.
Snags are mostly in this cynical mind. ERA has undoubtedly devoted conscientious time and money on developing the Mini to a standard of excellence the factory long ago abandoned as unrealistic, but the underbonnet layout does exhibit high temperatures and considerable complexity. Little short of 100°C was the norm on a 27°C day.
I expect a Sprintex-supercharged rival from KAT to the announced shortly, confirming that the Mini is still a sweetheart amongst the specialists." JW
https://www.motorspo.../mra-mini-turbo 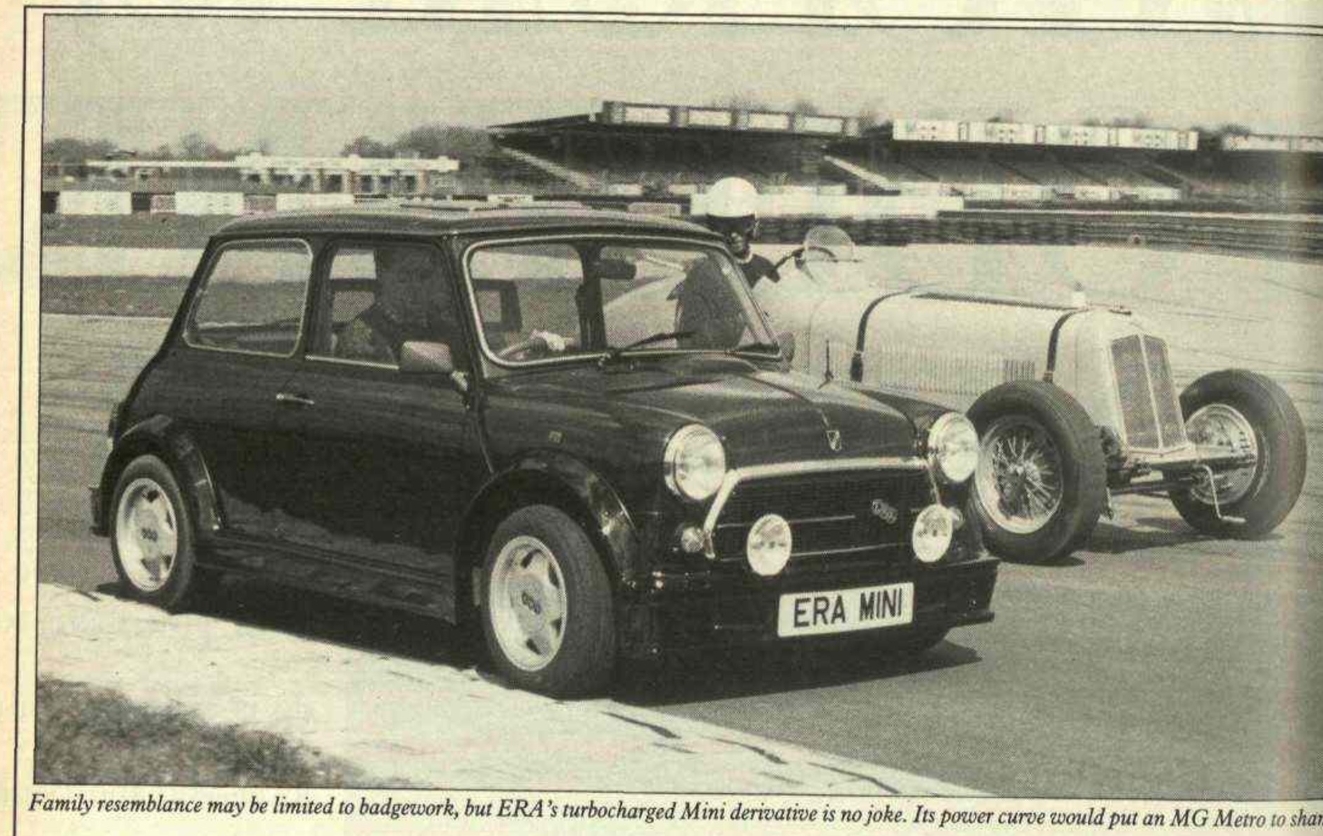 I cried the day i failed to find replacements despite having the help of Falkens UK Importer to check stock across the whole of Europe.