Celebrating 20 Years Of The Bmw Mini

Interesting article below including the inside story of how Cowley was prepared for MINI production in 2001 while moving the Rover 75 production line to Longbridge...

In 1959, BMC launched what became the most iconic of all British cars: the Mini. In 2001, BMW did it all over again. We look back on the past two decades of the brand.
by Hilton Holloway (Autocar magazine 11th April 2021)

"It takes just a short hour on a group call with employees at Mini Oxford for us to get a very strong sense of just how unique the Mini brand remains, even though it’s part of a huge corporate company in the BMW Group.
Talking to people who have been part of the reinvention of the brand over more than 20 years, it’s a surprise to hear tales of experimentation, can-do engineering and production and a remarkable freedom to find its own way.
By some margin, the veteran of the roundtable assembled by Mini Oxford is Mick Fisher, the longest-serving employee at the factory. He started his apprenticeship at Longbridge in 1967, around the time of the disastrous creation of British Leyland. Indeed, when he joined Austin, the original Mini was just eight years old.
After working on the installation of the Mini Metro at Longbridge, Fisher moved to Oxford to work on the installation of the Austin Maestro and Montego production lines ahead of those cars’ 1982 and 1984 launches – and he’s still there.

The roots of the new Mini project go quite some way back. Twenty-seven years back, in fact, when a small, conservative car maker from Germany bought the Rover Group from British Aerospace (BAe). The automotive world was aghast.
Rumour was that BMW really wanted to buy Land Rover (it was supplying a diesel engine for the upcoming Range Rover 2). BAe insisted that they take the lot. BMW was bent on expansion into new markets, including about-to-bloom SUVs and city cars, but it wasn’t sure the BMW badge was the way it could do so. Buying the Rover Group and its historic brands must have seemed like a remarkable opportunity.
Bizarrely, it turned out that then BMW boss Bernd Pischetsrieder was the great-nephew of Sir Alec Issigonis, the brains behind the original Mini, who died in 1988. Pischetsrieder is even said to have visited Issigonis in Birmingham as a child.

A reinvention of the Mini was probably the hottest topic that came out of the takeover. It would actually take a bit over seven years for the first new Mini to roll out of the factory, but both Rover and BMW stylists were straight out of the blocks in 1994 working on competing visions of a new-generation Mini.
Roughly, Rover’s thinkers wanted to preserve the sophisticated suspension of the original, as well as its extraordinary interior packaging. BMW had other ideas, crystallised in a kind of reinvention of the Mini Cooper S rally cars: a Mini that was about driving dynamics.
The speed of choosing the design theme – in October 1995 using sketches by BMW’s Frank Stephenson – certainly wasn’t matched by the speed of the engineering. While the design was being worked up by Stephenson and Rover’s David Saddington, the engineering gestation of the Mini was getting lost somewhere between Gaydon and Munich.

Two of the final concepts for the Mini were unveiled in 1997: Rover’s sophisticated midengined one-box Spiritual and, from the BMW studio, the ACV30 two-door coupé, which was clearly a tribute to the Monte Carlo Rally Minis.
The final form of the new Mini appeared briefly on a stage in a warehouse the night before the 1997 Frankfurt motor show.


One of the people on our video call is Tom Festa, who is currently a future models integration engineer at Mini Oxford, liaising with BMW to ensure that new cars can be built at the factory. Festa remembers attending a meeting reviewing the engineering concepts for the new Mini in 1998.
He recalls: “I met Wolfgang Reitzle [BMW’s hugely influential product chief] and remember the stiffness targets of 30,000Nm per degree; I thought: ‘Wow, we’re in sports car territory here.’ The view was: ‘If the product is right, the business looks after itself.’”
Interestingly, over the course of our chat, it becomes clear that while the Mini’s ambling gestation was less than ideal for the ailing Rover Group, it allowed BMW to see how the Mini could become much more than a solitary halo model; more of a stand-alone brand than Audi’s 1998 TT coupé, for example. Early projections had the Mini down as selling as few as 40,000 units per year. The planned (and indeed half-finished) Mini body assembly hall at Longbridge was suitably modest in scope.

Jason Field, an IT expert at Oxford, was at a meeting in Regensburg, Germany, when BMW announced it was selling the Rover Group in March 2000. It had, after government and media pressure, disposed of heavily loss-making Rover cars and Longbridge to an ex-management team for £10. The Mini project would be retained by BMW and transferred to the Oxford plant that was at the time building the 18-month-old Rover 75.
The upshot was that the 75 production line at Oxford had to be lifted and shifted to Longbridge and the new Mini installed at Oxford instead.
“It was a unique task: we had to decommission the 75 line and move it,” says Fisher. “The 75 line was scheduled to run until the end of 2000 before we closed it down. We had to fit [the Mini] into what existed; it had to fit inside the plant.”
The team at Oxford had roughly nine months to completely refit the factory, turning it into a BMW plant and get an all-new model rolling off the production lines.
Festa says that by the time the Mini was heading for Cowley (now renamed BMW Oxford), sales estimates had risen to 90,000 per year. Field adds: “It was becoming obvious in the summer and autumn [of 2000] just how popular the car would be. Driving prototypes, I felt like a VIP. People would just flock around.”
“It then became clear we were looking at 100,000 to 110,000 cars in a full year. And it was clear that BMW would need all the capacity at the Swindon [body pressing] plant,” says Festa. It was a run rate rather greater than the slow-selling 75 saloon was managing.

It wasn’t just the task of swapping production lines that was a huge problem to solve. Field recalls that an entirely new IT system, networks and telephones had to be installed: “It was just food, work and sleep for months.”
Kimberley Ragousis, BMW UK Manufacturing’s communications manager, points out that this newest BMW plant also needed to completely reboot its industrial relations. There were “lots of change management and new shift patterns” as part of Mini’s integration.
The way the factory team managed to pull the Mini into existence in record time and in tight space (originally considered suitable for an annual 125,000 units of the 75) clearly impressed BMW.
“The early days were a proving ground for trying things out. It was fantastic. There was a can-do Mini spirit,” says Festa. “There’s a unique feel to Oxford: we always look to see what we can do.”
This was a result of Cowley (as it was under Rover) being treated as the poor relation of Longbridge, according to Festa. “The attitude from Rover was often ‘there’s no money’,” he says. “That teaches you to engineer solutions.”
The Full Article continued here:-
https://www.autocar....-years-bmw-mini

I have a weird connection to the new and old Minis in relation to this topic.

In 2000 I couldn't have cared less about either, I had no interest in classics and no money to buy new cars (so no interest in the new ones either). I was mostly interested in Hondas (still would be if I had more garage space).

Roll forward 4-5 years and we bought our first classic. Test driving it changed my mind completely, from derision to infatuation. At that point the MINI became a thing to point and sneer at.

Roll forward another 10-11 years and we had bought a cheap R50. While it didn't become an infatuation I will now readily recommend them instead of classics for first time drivers or people on a tight budget.

Roll forward again another couple of years and we've now had an R50, a couple of R53s, a broken R56 and an R55. And when planning the next project, I would previously have bought another classic but I just can't deal with prices they go for now when I can get an R53 for <£1000.

All in, good cars and we've mostly got through the daft 'hate all moderns' rubbish that infested the scene. In fact if you want an example of a Mini club that embodies the clubs of old, look at 'R53 Owners' - very active, very helpful and containing all types from all backgrounds.

"Say hello to our latest project car: a 2000 R50 MINI One. As an early example of the car that took the Mini nameplate into the 21st Century, the R50 MINI is fast becoming a modern classic – and one that’s far cheaper to buy than the car that inspired it.

We’ve taken our  R50 MINI on board to see how a cheap early example of BMW’s MINI stacks up as an ownership proposition. Our Y-reg car cost just over £400 at auction in 2020, albeit with an MoT due and some issues to take care of.

Here, we’ll chronicle our experiences with our MINI One as the project progresses. Keep an eye out for the latest additions." 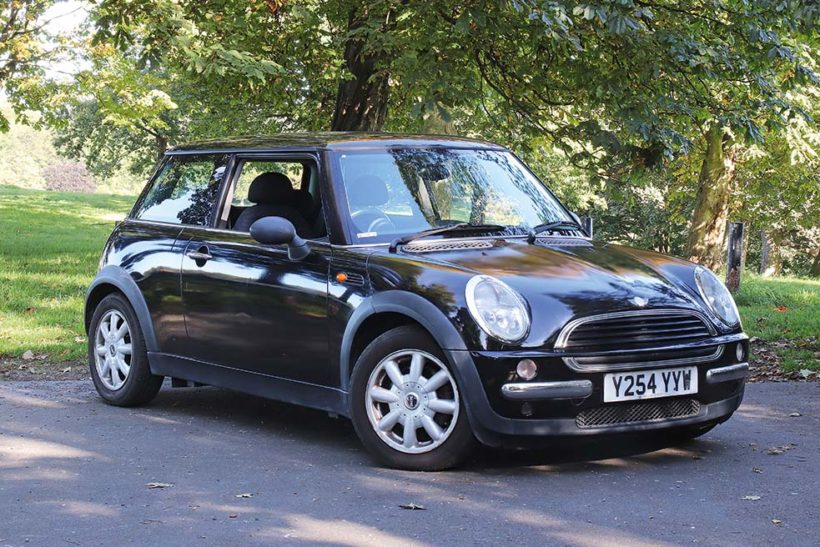