I am approaching the final stages of my engine swap, the 998 engine has been pulled out and the engine bay has been prepped for installation of the 1275.

The car is a 1974 saloon, and the engine has come from a (I think) 1989 Metro, it has a pre-engaged starter, and a 65d Lucas electronic distributor.

I also understand that I need to make a jumper wire that goes between the small spade terminal  on the pre-engaged starter and the threaded post.

My question is, what gauge wire should I ideally use for the jumper wire?

I also have a question about the ignition system.

I was going to run the white wire in the car loom that ran from the ignition coil to the fuse box to the positive terminal on the new ignition coil, but I wanted to make sure that there wasn’t anything else I needed to do.

The 45d distributor on the 998 didn’t have a 12 volt (I assume) running from the coil to the distributor, is this just a power feed as the 65d is an electronic ignition?

I look forward to hearing from you,

It looks as though the wire between the coil and the distributor was possibly just placed there rather than it being the correct location, as the wiring diagram shows that the white and yellow wire from the distributor should actually go to the solenoid on the starter motor rather that the positive side of the ignition coil.

The wiring diagram I have looked at also shows a pink wire that runs from the positive terminal on the ignition coil to a ballast resistor, and then on to the ignition switch - I assume that if this is not present, then this is the wire that would be replaced with the white wire in the car loom that runs to the fuse box to give the ignition coil its 12v supply .

As part of the engine refresh, I bought a new coil (Mini Spares Part Number  - GCL 143) which says its

the standard non ballast coil as used on the late Mini with factory electronic ignition for use with 65D distributor.0.9ohms

So I assume I should be okay with this.

I'm sure I have read somewhere that the white yellow feed from the distributor to the starter motor solenoid is surplus to requirement, but I've done some additional searching, and I can't find where I saw this.

You assumptions in the first post were correct and white/yellow is a +ve feed to the electronics on the distributor and should come from the coil.

With your second post you are starting to get mixed up with a ballast ignition system which you don't have.

For the wire from the old solenoid to the spade terminal on the starter - I would use something quite heavy gauge here as the starter solenoid can pull quite a few amps.  Maybe around a 2mm wire, originally this would've been brown with a red trace.

You assumptions in the first post were correct and white/yellow is a +ve feed to the electronics on the distributor and should come from the coil.

With your second post you are starting to get mixed up with a ballast ignition system which you don't have.

For the wire from the old solenoid to the spade terminal on the starter - I would use something quite heavy gauge here as the starter solenoid can pull quite a few amps.  Maybe around a 2mm wire, originally this would've been brown with a red trace.

Thank you very much, on both points.

I've never felt comfortable with wiring, so I appreciate the guidance! I've ordered a reel of wire, so hopefully, I should be able to fire the new motor up at some point over the weekend...I've just got to get the engine in!

If it's a metro pre-engaged starter, it's worth comparing the position of the solenoid to the one on your 998cc (presuming this was also pre-engaged).  The solenoid was often positioned in a slightly different place on the metro starter, which creates fouling issues with the front panel for a round nose saloon (clubman is ok).

I'm fitting a metro preengaged starter to a clubman currently so will take a pic.

See here - it sticks out on the metro starter. 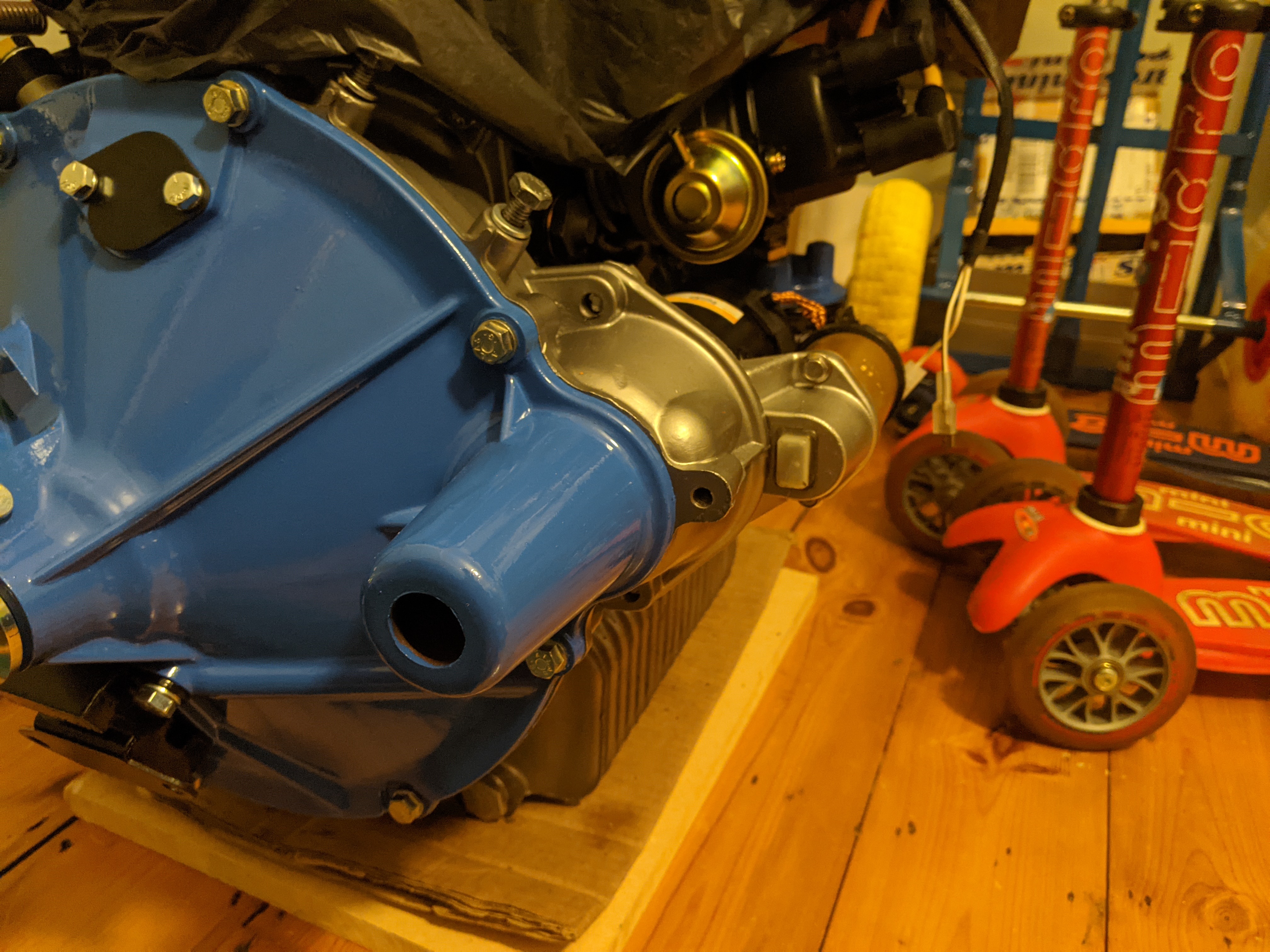 Thank you for the helpful advice, my 998 had a inertia starter, so was different.

I've had a look, and the solenoid is in the same position. Looks like I'm going to have to call Ivan at Minispares this morning to see if I can swing down tomorrow morning to pick up a more suitable replacement.

Cheers, you've saved me from a ton of heartache!

I've never had a problem with the Metro starter - yes clearance is less, but it has always gone in OK.

I'd certainly try it before splashing out on a new one - they're not cheap!

Thanks guys, I'm going to err on the side of caution so plan  to swing down to Mini Spares tomorrow morning, and pick up  the GXE 4527 pre-engaged starter motor, then I'll have it on hand should I need it. I'm currently doing the swap in my shared driveway, and my neighbours are getting slightly grumpy about the Mini being outside their conservatory.

It's only been there a week, but I don't want to have to wait a few days for the starter to arrive mail order, and endure more passive agressive comments if I run into an issue. Ideally I want the car back in its garage by the end of Sunday.

Mini Spares is only an hour away, so I should be back in plenty of time to do my chores, and get started with the installation.

Agree if you've got the time it's worth seeing if you can make it work before shelling out.