As some of you may already know, I've recently acquired a complete new engine and box for my Mk1, and as a result I'll soon be pulling out the current power unit with the intention to sell it. I've already had expressions of interest from a couple of local friends in the mini scene, and if one of them does buy off me I'll be giving them a bit of a "mates rates" deal as no doubt they'll give me a hand with the swap as well!

However with that in mind, I would still like to get an idea of the market value of my old engine + box so that we both get a fair deal, or if it falls through and I end up advertising it more widely. Here are some details of what I'll be selling...

- Pre-A+ 1275 engine, 12g1279 block casting, this is believed to be from an Austin 1300GT but unable to verify as missing its engine number tag, and unfortunately I know nothing about its history.

- 12g940 cylinder head, which looks to have had some porting work done. Appears to be 11 stud a-la 1300GT/Cooper S but the extra stud+bolt could just be there for show for all I know! Not sure on valve sizes. No bypass hose fitting.

- 22g1128 gearbox, 4 synchro remote. This is a BMC 1100/1300 type as it has the rubber sandwich fitting for the shift housing. Definitely sounds like a straight cut gear set, I was told by the original seller that it was an SCCR box which would also align with the engine+box having come out of a 1300GT. Don't know what the final drive ratio is but it's a lot higher than the 3.1 in my A+ 998, that's for sure!

Basically the engine will need a full rebuild before it goes into another mini, but it does currently run and drive, in fact it's still fitted to my car which I drove to Beaulieu and back a few weeks ago! It uses oil, doesn't have great oil pressure and is quite noisy, but even so it makes good power and I think it'd be a good basis for a rebuild to go into an early pre-A+ car.

Only other thing worth mentioning is I'll be keeping the rocker cover and putting a slightly tattier one on, and I may also need to keep some little bits like the water temp sender and oil pressure takeoff for my gauges to keep those working with the new engine.

Any opinions on value/worth would be greatly appreciated! Cheers all, 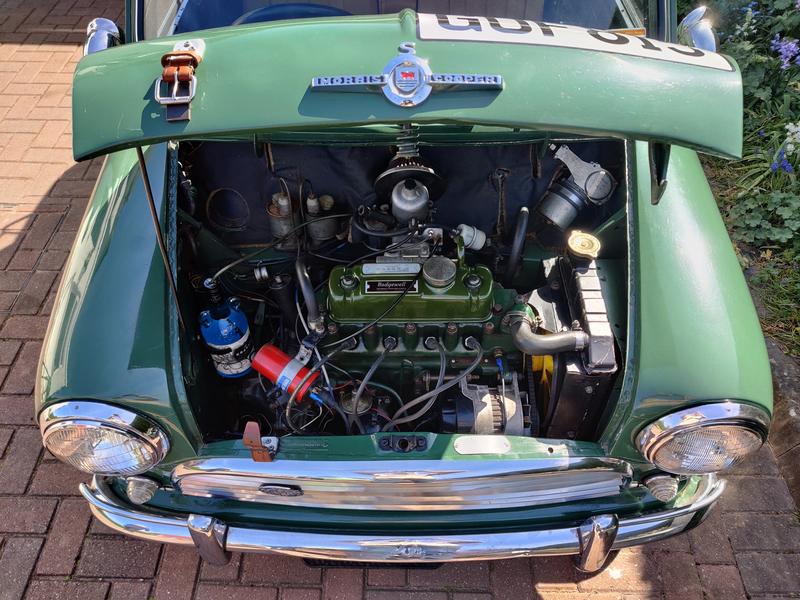