Worth watching even if you are not a fan of the new MINI. This is the media preview (from my own Mini tv video clips) of the New (then still a Rover) MINI on the eve of the Frankfurt Motor Show in September 1997. The news clips include an interview with the late John Cooper.

Quote from John Cooper at the preview launch of the new Rover MINI Cooper in 1997, as seen in the video interview:-

"I think its great (new MINI), its a Mini and its going to be the new MINI, its got a wheel in each corner, it looks like a Mini, I know its a little bigger and its had to be modified slightly for the safety regulations and that sort of thing but I think the team at Rovers have done a wonderful job on it actually and I'm very proud and I'm sure Issigonis in the 21st century would have been very proud of it if he had seen it."
John Cooper 1997

I was a manager at Mini customer service at the time.... we had 1000's of calls for more information (which we didn't have) the first i knew about the frankfurt launch was watching it on the news. I drove the Prototypes at gaydon a few months before that. After the first few calls in the morning, i started a spreadsheet and took peoples details in order to send out information when it became available i had about 15,000 names in the first week and still no info.
I eventually got sent 20 Postcards from the Mini Brand Manager to send out to anyone who was interested.... They really didn't have a clue.

come pick me up

This 'Insider' article posted below, found in an old issue of "CAR" magazine from July 2001, makes interesting reading................... 'a former Rover engineer tells at first hand the role Rover had to play in the development of the new MINI' :

A Former engineer is furious at BMW's claims that Rover had no involvement in the New Mini. It was, he claims, a very British affair.

Robin Ford doesn't fit the stereotypical image of the British automotive engineer. He's well spoken, articulate… and pretty fed up. Within hours of the last issue of CAR magazine hitting the streets, Ford had e-mailed us in anger at BMW's claims that 'Rover hadn't been much help' in designing and engineering the new Mini, especially in terms of the unique front-drive chassis.

'That made my blood boil' exclaims Ford. 'The brief from BMW was for a MacPherson strut front and Z-axle rear-axle layout. That was it. There are no BMW components in the systems and they were entirely designed at Rover's Gaydon engineering centre in Warwickshire. The geometry, component stiffness, durability, compliances – all were specified and designed by Rover engineers'.

Ford says he should know, because he was the front-axle system engineer responsible for the packaging, design and integration of the Mini chassis. 'When we started, very little was defined. BMW didn't ask for any BMW components, it let us go away and get on with it.

'Even the Mini's engine and transmission was engineered at Longbridge and Gaydon. The engine was worked on at Powertrain, who also did the gearbox, which is based on the unit used by Rover. The Cooper S uses a Getrag box, but the development was carried out at Longbridge. I'd say there were hundreds of British engineers on Mini, maybe as many as 300 or 400'.

From the outset, Ford reveals that it was Rover employees who turned BMW's vision into reality. 'We started development with simulators. There were two types: Rover 200s with a mock Mini chassis and 200s with the Mini's Pentagon engine. The supercharged K-series simulator was a cracking car. In the end, over 200 simulators were built at Longbridge and we learnt a lot. The idea was to get the design to what's called 'production release' a year or so before the Mini was due to go on sale. The Mini concept car the press saw at the Frankfurt show was built in summer 1997, with glassfibre panels taken straight off the clay styling model and then fitted to a Punto chassis. (See Video)

'We knew what the Mini had to be – the best handling front drive car in the world. We were very happy with a Z-axle concept, although it's not great for space. Some people also argued for double wishbones at the front, but BMW insisted that the Mini was a BMW and had to have struts. However, it wasn't easy to make the front suspension work. The Mini has a very compact front end.

'We worked very hard to minimise torque steer and the complexity and detail work in the chassis is on a much higher level than under a Puma or Lupo. Success has a lot to do with component stiffness. For example, the Mini has a two piece box section chassis arm with 1.5 metres of welding in it. The flex in the suspension components is less than 10 percent of that in the bushes. The stiffness of the mounting points is good for NVH'.

Ford says he is proudest of the Mini's steering system because, he claims, he was responsible for changing the system late in the day. 'Up until 1999, the Mini's steering was fully electric with a powered worm-drive. But it was almost surreal: there was no kick-back or feedback. On rutted roads you couldn't feel anything, even at the limit of adhesion. I had overall responsibility for the whole front end and didn't like it.

'The steering department said it could be fixed with a tweak to the steering, so BMW told us to get it sorted. But instead I knocked together a simulator with an electro-hydraulic Rover 25 rack. The original simulator had a Ford Escort rack modified for the right geometry and it felt good, but BMW drove both and chose mine. Fully electric steering was a pet project at Rover and several engineers had tried it in a Mondeo, where it worked well. It was just inappropriate in a Mini – there was no joy.

'It was very hard to package a steering pump on the Mini engine. It's extraordinarily tight under the bonnet. We had to re-write the rule book on tyre and component clearances. In fact we threw the rule book away. There's meant to be 15mm clearance for tyres. Now there is actually a benign foul in extreme circumstances. It was a packaging nightmare – or miracle – and only got done thanks to computer-aided design. We needed a lot of suspension travel to cope with bumps and the 17 inch wheels on the Cooper S were an absolute nightmare to accommodate. I think the sweetest handling Mini was one with smallest tyres – it's a pity the run-flat tyres were added late in the day'.

Robin Ford's involvement with the Mini came to an abrupt end in early 2000 when BMW suddenly asked for the Mini computer files to be hurriedly downloaded to German hard drives. 'BMW had finished the assembly building at Longbridge and wanted to ramp up production for a January 2001 on-sale date. It all looked fantastic when we went to a BMW pep talk in February 2000 explaining what they were going to do. The old dyed-in-the-wool Rover people were sceptical but I was taken in'. By mid March BMW's board announced it's intention to dispose of Rover and Ford left the project.

Now running his own sports car manufacturer, FBS, Ford looks back on Mini as 'a project apart. Some at Rover thought all the effort and money that went into Mini was a distraction from the main job at Rover'. And they might be right.

(mab01uk Note: Since this article was published a former Rover engineer on the MINI project at Cowley told me the above engineers name wasn't Robin Ford it was Robin Hall).

Quote from the now defunct FBS website seems to back this up:-
"Andrew Barber and Robin Hall have worked for some of the leading names in the motor industry, including Lotus, Ricardo, Prodrive and Rover. Taking the last of these as an example, they were both heavily involved in engineering the MINI (Barber on powertrain, Hall on front suspension) and are understandably keen to point out that the car was definitely developed in the UK, however much German money may have gone into the project."

Confused. Is it another car reshelled, or was it one of the very rare unregistered mini's

Yep, feature car last year in one of the mags I believe. Quality work.

Any one else notice the the RSP Cooper badges on the prototype?.....

if the rover had built the new mini and was still going would all the bini bashing *melons* of liked it?

Very interesting New report. I Wonder what Sir Issigonis would have actually thought of it, If only he Lived longer we would have an awsner to everything, maybe if Alec Approved of it MINI bashing wouldnt be here anyway.

Recently uploaded this interesting new extended 10 minute version of the 'New MINI preview in 1997' as first shown on the 'Men & Motors' TV channel at the time.......copied from some old vhs video tapes that I have recently started transferring over onto DVD.

Interviews with Nick Stephenson (Rover Group Design Director) and John Cooper at the 1997 Frankfurt Motor Show Preview of the New MINI. With BMW investment the MINI (R50) project was being designed and developed by Rover Engineers at Gaydon with production planned for the Longbridge factory.........

BMW bought rover for certain brand names. Used the vast experience of the engineers to design a new car. Then when it was all done, basically sent rover to the grave with huge debts that couldnt realistically be recovered from. True BINI bashers dont hate the car, they just hate its manufacturer and therefore what the BINI stands for, the end of Rover.

If it was made by Rover then true there probably wouldnt be any bashing, mainly because there would be no twisted background to its creation.

I'm no fan of the BINI as you can probably guess but i strongly disagree with any physical abuse towards the car/owners, done by people who are just using the atmosphere to be whats basically described as THUGS/CRIMINALS.

Please dont turn this into yet another BINI bashing thread!!!

Agreed,whilst we encourage open and frank discussions , these threads have a nasty habbit of turning ugly , usually by the same individuals on both sides of the argument , so lets keep it informative and not slip into the "same old ".

MINI Development Story updated on Austin Rover Online (AROnline)
Replacing the Mini was never going to be the work of a moment, and was generally regarded to be one of the toughest gigs in the industry. 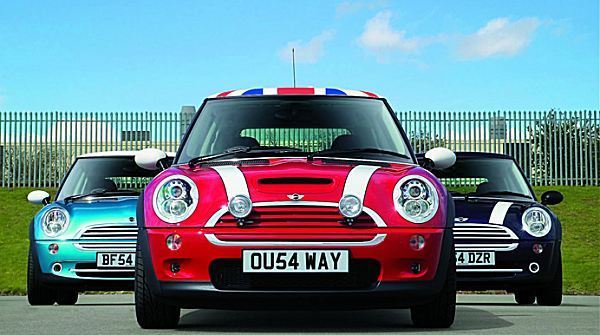 "After years of deliberation, Rover started serious work in 1993, which was soon bolstered by the arrival of BMW the following year. What we ended up with sparked controversy with enthusiasts, but the Rover engineered project ended up being a huge hit with buyers."