57 replies to this topic

My name is Andy.

I bought this little minter on the 22nd of April 08.

He is in superb condition with little to no rust

The chap I bought him from has got a Blue Watsons V-Tec conversion in a Clubby Estate and decided he wanted standard back doors, as he had a one piece fibreglass! Little bit of swapping later and now I have it

I have decided to buy Darren and Phil's R1 engine conversion kit with the Quaife LSD and K&N Filter.

Oh what a work of art! It is beautiful! Big thanks to Phil and Darren (even though he was away

I bought a 1999 4xv R1 Engine, loom and all other ancillaries in late Feb. Although it is still at my friend Pauls workshop so pictures will follow when collected.

I have decided upon Bucket seats which I picked up on eBay last month. They were Â£70 the pair delivered! Comfy, reclining and on sliders! oh and they fit... just. Have some ali 2x2 box which I am going to use to fab some sub frames. (pictures to follow)

So this is it! go go go! Ever so excited and I will keep all informed of progress!

love the clubby! will look amazing!

Been a busy bee today. Just got back from the pub so excuse tilly salk

I was just having an offer up to see if the bucket seats fit, and I was faced with four layers of that nasty tar stuff...

The only trouble was that where it had been fitted, they had not pushed down into the grooves, so any wet that came in had been sitting under it with nowhere to go!

This had caused a little bit of surface rust but nothing severe!

So loads of scraping and these two carrier bags full of tar later...

and we are 4kg lighter! I Know this stuff is also for sound proofing but hey ho

Also have removed seatbelt buckles and inertia reels as I am having 3 point harnesses.

Whilst on subject of seating etc here is a picture of one of my buckets...

Whilst removing the tar from floor I took the decision to remove the little metal box and rear seat support from the exhaust tunnel, as i didnâ€™t have any need for them and it will aid me getting the seats as far back as possible.

I also have a picture now of the fiberglass single back door, which will be yellow soon

Thatâ€™s all for now. Should be playing again next weekend!!!

Thanks for comments Ro8bieg and chubby blue

Nice project there mate, i will be keeping an eye on this project i think

I was hoping this project might come up on here!

Good luck with the project.

cool fair play, good to see another one of their kits being sold. Oh yeh your car looks stunning by the way

You have inspired me to ditch my rear ash tray, great idea!

Well its spread all over my garage floor as we speak so I'm sure Andy will be updating soon.

Still the coolant pipes from the head are very shiney now (pity they've got to be cut and welded DOH!!!!!!)
Just keep Damo away from that Auto-sol I'm sure he's sniffing in as much as he's applying

well done that man !! another new screamer in the making !!

Sorry for the delay in the updates!


Last weekend was setting to mount buckets. After allot of higery pokery I took the decision to get grinder happy, and Mr Angry came out of its little cave.

The side pockets which house the inertia reel were really dictating to me where I had to have the buckets.

Oh what an improvement! SO much more space and now buckets are spot on!

Weighed the cut out metal to just over 4Kg! so that is 8 in total after floor tar

Ok Moving on to the bucket seat fixings.

Decided upon making a bracket and welding behind the front cross member for both sliders. The rear of the sliders to have 2"x2" box and bolted threw the floor.

Made the brackets out of Suzuki Vitara radiator mounts which were cleaned and cut to look like this...

Then cut and bended to desired angle and welded...

Then welded behind the cross member...

Thanks so much to Damon for suggestion and welding!!!

Was then faced with a wee problem in mounting the rear of the harness.

Needed to find somewhere to mount to where if the worst were to happen, lets say a head on collision, the shear force wouldn’t just rip the bolt out from the surrounding area.

There are two methods I could use.

Bearing in mind the rear part of the harness needs to be at 45 degrees to the back of the bucket and it is not only me, but my passenger I need to be concerned about.

So while thinking it over, came up with a dual purpose piece of fab work!

A harness mount which when made and welded will also act as a rear strut brace!

Just so happens I had a 2x2" length of ally box 39 1/2 inches long, seriously what are the chances?

I used it to create a rough idea. I will buy some 2"x4" mild steel box, and shape the first 2 inches to the rear of the shock mount leaving the rear 2 inches flush against the wheel arch and seam weld along every edge.

It will result in not only a really strong reliable harness mount but will stiffen up the back end!

Another bonus is more metal and wood had to be removed, so the rear harness mount should balance out (weight wise).

And more silly tar under both panels, which had started a little surface rust around filler neck. I hate it with a passion.

So we are up to 16kg of weight lost. Oh I cant wait to weigh the engines

Gave it a bit of a degrease first and removed pipes for welding. pics will follow of pipe welding. 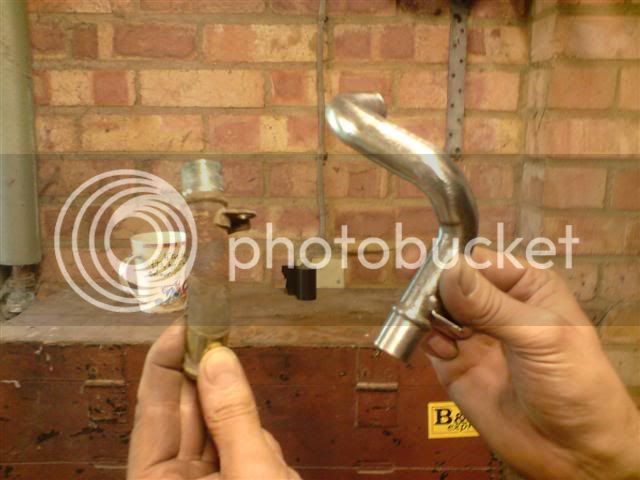 The pipe on the right was the same as on left until Damon attacked it with love, care, attention, auto-sol and an obsessive compulsive disorder

That is all for now. I will be playing again at the weekend and will keep updated!

Johnnie thanks so much for use of the garage!

Damon cheers for welding and advice!

Thanks all for comments!!

Good weight saving work!
Coming along at a good pace, can't wait to see it finished!

I thought I would shape it to the shock turrets ready for welding on Saturday.

Got the 2"x4" 39.5" long metal from a superb place called K.Rackham & Son Engineering Clicky
Most helpful.

Sorry for the quality of pics as it was getting dark

One downside to this is it is 6KG!!! But in the grand scheme of things it will be worth it.

Forgot to post piccy of the new steering wheel... thought it was appropriate

Tis all for now.

Will be posting again at weekend hopefully!!


3 user(s) are reading this topic