41 replies to this topic

That's an interesting front bumper though... off a clubman!

Whilst I have your attentions, this is a daft question but ...what can I add to stop some helpful little soul from dropping the bonnet and helping themselves?
The bonnet has no locks as such, just big fat rubber bungie things attaching it in place.
??
Ta!

Seen this car driving around Doncaster quite a few times.

Thats where we bought it from.
Some young lad had it, apparently bought from a guy in Doncaster that does them up .
Not sure who is responsible for the paintwork lol.....but we think its great.

Im not making horror stories here, but i have heard that its been spotted strandard a few times, with smoke coming out of it.


but its still a cool looking car, and loud as hell!!

Im not making horror stories here, but i have heard that its been spotted strandard a few times, with smoke coming out of it.


but its still a cool looking car, and loud as hell!!

i saw it infront of the college with white smoke, not 100% sure but think the lad bought it from blyth near mini classics, saw it about 10 month+ back up that end forsale

its a nice mini

also im 100% sure it had been de-bumpered

Interesting!
Must have had an engine change since then, as we drove it all the way back from Doncaster no issues, and my brother is a mechanic, all over it like a rash, if there were a sniffet of a problem he would have found it.
We have given it a good trial this end, and nothing but noise coming from it lol!
Previous owner said they only had it 4 months and needed the money.......
Time will tell I guess, and we are using it daily so would think something would have reared its head by now if it were going to.

this was my best mate ryans car, i helped him get the electrics working when he got it (its all still a right mess in there)

the reason it doesnt have external hinges and has a reverse light is that it is in a 1996 shell, the guy who he got it off had reshelled it and gave it the dodgey paint job
but it is registered as a 1969 mini so you can put the silver and black plates on it, although i dont think it would suit

i was wondering the other day if it was someone on here who bought it, are you local to where you got it?

i still cant beleive he sold it, wound me up a bit

thought id add a bit more, ive never known it breaking down the whole time he had it. i would be the person he rang if something went wrong with it
it still has the same engine it had when he got it, all that has been done was the timing etc sorted, which i helped with and an oil change if i remember correctly

i had big plans for the car and we went to one show, but my mate said he was going to 'get right into it' and so i helped him, only to go and sell it a few months later to buy equipment to start his old band up.

really winds me up, but keep in touch. anything else you want to ask about just drop me a personal messege on here
id be happy to help if you need advice on where to start


but yeh, its a nice little car, on a good day my 1275 had trouble keeping up

EDIT: i also have a few pictures somewhere if your interested, for a bit of history i suppose

Adam..thankyou .
Seems a few people dont like it on here, but let me tell you we are very happy with it...and do please tell Ryan.
Guess some folk just like originality and guess if thats the way you are, than nothingl else will do....thats fine too if thats your bag.

yeh i really liked the idea of it, unfortunatly there are a few small things that seem to take ages, i seem to remember seeing a bit of a hole in the rear bins one day when pulling apart the lack of interior, when he got it that stereo had some hifi speakers wedge in behind the seats, ryan bought the buckets that are in it then about a week later wanted to swap for my speedwells, (fat chance), those seats in there replaced some leather seats that i think are from a mk1 granada estate which were welded to the floor at one side and bolted through the sill, (these are now in my bedroom)

probably best to check for holes etc that need welding up before sorting a decent interior.

got a couple of pictures for you 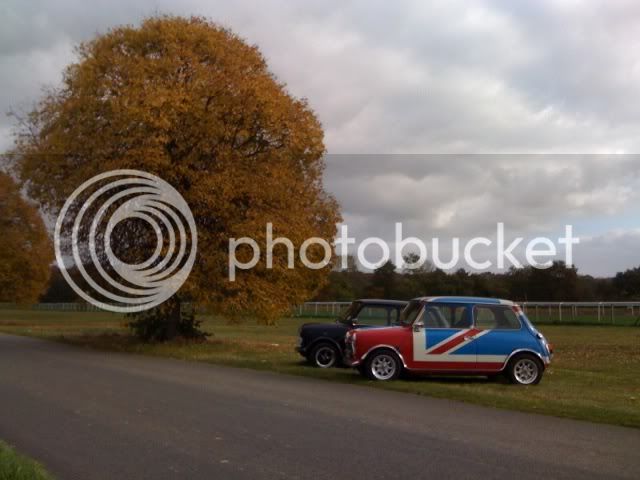 like i say, i did help him with a few bits but gave up after a bit, he wanted me to help with the brakes and tracking but i wasnt going to put hours in for something he was just gonna get rid of. (he took it to a garage tho)

EDIT dont know how that picture got so wonky lol

Thanks Adam!
The plan is to do something with the interior, carpet out etc, so all will be revealed, and sorted as it is found dont worry.
You sure you dont want to swap seats lol??

Has Ratchet, Will Make Noises

I hope you dont think that I dont like it Andy, I think the design of the paint job is something nice and different

Just thought I would mention the originality for your sake, I've been stung myself when buying a mini (not the one I have now) so I know how it can feel.

dont worry about it, the floor should still be pretty solid, but i think the guy ryan got it off worked at an aluminium place, to theres a big lump as a bracket for the exhaust fastened through the boot floor, (why its so loud) and also under the carpets there is a block for each of the subframe mounts through the floor
i remember him glueing some of the carpet bits down aswell, but i wasnt supervisiing when he did this haha
i definatly dont want to swap seats, thanks for the offer tho, ive got 5 sets of seats i think
do you have much experience with minis?
also where abouts have you taken it?

i was tempted by that one