Dave, Speaking from personal experience dont give in you have put so much effort in

DONT GIVE IN YOU WILL REGRET IT.... I DID

It is just a challenge and you have the time and skills, it may take longer than you want but keep in mind your end vision

Dave, A challenge for you... I have just looked at page one of this thread you started on 3rd August 2011

Come on you can do it

As the others said, stick with it, you're an inspiration to the rest of us!

I can't lie. I came perilously close to coating the car in petrol and torching it today. I have been having a LOT of trouble with the exhaust and it clearing the gear selector. Extending the pipe was done which was fine - it moved the bend in the front pipe past the body of the selector which was fine - exactly as planned. Unfortunately the problem is not now with the length of the pipe (said the actress to the Bishop) but the angle of the dangle. The selector itself is sitting slightly angled towards the driver's side, and this small issue is preventing the exhaust from sitting right, as well as making the selector hang a touch low. This is a remote tunnel with a rod selector, so nothing fits correctly, and my modified bracket doesn't make everything line up correctly.
I have therefore bitten the bullet and have ordered a bracket from Mini Spares. I am also going to make tentative enquiries into getting a Maniflow exhaust system made up.
I know I should choose my battles but it seems that everything on this car is fighting me right now, and the lack of assistance from car-minded friends due to covid plus my recent news about Mum has put me at an all-time low with this bleeping car. If it was a normal car, I would have been able to bolt everything back together relatively easily. Instead nearly everything is bespoke and has to be amended or remade. I do not have the ability to be able to just knock things up on the lathe (not that I have one).
Seriously considering knocking it on the head.

If I remember correctly (and it was a lifetime ago) I had the same clearance issues with the exhaust pipe and the selector (was a rod one)  ...I solved it by cutting both the selector rod and the stabiliser bar, moving them back (about 6" or 8", so it's less than a hand span from the steering wheel) and mounting it so the top of the selector box is very close to the bottom of the tunnel.  The 'top hat' bit of the selector sits above the inside of the floor tunnel.

This was on a mini marcos Mk3, but the floor pan is almost the same.

Got a gear stick boot off something from the breakers and then cut the lever down ...made a short shift sort of, with the stick in the right place .... you can glass the old hole up from inside the car with a bit of ply underneath to get the hole filled in.

Don't give up, the work you have done so far is impressive.

I have been completely blown away by all the support I've had recently. This forum and the others I am on are full of like-minded people who have problems with what they're doing too. Everyone's kind words and encouragement has rejuvenated me. If I could I would bring a couple of crates of beer and just say "help yourselves". I think that the "knocking it on the head" rant I had last weekend has done me the world of good. I've had a long think about what I have achieved and that little set-backs ALWAYS have a solution. Just for the record though, I will NOT be rushing to get this finished in time for the 10th anniversary of me getting it. I'd rather do it properly. Dom, the selector has been extended by 3 3/4" as per the Midas Manual -  the issues I have had is simply to do with the tunnel being the wrong shape for the selector - see my update below.

Which brings me on to my next update, and it IS a better one. I have re-attached the gear selector properly, and has made quite a difference. I jumped on to the Mini Spares website as they do have a bracket to attach a rod change selector to a remote change tunnel (which is much more "rounded" for those that don't know). I had initially rejected the bracket due to its cost and made my own (it was out of stock back then), but as I am working from home and not commuting at the moment, I bought one and had it DHL'd to my eager waiting palms.
First thing I noticed when getting the bracket out of the packet was that it didn't quite line up. That was a really easy fix - a gentle tap with Clyde the Club Hammer saw everything brought back in line. The second thing I realised was just how much smaller the bracket was in comparison to the one I'd made. Yes, I'd used the bigger cotton reel mounts on mine, but there was quite a significant difference. This would really help with fixing the issues with exhaust clearance. The new bracket is also angled to the rear of the car, so new holes needed drilling. But I am not that untidy - I spent some time filling in the old holes so I wouldn't get road spray when it rains.
I then lined up the bracket having attached it to the bottom of the selector, made some marks and drilled some holes. I bolted up the brackets first then slotted the bolt through the selector. I then made sure that I could easily select all gears. SUCCESS! In the words of a guy called Tony who used to work on my Mini back in the 90s: "Well I ain't takin' that f***er off again!" There is SO much more room there for an exhaust now. Very pleased.
I am now waiting to hear back from Maniflow as I also shot them an e-mail last Sunday. I expect that they're on a skeleton staff at the moment. I will chase it up in a couple of weeks.
Difference in brackets quite substantial. 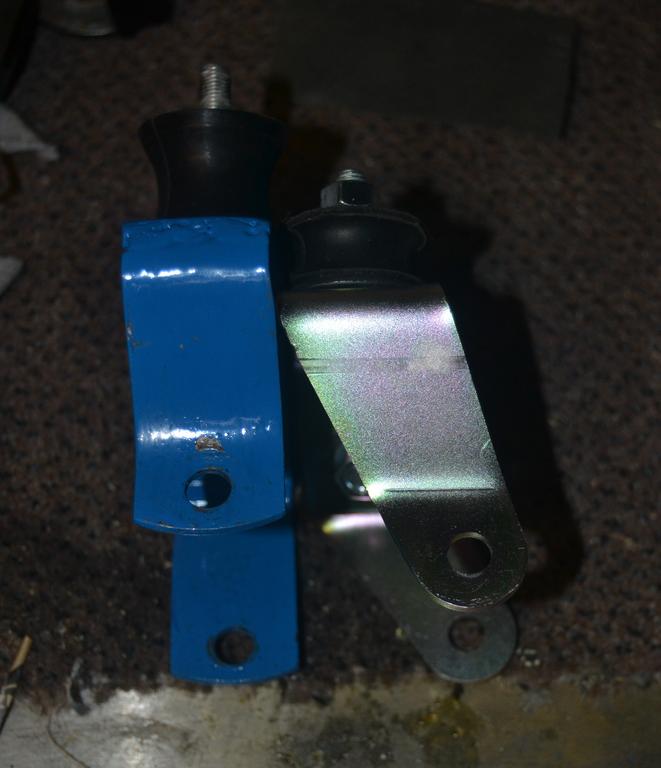 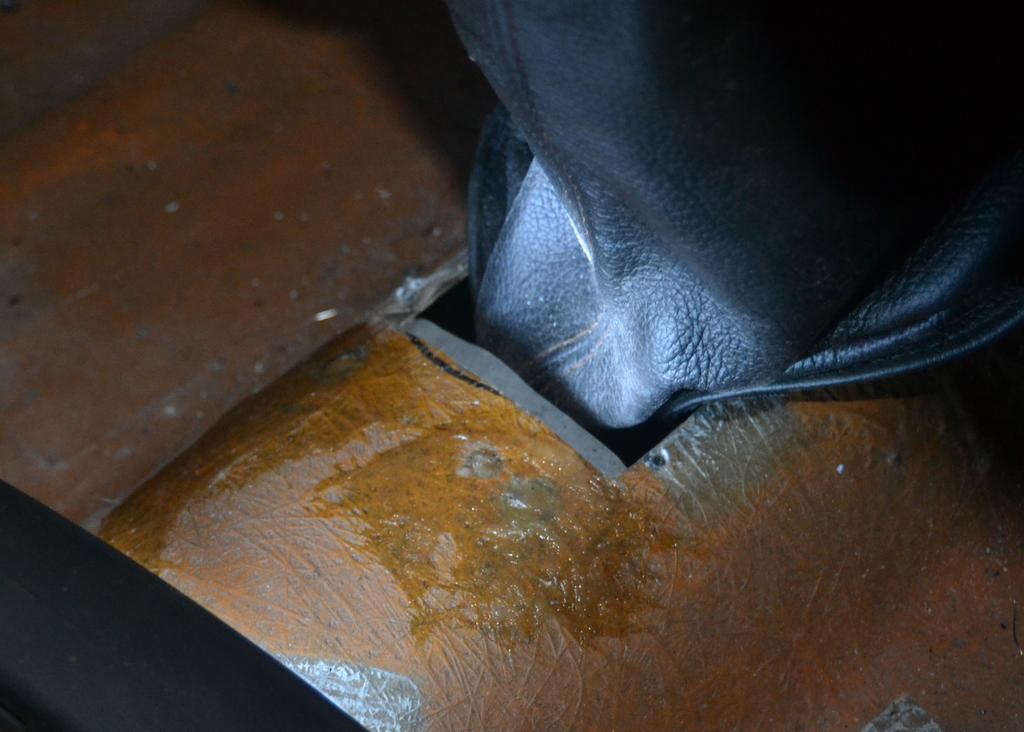 Nuts have appeared and are holding stuff in place! 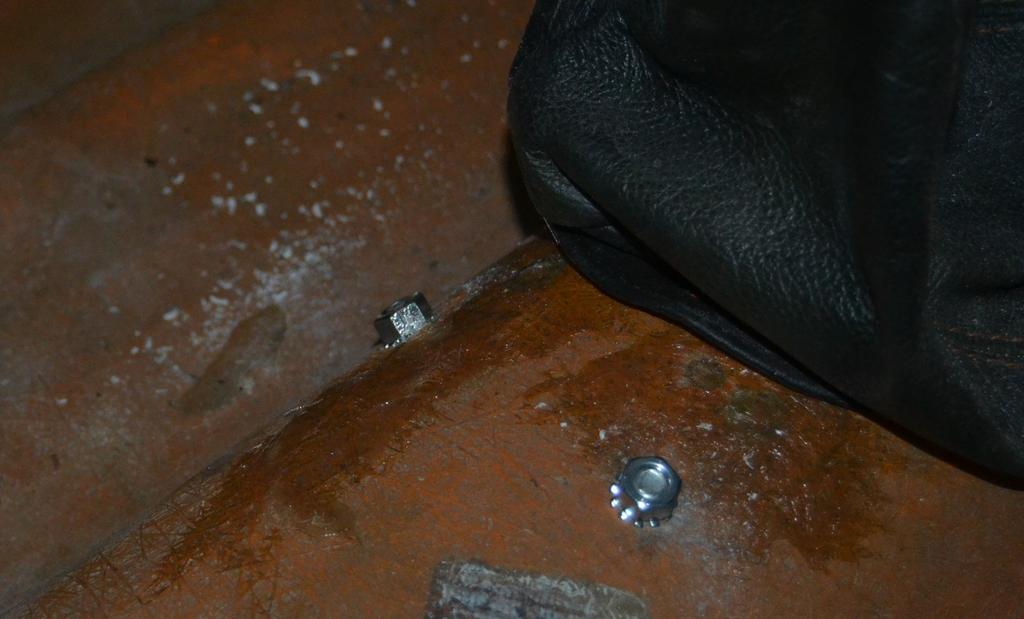 And doesn't it look neat all tucked up there! 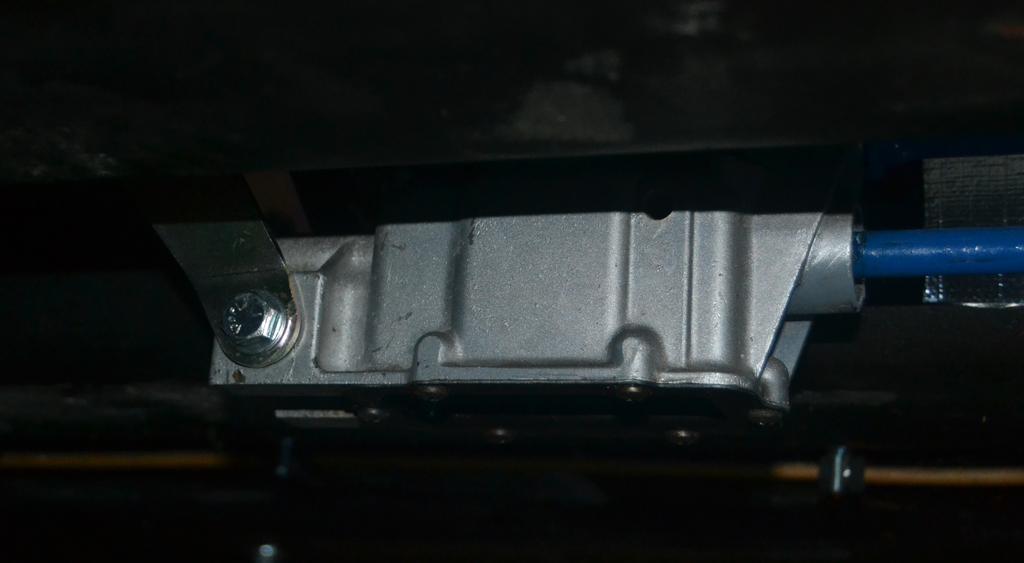 This update has no specific photographs. However, I will treat you lovely people to couple of images. I recently had a birthday. I asked for some contributions to the Zippy fund - and I have had some generous donations. Thank you family!
Therefore I picked up this: 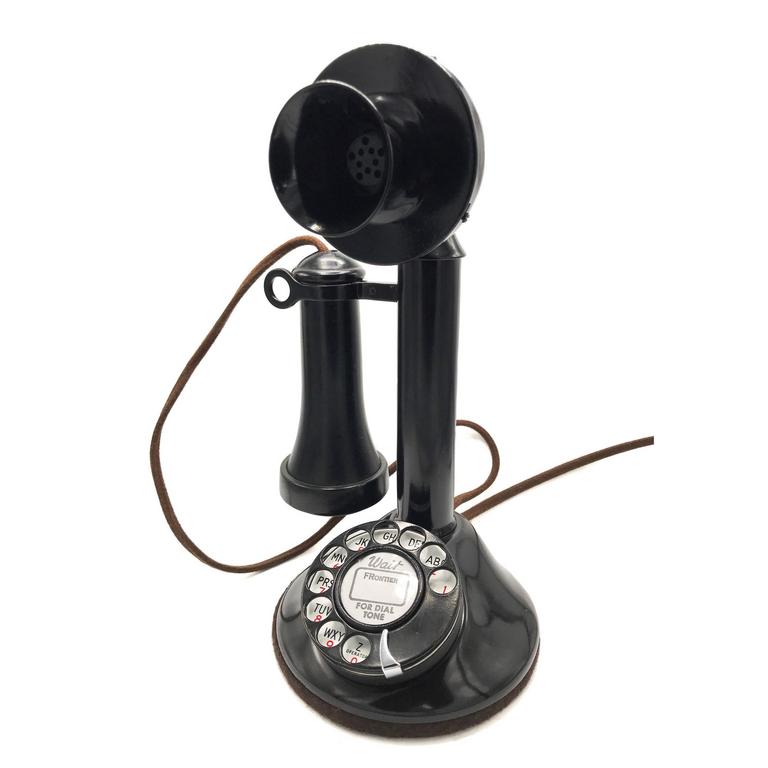 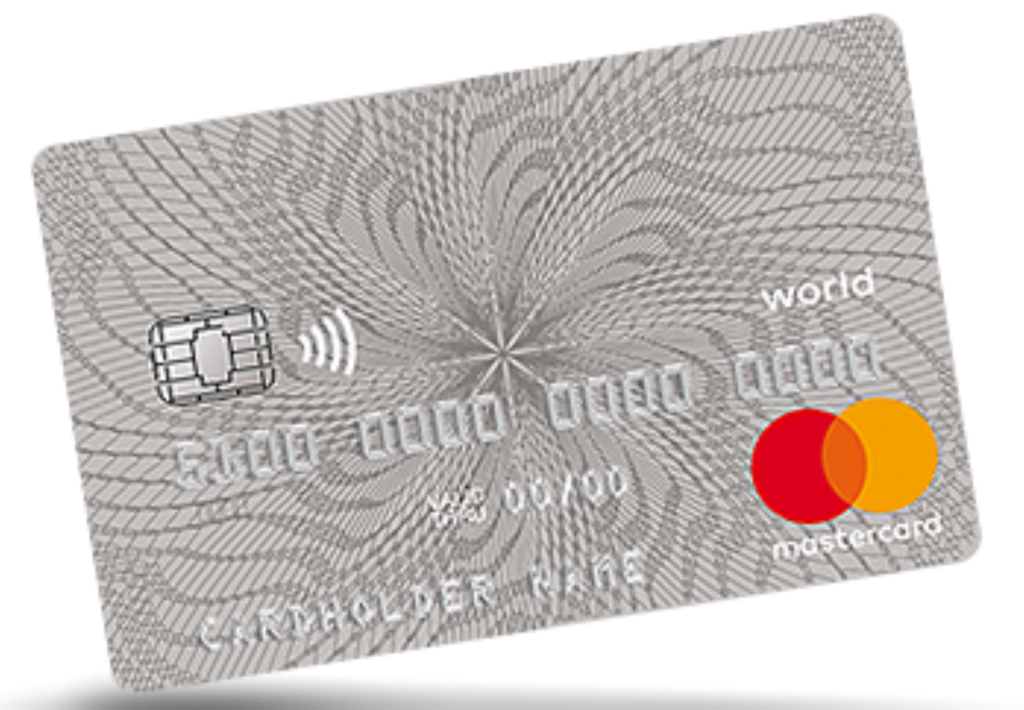 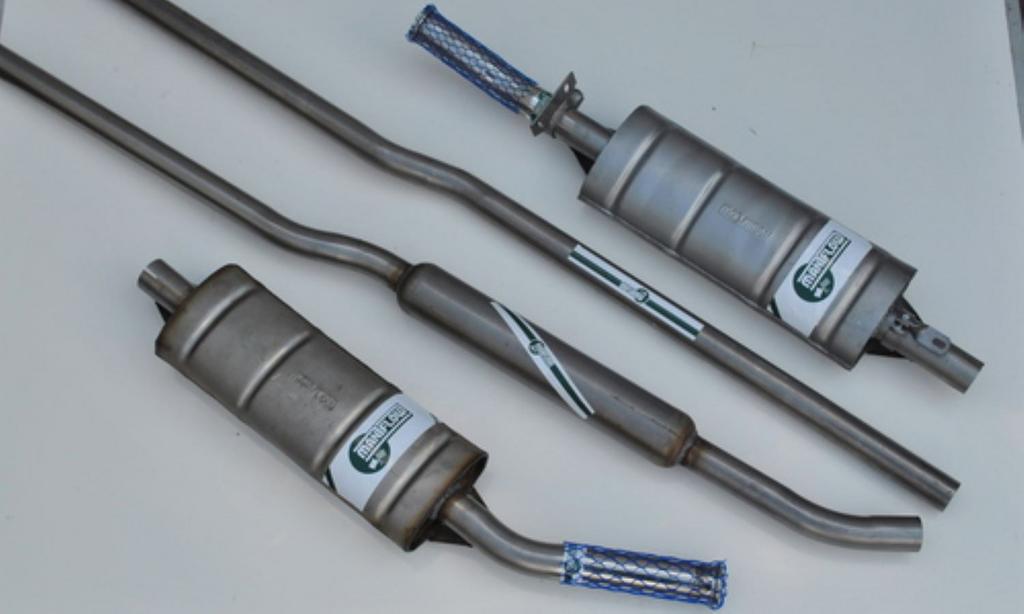 Sadly the guy I spoke to wasn't called Barry but the super helpful David was brilliant. This has put my mind at rest. Excellent.

I haven't posted much in a while as it's been a bit of a rubbish Easter. One of our cats, Moneypenny, had a spinal stroke and we've been ferrying her to and from specialist vets and now we've got her home we're having to do a lot for her. It hasn't been the best of times. She is now home, which is great, but progress is slow and it will take a long time for her to regain the use of her right legs. Daily physio and massage will help, and at least we can do that!
So I give you the world's smallest update. When I was doing my thing with Minis in the late 90s there was a guy in the club who turned up gear knobs on his lathe. I have acquired one of these (Tink had it in his garage) but the original insert for it to screw to the gear stick was missing. Instead there was a much larger hole. I asked a few knowledgeable people and the suggestion was to fill it with epoxy and either tap it or put a nut in there with the correct thread. Epoxy I can do!. So I quickly mixed it up and chucked it in. Drilling and application of the appropriate nut will follow.
I will be out of action for a couple of weeks as I need to have a minor operation next week (day surgery, nothing serious) so will be back on things when I feel more up to it.
Miss Moneypenny in happier times 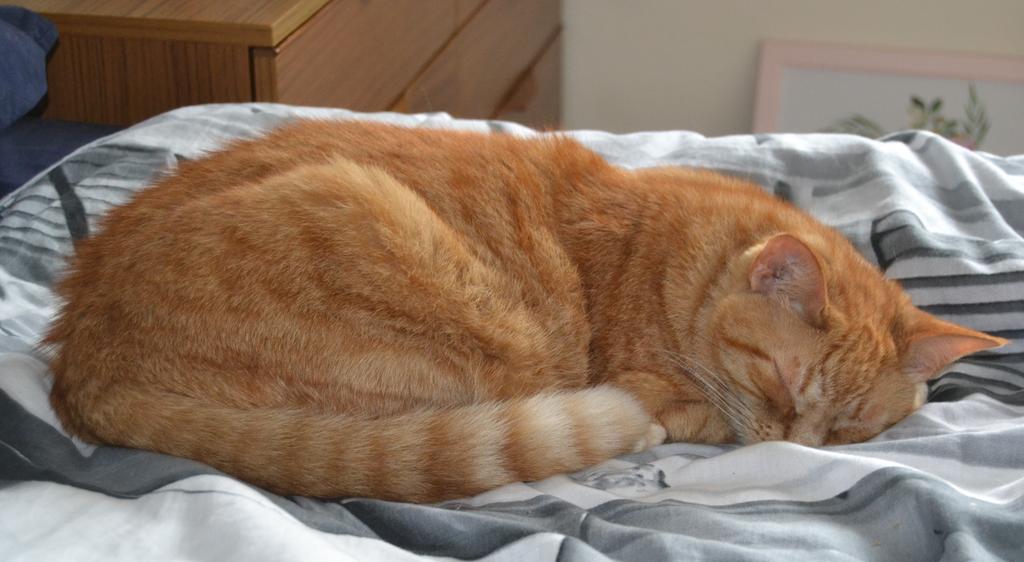 Wooden gear knob I want to use. It will be tidied up before use. 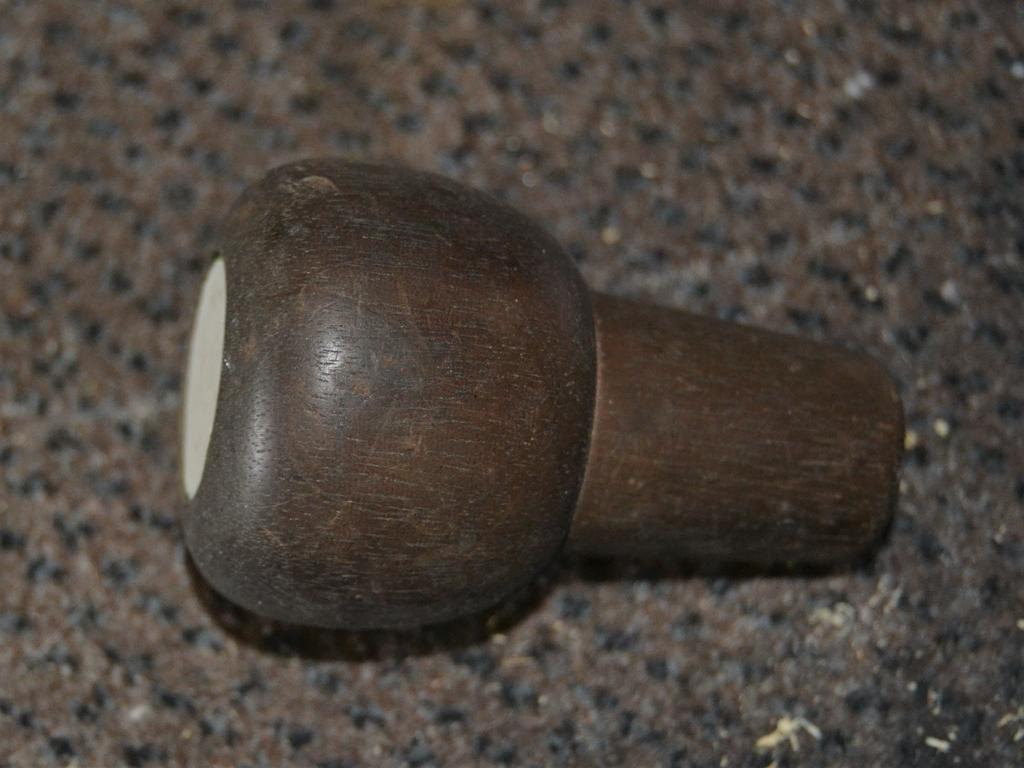 Big hole where there was once an insert. 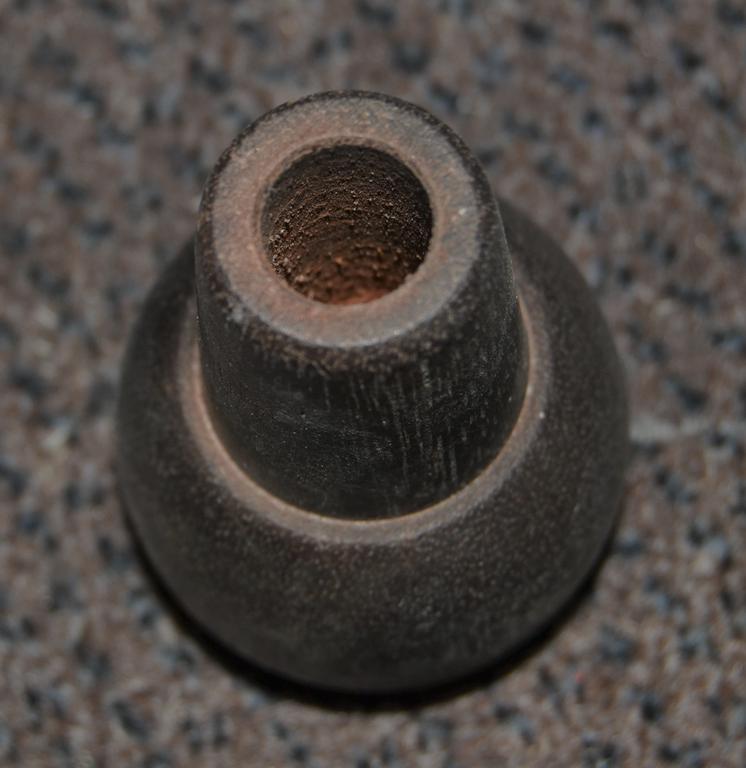 So I filled it up with epoxy. Drilling and other shenanigans will follow. 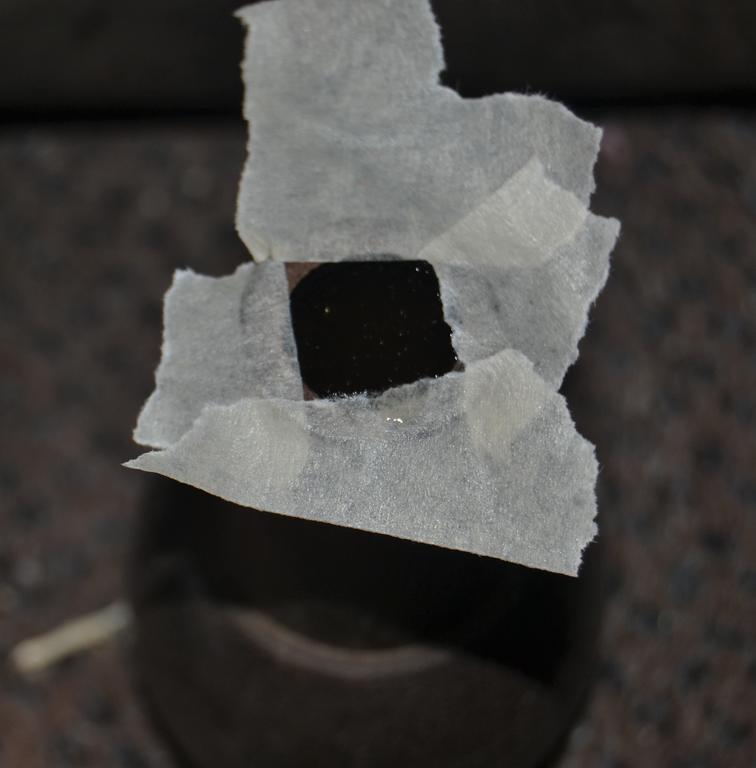 Back to Any Other Projects