236 replies to this topic

.......but before I took it off the road, earlier this week, I took the opportunity to have a play with my camera kit! (also posted in the "Show me your edits" post).  Really need to get out more with the camera this year...... 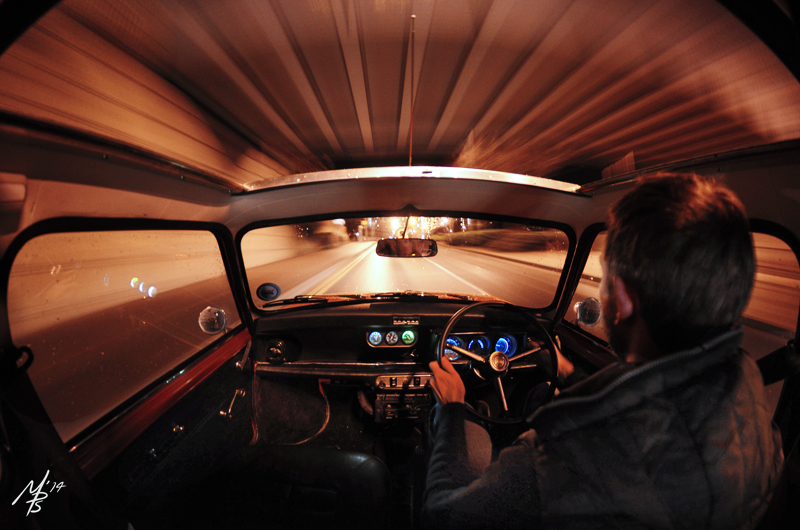 Spent most of Saturday working on the mini -

changed the accelerator cable as mine was really graunchy (can't believe what a difference this has made!!)

checked and adjusted the timing to 10°btdc @ 1500rpm vac disconnected

Took the car for a 160mile round trip run up to Suffolk on Sunday - car was running really well and I'm now returning around 40mpg, so well up on the 28ish I had before!  I'm still leaning out slightly when pulling away from junctions but part idle and boost air/fuel ratios are now looking good.

One little job I did on Sunday night was to refurbish the dial bezels.  The 3-clock GT dials have a chrome silvered face on the bezels and mine were looking a bit knocked about and tired.

I'd considered painting them but I wasn't sure I'd ever get the correct chrome finish (I've tried chrome paint before on stuff but it's crap) - and the idea of trying silver leaf came to mind. It's like wafer-thin tin-foil which you stick to a surface that you want to "chrome".  People use it to chrome picture frames and you can get gold leaf too for the same effect.

Anyway, discussing it down the pub my mate rob mentioned that he had some that he bought for a job and never used it - he dropped it over on Sunday and I had a play with it on Sunday evening.

It's perfect! - it works out just like the factory finish and is a nice finishing touch for the interior.

Silver leaf (it says gold but it's not!)

I was thinking of doing the insides of my Cooper bezels in silver leaf too, to try and make them look a bit bling.  What kind of glue did you use ??

I was thinking of doing the insides of my Cooper bezels in silver leaf too, to try and make them look a bit bling.  What kind of glue did you use ??

Not sure what it's called - I got given the leaf and glue from a friend so I just used it (I think it came as a kit) - it's waterbased and I think acrylic - after cleaning the surface you apply and leave to go off for 15mins then gently lower the leaf into place and it magically sticks smooth with a bit of gentle rubbing - weird stuff.....

Final update image for this session of rebuilding - interior shot.

I've been gradually tidying up and sorting out some of the more niggly aspects of my interior:

mounted heater with bespoke bracket (it sits further forward because of the turbo box) - better than it being held in with tie wraps as before!

Just need to sort out split seats & the odd bit of frayed carpet.....top dash rail is a bit iffy too - I did a slightly dodgy job of recovering it so it's a bit lumpy in places.....

Up on axle stands again.

Fiesta brakes - rebuilt 6 years ago and never used. A few hundred miles of use and the seals start leaking again! Turns out brake fluid is really corrosive,,,,,,,shocker. ;)

Alternator isn't charging any more so I swapped it out for a spare which has the rumbliest bearings known to man.  Rebuild kit is on its way, hopefully arriving today!

So car currently sat on axle stands....one rear wheel over at the service garage and one calliper in bits awaiting seals.

One nice job I thought I may as well do whilst it's waiting was to respray the slam panel, bonnet striker and bonnet release lever.  It'd been chipped/bashed/scratched/damaged during the resto and was letting the appearance of the engine bay down a bit.

And use this kit to replace the worn/broken bits

This where it stands so far. Fully disassembled, new bearings pressed in.....unfortunately the slip rings are badly scored (and not included in the kit) so I'm waiting for one to come through the post so I can complete the rebuild.

350 miles completed over the weekend - nearly a complete lap of the M25 done (including a convoy with an s-reg cooper for a bit) to collect a mini carpet set from a fellow TMF'er and a trip up to Norfolk to see family.

Popped in on a friend on the Saturday as he had mentioned that he was working on his nephew's new car - thought I'd pop in to say hi    ;)

I didn't realise your GT was turbo powered Sherly !!

Where did you get your alto rebuild kit from ??  I rebuilt an old 17ACR years ago with a kit of bits I bought from a bloke in Tamworth (just of the A5) easy enough.  I've got a couple of spare "whatever they are" modern units so I'd like to give them a go too.

I didn't realise your GT was turbo powered Sherly !!

Where did you get your alto rebuild kit from ??  I rebuilt an old 17ACR years ago with a kit of bits I bought from a bloke in Tamworth (just of the A5) easy enough.  I've got a couple of spare "whatever they are" modern units so I'd like to give them a go too.

Rebuild kit was from eBay - just searched for "a127" & "rebuild" and picked the best looking one.  Weirdly the one I bought had everything in it needed to rebuild the alternator apart from the slip rings.  Sod's law meant that the slip rings we're mullered when I opened it up so I had to order that part separately.

Quite satisfying to rebuild one and get it working again.....

Not much to report progress wise.  Speedo stopped working so I guess that's a step in the wrong direction.

Bought a few bits and pieces from MiniSpares last week and while I was dropping things in the basket I had a browse through the stickers section and might've added a couple of BMC rosette transfers into the mix for my rear quarters.  BMC disbanded in '66 to briefly become BLMC and then BL and my car was built in '70 so it probably wouldn't have ever worn these stickers......but the car is far from pure, I'm far from being a purist and I really like them.  That's all that matters right??

Loving the BMC rosette! Can't beat some retro stickers, it's a slippery slope though, mine started as one sticker, and has escalated quickly!

Looking beautiful parked up as well!

Loving the BMC rosette! Can't beat some retro stickers, it's a slippery slope though, mine started as one sticker, and has escalated quickly!

Looking beautiful parked up as well!

I know what you mean......I've now got an eye on the "Safety Fast" rosettes that are a bit more period correct.  My eBay watch list is still a long list of BL related stickers............and I still haven't bought them yet.  I'm a bit worried that the first one I buy will open the flood gates for the rest!

I've got the safety first rosette as well as the abingdon ST shields to go on my 72 car.  I think I mentioned it before but this website is not good for getting carried away....

I bought all my window stickers from here, and I've just started on their body stickers.