It would probably be just a header flange, not any time soon though. Reasons for picking the d over a b:
-weight
-cost

I live in Moorpark, by the way. One of you should come give me a ride, I've never driven much less ridden in a mini.

well just let me know whenever

I was only asking because i also think the d16/d15 is a much better choice for a ton of reasons.

when a few things are fixed on my car, my brakes suck so bad ordering some kad brakes. and i have a remote shift trans and i cant drive the car on the freeway it revs sooo high so i need to buy a rod shift trans.oh and i need to rebuild the carb this weekened lol

the life of a mini hahaha

but when thats all done im going to take a road trip up to paso to go drink some wine so i will hit you up, by the way car is looking good and i have seen so many projects never get finished i hope this dose not happen here.

Just read though, you've wasted an hour of my life! Just kidding, I'd give it again. Really high quality build mate, so many nice touches, almost a shame to take it out and get those fuel pipes dirty!

Haha thanks buddy, they invented Simple Green for a reason!

I'm in the middle of doing a wire tuck, I'll post some pictures when I'm done.

After reading that and seeing how good yours looks, im tempted to do a d series now.

Not sure i should say it but, keep up the good work Chris

Always really impressive, admiration for someone who has attention to detail.

Probably been asked before, but aren't you doing it the wrong way round?

when will the prep & paint stage happen?

Although I suppose this way you know exactly what will go where and aren't causing any damage to the what could be painted shell. 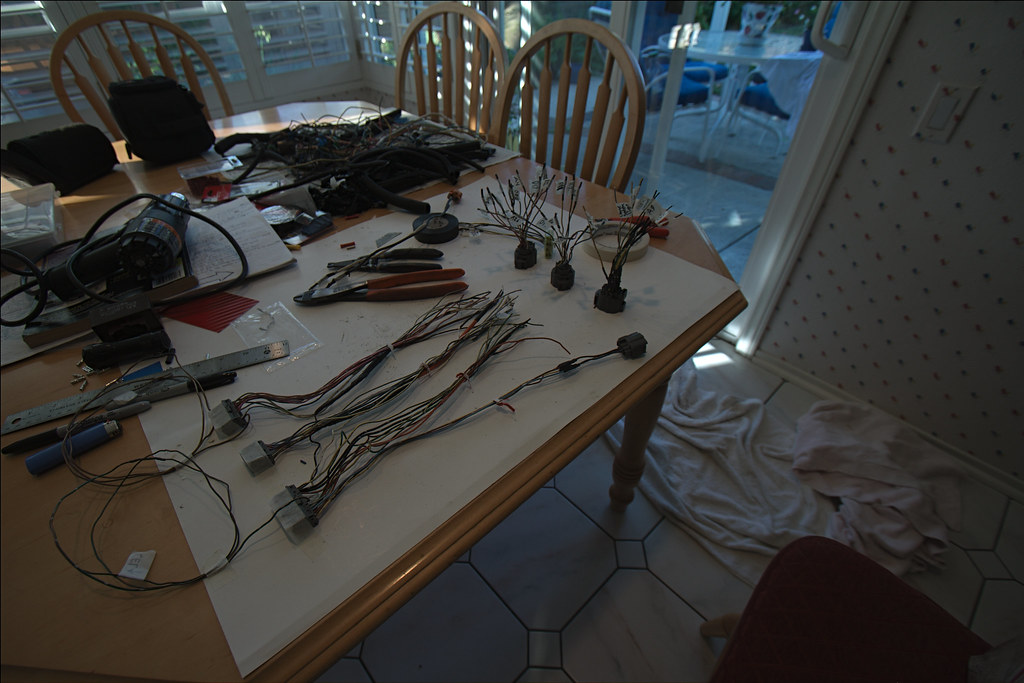 Chris, can you please detail your harness build!? I am doing mine shortly, and would love to have something to follow. So far I have the engine harness and the ecu harness (in transit to me) for the interior. Not sure if I need an underdash harness or not, or the ecu harness would suffice to plug into the main relay.

krazy, if you're not using the Honda fusebox then you shouldn't need the dash harness as well. I've got everything all wrapped back up now, but I did take detailed notes. BUY A HONDA ELECTRICAL TROUBLESHOOTING MANUAL! It's easy as cake with one of those.

Here's the gist of what I did:


-D16Z6 harness
-Re-routed all the wires so that it fits through the holes I made in the firewall
-Removed unnecessary circuits (basically everything that the ECU doesn't see, ex. backup lights, oil pressure idiot light, a few other little things)

Other than that it's pretty much untouched.


-Traced every circuit from ECU pinout to plug, labeled each wire with the correct ECU pinout number, and gave them a snip.
-Shortened the entire thing to around a foot and a half long
-Went from pinout to connector for each individual circuit, as noted in the electrical manual
-Wired up the main relay, here's a little diagram of how mine is. Some of them have socket 4 blanked instead of socket 6, but if you can reference the electrical manual it doesn't really make a difference.


I wired mine up like this, the letter/numbers represent the ECU connector pinout number:

After everything is connected, the only wires that I had to connect to the rest of the car were:
-Start signal
-Fuel pump +12 (from main relay, I'm grounding this though as I'm using a separate relay for the fuel pump)
-Switched power +12 (connect to fused key-hot battery source)
-Constant power +12 (connect to fused always hot battery source)
-Charge system warning light
-CEL light
-Service check connector

With all this being said, I tested each circuit with a multimeter, but the car hasn't run yet so I can't be certain that everything works. I wouldn't follow this guide until I get this thing running, and diagnose any issues that may arise.

It's really not that hard when you have the electrical troubleshooting manual. I would have been lost without it.

Thanks for the tips Chris! I will look into that manual!

Wow, thought I'd give your diary a peek since you gave me some advice regarding the front end of my mini. I can't believe that after 17 pages of so much being done that you are still in the garage! No stone left unturned is an understatement. You seem to be looking for things to improve just for fun. Wish I had your experience, garage, climate and money. I'm so impressed.

Cannot wait to see the finished product. Got a rough date you'd like it done by or are you not thinking about the timing?

(Edit: wish you could do some 'tall-guy' improvements in my mini, even at 6'3" I find it impossible to go longer than a 1/2 hour without stretching my legs, 6'5" would be interesting!)

i'm in LOVE with your mini

you do make it a really good and fast mini

so thats why i cant find any good minis in nz anymore . they are all getting snapped up