Mini Rat Rod!
C**p I guess I'll have to build another one..... when I get done with this one of course.

Can't ever have to many head turning Minis I say!

Mini Rat Rod!
C**p I guess I'll have to build another one..... when I get done with this one of course.

Hey guys, can't say for sure, but I may be "the guy from seattle" mentioned earlier in this thread. Regardless, I am A guy from Seattle, with A mini and A Z Cars R1 kit. I know I emailed with Willie when I was preparing to buy my kit, and I seem to recall Chris putting someone from California in touch with me, which may have been you Photoguy.
Unfortunately, my project stalled out a little over a year ago when I moved houses. Looks like this forum started up right around that time, so I just found it for the first time yesterday.
I'm stoked to hear about so many other peoples projects, and stoked to hear that Z Cars is still going strong! Hopefully this y'all can help me get past some of the stumbling blocks I've hit, and provide the inspiration to get this thing on the road.
I'm going to try to get some pictures of my build up; for now we might as well skip to the good stuff: The Maiden Voyage!

Forgive the short sloppy shifts. The left hand shifting/bike clutch combo took a little while to get used to...

Chops it has to be you. How many R1 minis are there in Seattle?????

So awesome I hope you get your R1 finished. We can have 3 person Zcars N. America meet! Nice looking mini you got there.

Chops it has to be you. How many R1 minis are there in Seattle?????

So awesome I hope you get your R1 finished. We can have 3 person Zcars N. America meet! Nice looking mini you got there.

Thanks. I'm really hoping to get it back on the road by springtime.

I spent about about 1.5 years working like mad to get it where it is (I brought the car down from Canada and it was a rusty mess)
My goal had been to have it on the road when I moved in 9/06 so I could drive it to my new place. That's when I took the video.

Shortly thereafter, I was in the process of trying to get the alignment sorted out, and install the necessary parts to appear street legal. After giving it my best "eyeball" alignment job (which was totally unsuccessful) I took it out for another test drive, this time with headlights, and the hood installed. I went for a drive around the neighborhood and kept it mellow long enough to figure out that the alignment was still hosed. On my way back I decided to lean into it and get a bit higher into the revs. Right about the time I was approaching 10k, I heard an odd noise, and the next thing I know all I can see is the top side of the hood (on which I'd spent neumerous hours blocking out primer) which had come unlatched and flipped up vertical. (both the normal latch and safety catch were installed in case anyone is wondering) No major damage done, but needless to say, that was enough to make me throw in the towel and trailer it to my new place.

Once at my new place, I took it around the block and then parked it in the garage. I didn't touch the car for about 3-4 weeks while I was busy moving. Next time I came out and tried to start it, it was running like total garbage, acting like it was only hitting on 3 cylinders.

That's basically where I left it, and haven't even gone as far as to pull the plugs. I'm hoping it's something minor, but kind of don't want to find out if it's not...

Anyhow, it's been a great project. I'll try to get more pics posted soon.

We should probably schedule the NA Z Cars Meet midpoint between here and Ventura. I'd love to do that drive down the coast in this thing!

Lets do it Chops get that thing done!

Got word from freight that it will be here this week. I will post up picts of the package when I get it.

Hey Guys
Let me know when the three Zcar meet is Or maybe I could just check out one of your cars. I have a 81 austin cooper and am wanting to do a mid engine conversion. 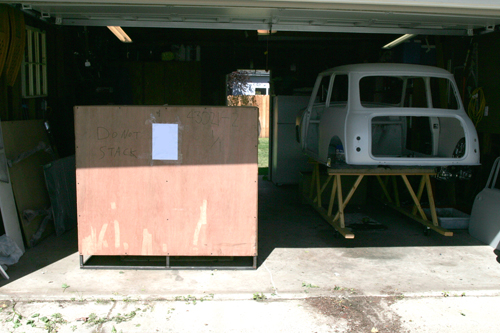 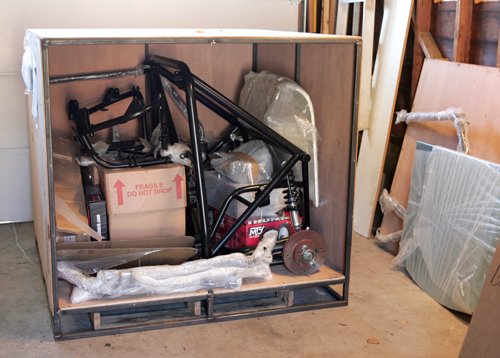 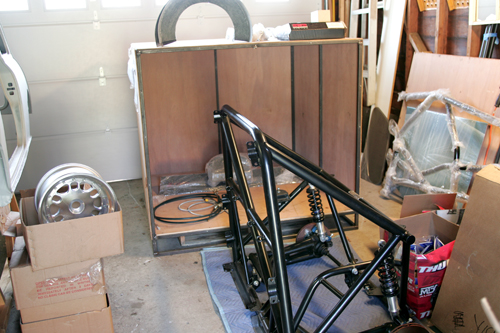 There is so much to do!:razz:

If that urned up at my door I'd leak, everywhere

We know what you will be doing for the next few weeks. Keep us updated. Dont forget to stop and eat. LOL