How to Guide: Changing Brake Discs and Pads

The following is a guide for fitting new brake discs and pads:

WARNING: Brakes are a safety critical part of your vehicle and shold be installed by a competent mechanic following vehicle manufactures installation procedures.

I had recently had a problem with my brakes (see: http://www.theminifo...?showtopic=9163) so I decided to replace the discs and fit new pads. 998Dave was my technical advisor and also helped with the camera work! :grin: Cheers Dave :smartass:

Picture: One of the new discs and (EBC black stuff pads) purchased from Mini Spares. 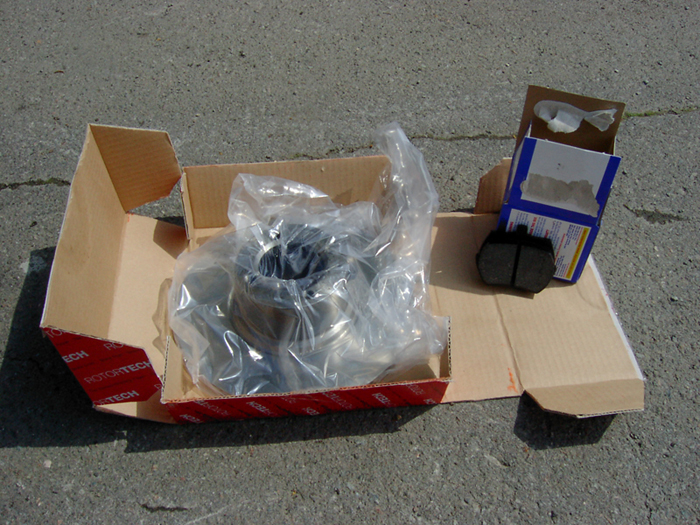 Step 1: The first thing to do was to loosen the wheel nuts before jacking up the car.

Step 2: Jack up the car and put in the axle stand. Make sure that you place the jack so that you can fit the axle stand on the subframe as well. Also ensure that the car can not roll off the axle stand, this is best achieved by placing the stand towards the rear of the front subframe as shown, also chock the rear wheels.
(WARNING: When doing work under the car ALWAYS use axle stands!): 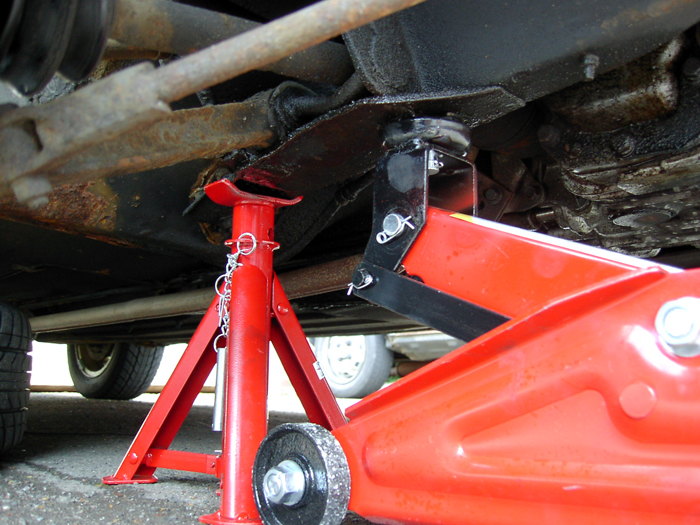 Step 3: Close up of the axle stand position:
(In the background is 998Dave's mini, incidently he was changing his discs to. 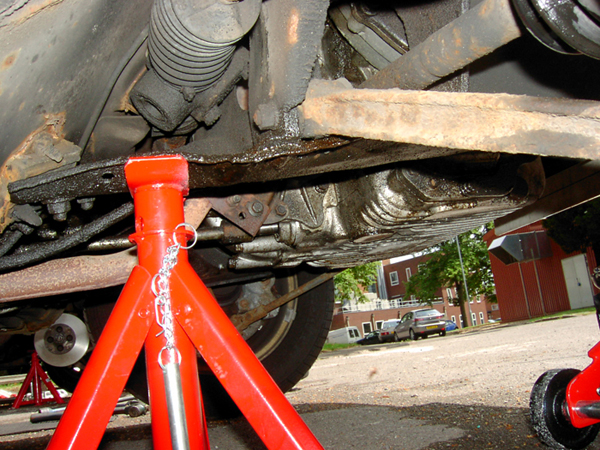 Step 4: The wheel is then removed and the nuts were sprayed with the miracle spray - WD40.

Step 5: Here is a close up of the disc, as you can see its condition is pretty poor.

Step 6: To take the brake caliper off a nice long bar was used with a 9/16th inch socket. 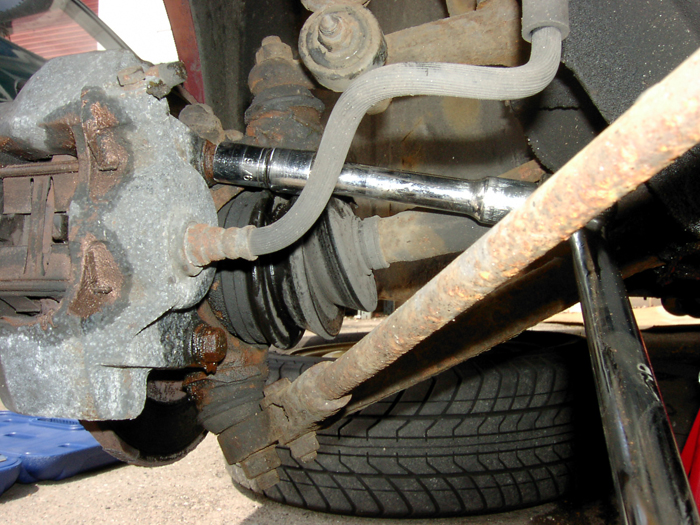 Step 8: The caliper can then be taken off the disc (and rested on a handy spare wheel as to not stretch the break pipe).

Step 9: The next few pics are for replacing the brake pads.
To remove the pads 2 split pins on the caliper. This is done by bending the pins straight with pliers and then pulling them out. 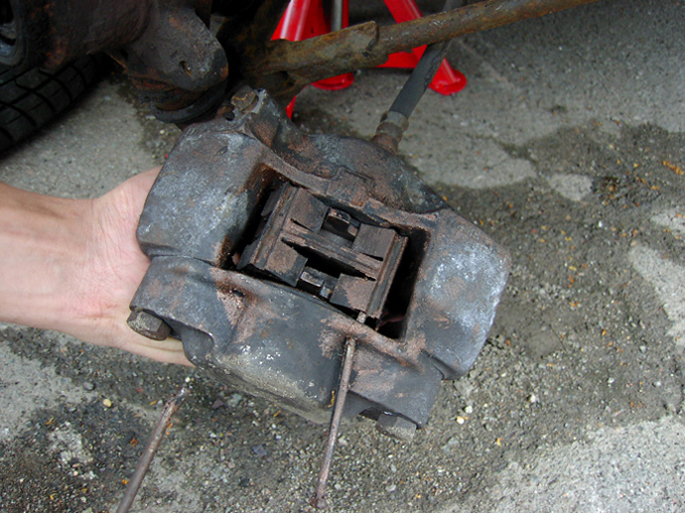 Step 10: This then allows the retaining plate to be removed... 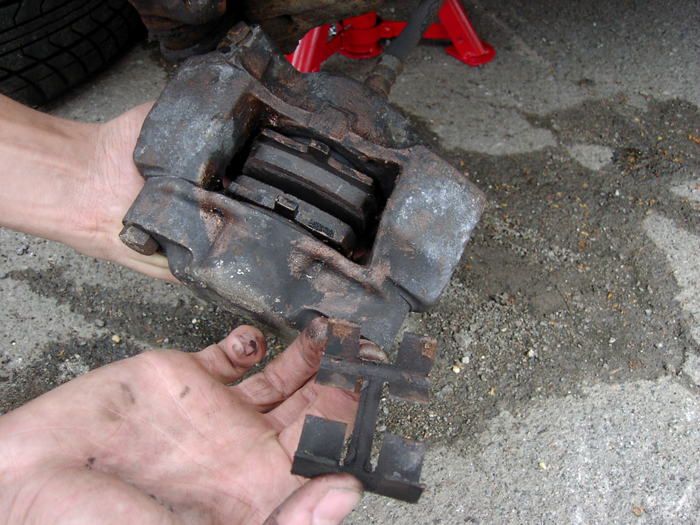 Step 11: Then the pads themselves

If you are changing disks, it is best to change the brake pads too. As shown in the photo, the old pads will have bedded to the shape of the old discs, and even though relatively new, the green hatched areas were providing no braking effort at all, this is evident in steps 22/23 later when looking at the disks themselves, and if used, would transfer that same wear pattern to the new disks.

The pistons must then be pushed back into the calipers, to do this the brake fluid reservoir must be opened and cloth placed around it incase the fluid overflows.

Step 12: The new pads were then slotted into the caliper, the retaining plate replaced and the split pins inserted and bent to secure them. [If changing the pads is all you desire, go to step 29). 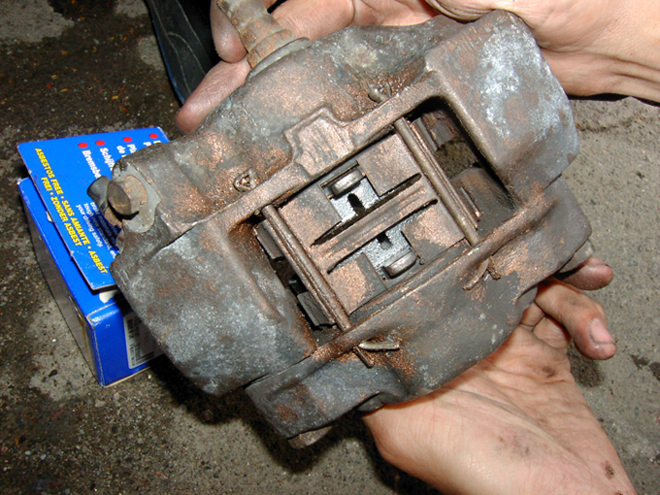 Step 13: The castle nut split pin was straightened then removed.

Step 14: To remove the wheel hub castle nut, the hub was braced with a wheel brace. However the nut would not budge so......

Step 15: One of daves wheels was put on, the car lowered back down. This then allowed much more force to be applied to the nut (The car was put in gear to prevent movement of the wheel - as the caliper was off the disc).

The nut was just loosened as the 4 hub nuts needed to be loosened first. The car was then jacked up as before. 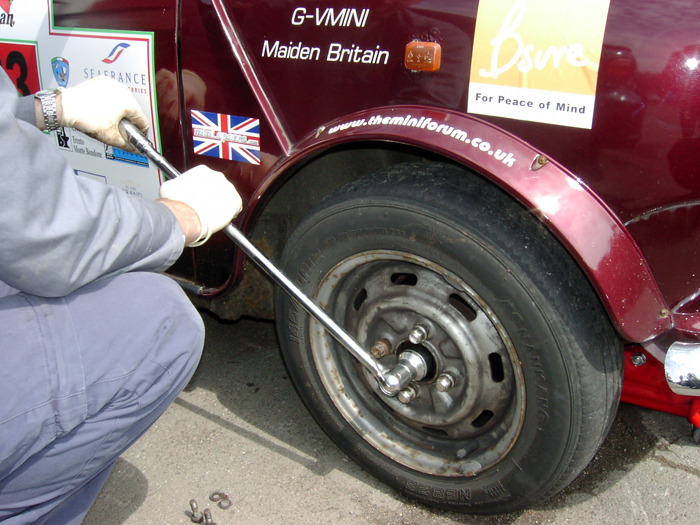 Step 16: To remove the hub nuts the disc was braced again using the spider.

Step 18: and the shim type thing behind it was removed as well.

Step 19: The disc can then can then be completely removed.

Step 20: To seperate the hub from the disc, a little persuasion was required - careful persuasion goes a long way... 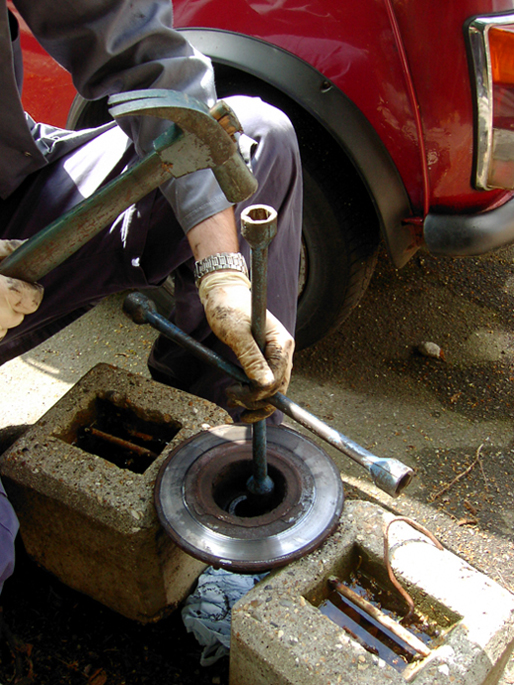 Step 21: The seperated hub and disc. 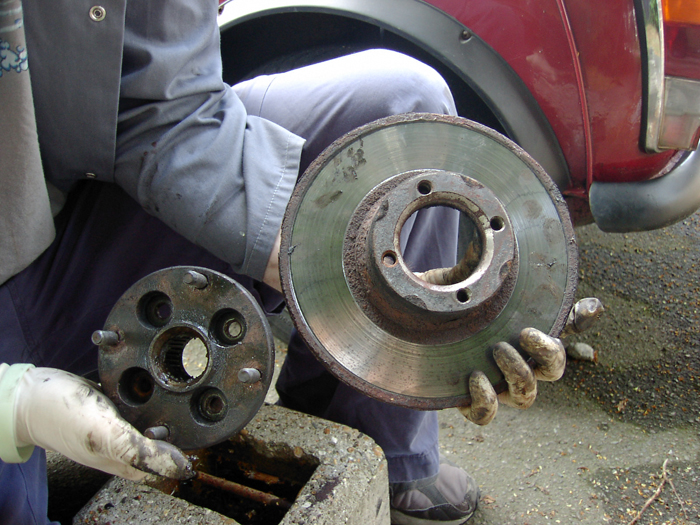 Step 22: This is a comparison of the new and old disc - outer side of the disc. 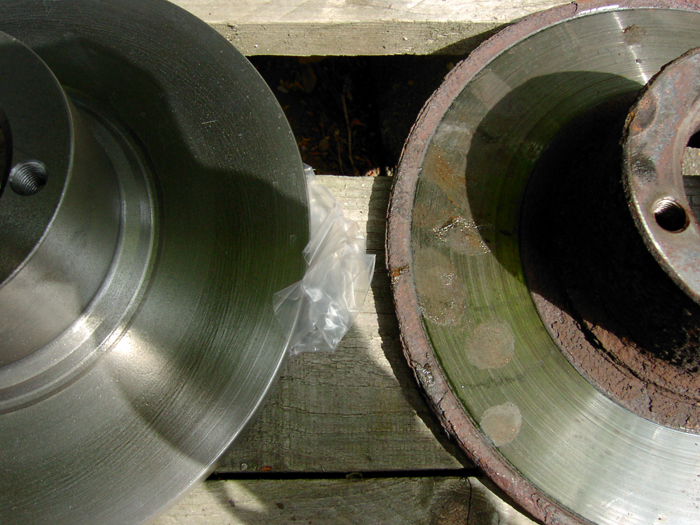 Step 23: This is a comparison of the new and old disc - inner side of the disc. You can really see the poor condition of the old disc, I believe this was the cause of the uneaven break pad wear, and resulting in the poor performance.

Step 24: The hub flange was then fitted to the new disc, taking care to align the holes in the hub and disc. The 4 flange retaining nuts were then screwed into place.
[WARNING: Great care must be taken so that no oil/grease gets on the new disc as that could contaminate the new brake system] 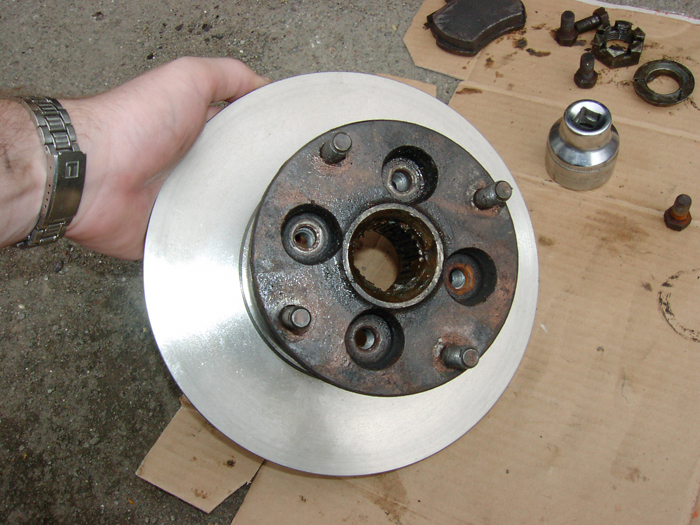 Step 25: The disc and flange assembly was then put back on the car.

Step 26: The wheel hub castle nut was then to be replaced and so the correct torque was consulted in the Haynes manual:

The Specification section of the Supplement section:

This information can also be found on GuessWork's amazing CD of knowlage:

Step 27: The wheel hub castle nut was then fitted, the disc braced and the nut was torqued to the correct value (with a torque wrench - how fancy [oh and safe!!!]). The split pin was also replaced and bent to secure it.

Step 28: The disc was the braced again (a different method is shown, this is a good method if you have assistance). The torque value for the hub nuts is in the Haynes manual, and can be different between models so look it up!!! 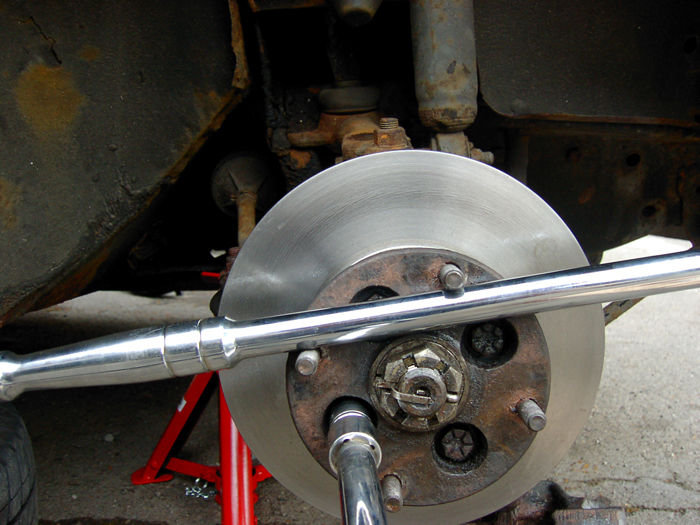 Step 29: The caliper can then be slid onto the disc. 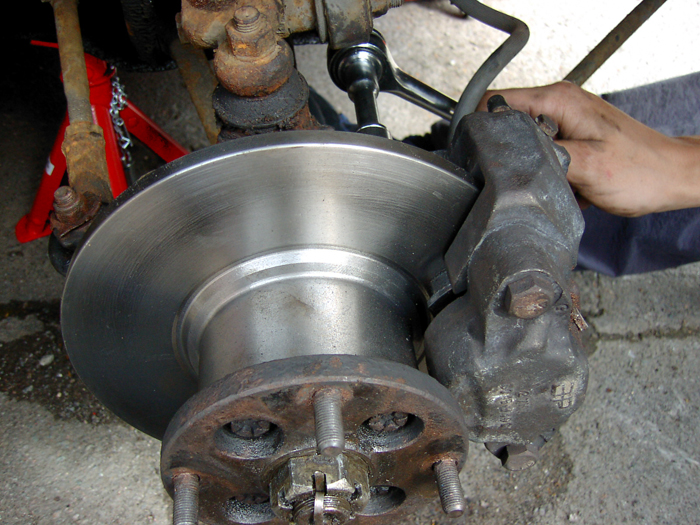 Step 30: The two caliper retaining nuts were then replaced, this can be awkward but use of a small screwdriver to align the holes can reduce the effort required.

Step 31: The wheel was then replaced, the car lowered and the wheel nuts tightened and the job is finished.

A picture of the handsome Guide writer, who is going to buy 998dave a quick pint to say thankyou for all his help and guidance, and the use of his tools! (Oh is he)

NOTE: When NEW brake pads have been fitted they must be allowed to "Bed in". This means for the first 300 miles you should drive with caution and not brake excessivly. During "bed in" the brakes may be less effective until the components 'seat' correctly. Dive with caution until full break efficiency is observed.

Back to Brakes, Suspension and Subframes