90 replies to this topic

We got the roof racks on the Woody shell & upside down.  Selected a front subframe, added some stitch welds, added steel gussets for tie-rod ears, bolted subbie into upside down shell and welded rod change tunnel bit into MK I shell.

Photobucket is your friend.  Start an account, upload your pics, click on the IMG code, paste that link in your thread.

Will be loaded up as we go forward.

Here's some of the photos. Hopefully they work 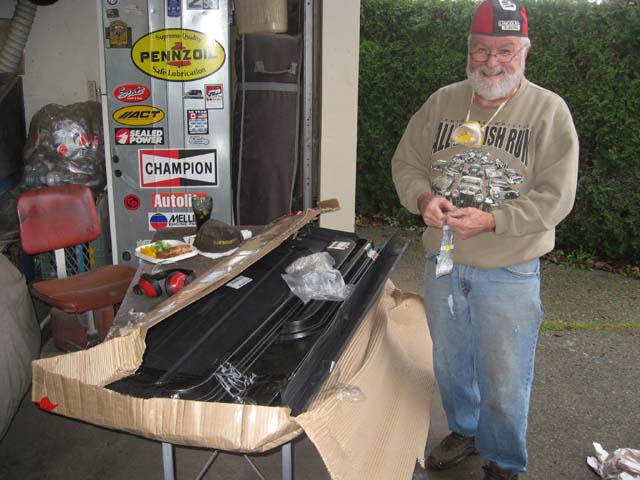 Last photo was this afternoon...a little clowning around when some steel for Lucky and small bits for a 1293cc build arrived.  Left hand floor in, butt welded from toe to heel board.  Right hand floor out, to be followed by new floor install, new heel board install and new full length doorstep panels.

Both full length half floors are now in...some grinding to do today...and, might have the new heel board in today.

http://www.miniman.ca (John G is posting some of his & my photos on a regular basis)

New full length floor panels and heel board in...1 outer sill/rocker to go.

Keep up the great work, another Woodie saved

First, the Mini is built from the good front end of one and the good back end of another...welded through the A pillars, doorsteps/sills and across the front floor.  I do not know when that happened...before it was shipped new in July 1961 with external tank to a Dealer in New York...or...following an event by someone, likely in New York.

Second, the last owner to licence and drive the Woody was a Sgt. Thomas in the US Army.  He bought it from Charles Pervo (who is still into Minis in Ohio), who had bought the Mini in western New York more than 35 years ago.  When Sgt. Thomas was transferred the Mini was not running and stored behind a shed, where it was picked up by Mike Kearney of Seven Enterprises as a parts car.  Mike took the Woody to California, sold the bits on to the late Kent Simmers who sold the rolling chassis on to Chris Higgins of Vancouver, British Columbia.

Third, Chris flat towed the Mini from California to Canada on the Interstate 5 (I5) and a wheel fell off shortly after crossing the border and pulling into the Customs office to import the Mini.

I treat Lucky with a little respect because it might never have fallen to me to put the Woody back on the road.

PHOTOS:  The welds joining 2 Mini shells.  The Mini when owned by Chas. Pervo

Great to have so much of the history of Lucky,looking forward to more up dates.

When we are in the garage you can look at low res streaming video to see what we are doing.  The camera also regularly refreshes still images too.

Should be back in the garage about 20:00 GMT Saturday.

Nice project looking forward to seeing this one come together :)

Ready to weld the new crossmember on Tuesday.

As Christmas nears and School term ends work is slowing down a little...however great progress from Day 1 on December 1st.

Close to offering up the doors before letting in the full length doorsteps...maybe by New Years Eve.

Crossmember welded in...and front doors in shop to be offered up for fit prior to new full length door step panels.

Also pulled out "harvested" left rear quarter panel so we can replace the 'knocked about steel' in the vicinity of the rear lamps.