Life Pro Tip: If your true calling is to be a sculptor, quit your job in the automotive refinishing trade. Body filler is not a sculpting medium nor should it be applied with a trowel. 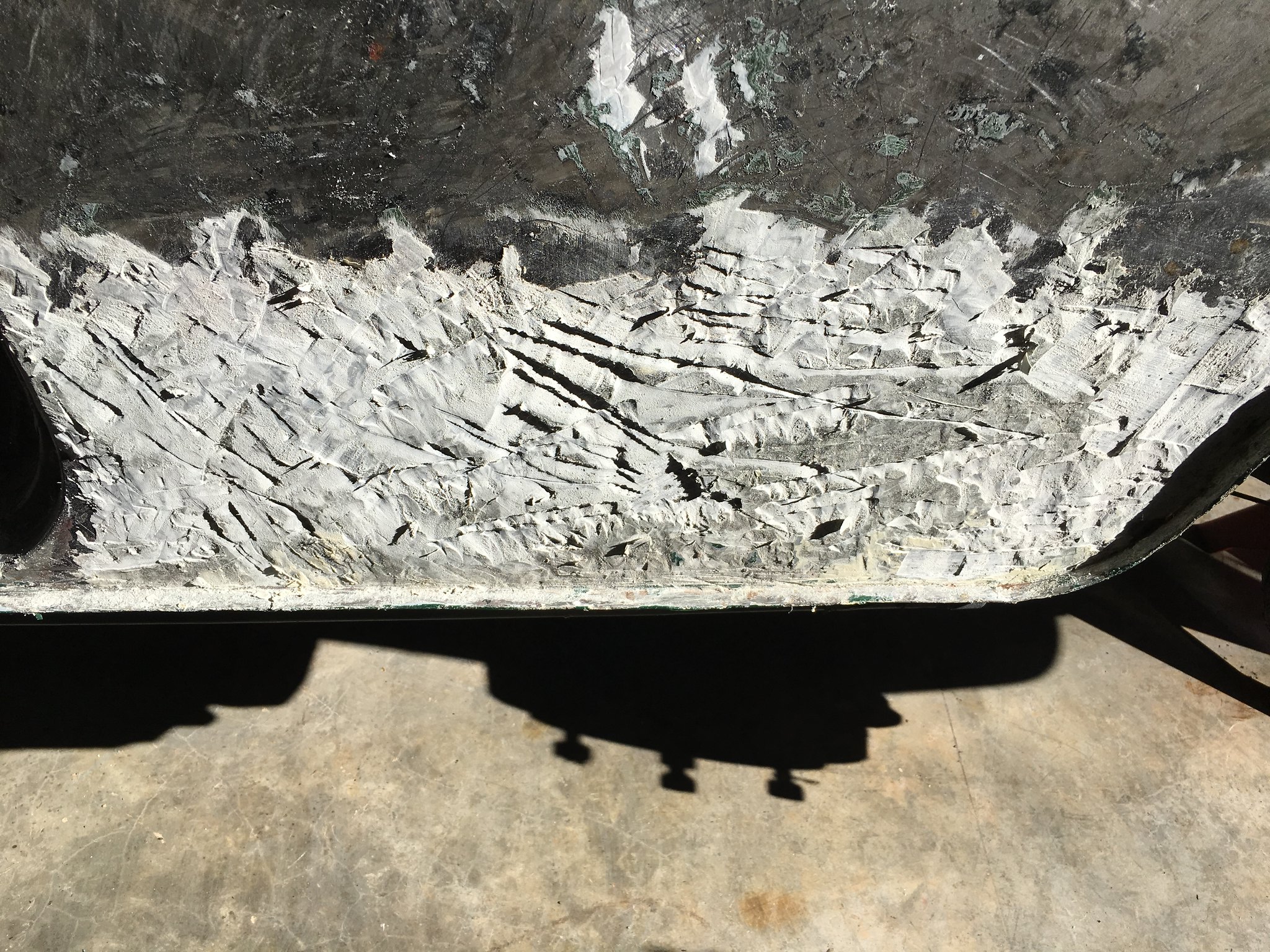 a near rainbow of colors..  so what color are you going back with?  Any change of mind..

Ever since my wife suggested that an all white approach would make it look like a Mini ambulance, I've been exploring other color options. I did some Photoshop work on a profile photo I found. I haven't added the Australian doors yet but I did simulate several of the mods I have in mind, beyond color changes:

Would be interested to hear feedback from all. Thanks in advance. 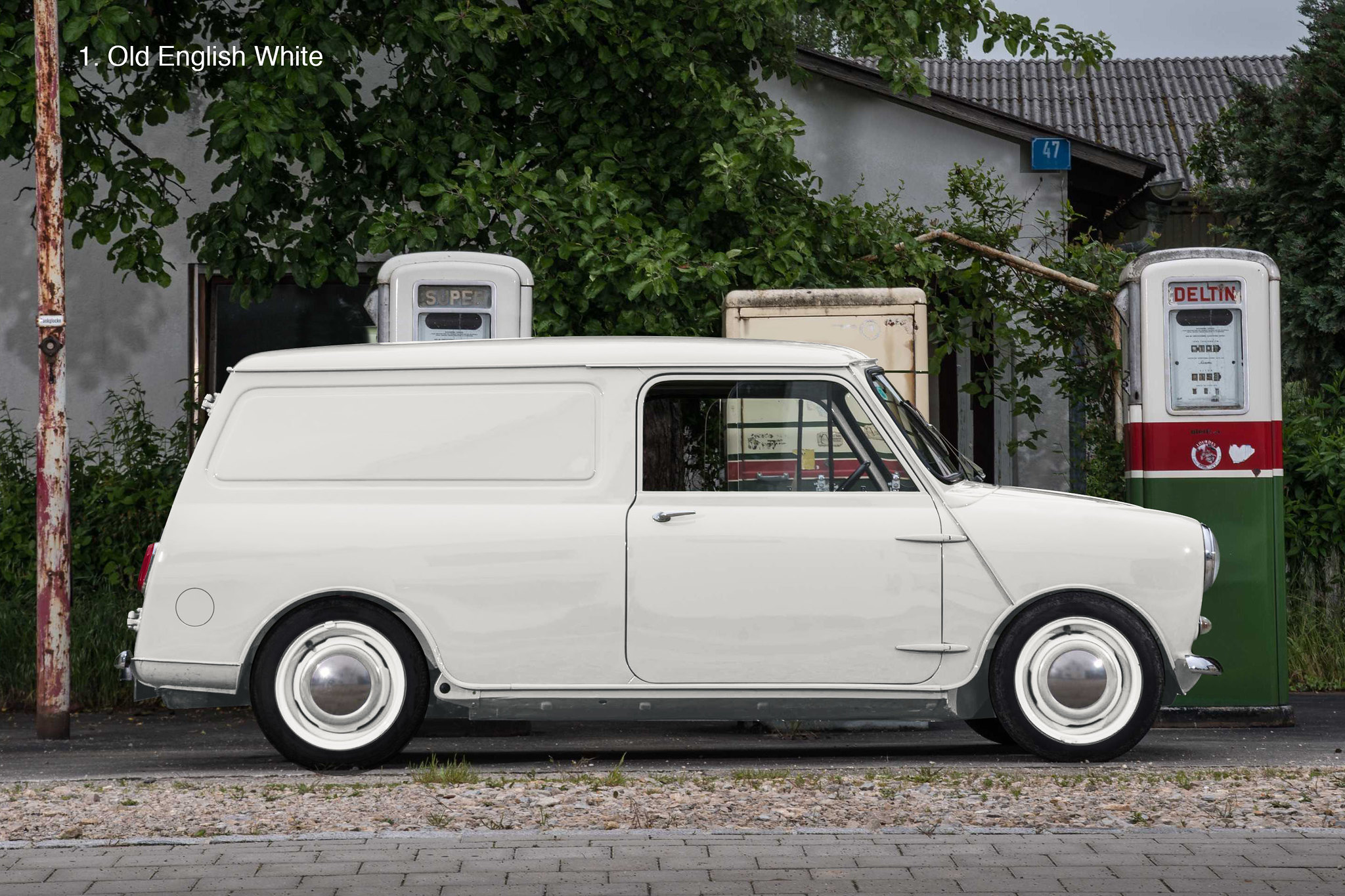 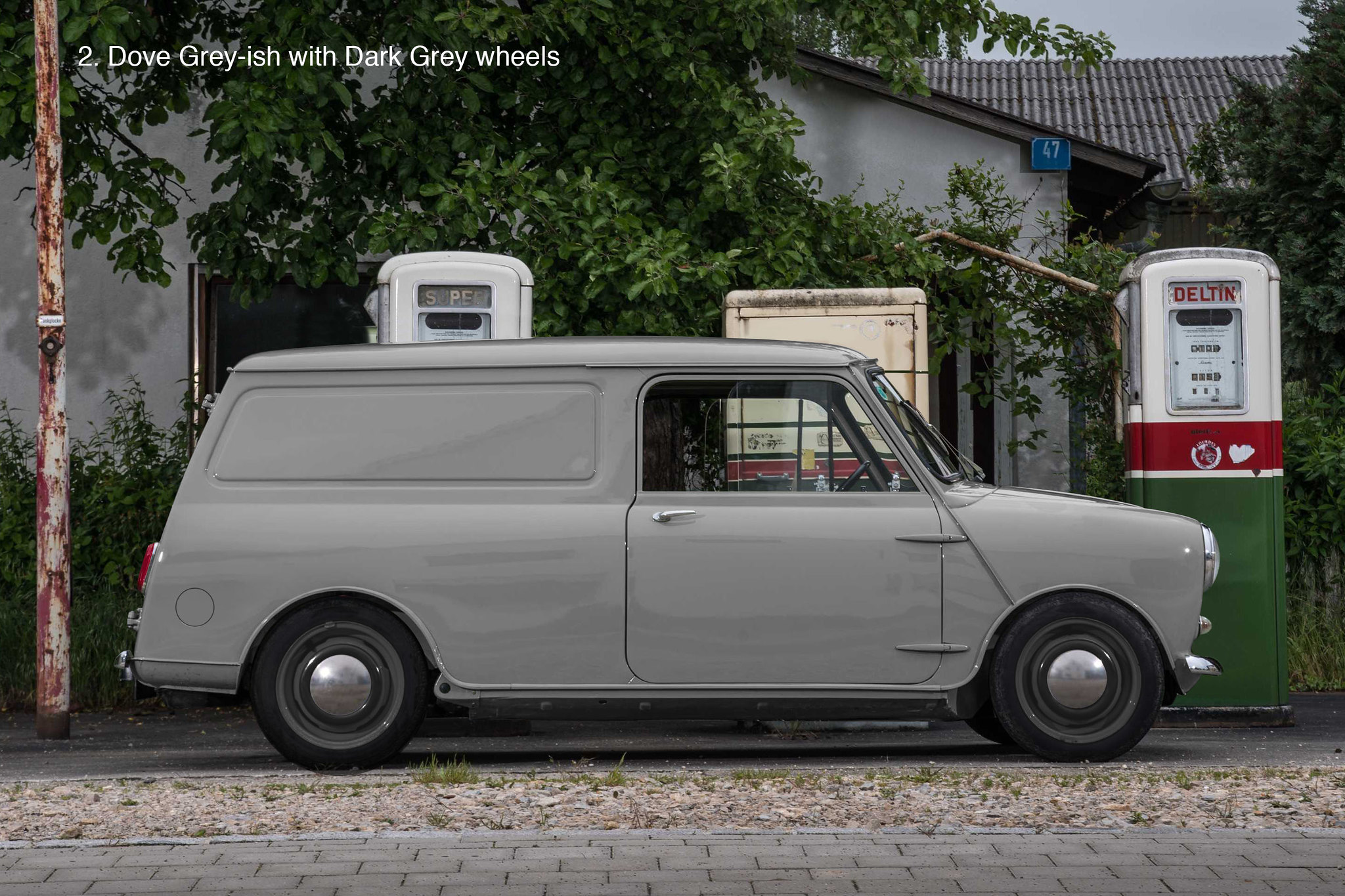 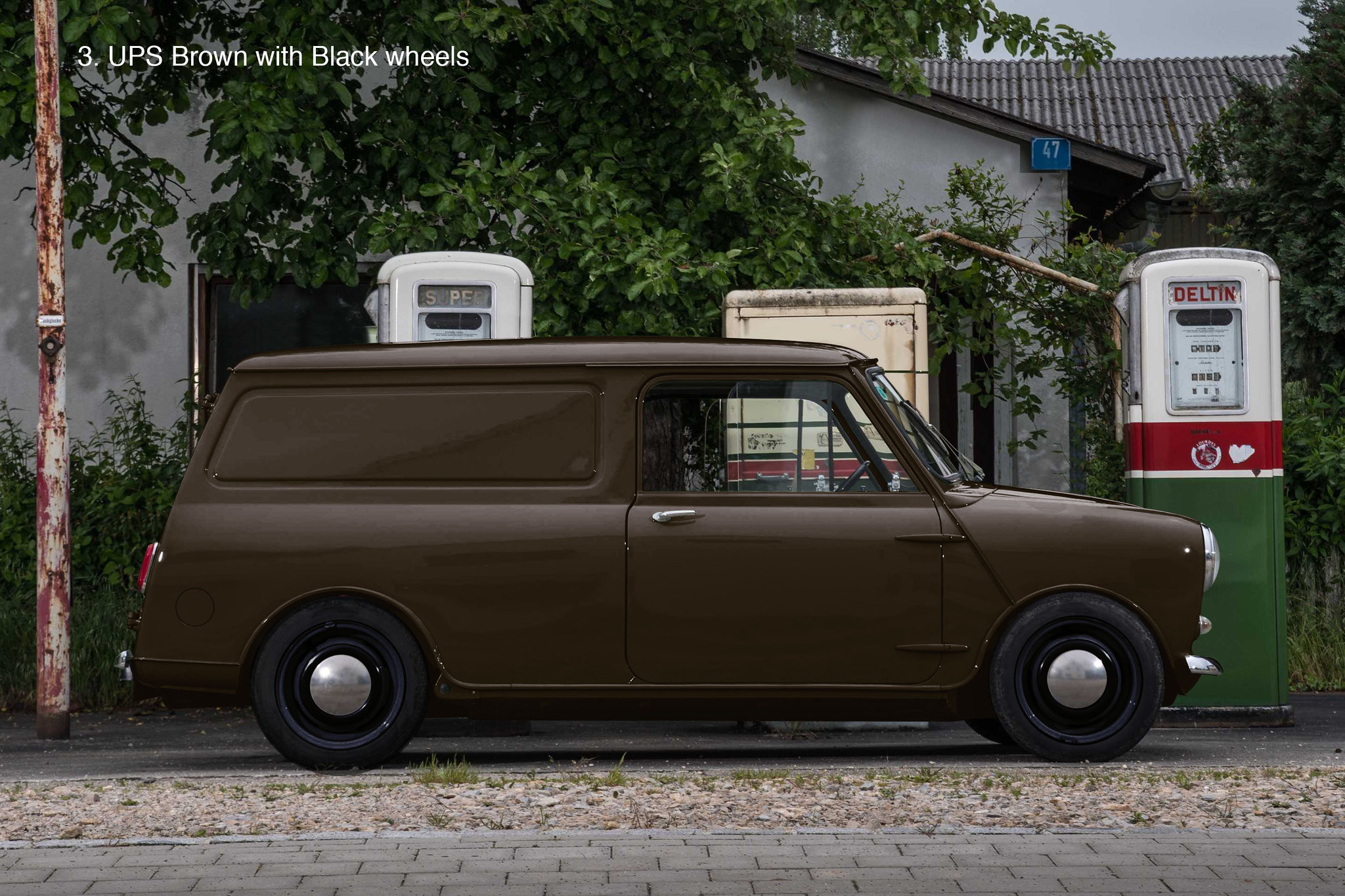 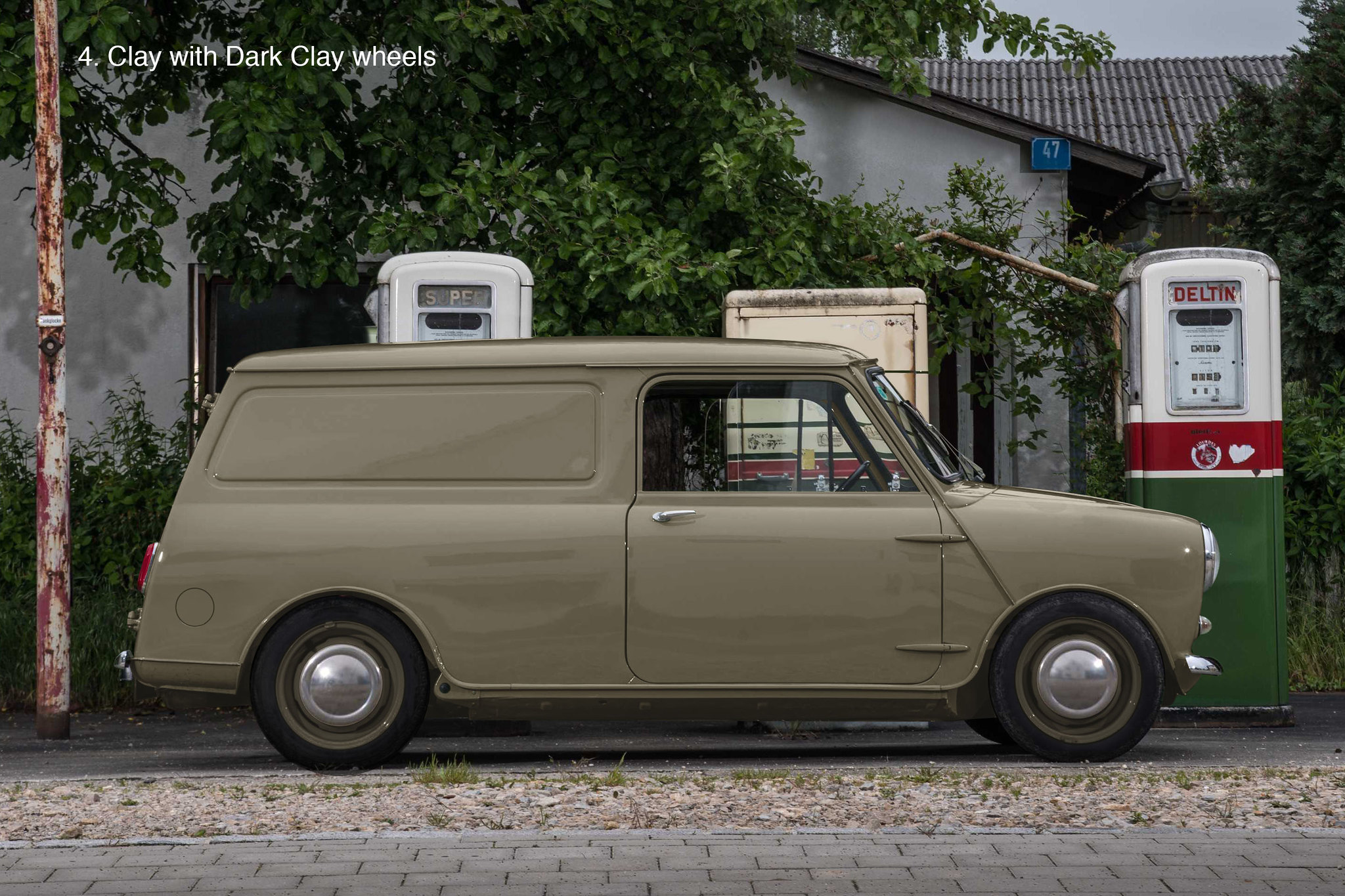 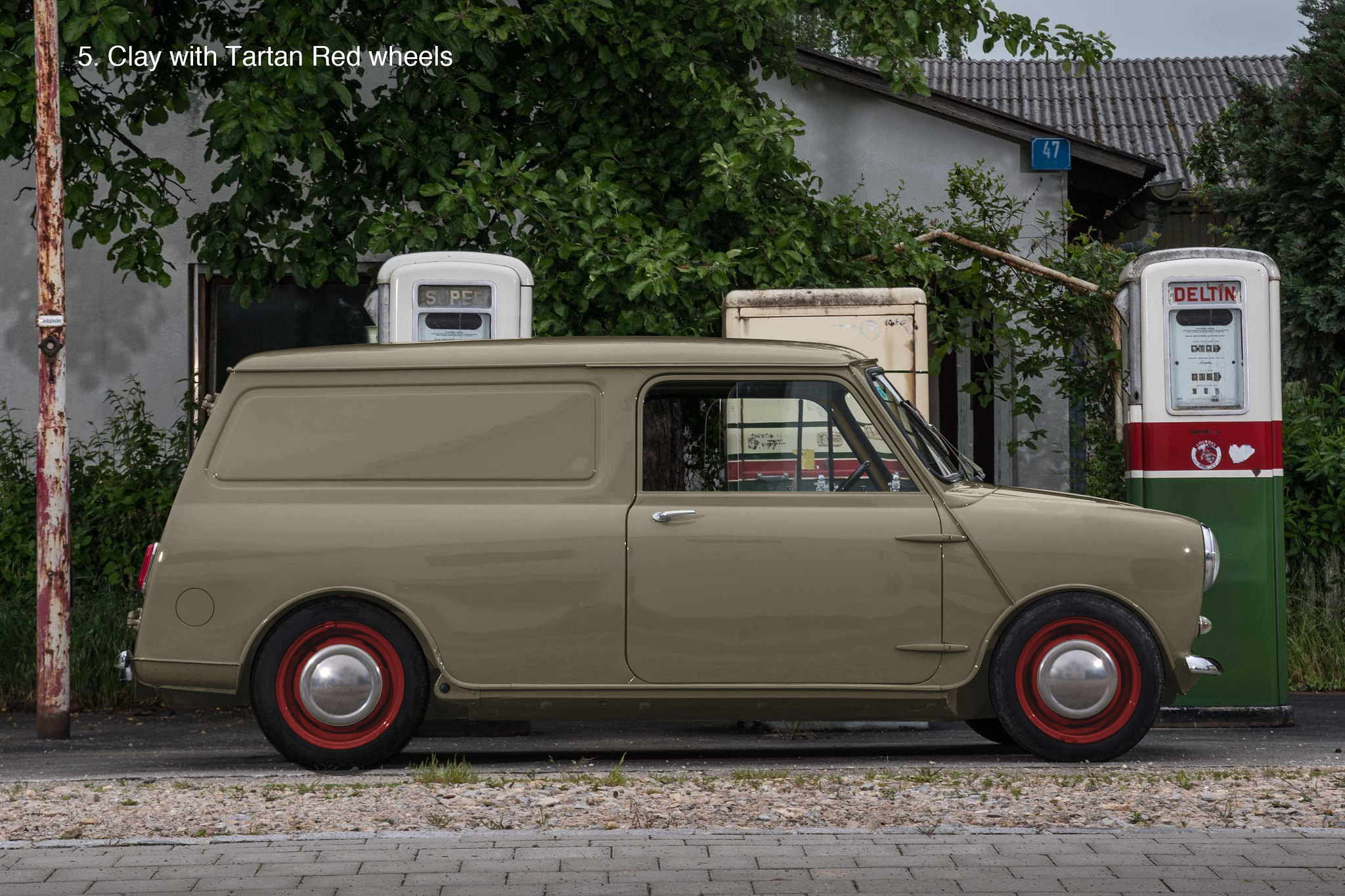 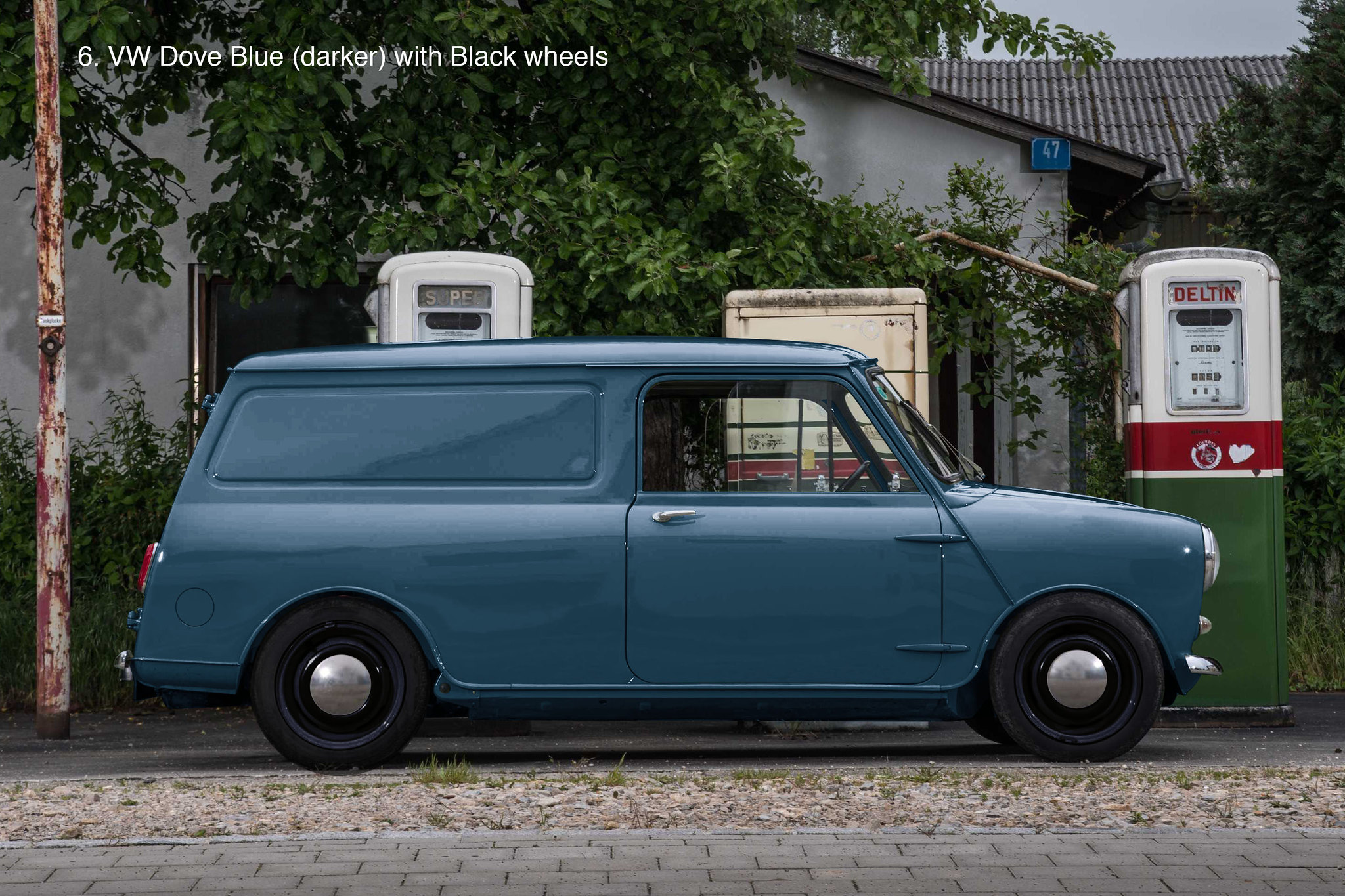 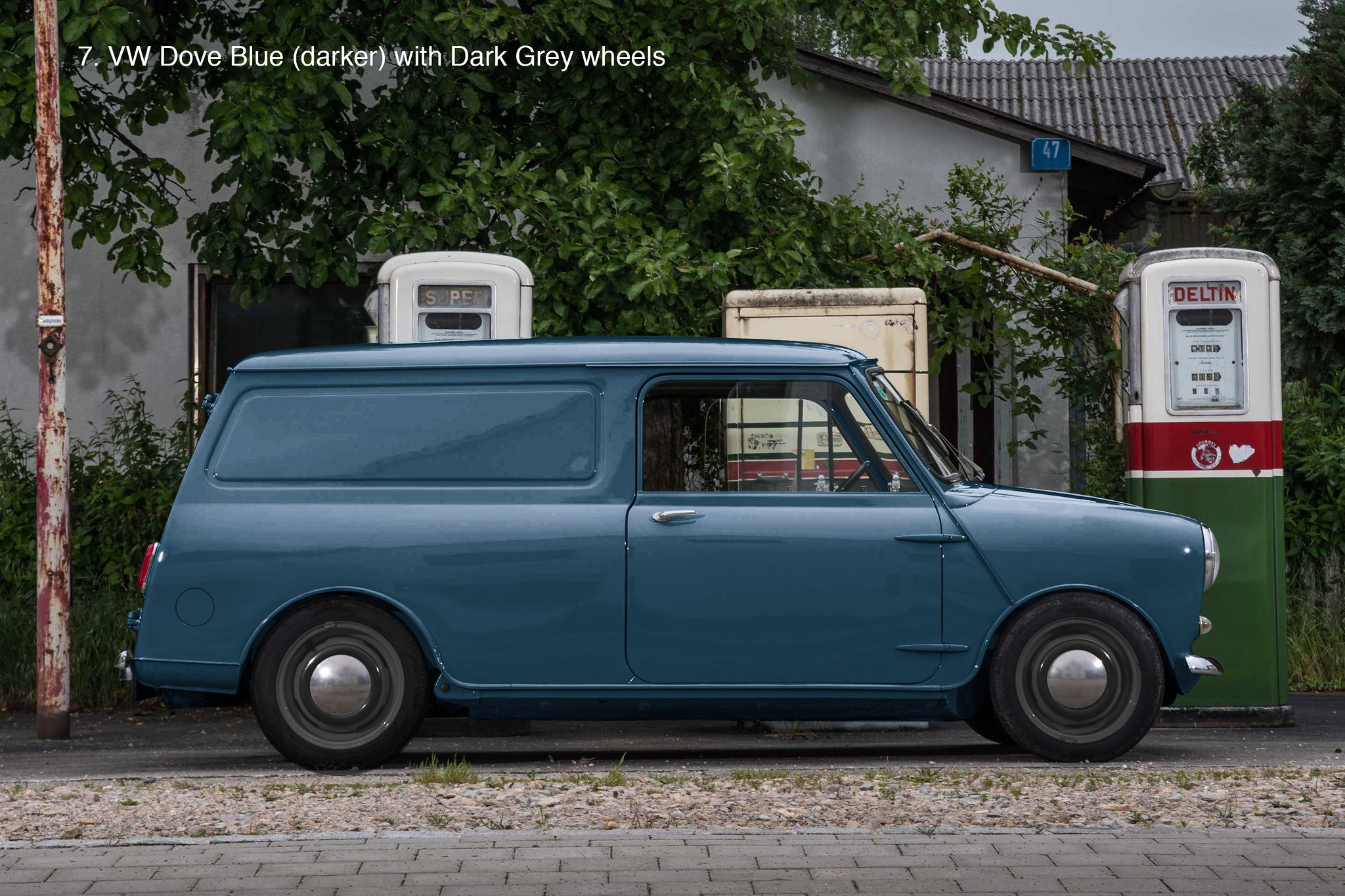 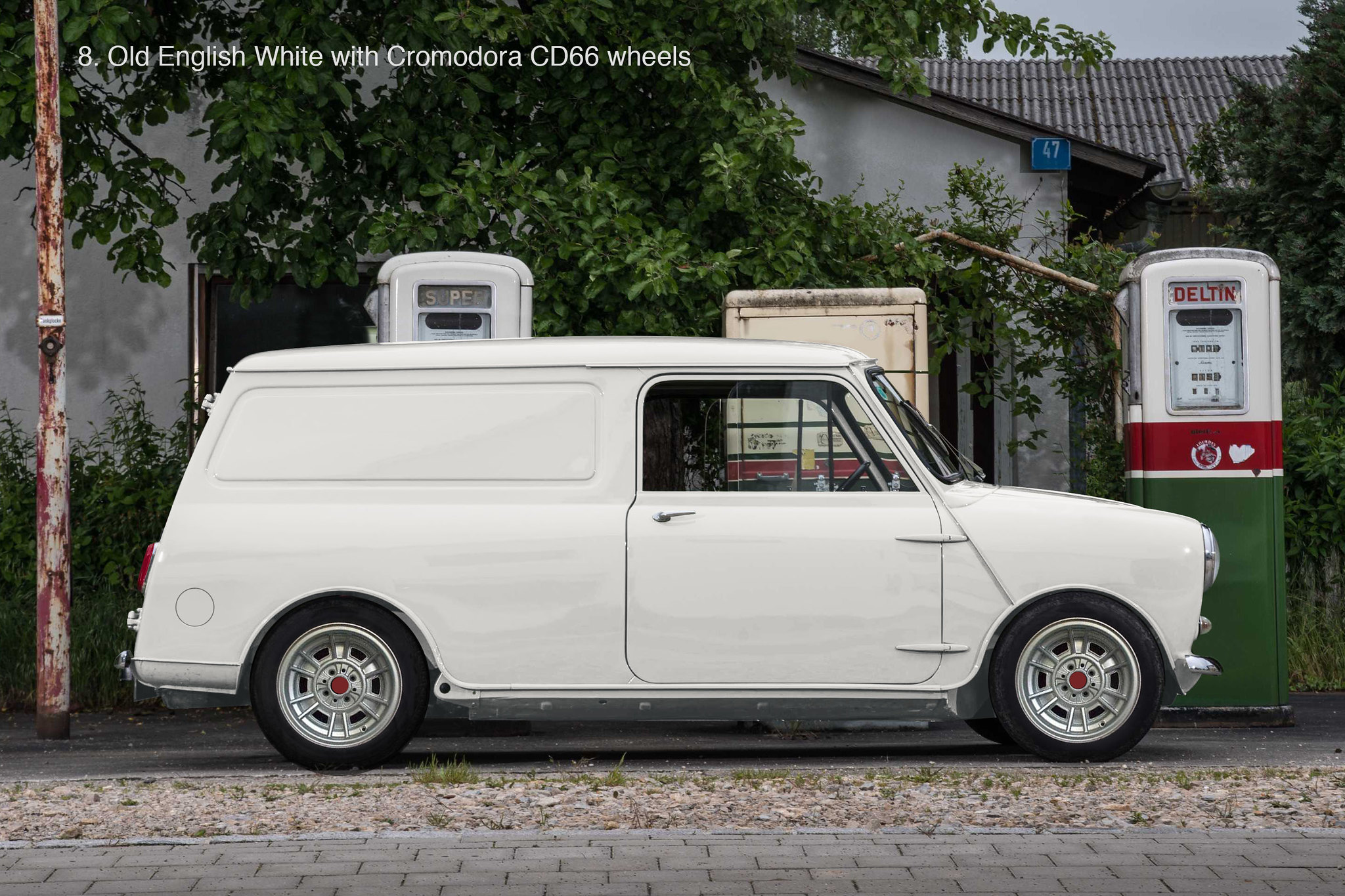 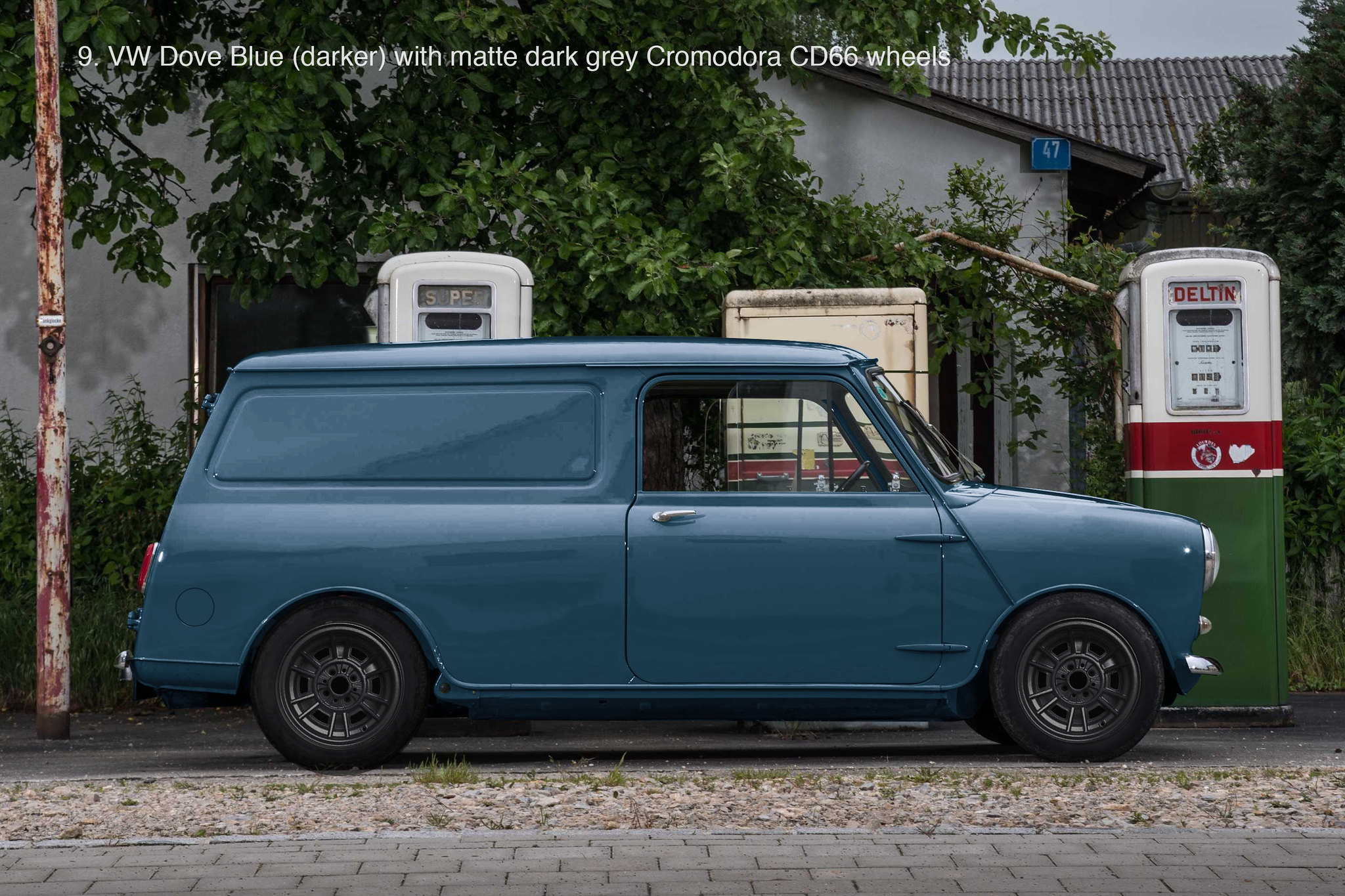 they all look good... hard choice I'm sure

They're all lovely, but I think dove grey or dove blue would look great with some white steelies. The last picture with the dark grey alloys is perfection I think. They give the car a real presence.

Quick question, why are you going with 13s instead of 10s?

Agreed they all look sweet slightly love the dove grey more.. ..perfect stance just the look I'm after on mine but  don't want to fit arches...

I'll have a grey one please with Chromadora alloys

They're all lovely, but I think dove grey or dove blue would look great with some white steelies. The last picture with the dark grey alloys is perfection I think. They give the car a real presence.

Quick question, why are you going with 13s instead of 10s?


I like 10s but I’m not a huge fan of their proportions on a van...they kinda get lost in my opinion. I also like the idea of seeing as much of a steel wheel as possible, even going to the extent of painting a portion of the hubcap the wheel color.

Thanks for the feedback.

Thanks for the color feedback, all. I'm getting a "I told you so" from my wife who was a fan of the Dove Grey as well.

Progress has been slow but steady. I've been able to make progress most evenings after work for an hour or more. Still, the layers of paint require multiple applications of strippers, scraping, repeating. Hoping to have the roof and front end completed this weekend. The driver's side quarter panel and rear doors are on the to-do list but I'm unsure about the inside panels and bulkhead right now. I may still have the mobile blasting company handle those. 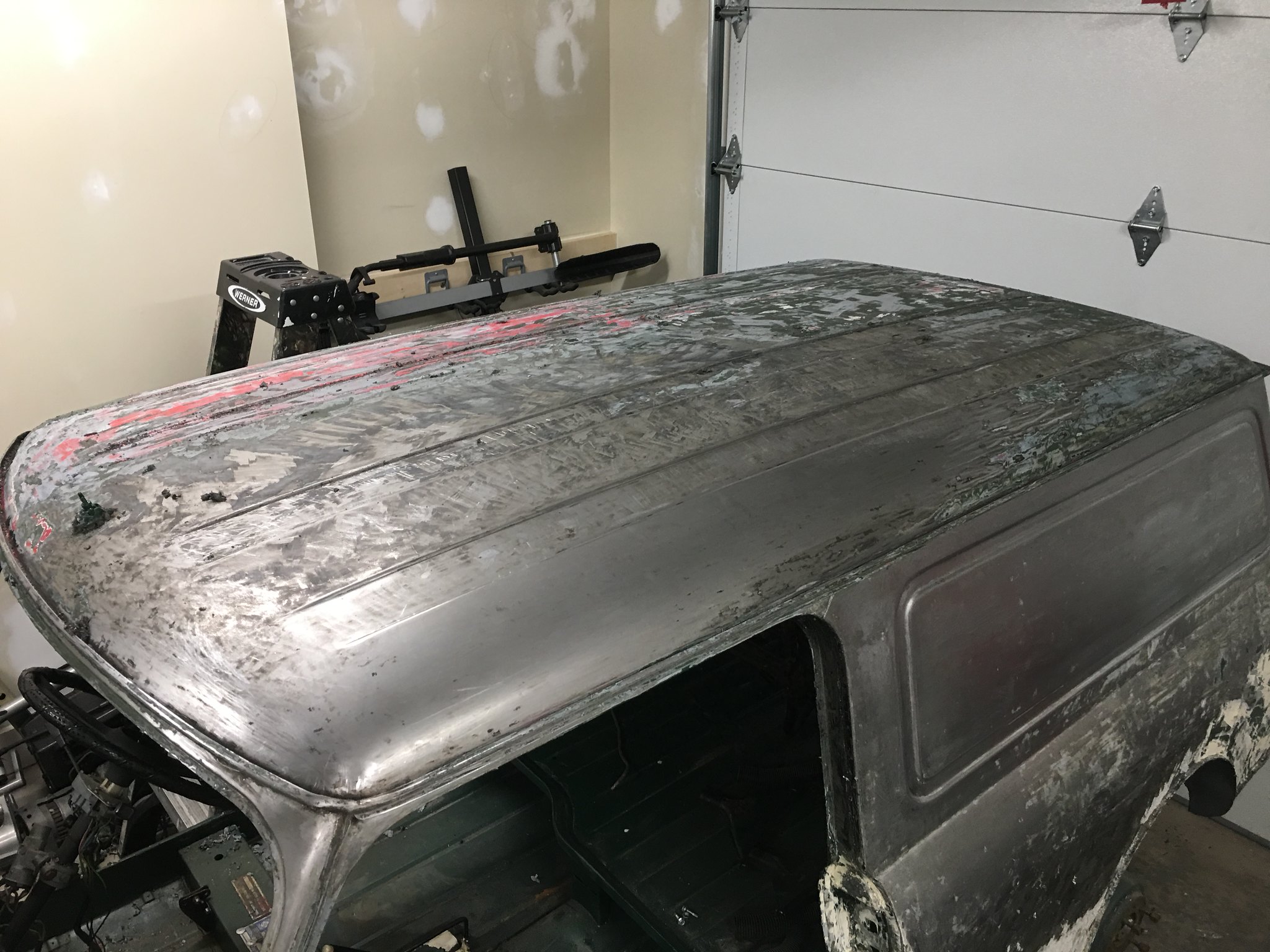 Driving reminder that had been buried under dash rail paint: 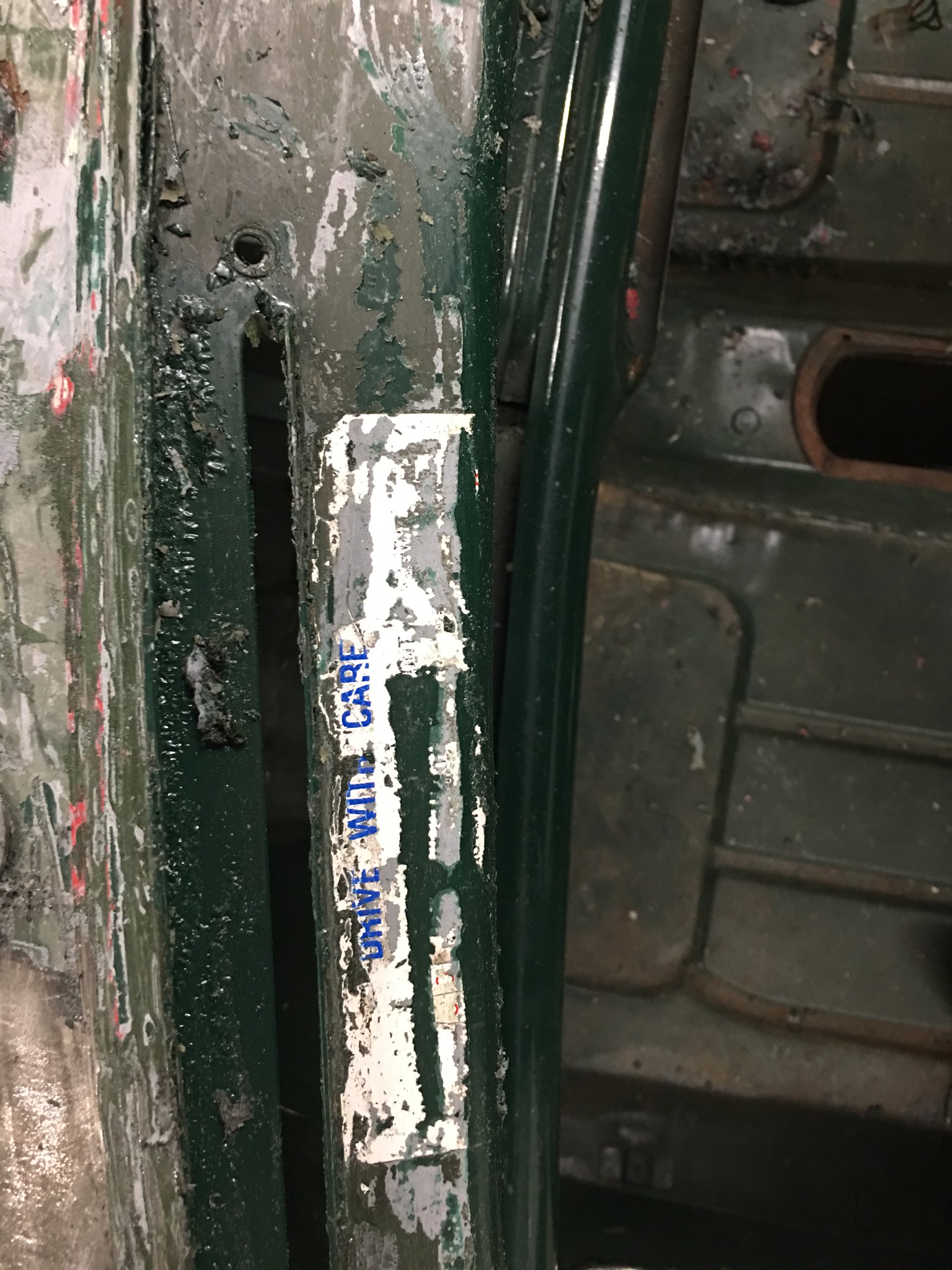 One of the doors is just about complete. I'm not stripping the other one as I've decided to sell both of the Australian doors to a friend of mine... I'm replacing them with Mk3 internal hinge doors (yes, I know that this swap will involve a whole lot of metal work beyond simply getting new doors). 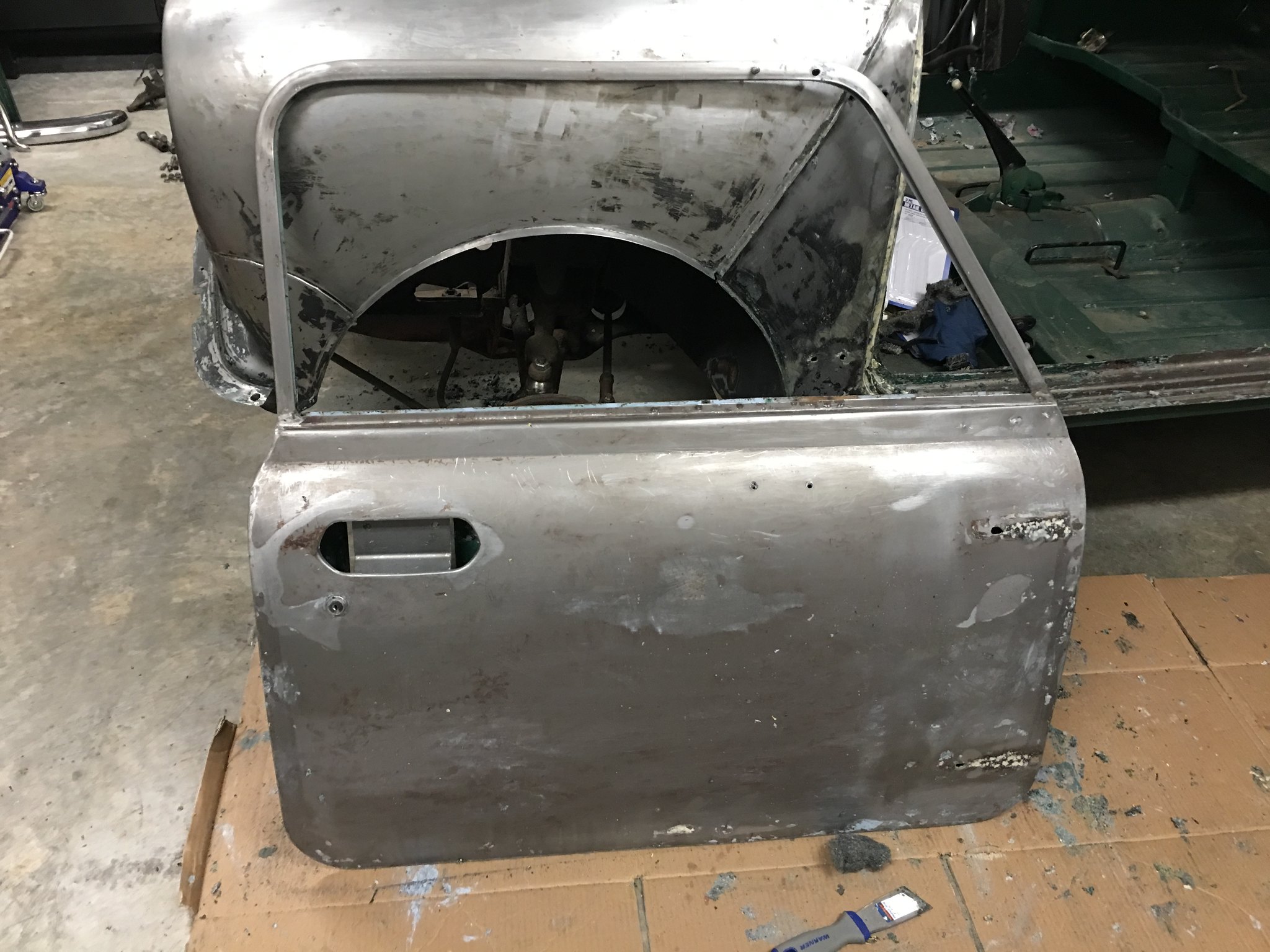 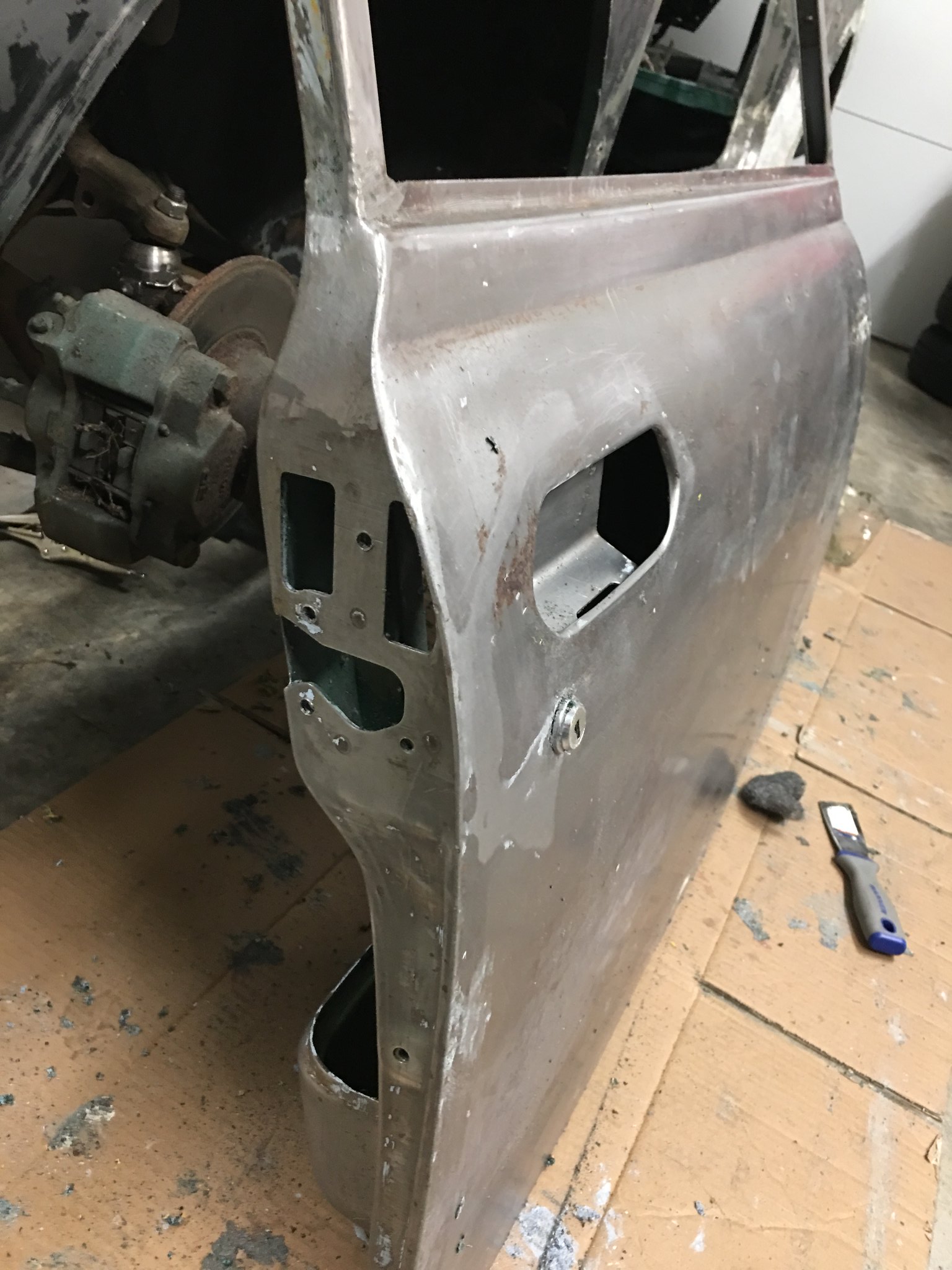 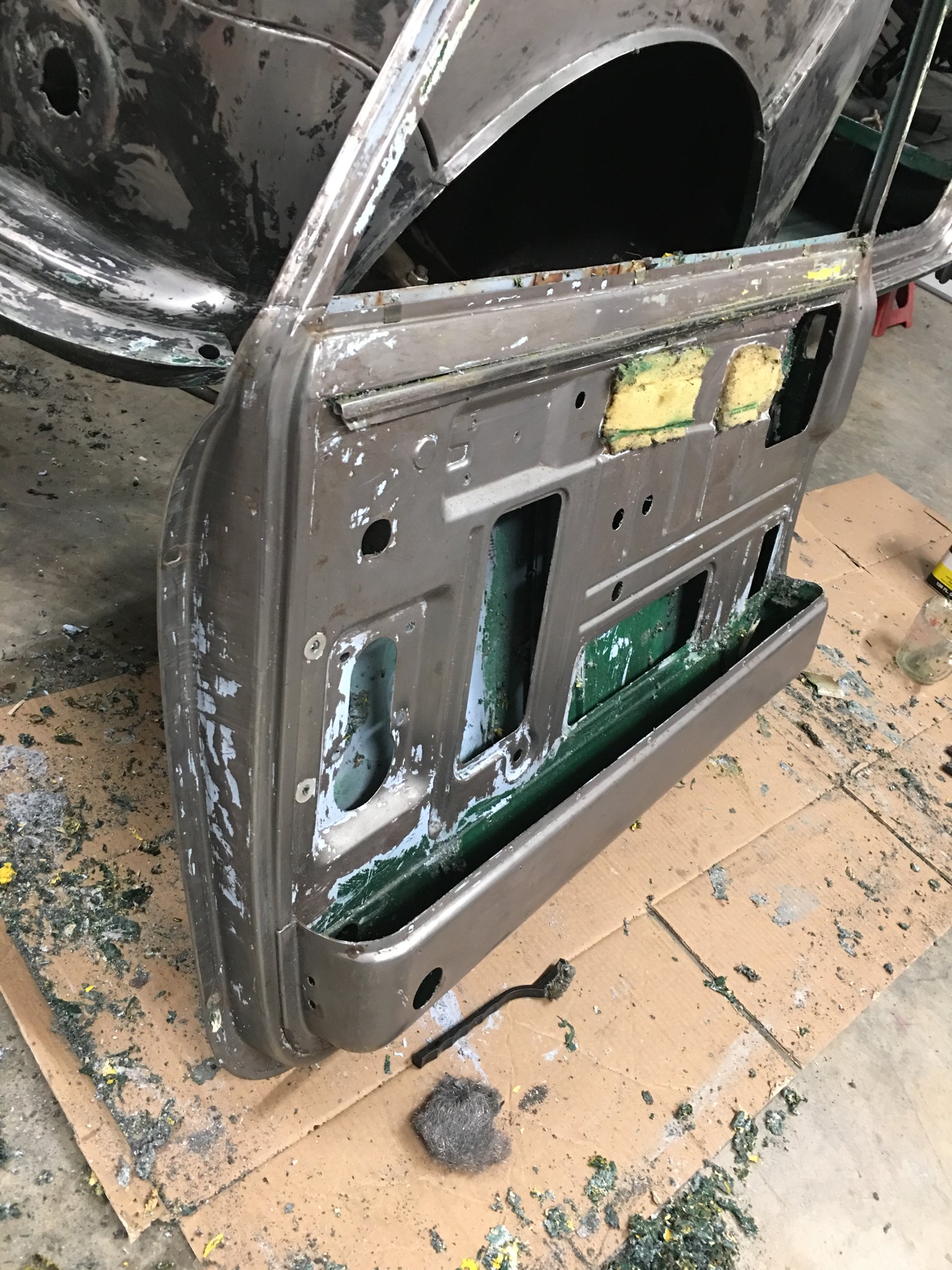 Would like to have all of the exterior sheet metal stripped down to the condition of this wing by the end of the month. 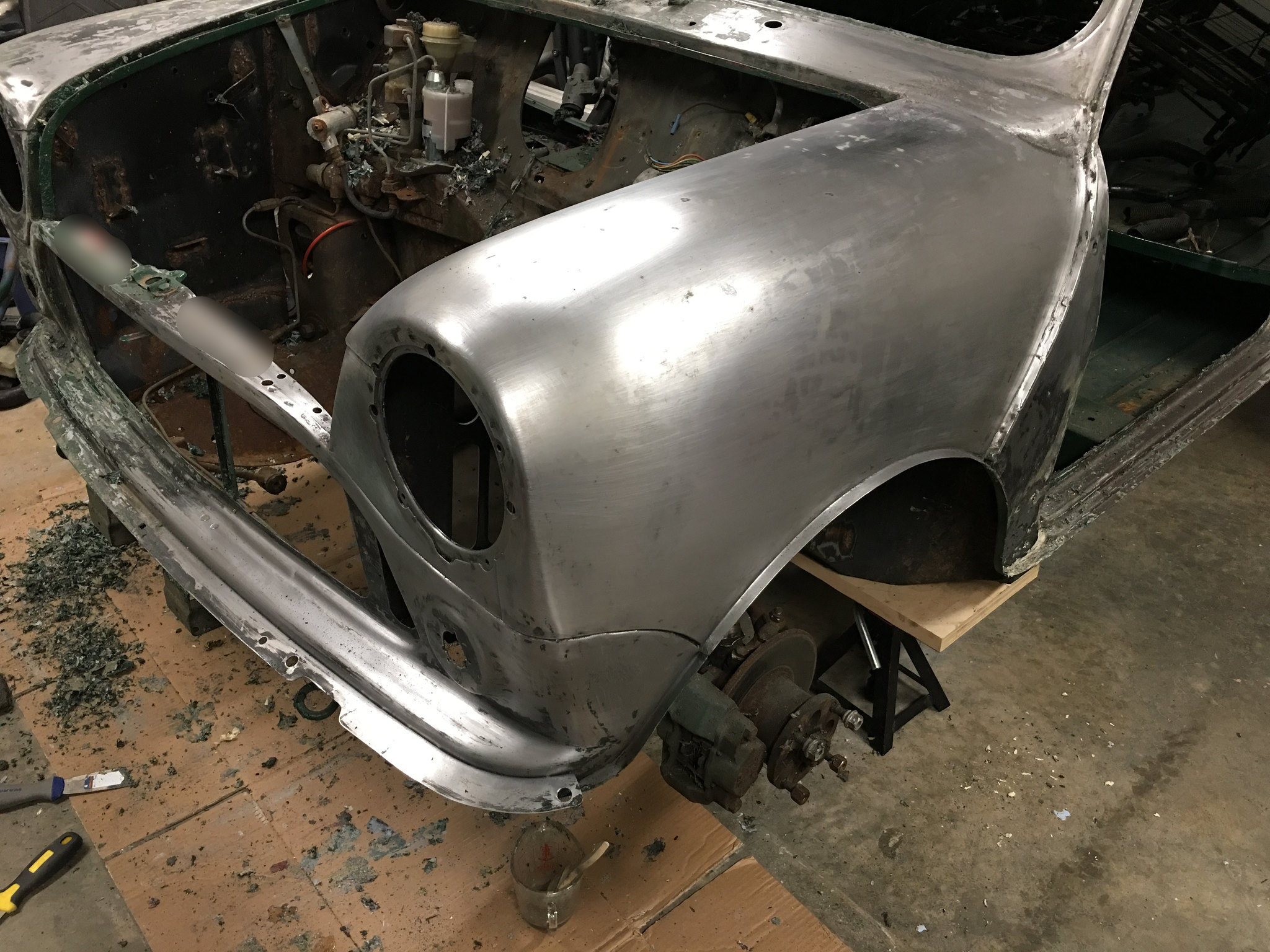 No rain today and great temperatures made for some big progress today.

I was just about done with the roof but those sculpted lower quarter panels were bothering me. 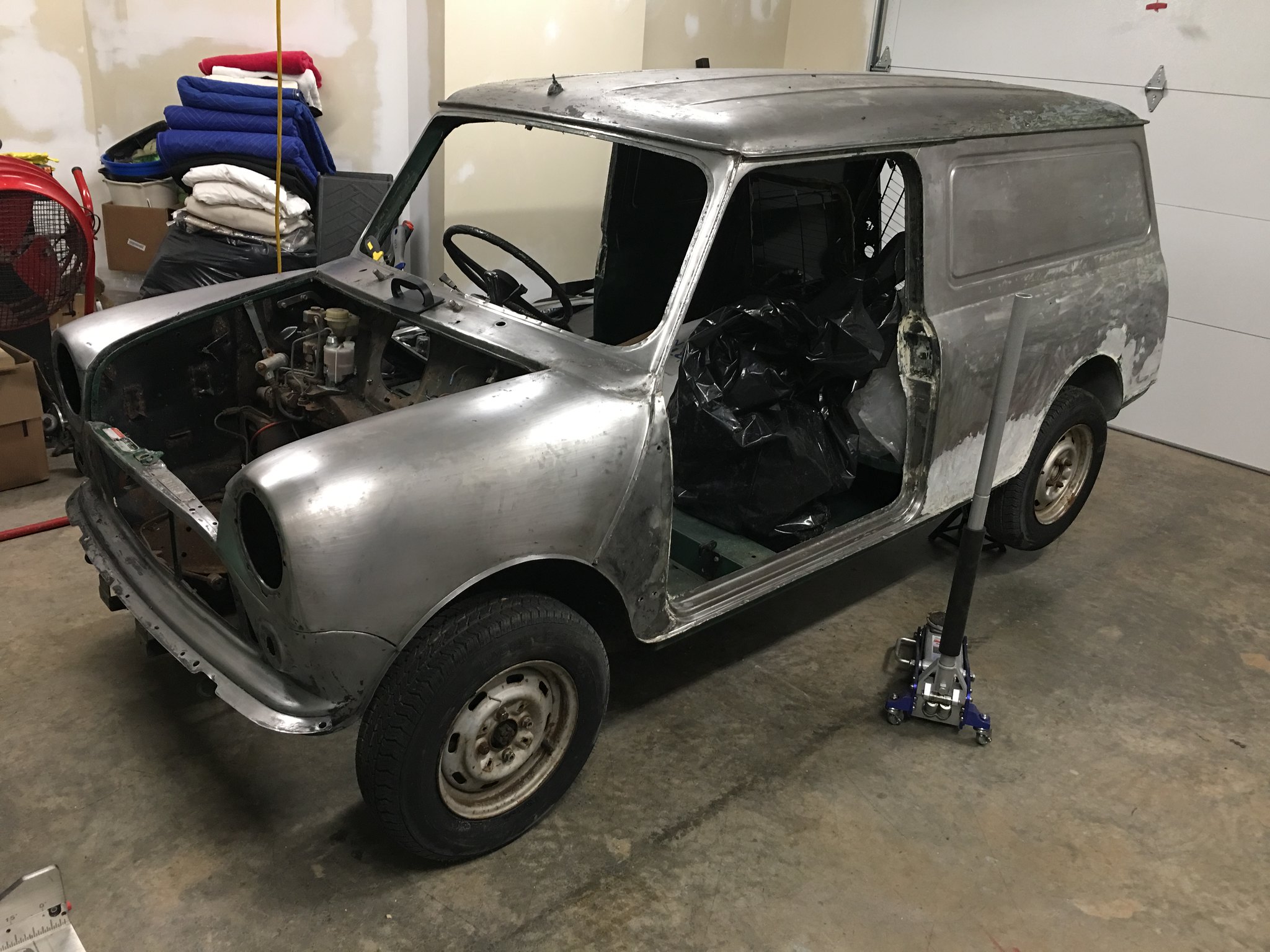 The chemical stripper just isn't up to the task so I purchased several coarse paint and rust removal discs for my grinder, rolled out onto the drive and did my best to create a bondo dust storm. 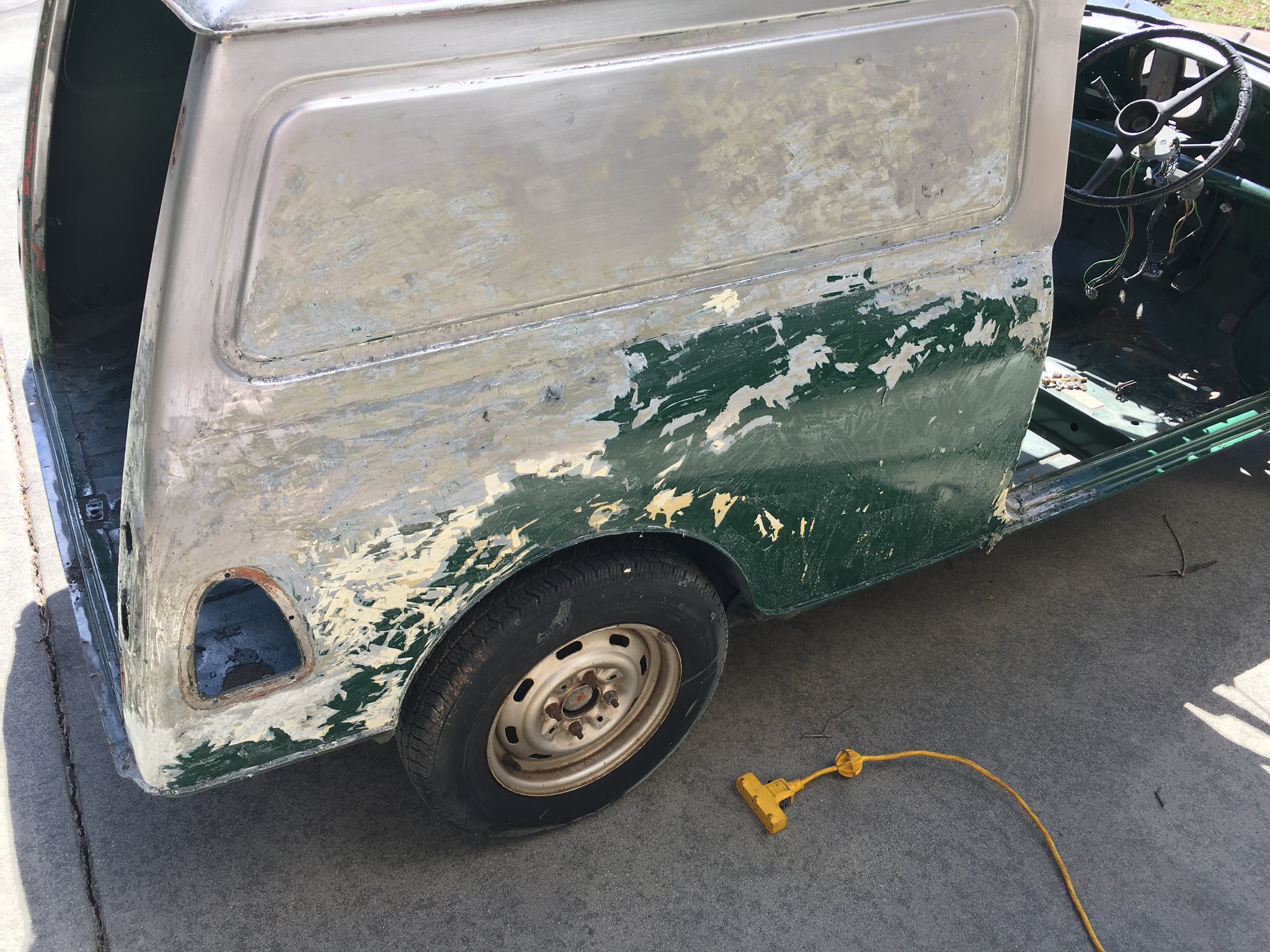 The good news - most of the roof is finished. I still need to go over all of it with 80 grit on the D/A but aside from one small dent, it's in great shape, gutters included.

The bad news - both of the quarter panels are toast. The lower repair panels had previously been installed by a gorilla and one that didn't seem to care about how much heat he put into the panels. I see why there was 1/2" on filler as the underlying steel is an absolute warped and dented mess. I suppose with a helluva lot of work, they could be salvaged but the time required would be extensive and they would never be as nice as fresh panels so, it looks like some more items are being added to my shopping list. 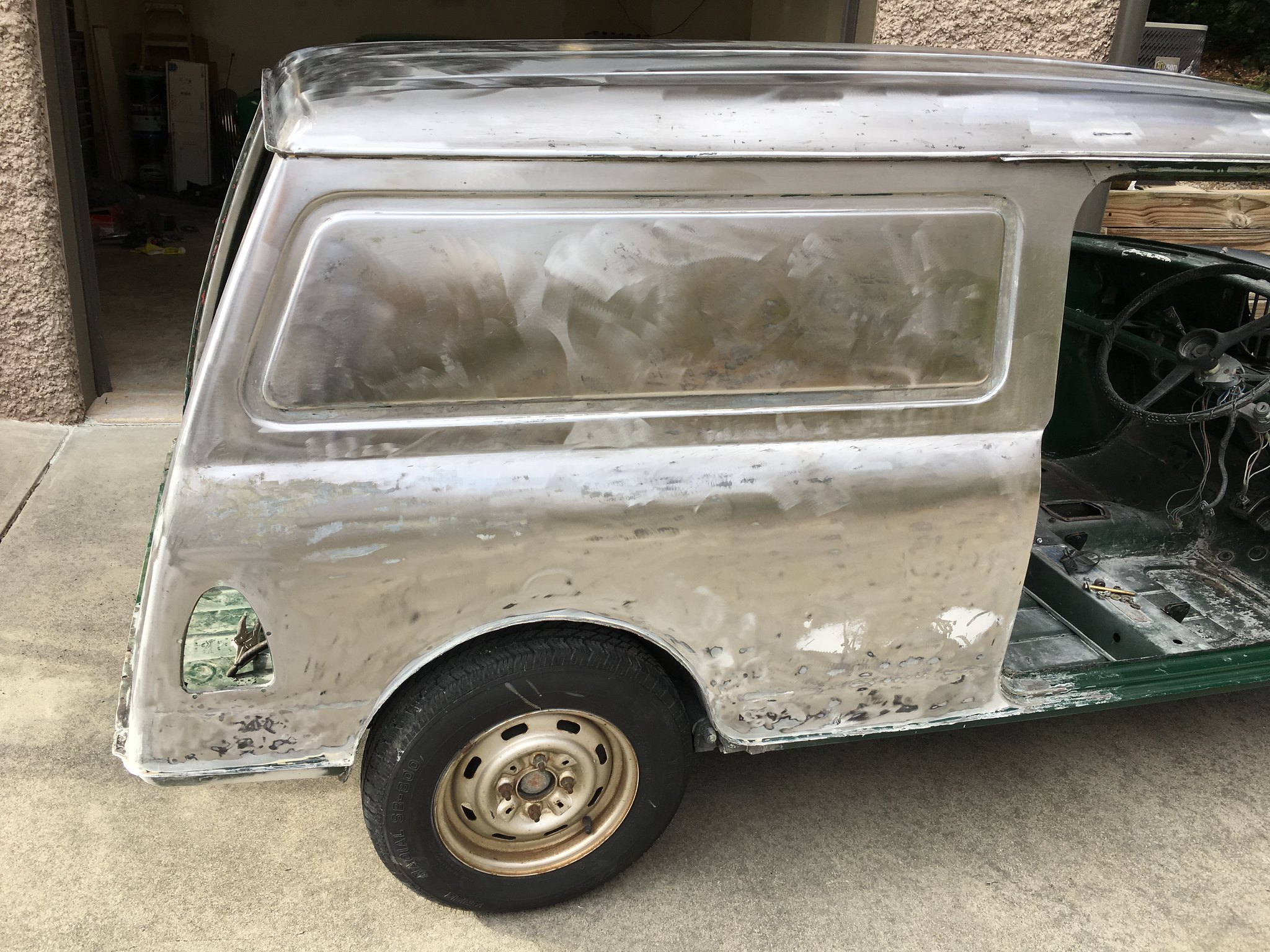 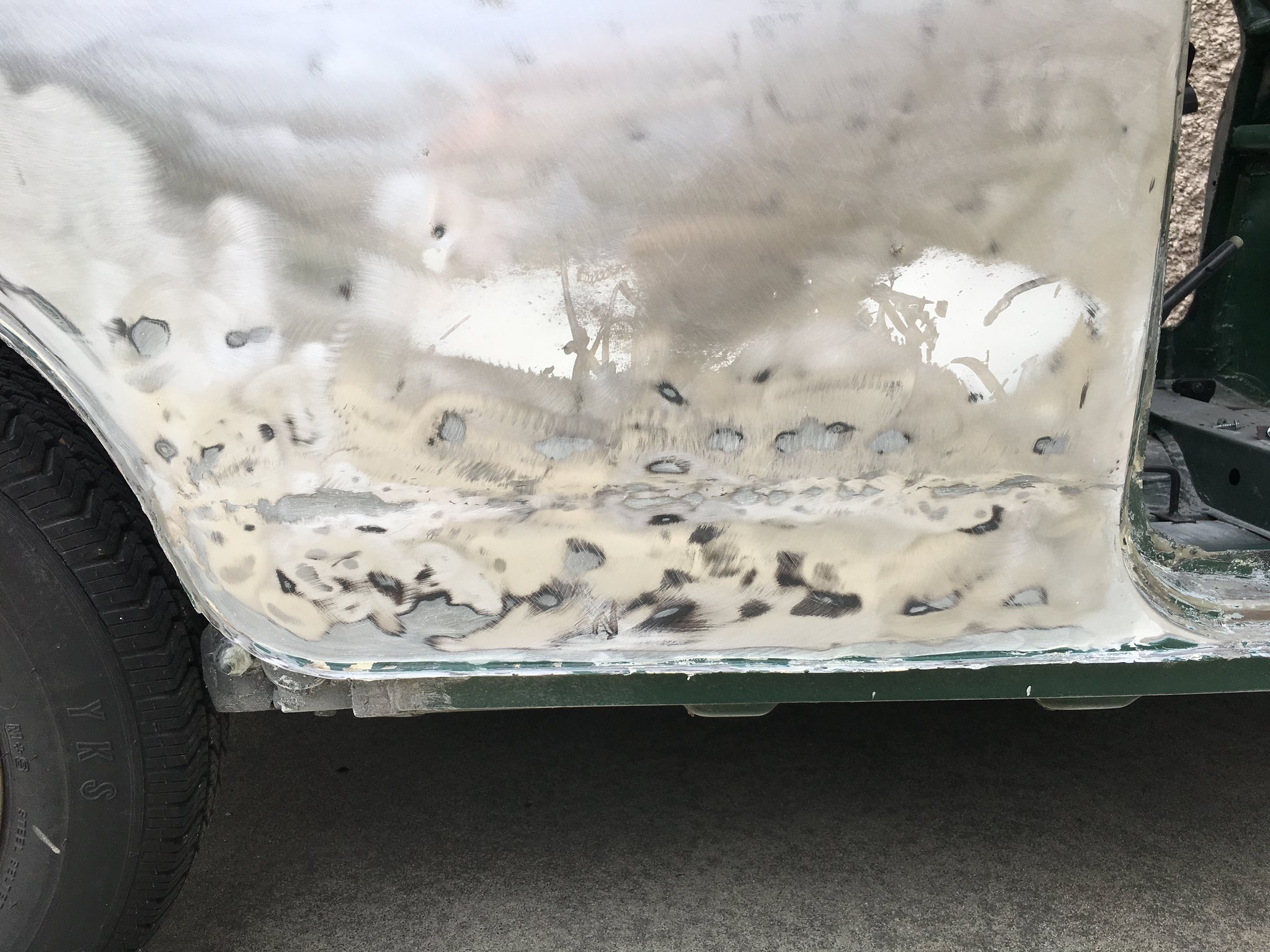 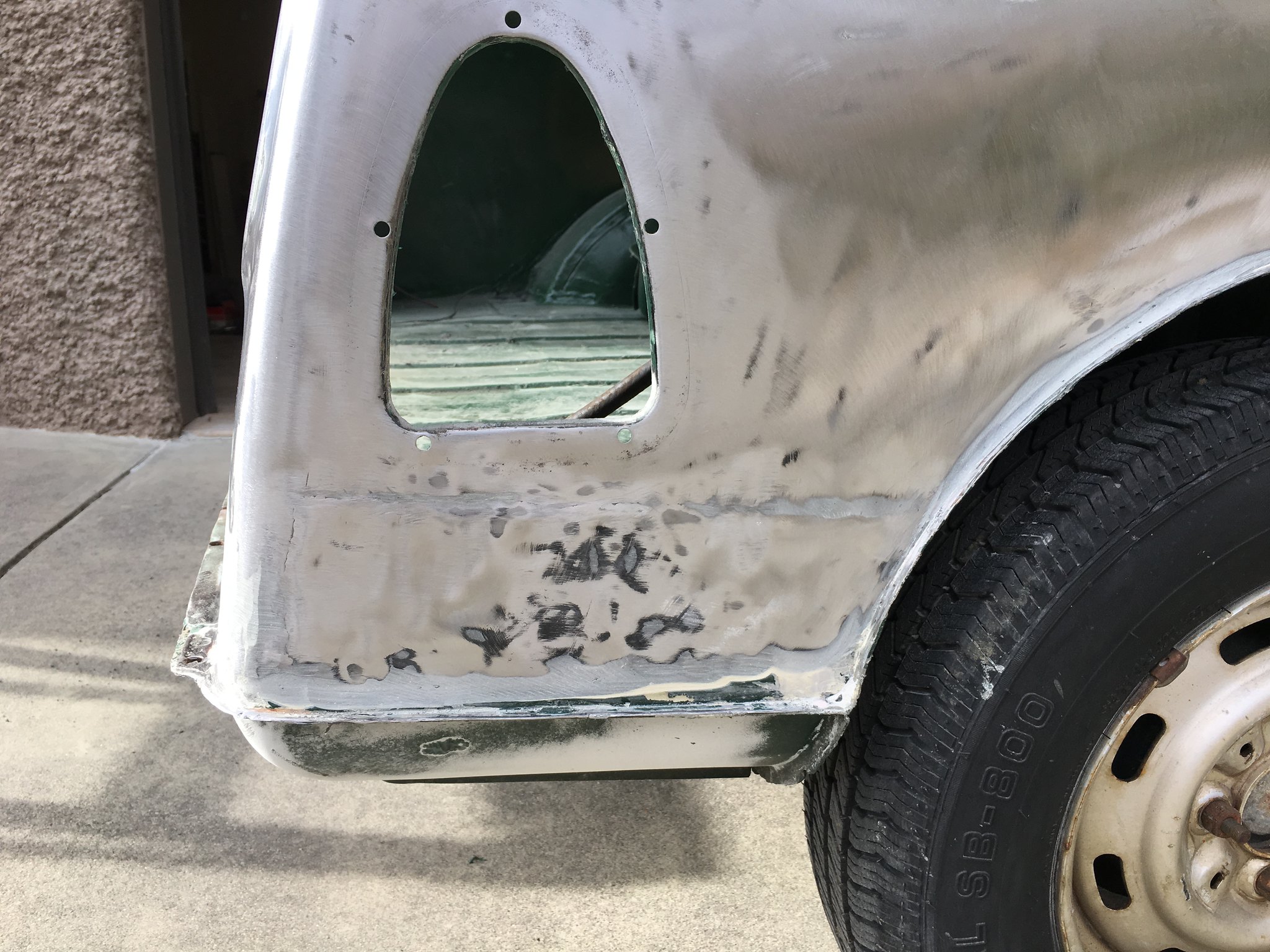 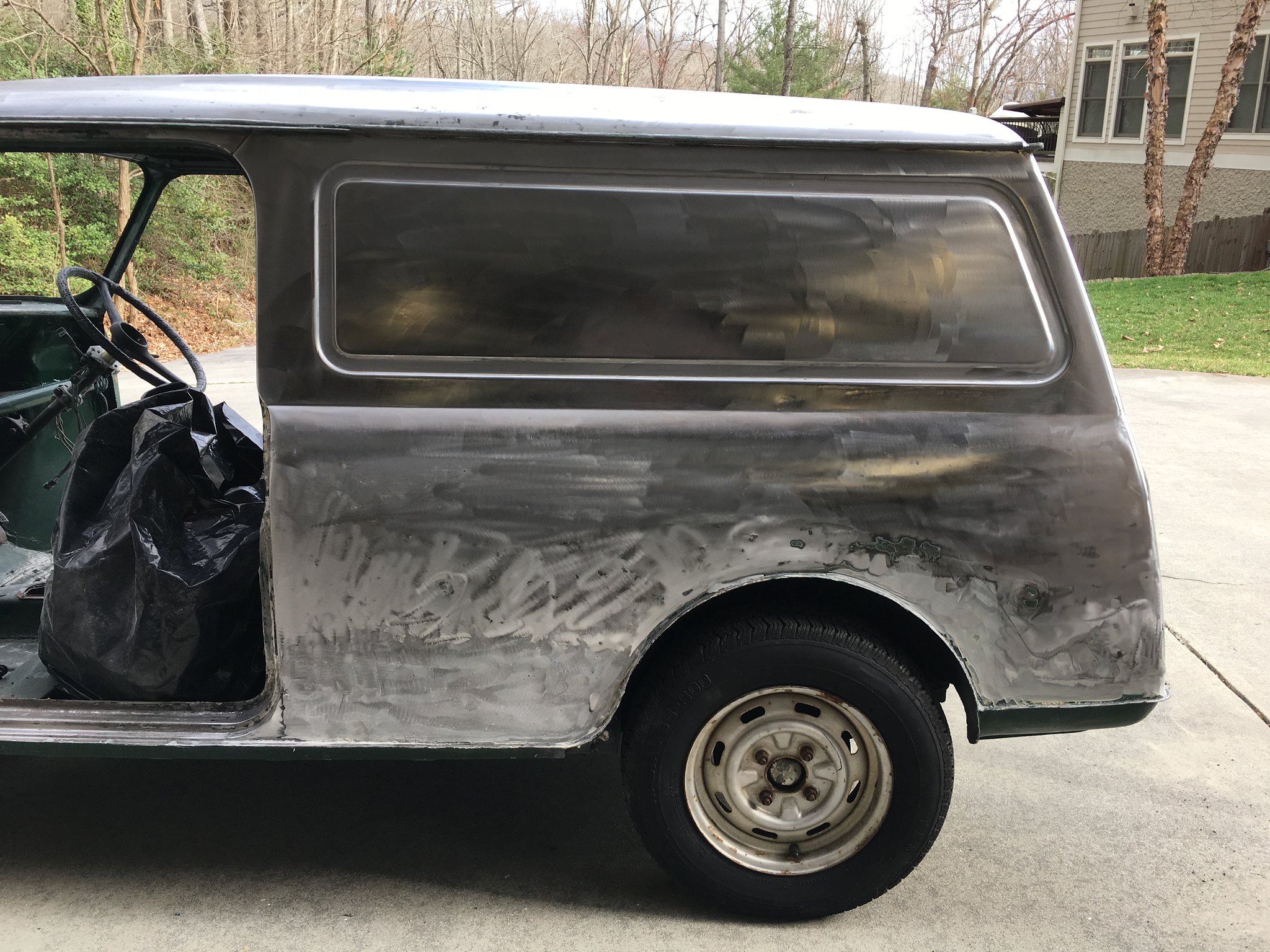 Since Spring is at the doorstep, I decided to rearrange things in the garage. The '79, which has been hibernating, is swapping places with the van. The java green saloon is going to get a fresh radiator, a couple of gaskets replaced and I'm going to rebuild the carb. After all that, it should be ready for some Spring/Summertime miles. 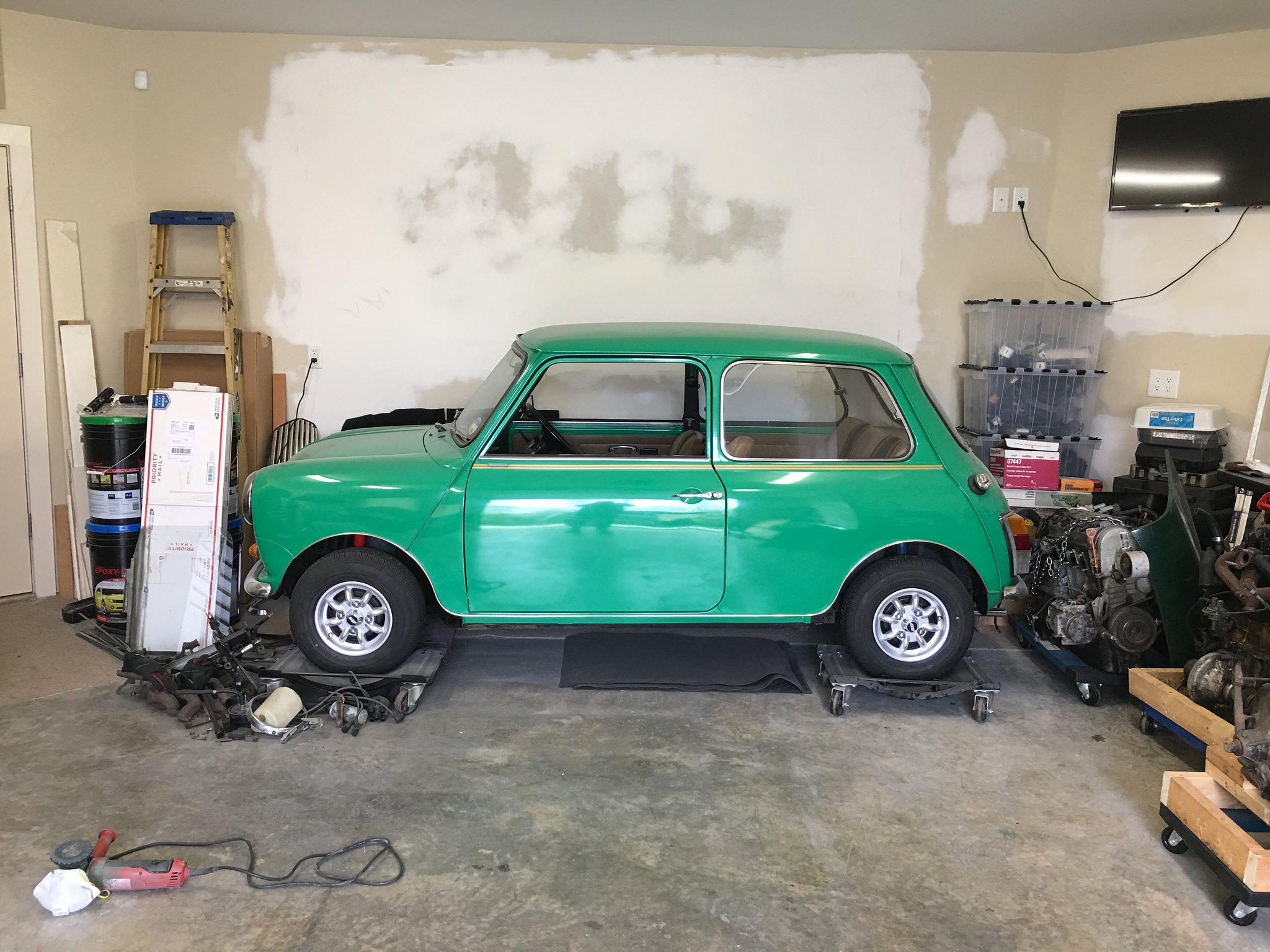 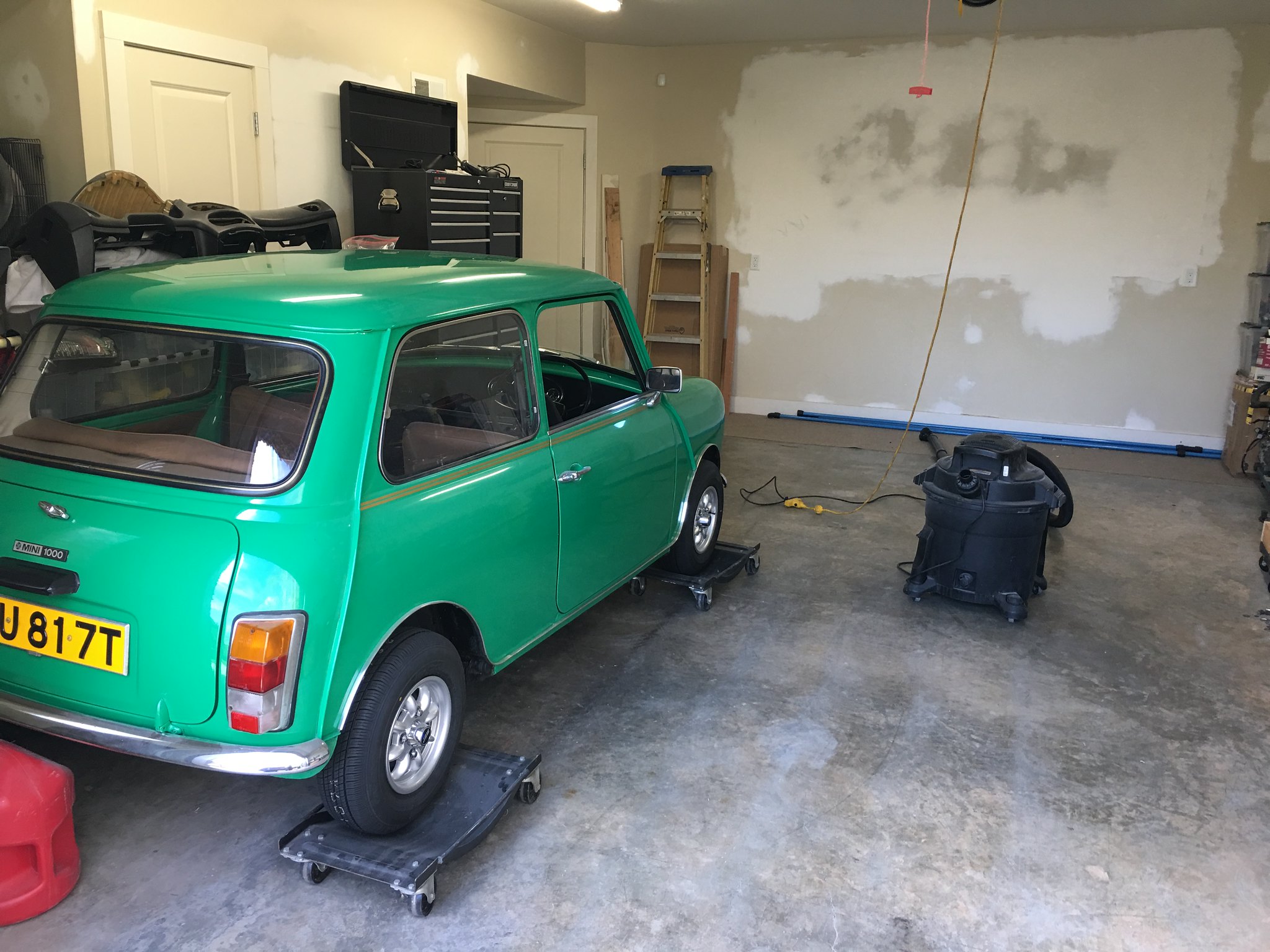 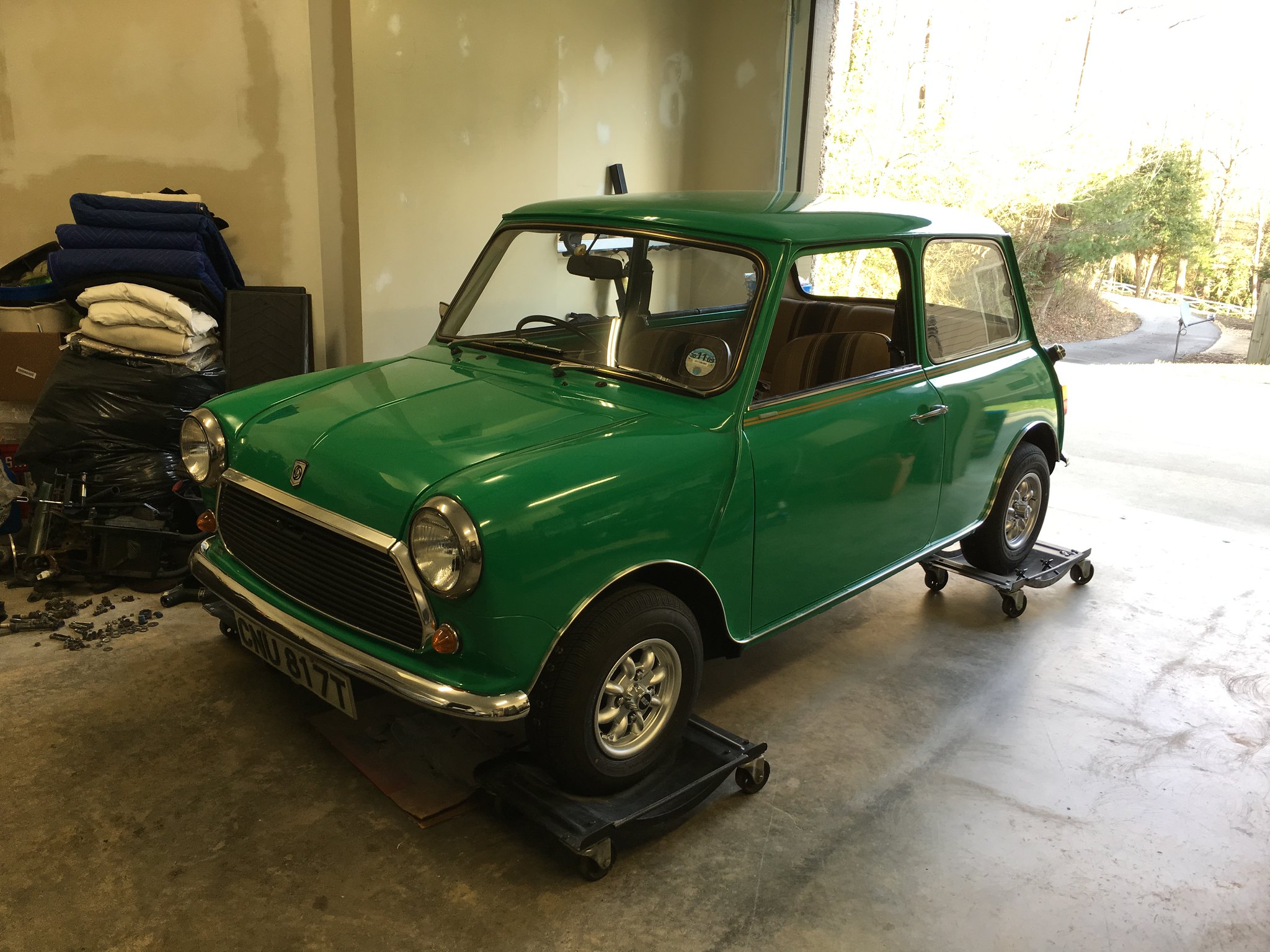 I might be selling the '79 to make room. if it weren't for the space, I'd keep it as it is an unmolested, rust-free original. But between that car, my '91, the van and a growing collection of engines, something has got to give. 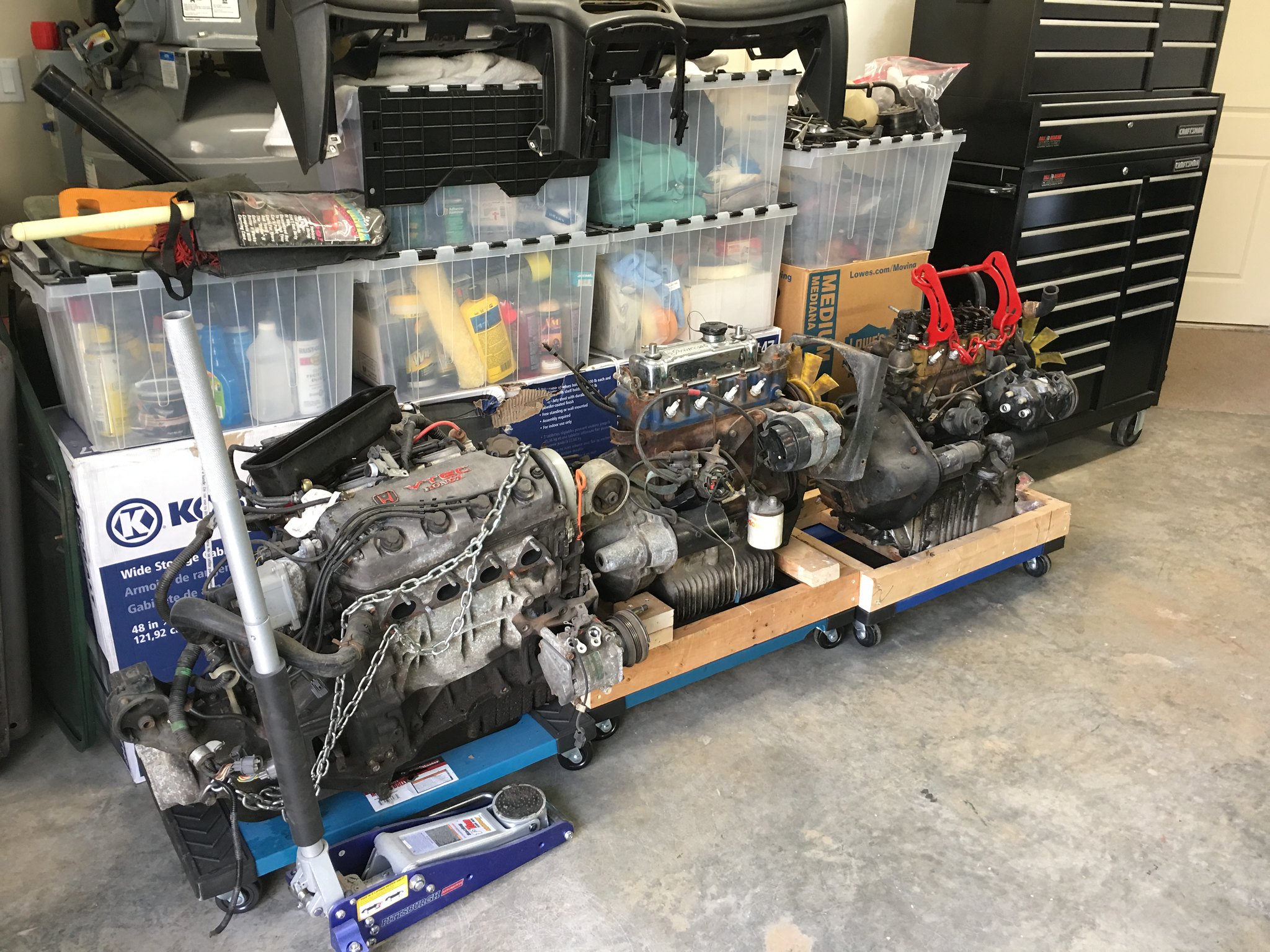 No!... Don't sell the '79 Mini. It looks so good and like you said it's completely original. Rather get rid of the extra spares that you've accumulated and perhaps don't need.

No!... Don't sell the '79 Mini. It looks so good and like you said it's completely original. Rather get rid of the extra spares that you've accumulated and perhaps don't need.

I will be selling the 2 A series engines and the Honda D16y8 is going in the van so that will open up some room. My wife is suggesting I keep the '79 as well but maybe rent a storage unit for it or the '91. Decisions, decisions.

.....My wife is suggesting I keep the '79 as well but maybe rent a storage unit for it or the '91. Decisions, decisions.

Has anyone else had difficulty in getting a response from M-Machine via email? I sent them an inquiry regarding shipping costs to the States for a large order of their panels. That was a week ago and so far, radio silence.

I was hoping to order an assortment of panels from them direct but if they can't even answer an email promptly, I can only imagine how long it would take them to prepare the order to ship. Might go back to plan A and order mostly Heritage panels through MiniSport.

3 user(s) are reading this topic