A little bit of time this evening and a little more progress. 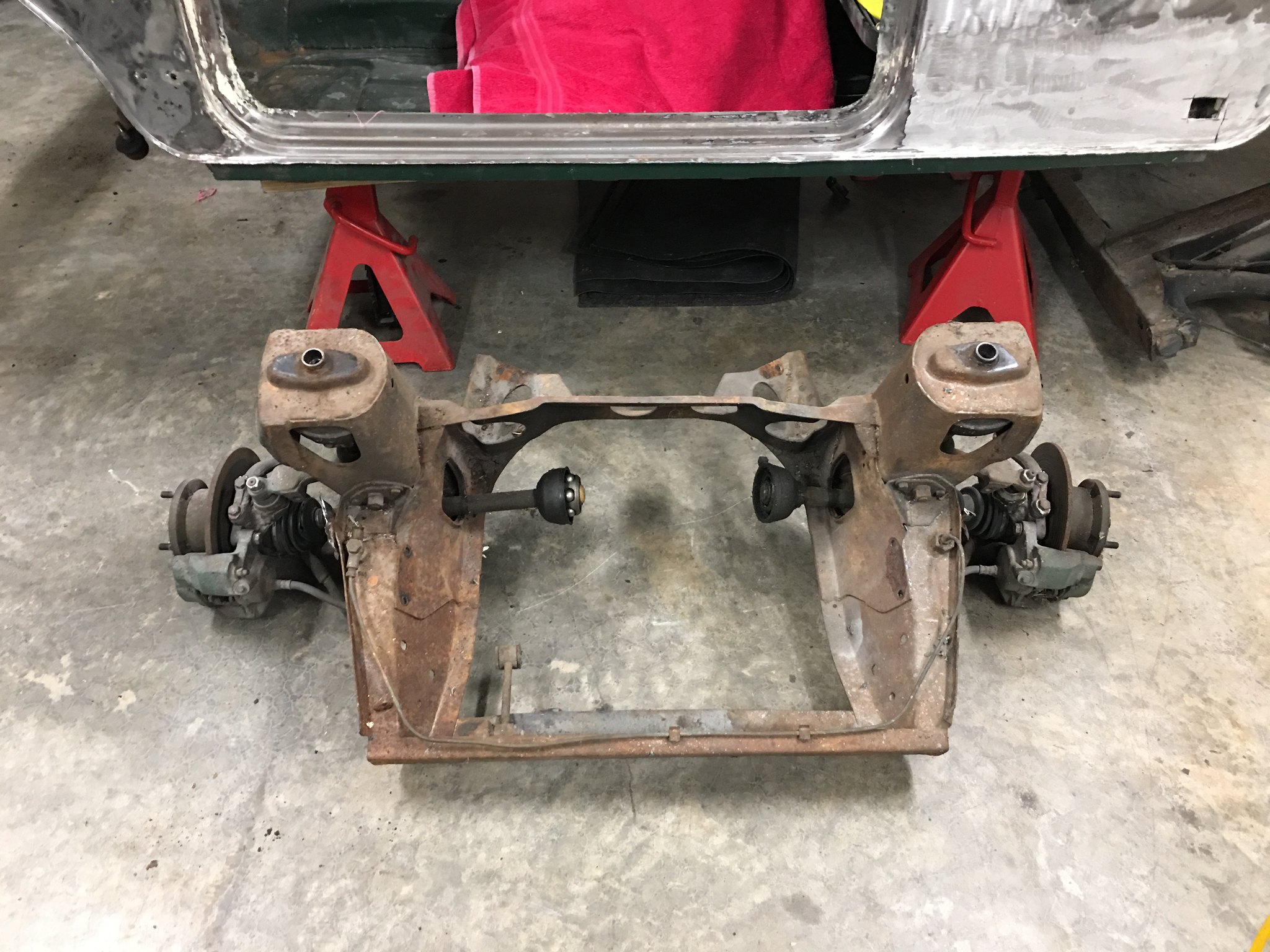 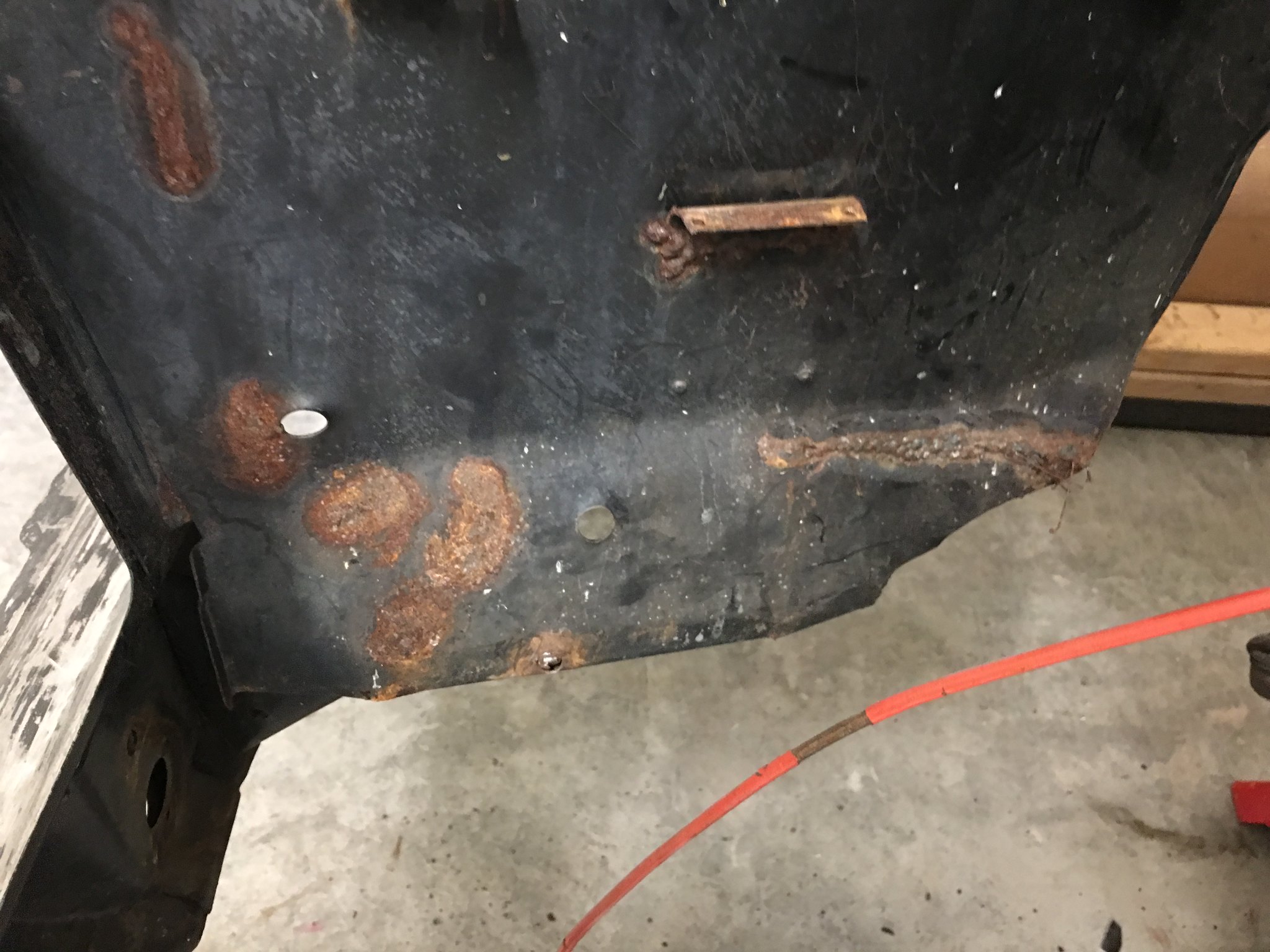 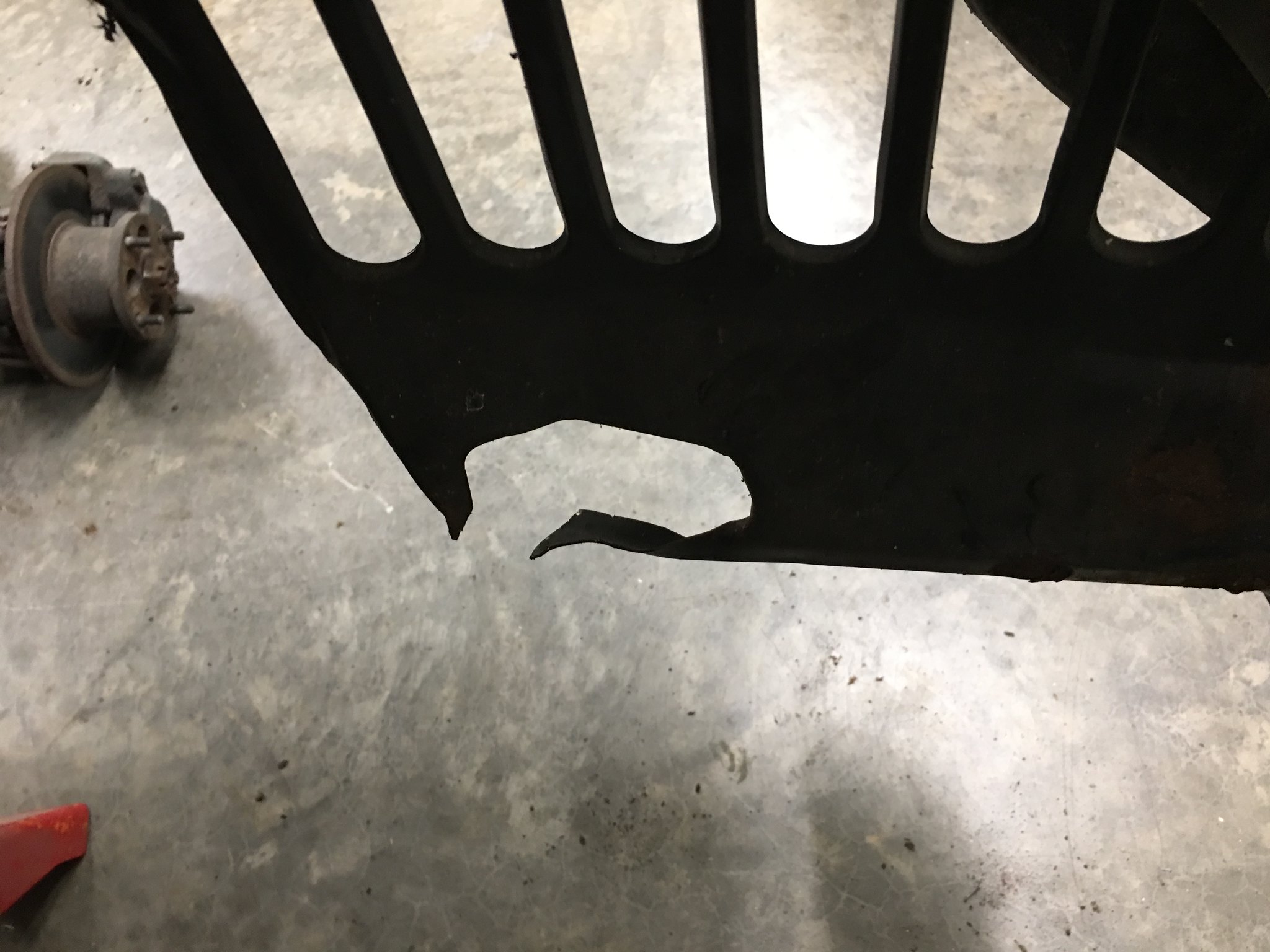 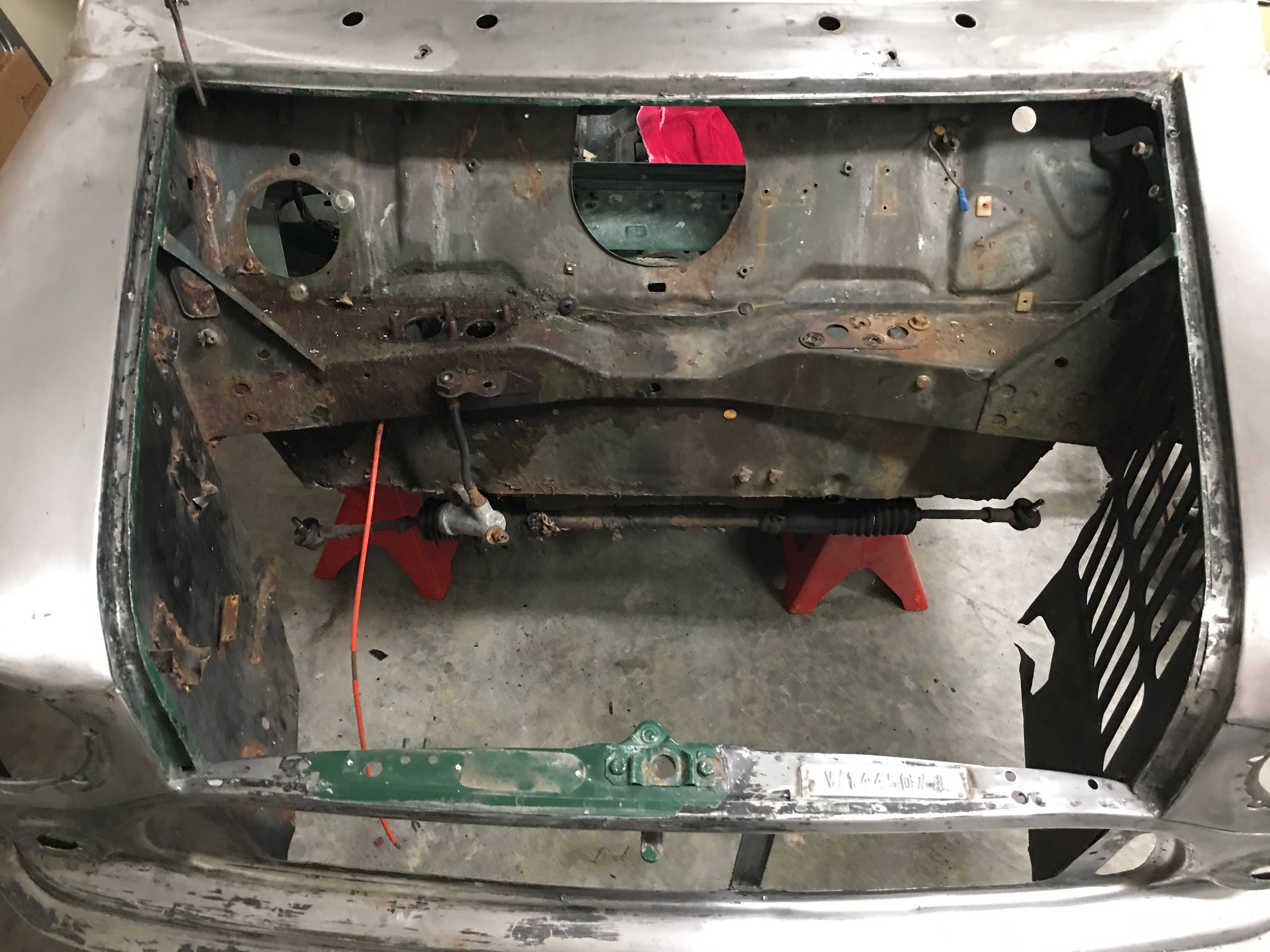 welding the inner wing to the subframe.. that's a new one on me...  love the progress..

Front subframe disassembled and parts loaded into a storage container to keep things organized. Unfortunately, most of these grimy, crusty bits are being replaced with new parts so I suppose I'll just close the lid on this and keep them for future use. 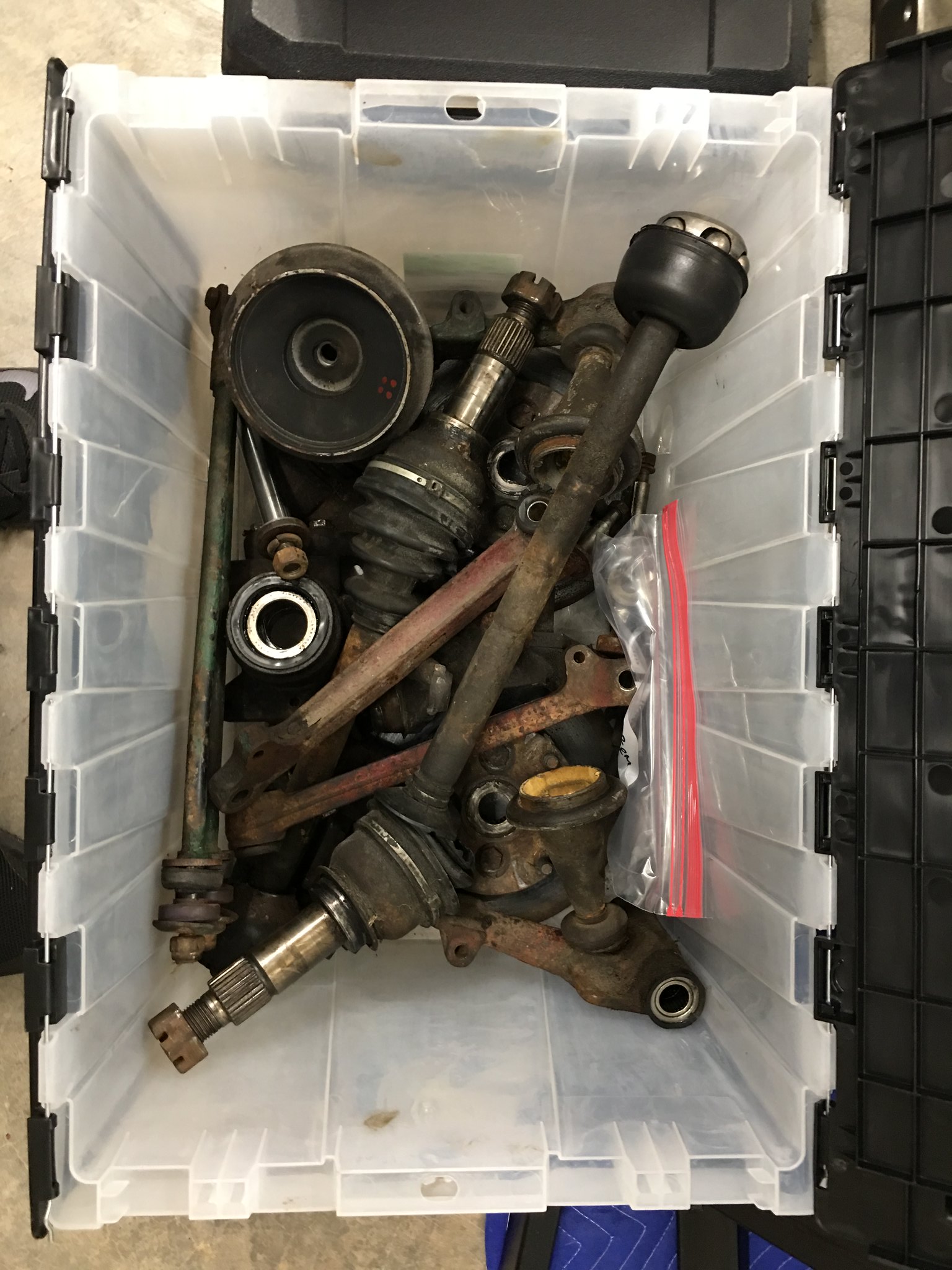 The removal of the wings was a mixture of careful cutting and outright hackery. The wings and front panel were replacement panels and in very good condition however in the past someone welded the wings to the scuttle panel. That combined with the bubblegum welds holding on the inner wings meant that a lot of cutting would be involved and much of it not very pretty.

Since the scuttle panel is going to be replaced, I cut into the corners. The underlying closing panels had been crudely tacked into place but welded solidly enough in some areas to hold water, debris and the wings. 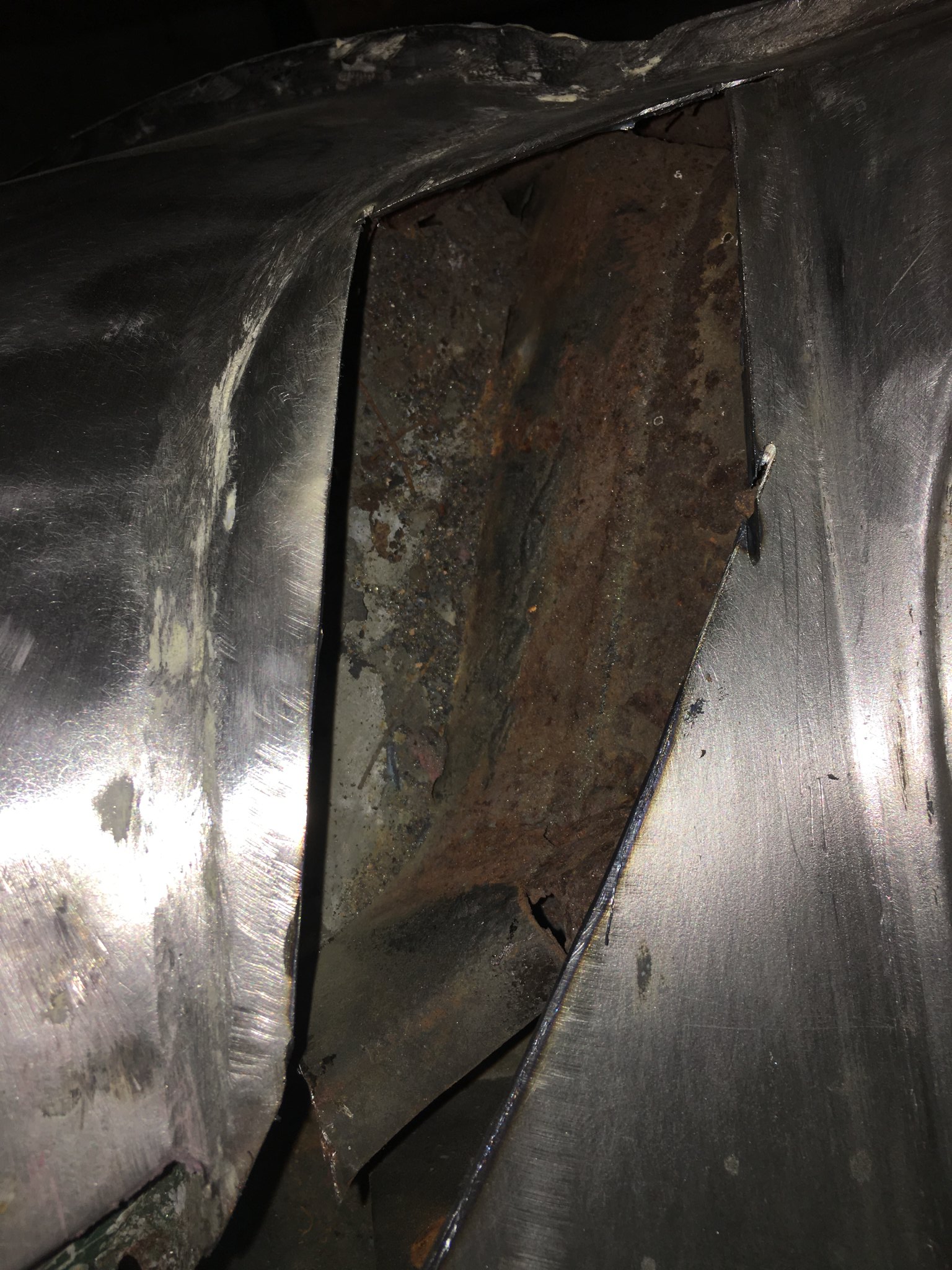 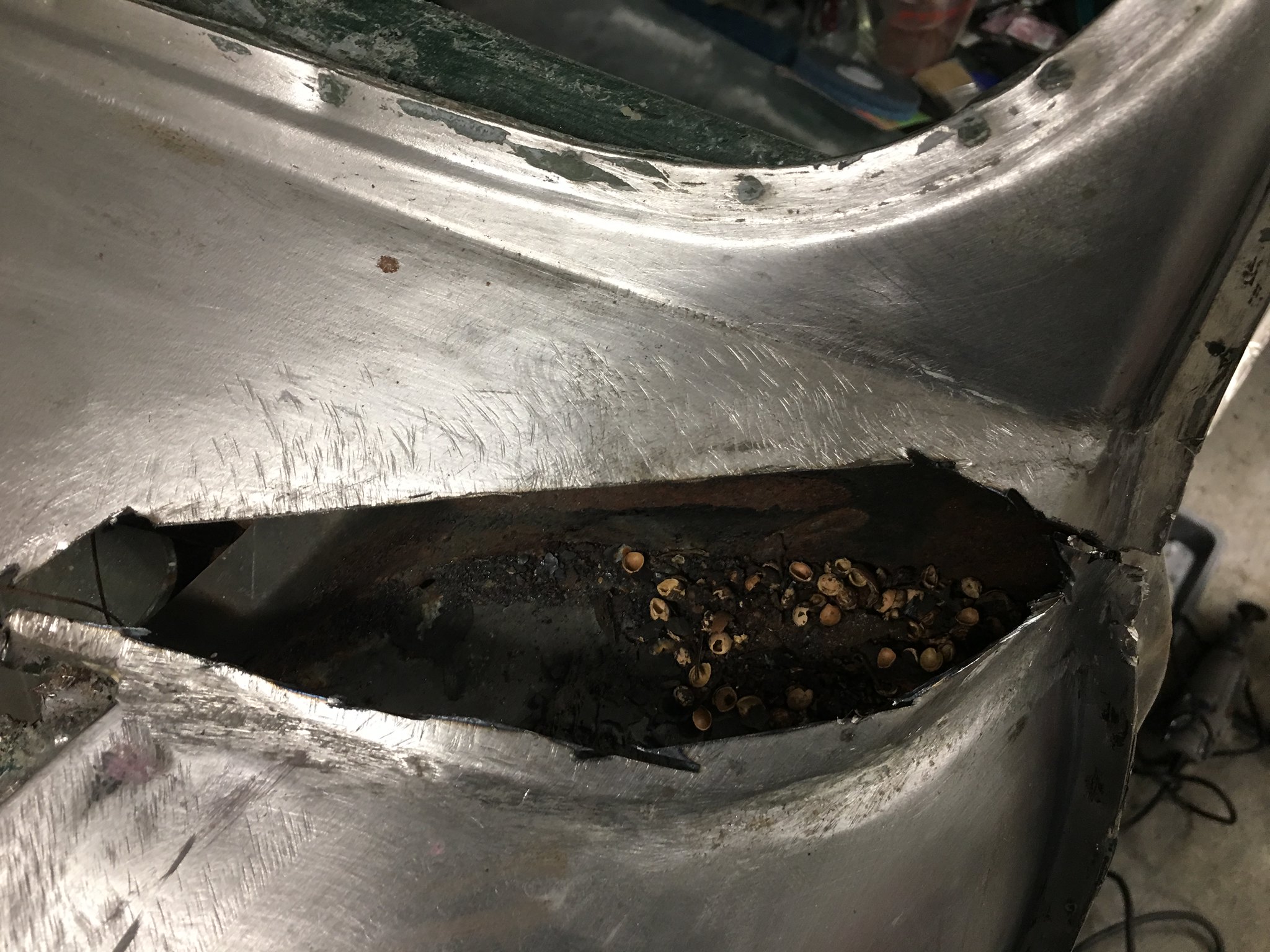 The inner wings were cut away ahead of the bulkhead and not just because they were a dented, welded, rusty mess...the new subframe and Honda engine requires more room and custom inner wings will be fabricated at a later date. 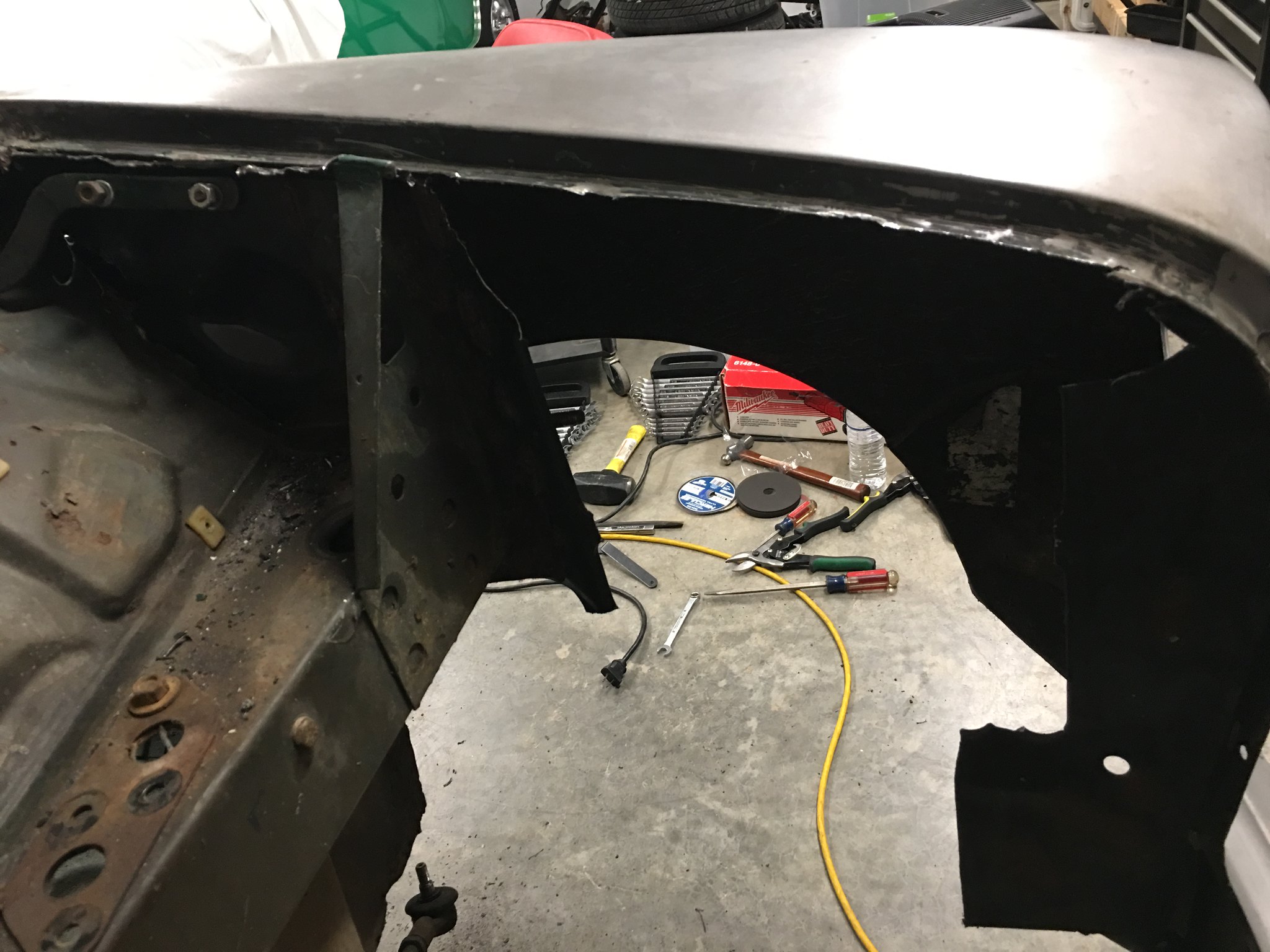 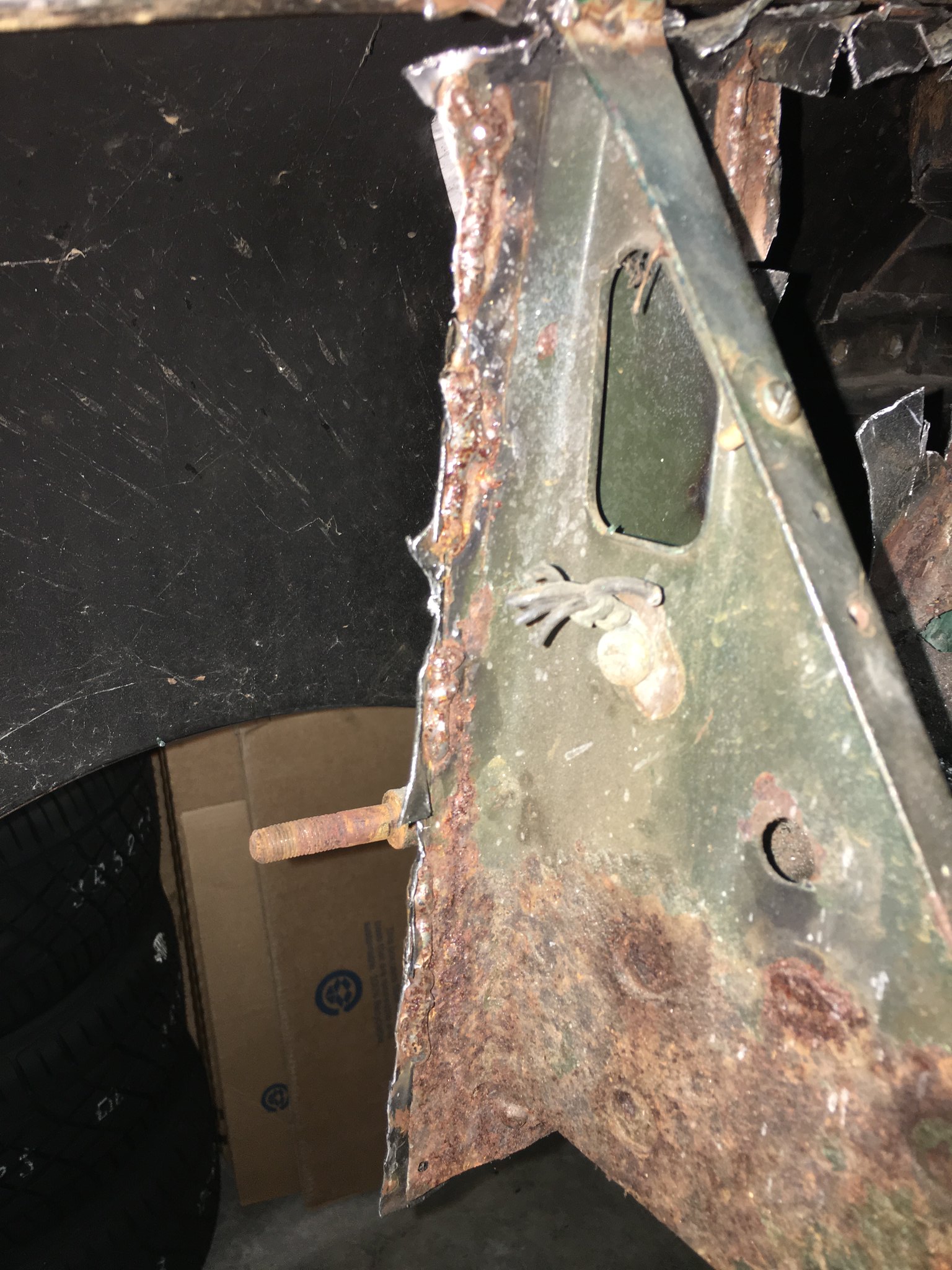 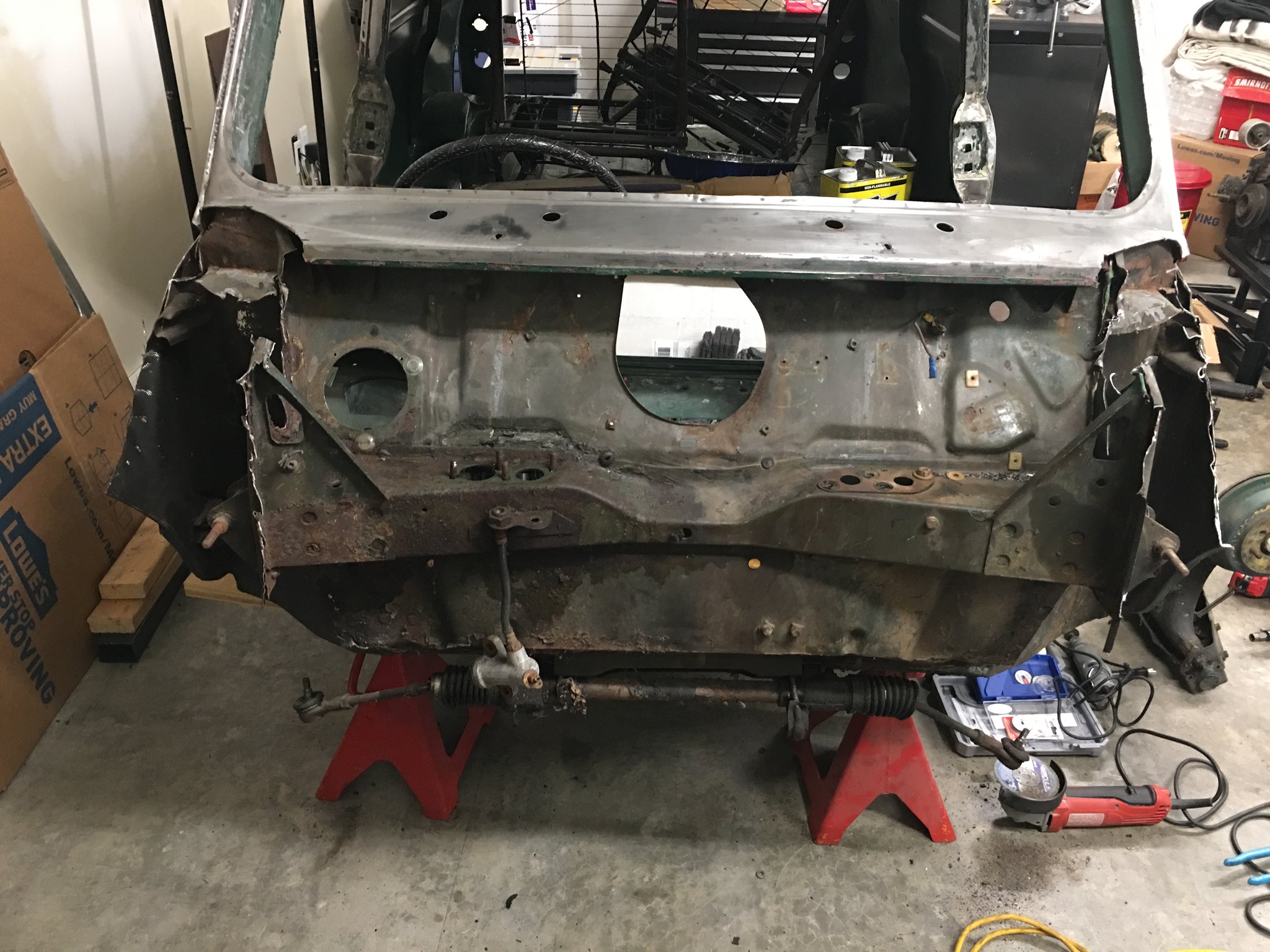 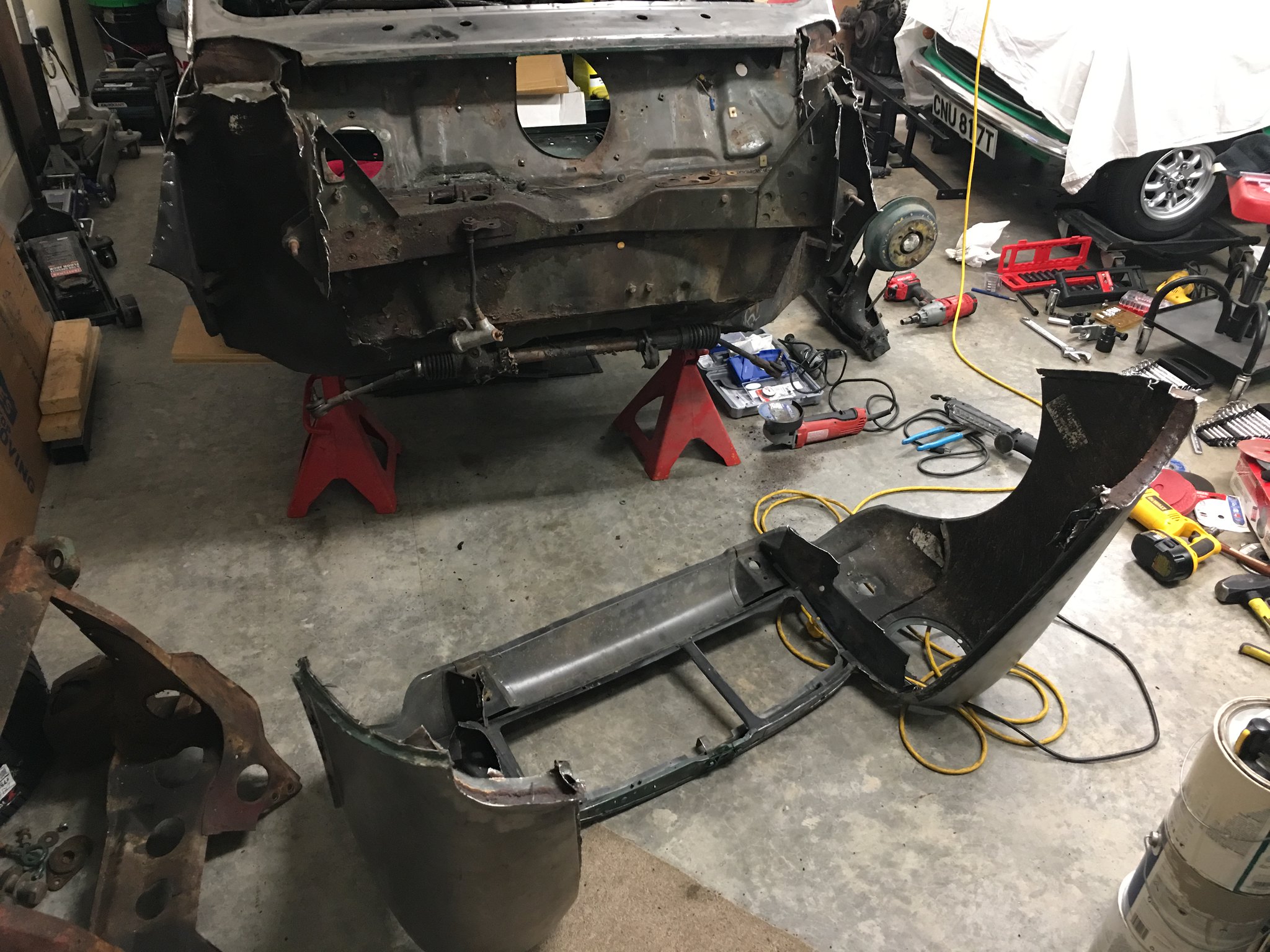 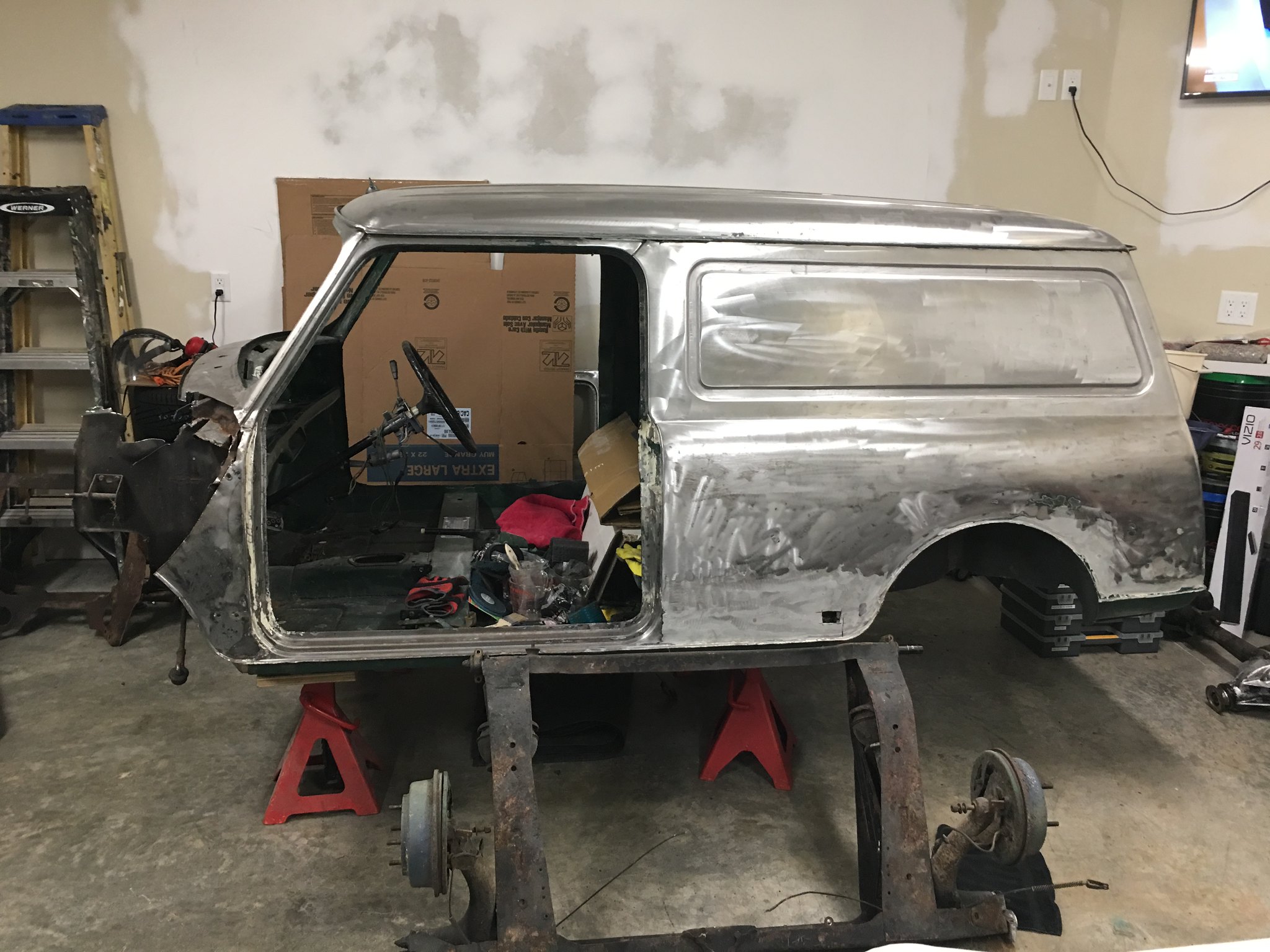 The remnants of the inner wings are next on the list of bits to cut away. They may not look that bad and in fact they are mostly rust-free, however the Frankenstein patches, warped sections and bubblegum welds all add up to a mess that is better replaced with some fresh panels. I know that they wouldn't be seen but I'd know that hackery was there . 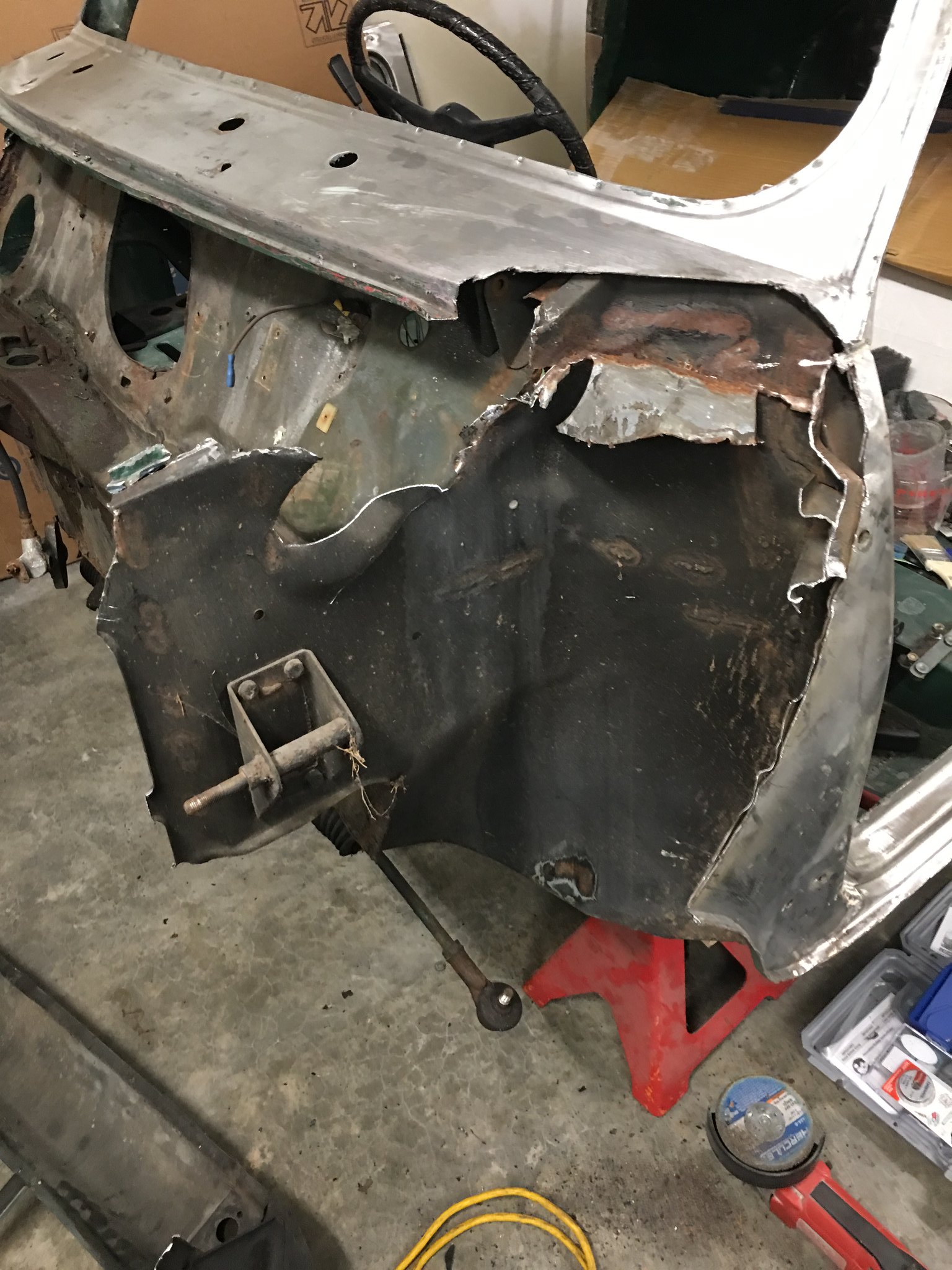 before you pack away the old parts, might be worth checking the state of the suspension knuckle boots - if they're not split or perished consider re-using them.  the new boots seem liable to perish in a very short space of time

before you pack away the old parts, might be worth checking the state of the suspension knuckle boots - if they're not split or perished consider re-using them.  the new boots seem liable to perish in a very short space of time


There was only one left and it’s split in two. I’ve placed a rather large order with MiniSport that includes everything for 2 complete front suspensions (one for the van and one for my ‘91 saloon). Soon, I’ll be swimming in suspension bits!

I started on the task of cutting away the snarly remains of the inner wings with a goal of assessing the condition of the bulkhead in mind. 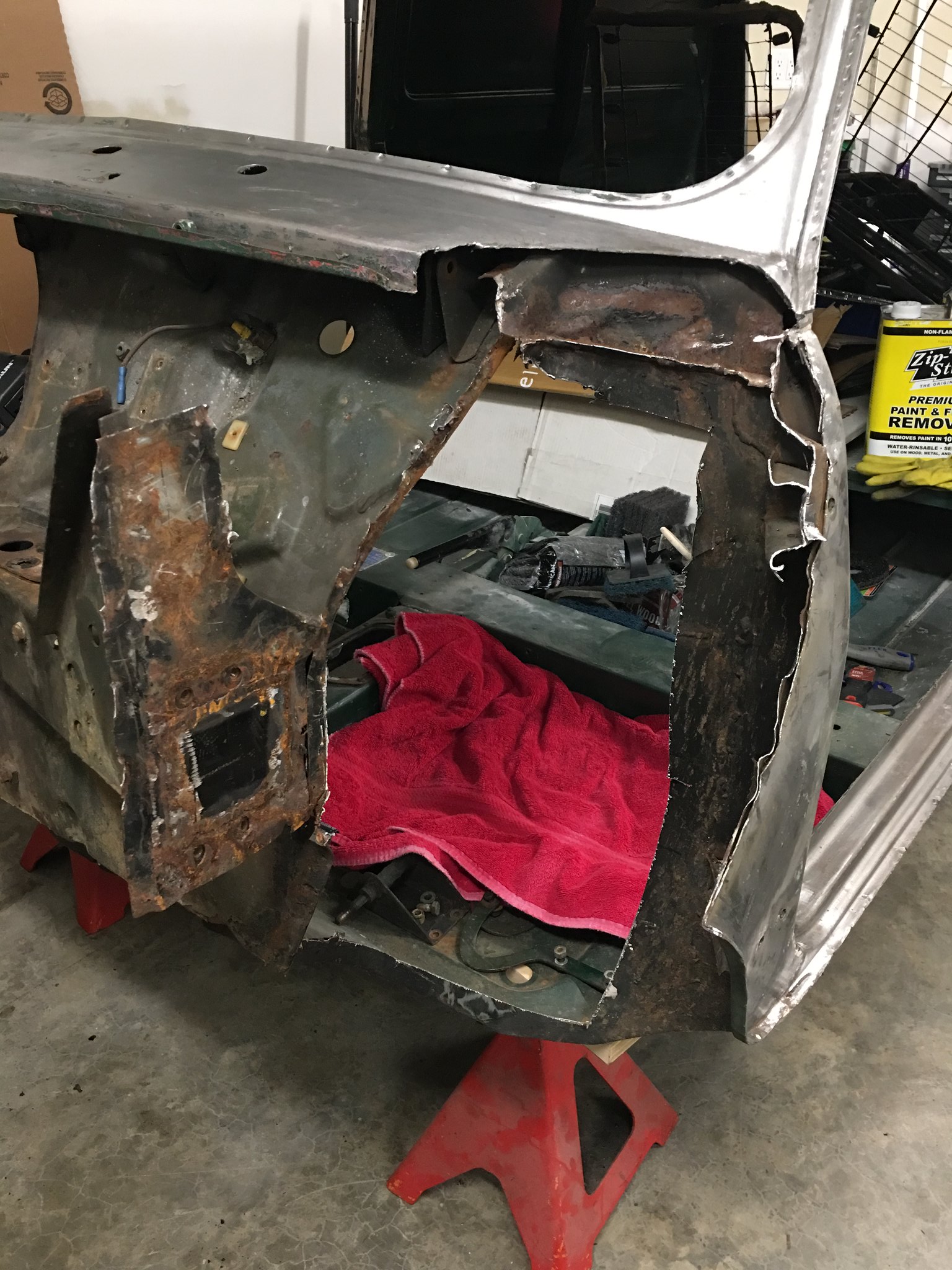 Its a start but the more I cut away, the more nastiness was revealed. 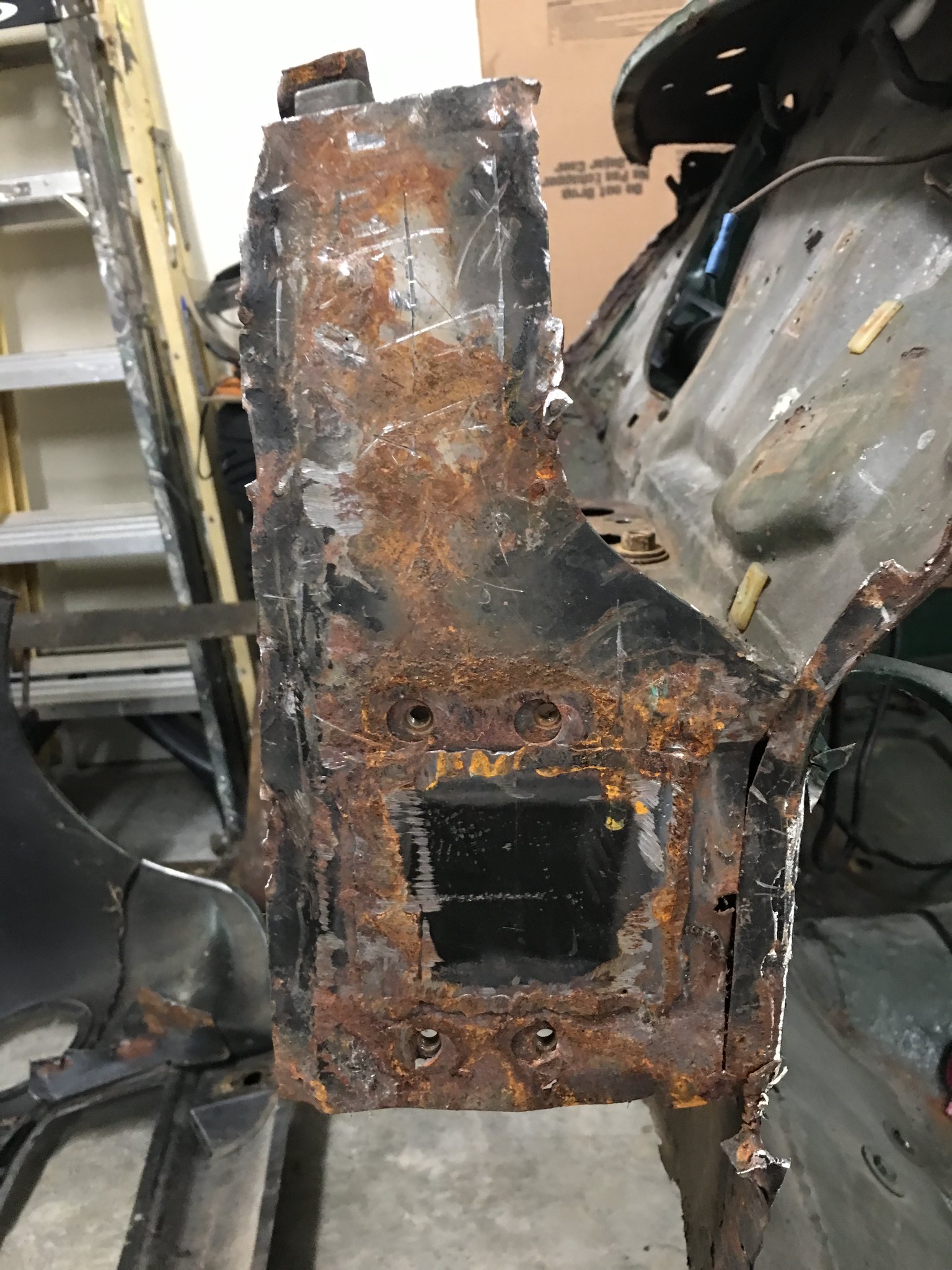 The installation of new inner wings some time in the Mini's past caused more harm than good. All of the welds are very poor quality and the placement and the size of the welds ruined the core panels. Giant gaps (1/4") in between panels were filled with some sort of caulking while other gaps were left to catch moisture and debris. The results are not too pretty. I haven't even started on the other side, which is arguably the worst of the two, but I've made the decision to purchase and install a completely new bulkhead assembly. There is no point is messing around with corroded pieces here and there or hidden rot which would reveal itself at a later date.

Meanwhile, the inside is looking a little more open after removing the pedal box, steering column and portions of the dash. 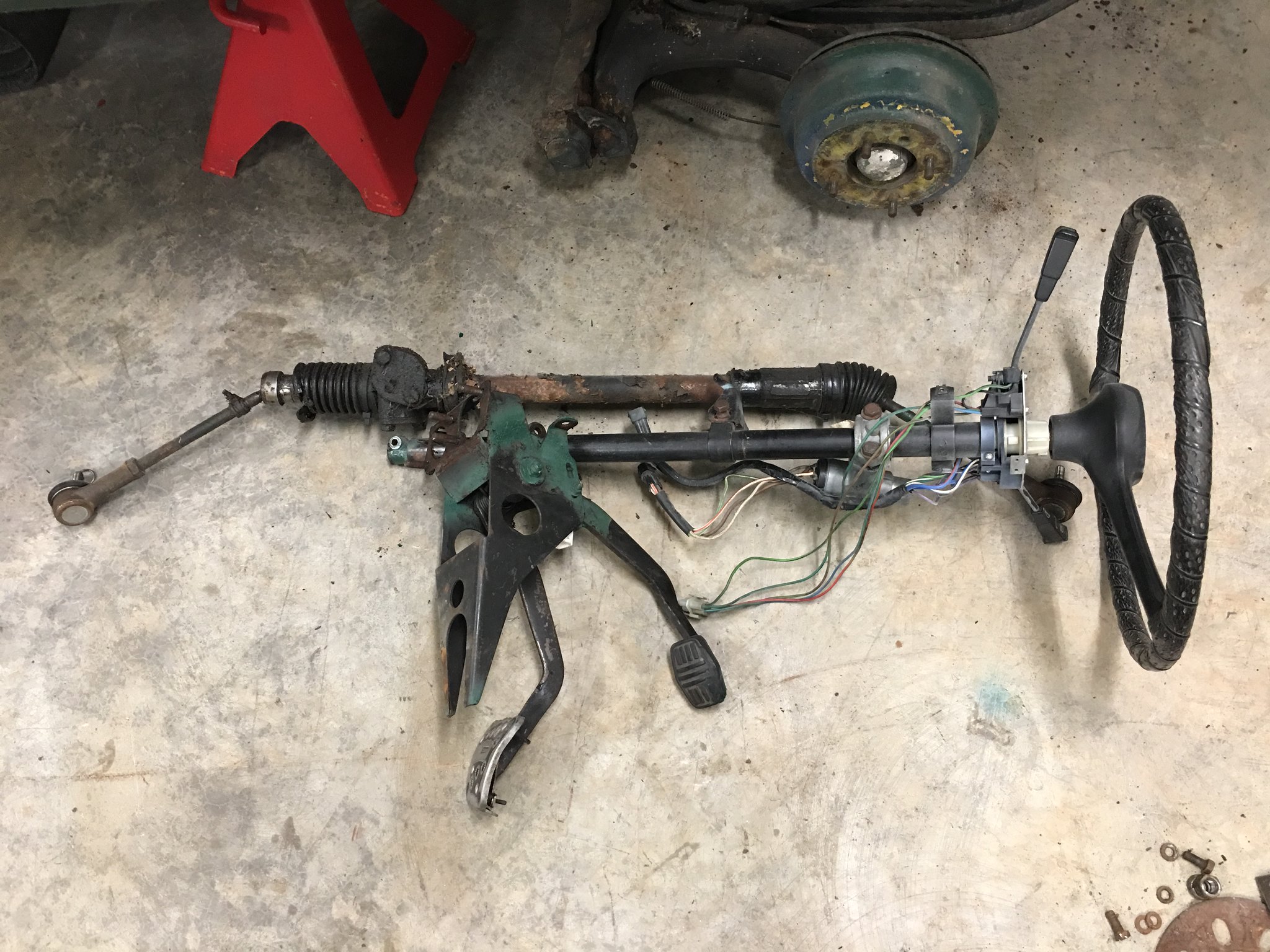 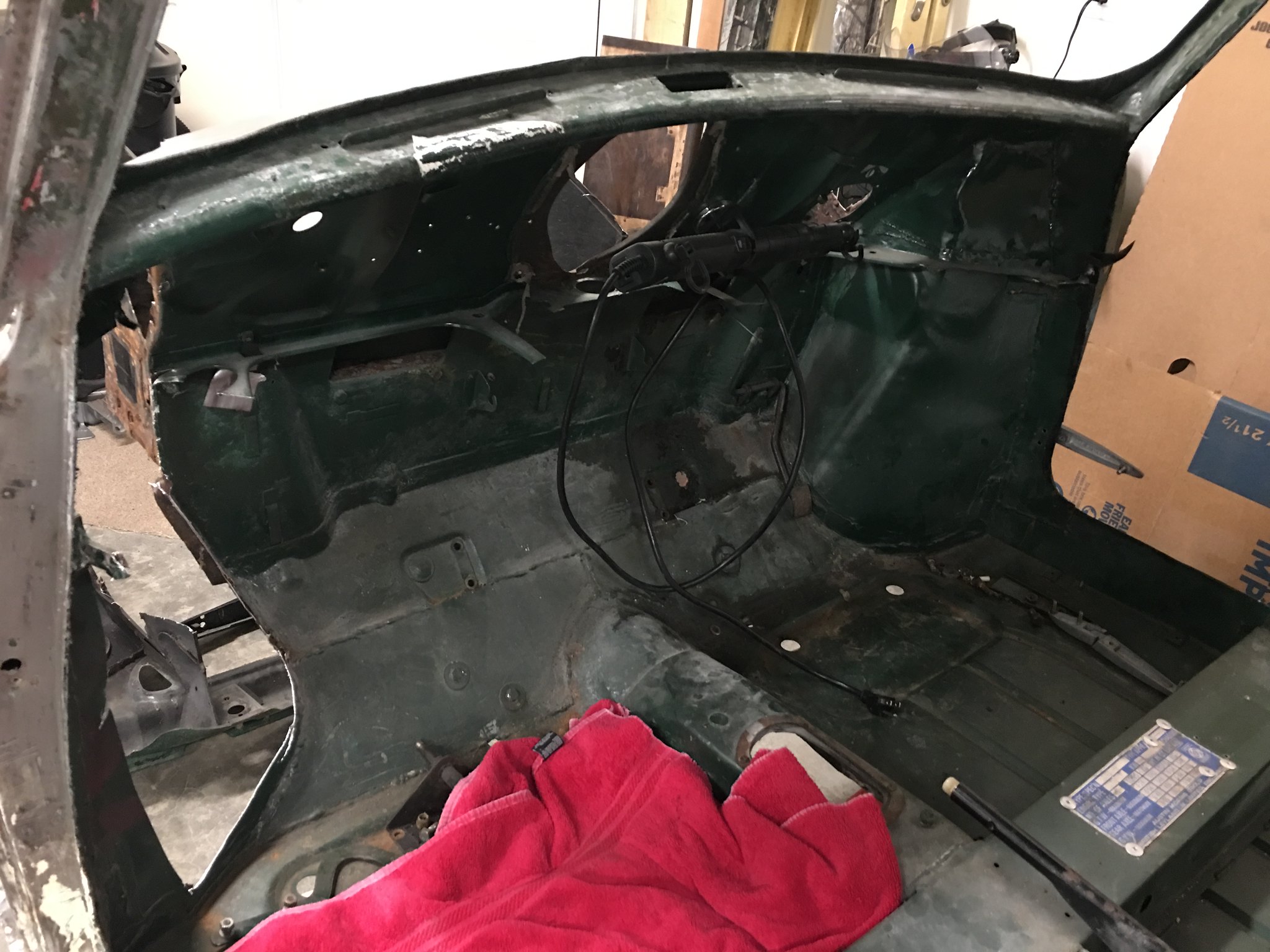 The stock Mini dash design is being trashed in favor of a new design which will still respect the lines of the car but also bring in a competition inspired style. More on that later...

Slow but progress none the less...

This past Saturday I made a trip over to nearby Tennessee to visit with Spencer, collector of all things Mini and the previous owner of the van. I had called him looking for a better rear subframe than the crusty, flaky unit I removed from the van. Since it's a structural component, I didn't want to deal with something that had been compromised by years of oxidation.

Fortunately, he had several units on hand as well as the trailing arms. A deal was made for one of them and I loaded up my goodies and headed back to the mountains.

The condition is really quite good...no rust at all and only a few little dents. 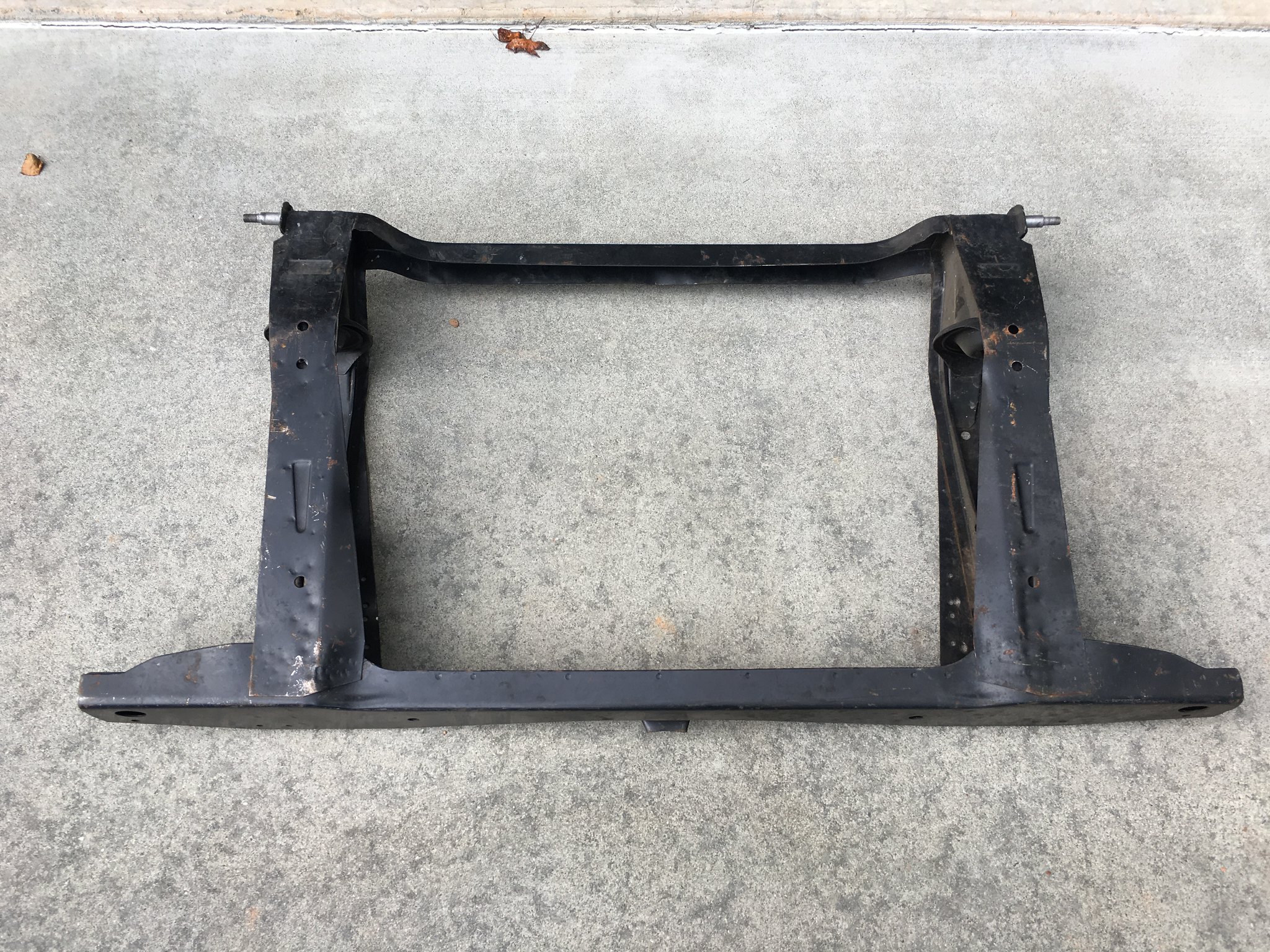 In the meantime, MiniSport is gathering up all of the parts for the rather large order I placed a couple of weeks ago. Hopefully everything arrives sometime in the next month or so.

Big step forward. Loaded up the van shell, front wings, bonnet, subframes, seat frames, side and cargo doors - headed off to the blasters to get everything (inside and out) down to clean steel. Can't wait to get it back in the shop. 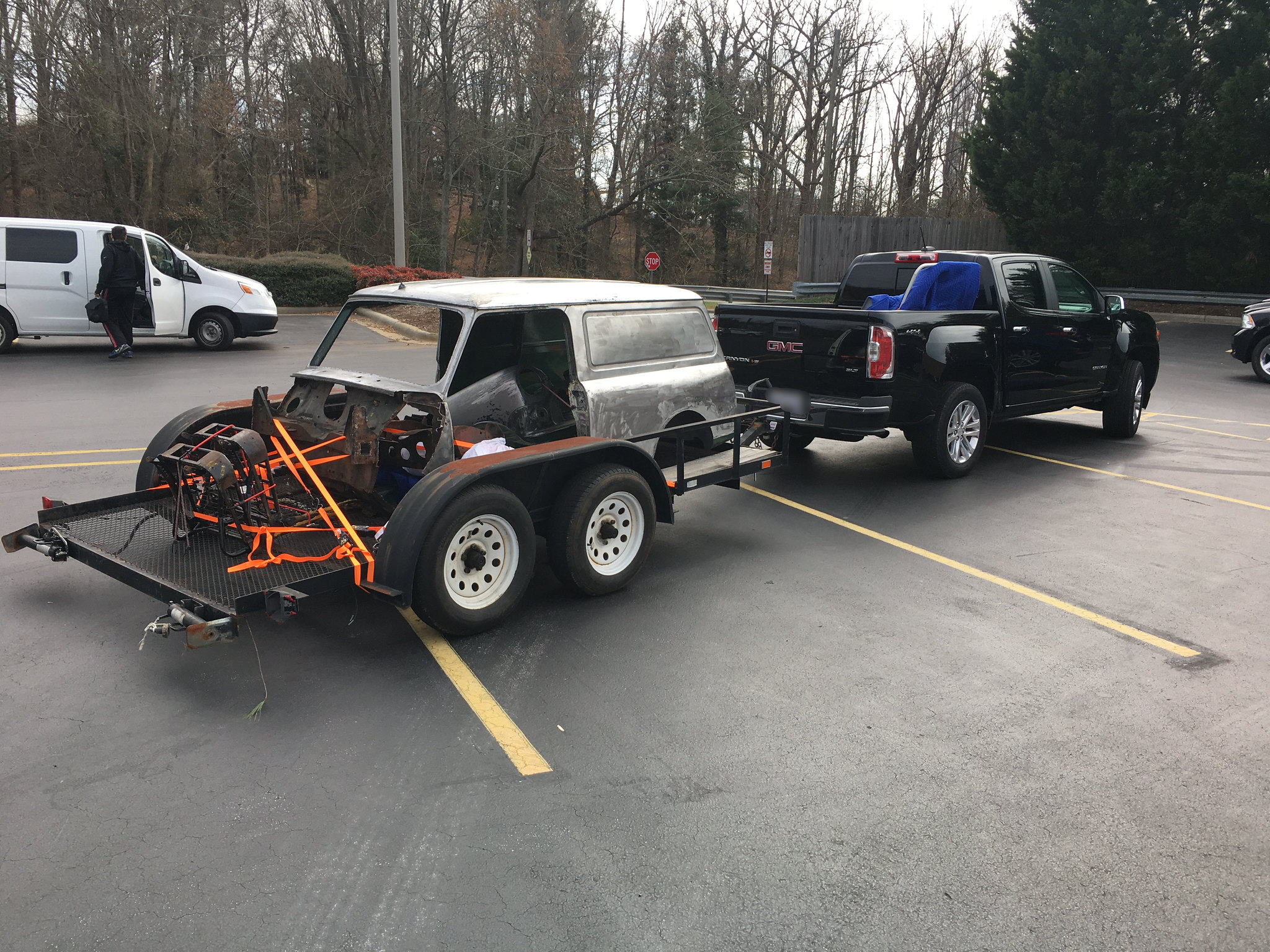 With the van out of the garage for the time being, I set about bringing some order to the space. A couple of warehouse racks and some bins were put to use to store all of the new parts (and a few used) for the van, the '91 saloon and the '69 Sprite projects. 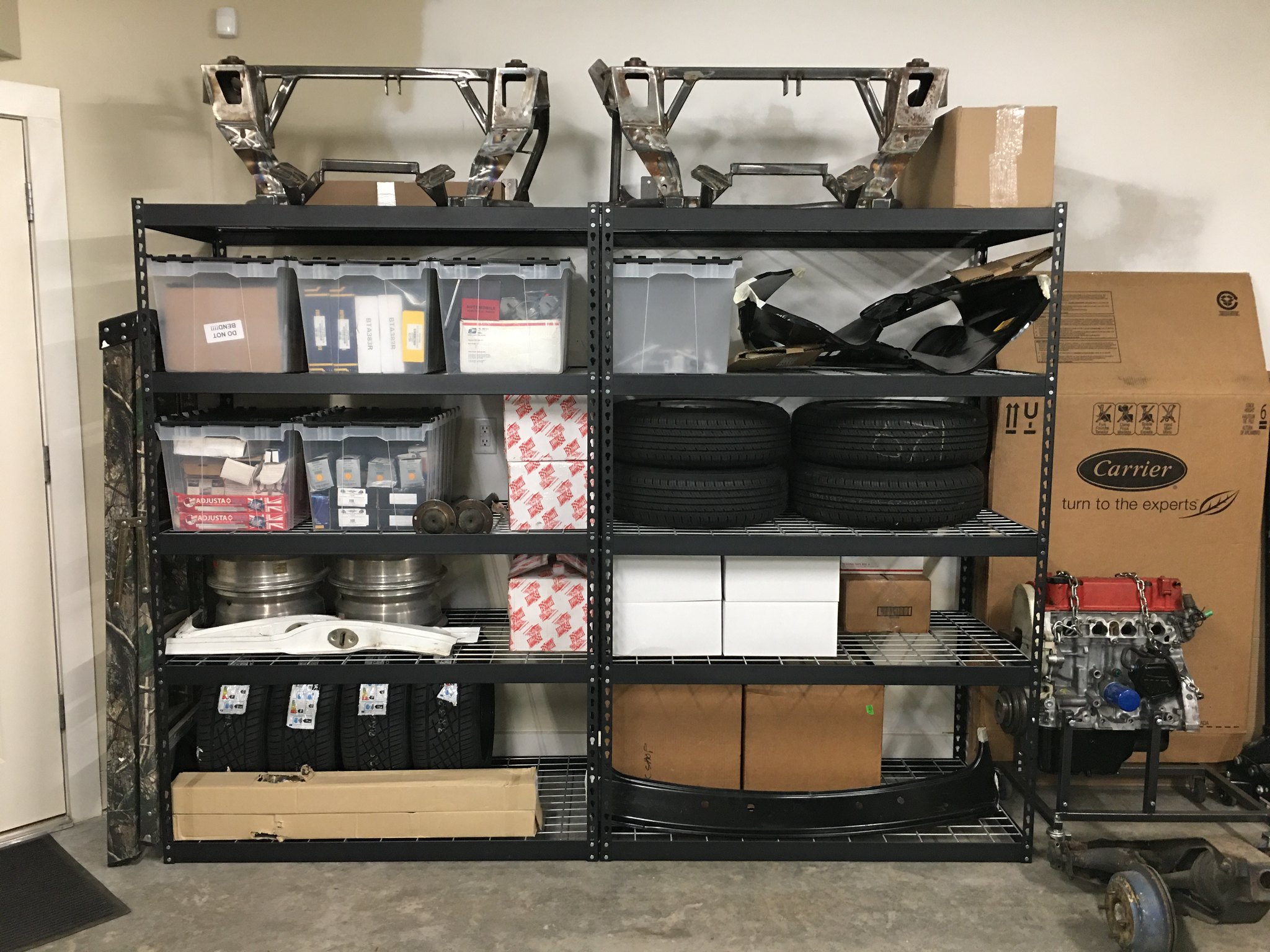 I don't have a date for pickup yet from the blaster but I'm not too concerned. Currently, I'm working on the rehab of the Sprite's rear differential and brake system. I also need to make some additional room by selling the '79. I've really enjoyed driving it around this past Fall but as much as I would like to keep it, I just don't have the room.