Right, I keep getting asked if I've got a build thread for my mini and I keep saying no. So I thought I'd start one! 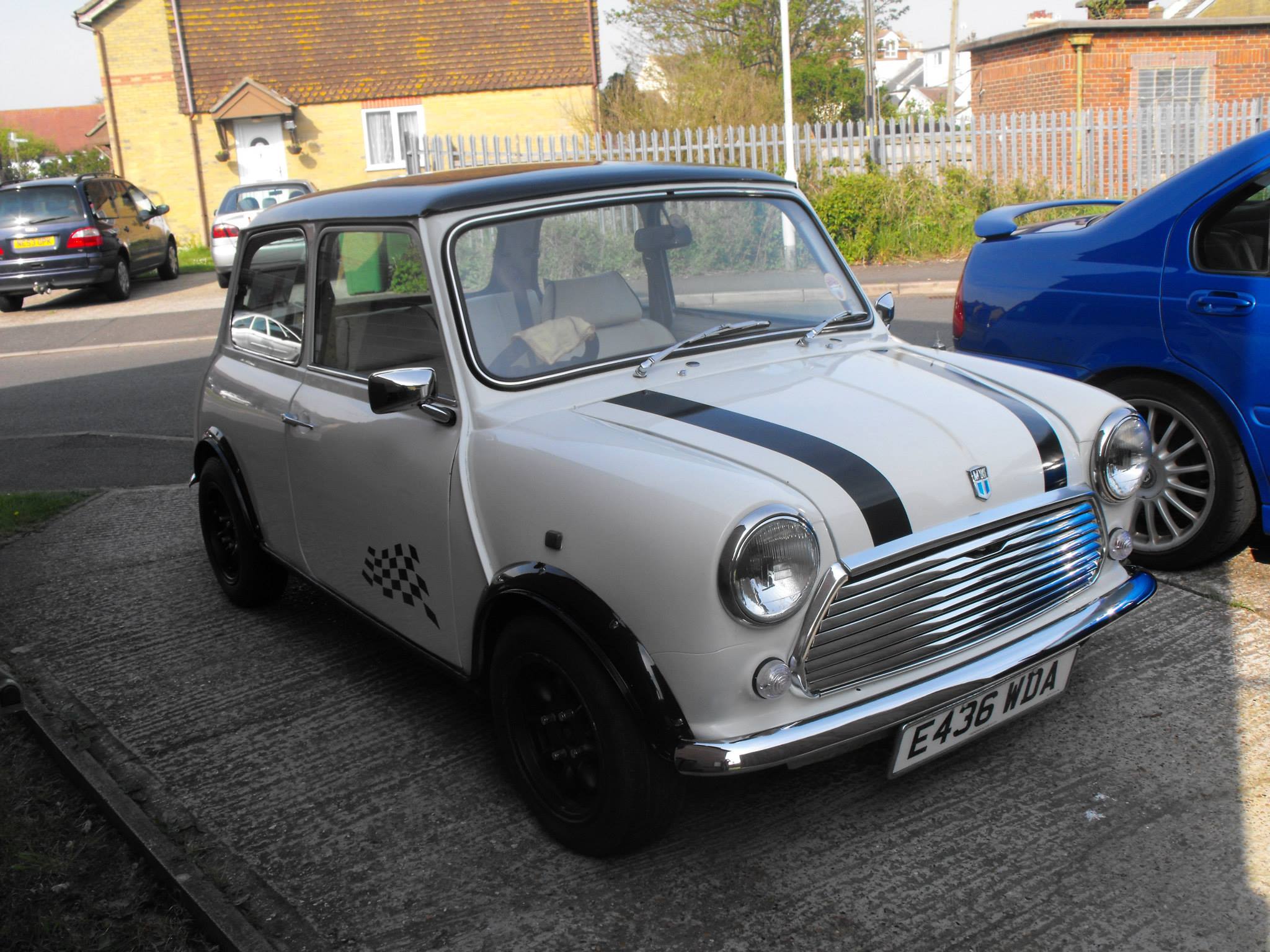 I got this car not long after I passed my driving test back in August 2015, it was a little rough around the edges, it had apparently just undergone a restoration, but after about a year of daily driving it, it quite obviously just had a quick spray job and put back together.

The doorsteps started to show signs of rusting, so I had them as well as the entire floor either side of the tunnel replaced just to get it road worthy again. But about another 6 months later it started to show more signs of rust, it was at this stage I decided to take it off the road to get all the bodywork sorted out. So for about a year I took the bus to work and college, saving every penny I could to get the bodywork done.

It went off to Lee McNair Motorsport in ashford to have all the bodywork done, the shell was blasted to uncover all the bad repairwork and rot, and there was a lot of it! It's had so much work done I struggle to remember what it's had done now, I usually say to people it's easier to say what still original on it!

As far as I can remember it has had :

Entire boot floor plus battery box
Rear valance plus closing plates
Rear panel up to the botton of the rear screen
Rear arches have been tubbed
Full length floors either side of the tunnel
Cross member (twice, I'll get to that after this)
Quarter panels
Door steps
Complete A posts
Front roof corners repaired
Front windscreen panel
Complete inner wings, then trimmed back to bulkhead cross member
Blukhead cross member
Scuttle panel
Next panel to be replaced is the top dash rail.

It was whilst all the bodywork was being done I decided I wanted to really build this car into what I really want, and that's an all out track day car. The idea has been changing and evolving over the past 4 years, from what engine it'll have, to what panels need to be changed due to me not being happy with them, and also re doing stuff that I had done because I wasn't happy with the quality, mainly due to lack of welding experience, but after several years my welding has gotten better, allowing me to go back and make a neater job.

So I said about the cross member in the list above being done twice. When the floors were done, the cross member was also replaced, but it weas laster discovered that the floors wernt painted in the section under the cross member, this is because they were supplied bare metal from m machine. So after 6 months they had got a nice layer of surface rust on them, which I wasn't happy about leaving, nor just spraying some cavity paint in there. But this was an ideal oppertunity to replace it, clean the floor up, and do the modified cross member after I had recently discovered dimple dies. Here's a few pictures of what I found, and what I've done. I now plan on doing dimple dies in a few other places, like the top dash rail which I said I was replacing. 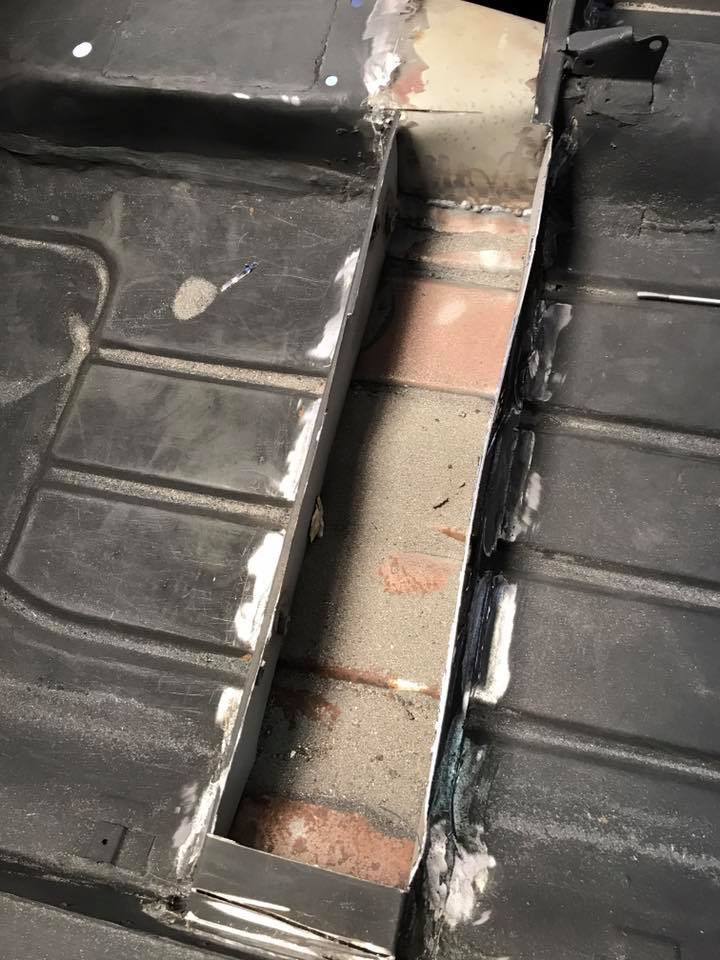 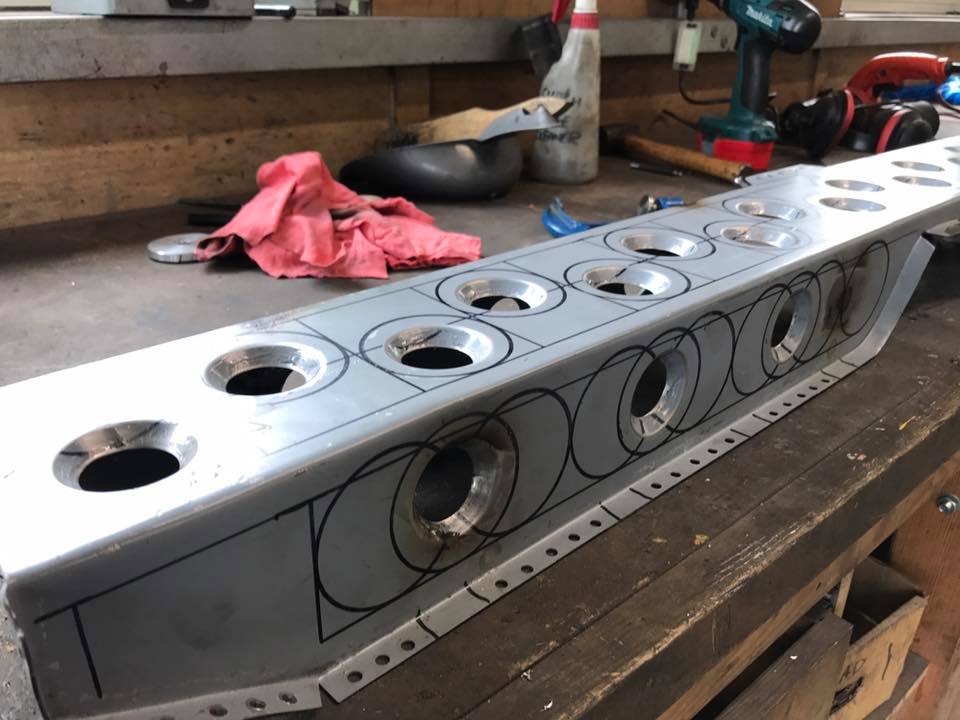 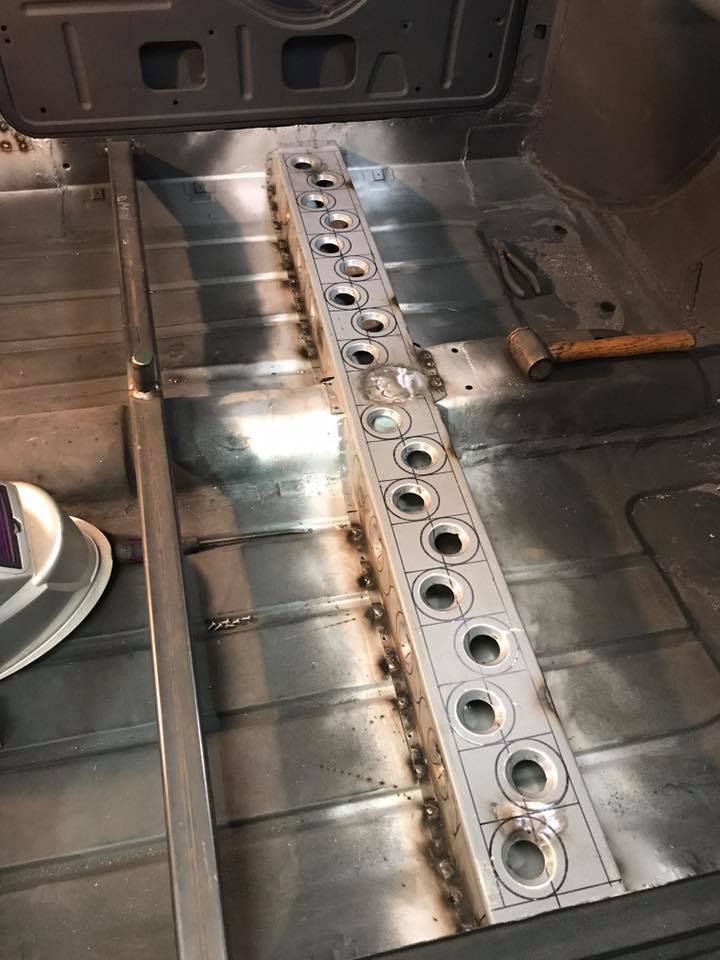 Here's a few pictures of it during the bodywork stage and after. 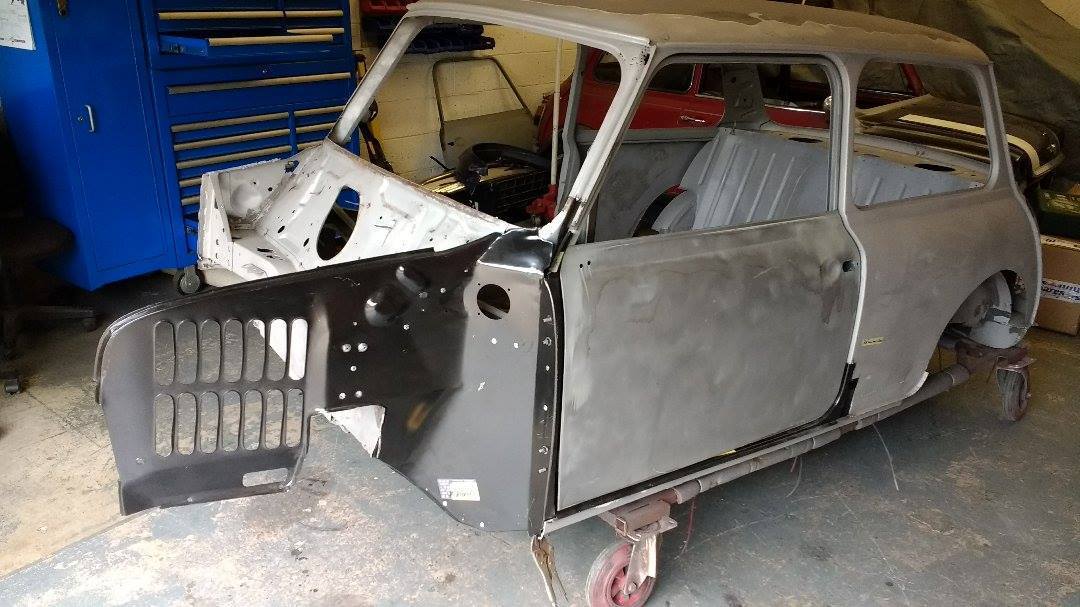 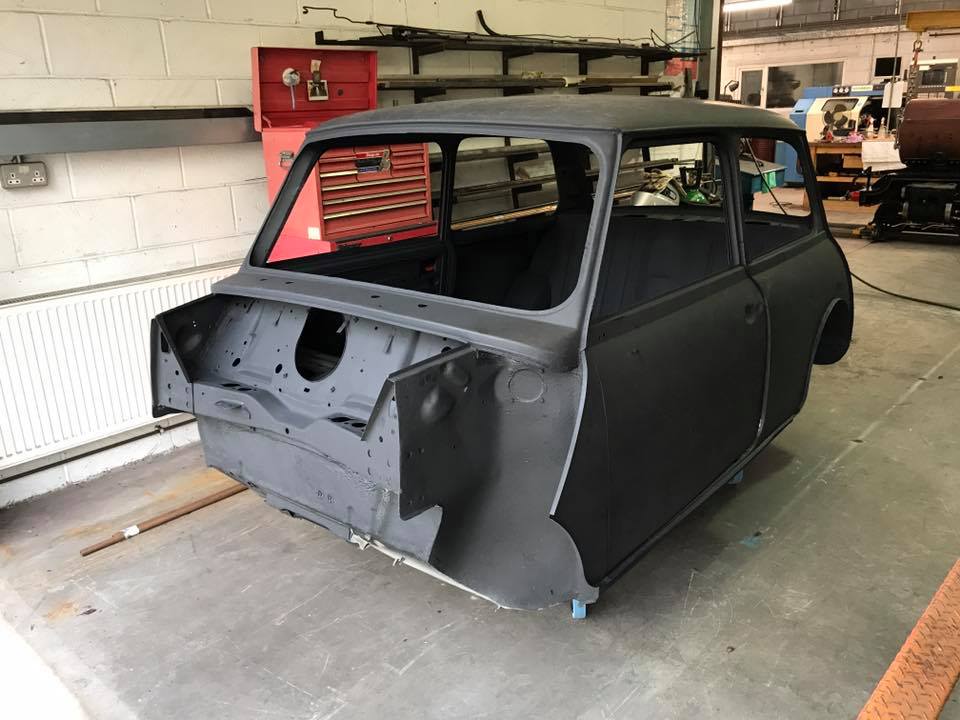 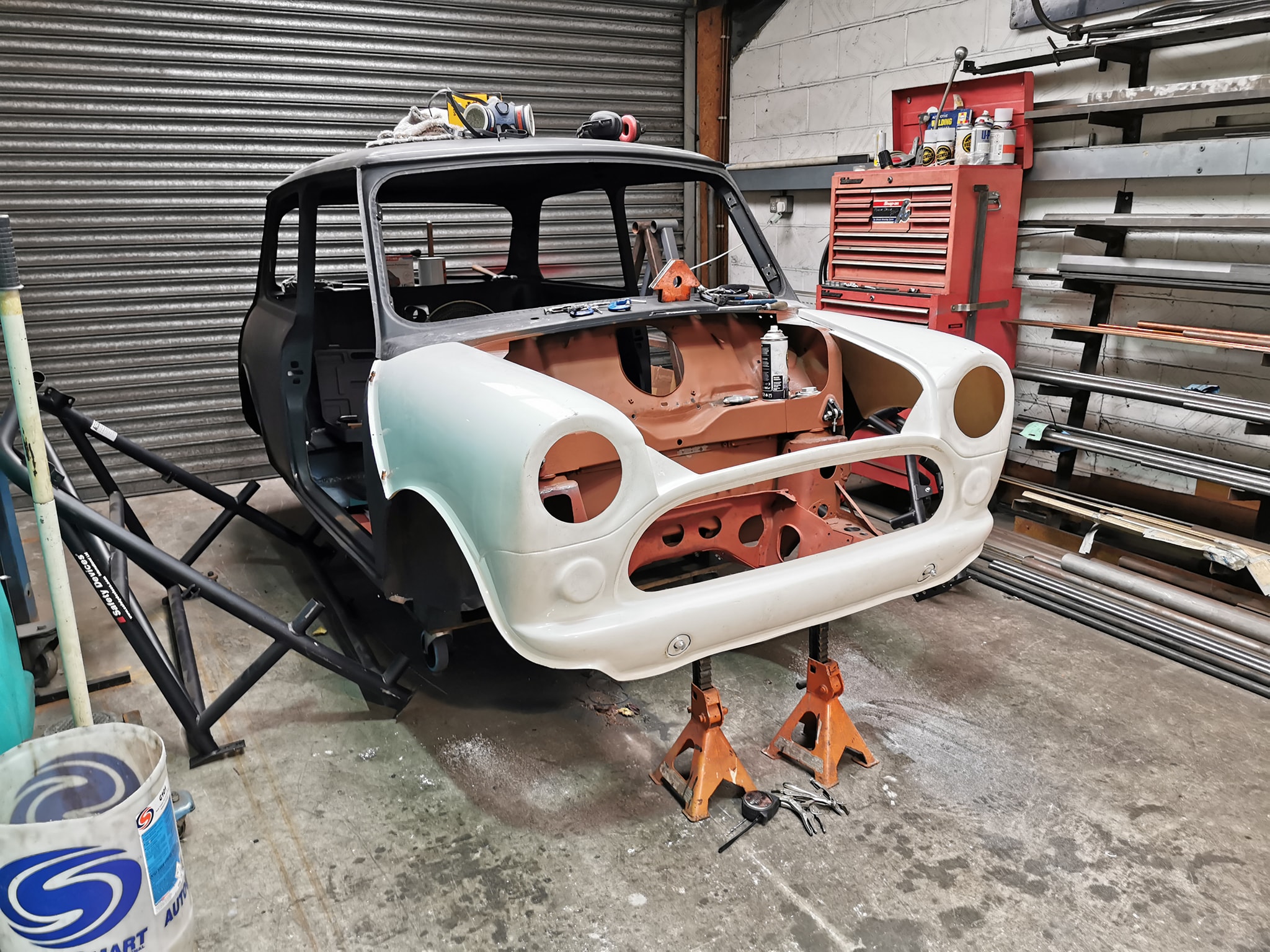 It's current state is the front subframe is currently fitted, empty engine hanging in, fibreglass front end fitted, and carbon bonnet has been roughly fitted but needs adjusting.

As I said in the beginning, the idea and goal posts have been constantly changing, but I'm pretty settled on it being as close to a miglia mini as possible, as far as how it looks, even down to the fine details such as the inner wing to scuttle panel being radiused rather than the generic inner wing being cut off where the wing to cross member gusset is. 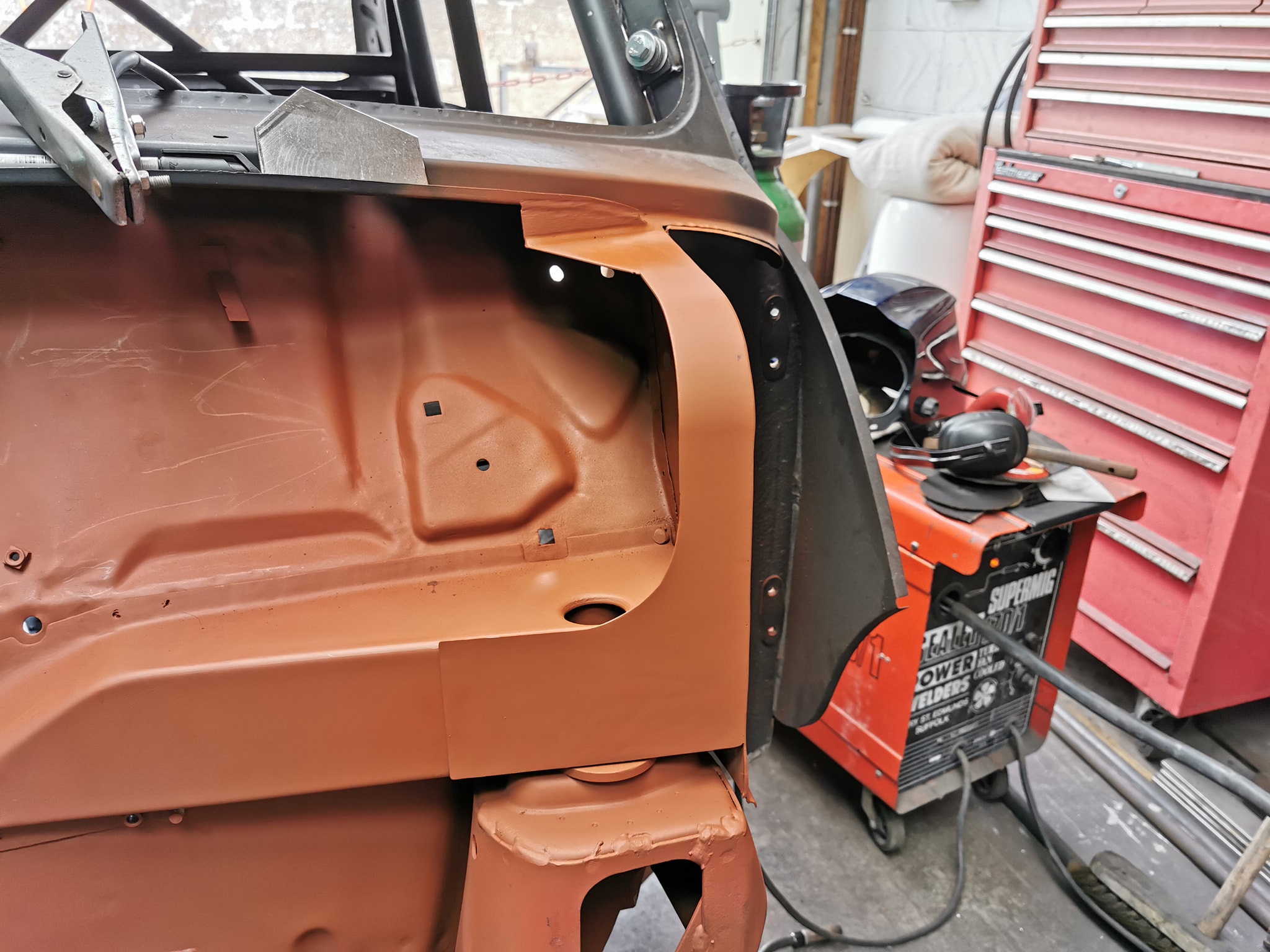 At the moment I'm undecided wether to change the actual bulkhead panel for a flat sheet, or to leave it as it is. I plugged up all the holes in it, but trying to weld up all those little holes without the panel distorting was pretty hard! Although in primer it looks ok, I fear that when it goes into gloss it'll look pretty trash! As I said earlier, I'm aiming for a miglia spec/look mini, but one thing the migs have is an extremely large bulkhead box, but that is useless for me, why? Because I'm going twincam, and the inlet is at the front, so there's no real point in fabricating that huge bulkhead box.

Twincam I say? Yes! Originally I was going to build a beastly spec small bore engine using a bmw k1100 16v head, but after talking with several well know engine builders they said the power to cost would've been ridiculous. I got this idea from my dad, he was involved in the forming of KAD (Kent Auto Developments) Along with the help of my uncle, and my late grandad, a very talented design engineer called Gary, and 2 business men who wanted to bring this idea to life. Once kad got up and running one of the engines they build was a small bore engine, running a 16v twincam head, chain driven. Now this got me really buzzing to try and re-create something like this, just to be different and a head turner, but like I said, the costs would've been silly, so I decided to jump up to the big bore engine, 1293, with a bmw k1200rs engine, but trying to aim for the 160bhp mark. the more I thought about it and the history my family had with KAD, I thought it would be a shame to not go with a kad twincam, so the final decision was to go with a top spec 1380 twincam engine from KAD.

I also plan on using a lot of carbon as well! Carbon roof, front end, bonnet, bootlid, miglia arches, bumpers, doors, plus lots of other little bits and bobs! It's also running the most extensive bolt in cage you can get before going to a weld in cage. Originally I went for the bolt in cage because I knew I didn't have the skills and capabilities to weld a cage, but as the build has progressed I sort of regretted not getting a welded mig spec cage, as I've gotten to know more contacts and get more friendly with more businesses I could've sent it away to have the cage done to a proper certified spec. But that might be another idea to have done later on down the line once I've had a bit of fun with it and decide to rebuild it, as most people eventually do with their cars.

But for now I think that's enough, I could go on for quite a while, but I think I'll call it a day at the moment.

Looking forward to to this one, would love to build a serious racer. Good luck.

Looks like an excellent build! I'm doing something similar myself to a '71. The KAD 16v's are awesome fun.

If I may offer some advice, have a really good read of the current Miglia regs. And then read them again. Pay close attention to the sections on the body & suspension modifications. Know what you can and can't do. Avoid the carbon roof.

You don't want to end up building something that is neither a road legal street car (which track day cars need to be) or a 'legal' track car. There are conflicts you'll need to resolve but it is possible to end up with both (all be it swapping bolt on parts). For example track cars require a winged seat and road car no wings. The requirements for road seatbelt buckle greatly limits the options for 4/5/6 belts