201 replies to this topic

Got some primer on the boot lid, still need to drill out the lamp wiring hole and also the holes for the badges, but this should stop the rust for now. 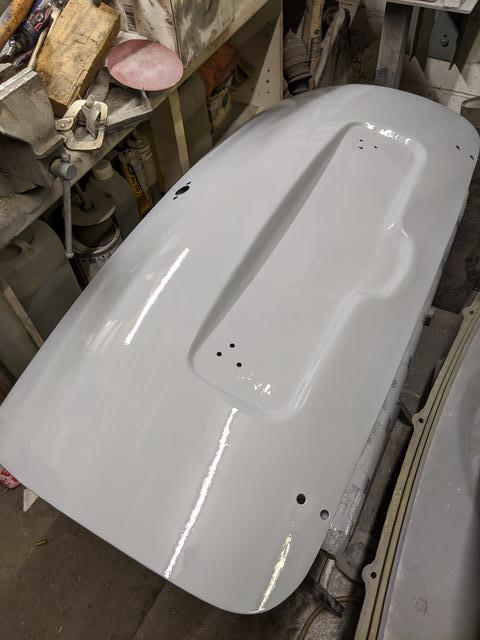 Also finished off filling the near side A-Panel and rear quarter and gave that a quick once over with the primer also. 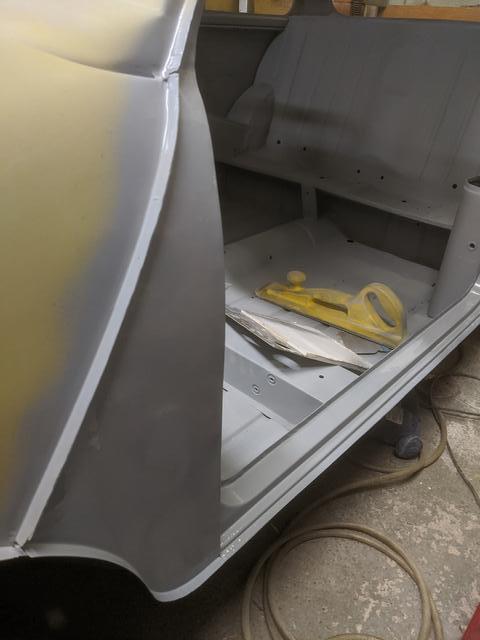 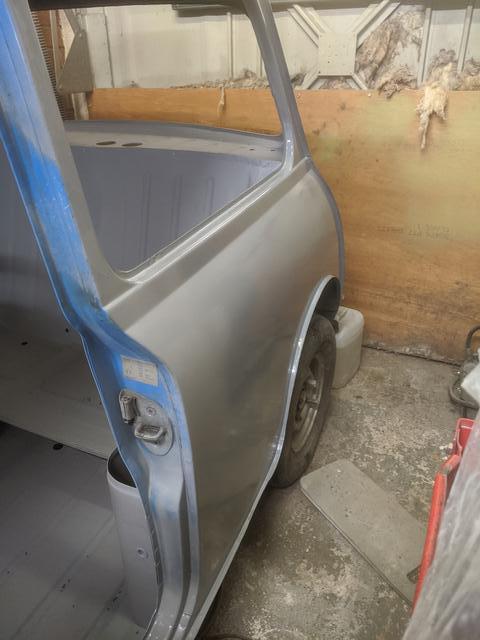 Nice work. You must be very proud. Looking forward to the finished article.

Got a little bored of being shielded so i decided to paint the interior. 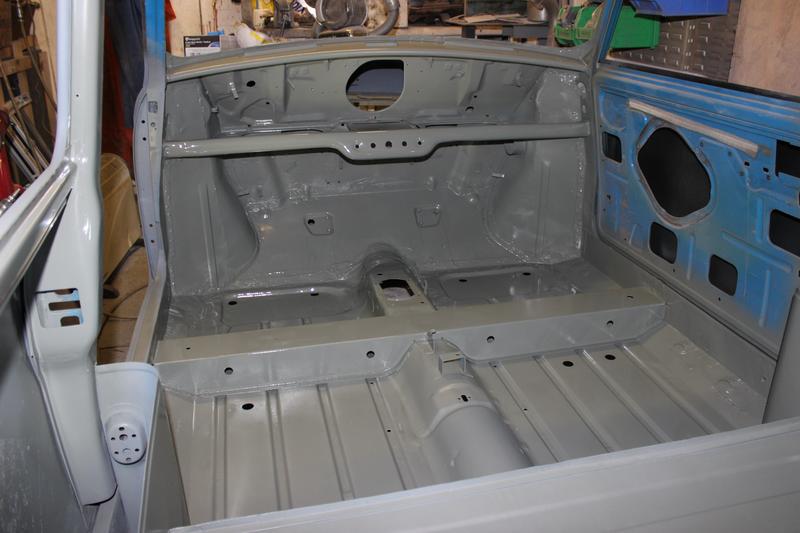 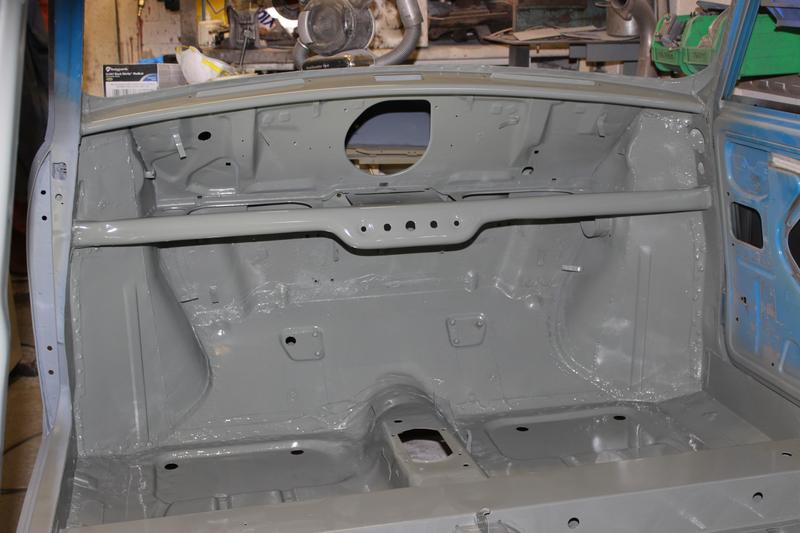 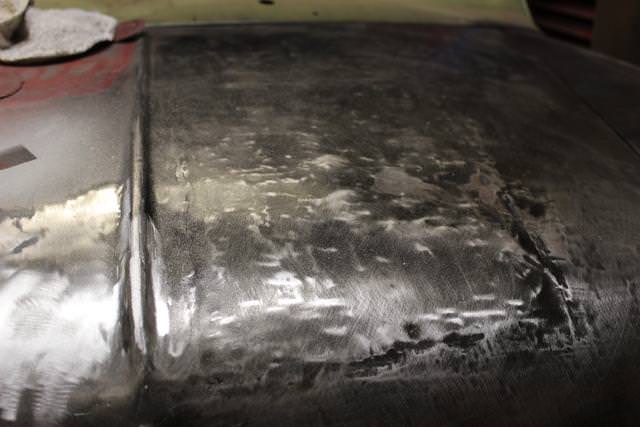 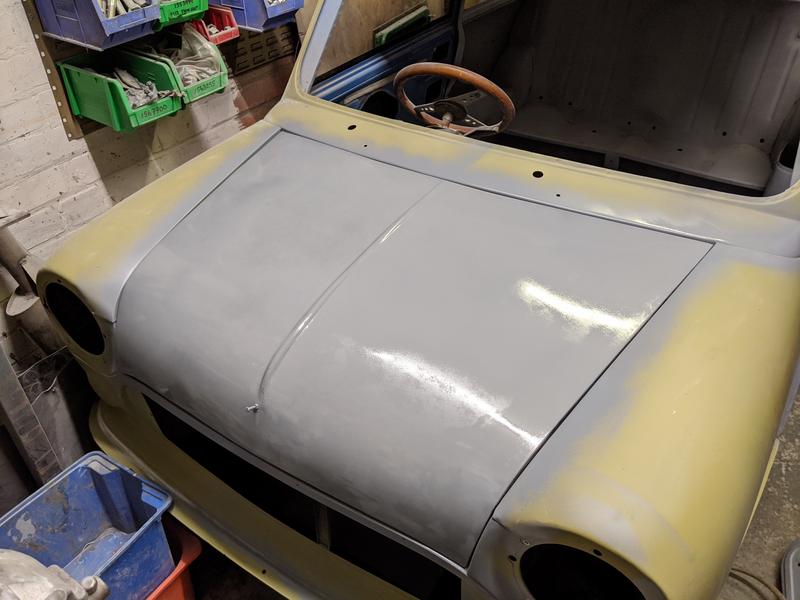 Boot and engine bay next i think.

looking good mate lovelly job and coming along nicelly ,just a small point primer is usually porus so it wont keep rust off for long

looking good mate lovelly job and coming along nicelly ,just a small point primer is usually porus so it wont keep rust off for long


Thanks matey, garage is quite water/wind tight so haven't suffered too much with moisture, plan is to get the outside in topcoat asap.

I stuck a load of silentcoat down to stop all the things that go bump in the night, just need a few more sheets for the doors, bulkhead and exhaust tunnel. 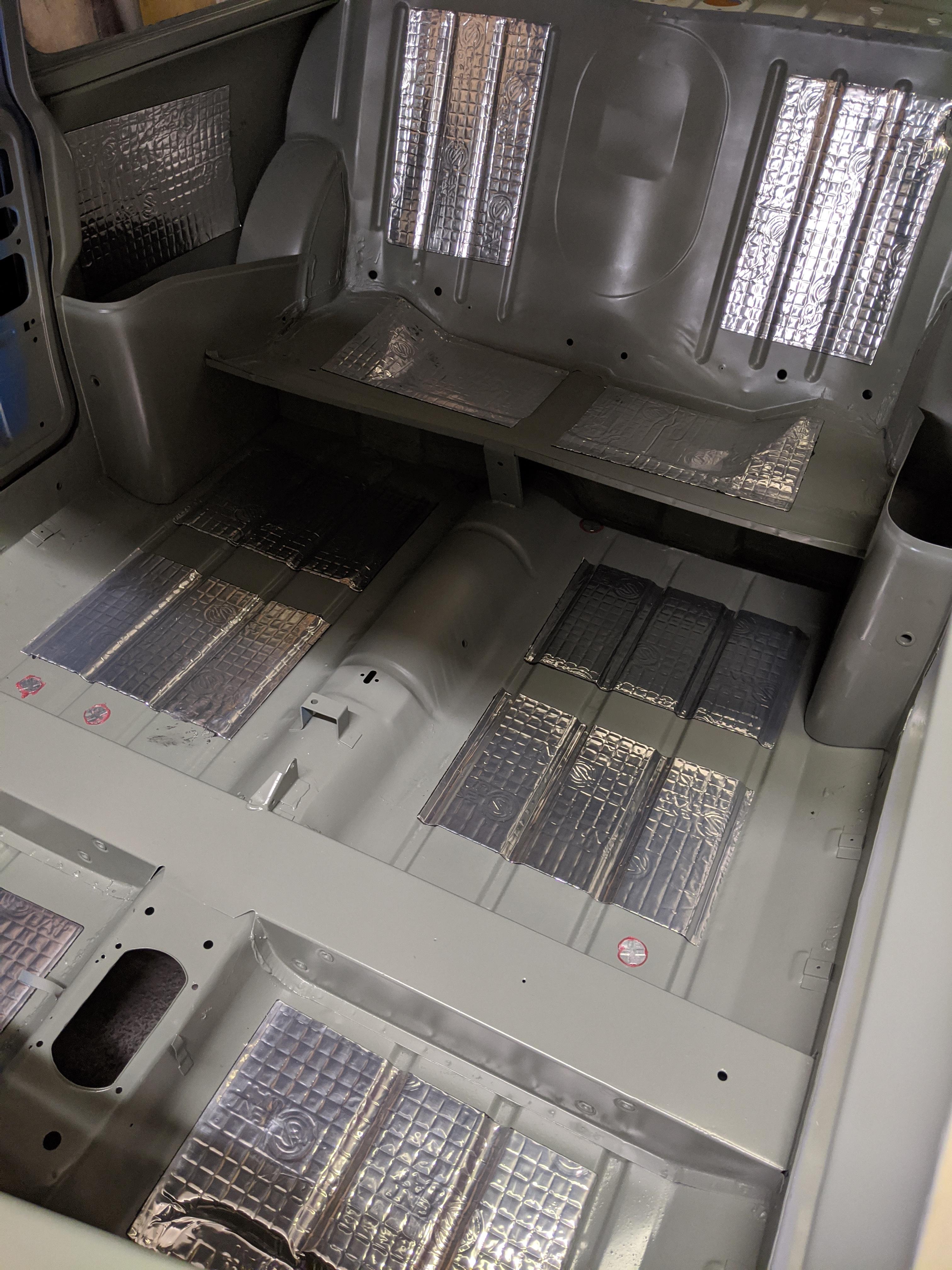 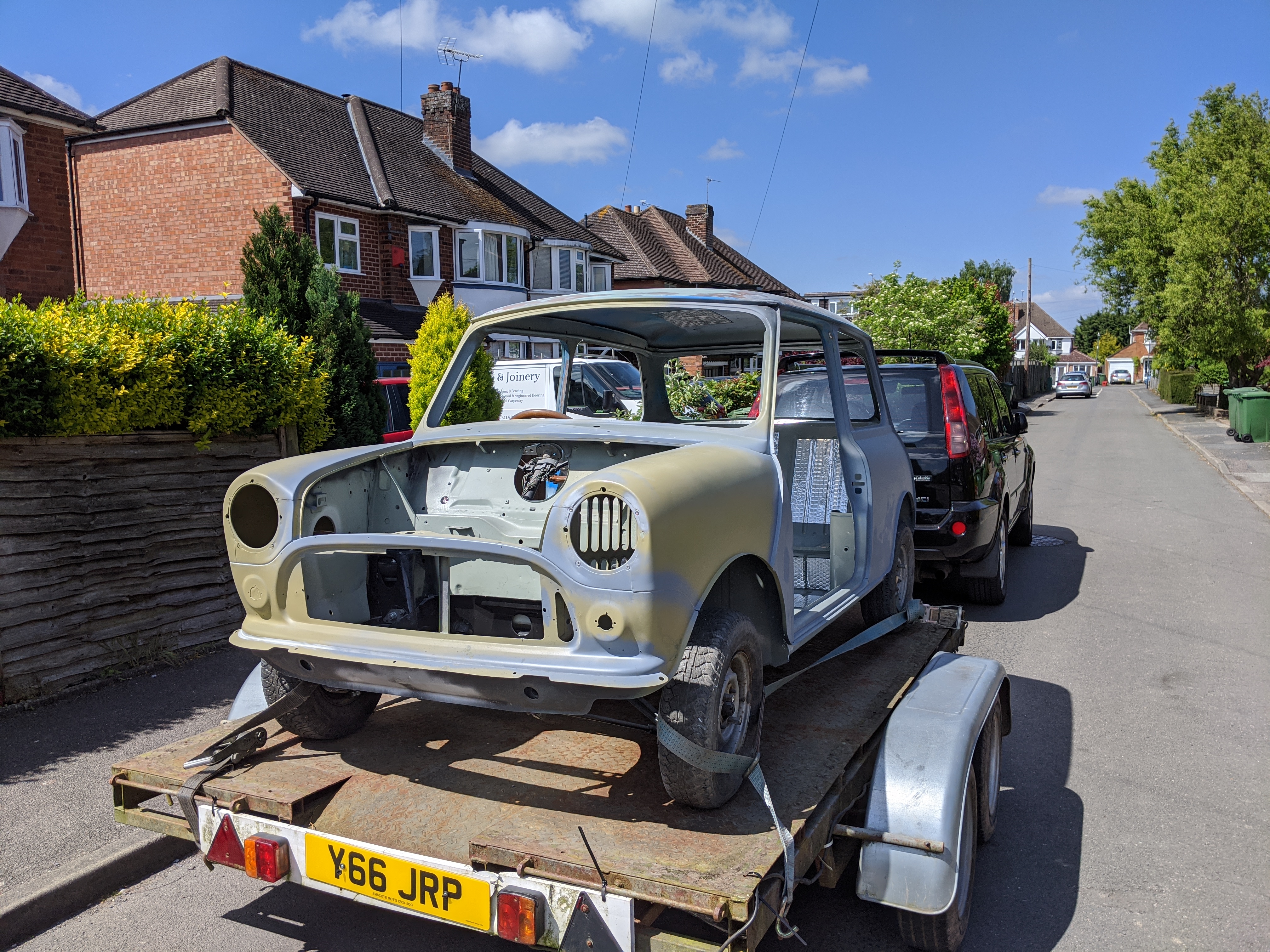 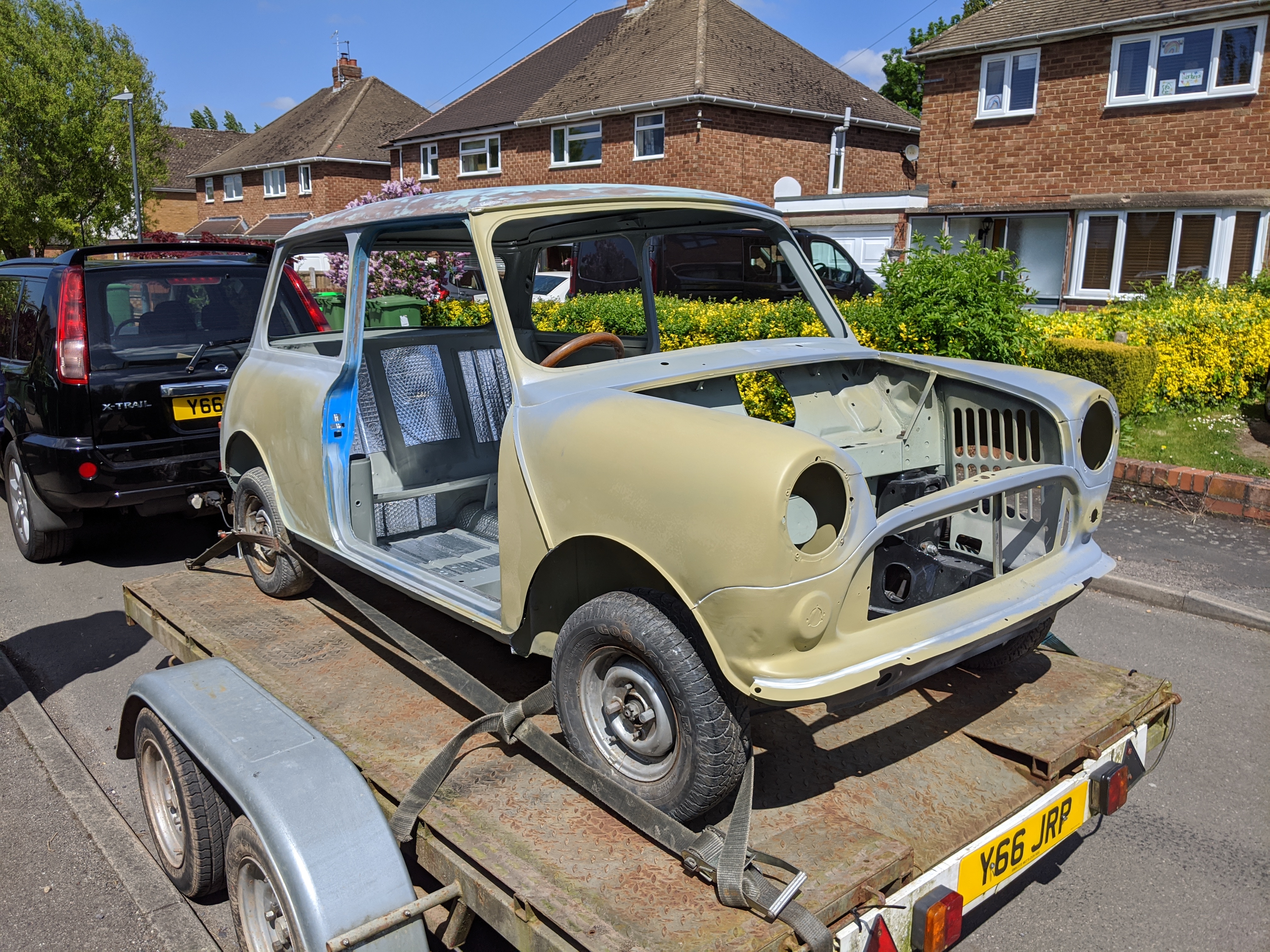 With the body out of the way it's time to start on the engine. Spec is fast road 998, fancy cam, ported head, lightened/ balanced flywheel etc etc

But first i need to get it mounted on the engine stand. So i set out modifying the standard mounting plate.

After a load of measurement I came up with this. 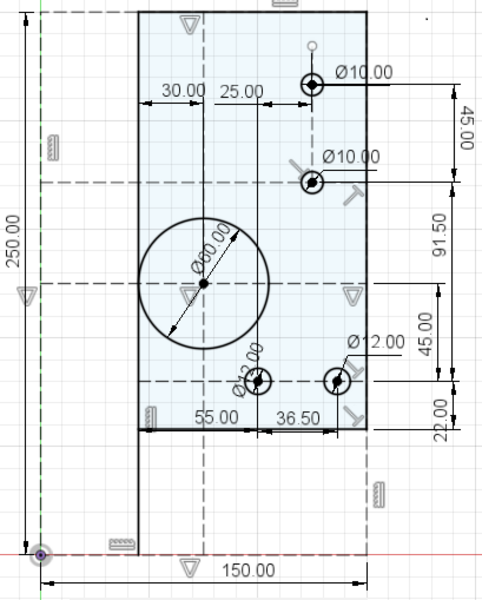 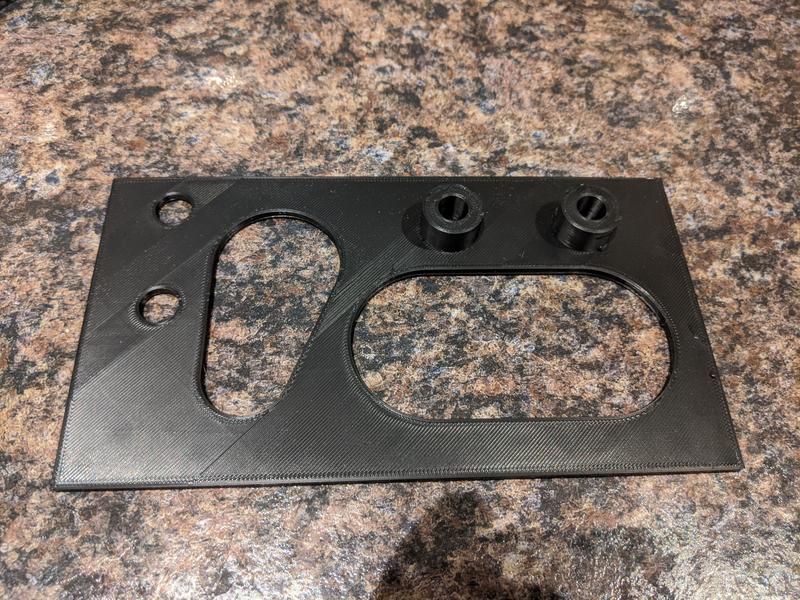 The bosses on the back are 11mm spacers and are needed as the alternator bracket mount points sit 11mm/7/16" back. 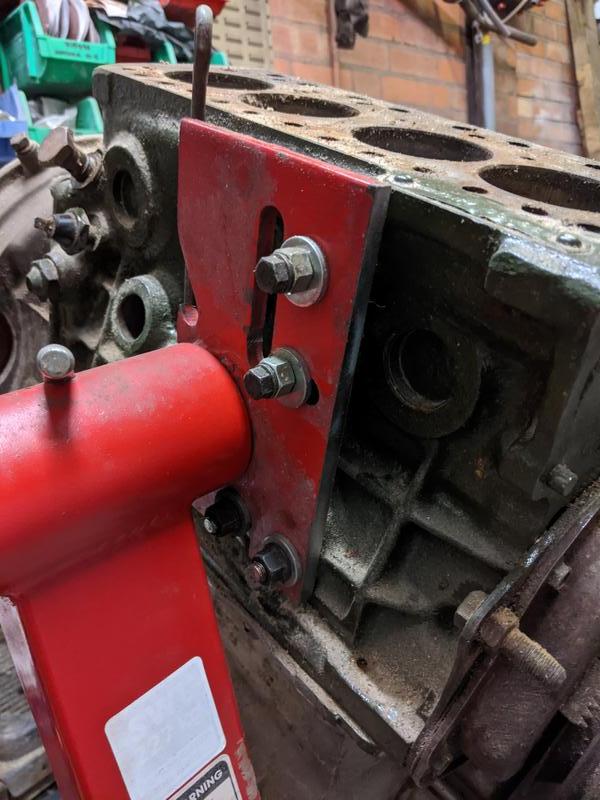 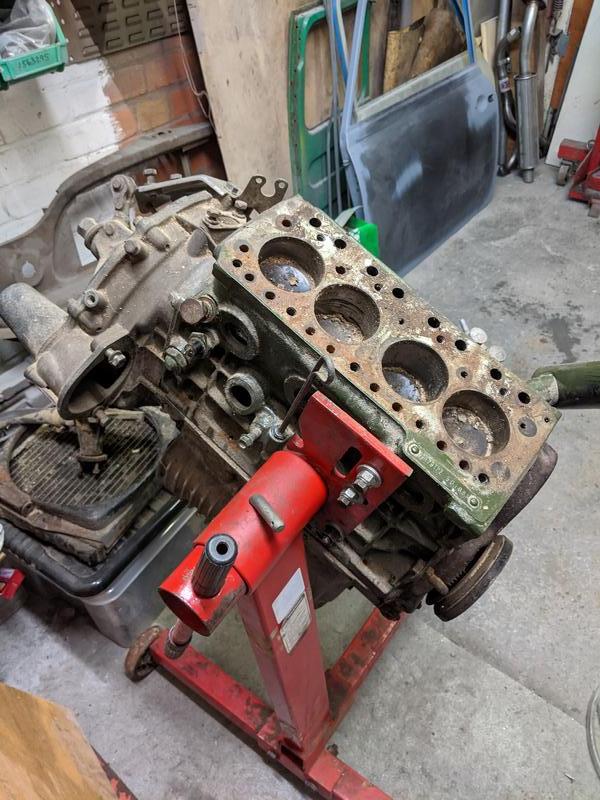 Just need to drill an extra hole in my engine stand, where the anti rotation pin goes, so i can get it sitting level.

I Also have a PDF template available which can be printed off full size if anyone fancy's having a go themselves. just send me a message and i'll forward it on. 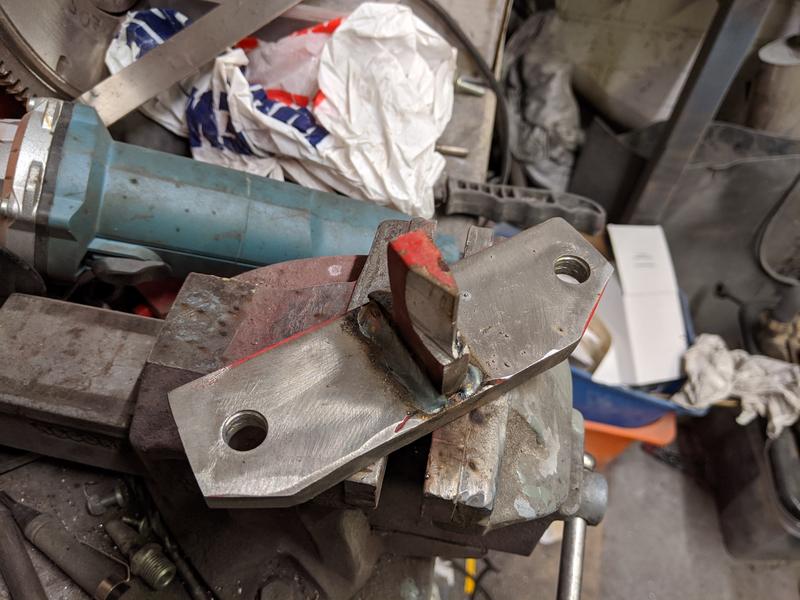 Should make the engine strip a little easier.

If anyone's interested i can post a drawing of the dimensions, should you want to have a go at making one yourself.

Or you could just buy one

Recently, I've made a start on a few different projects, but mainly I've been working on the engine.

First job was to get everything stripped down and cleaned, I had previously rebuilt this engine but decided to redo it as I wanted to add a few trick parts and make sure it was done properly (oh and it was full of sawdust from being stored in the shed without a cover over it) (see engine stand photo's).

I'm glad i did as found grit ?? in the bottom of the gearbox.

Block was first to get some attention. 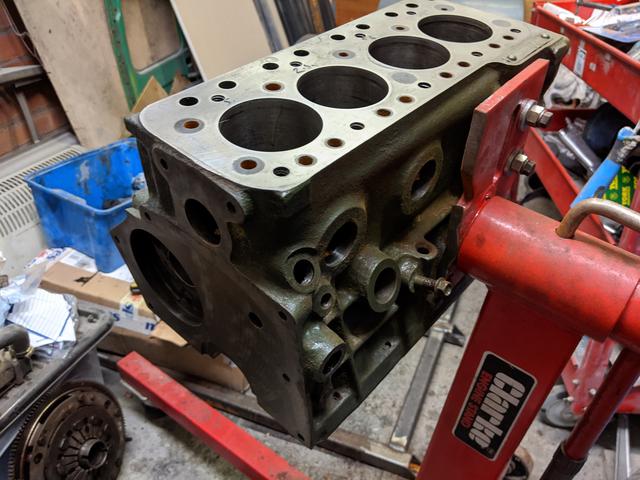 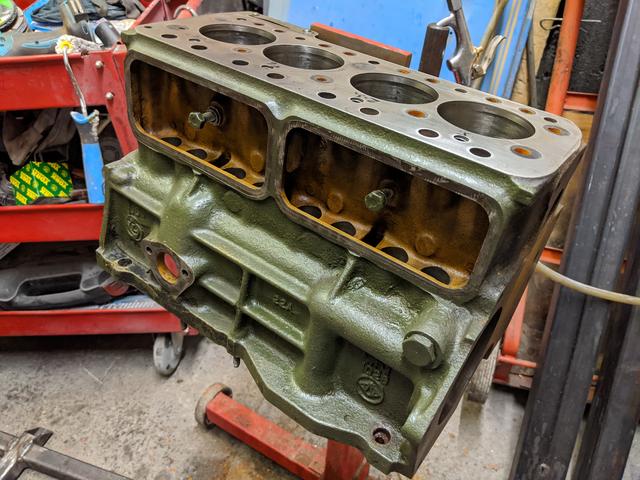 Bores were measured and found to still be well within tolerance and were given a light hone. Lips in the tops of the bores were minimal (they look worse in the photos because of the dark staining under them) but the pistons were not doing as well. The piston rings were jammed in the ring slots and I managed to break one trying to get it out, so rather than clean them up and just put new rings in I decided to order up some nice new flat top ones. This was something I had previously considered because of the increased chamber size in the cylinder head (although i did have it skimmed). 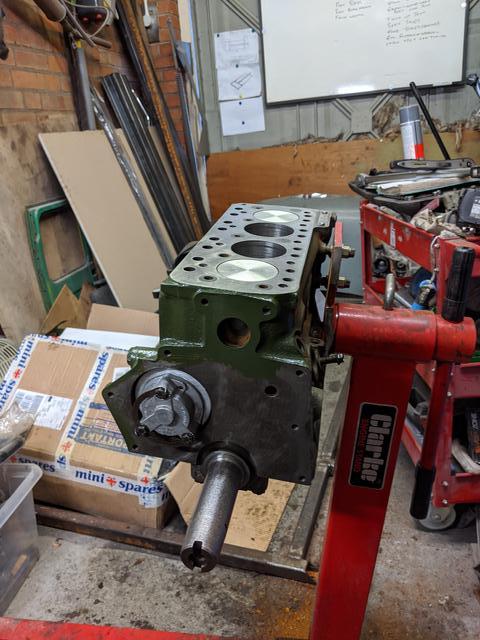 Crank was cleaned, measured, refit and given the OK. 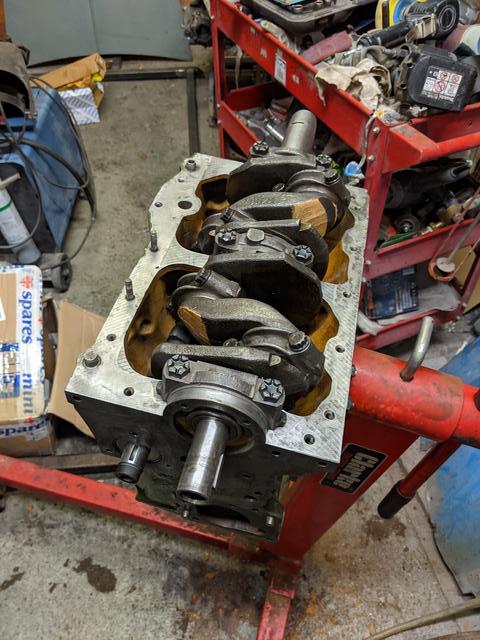 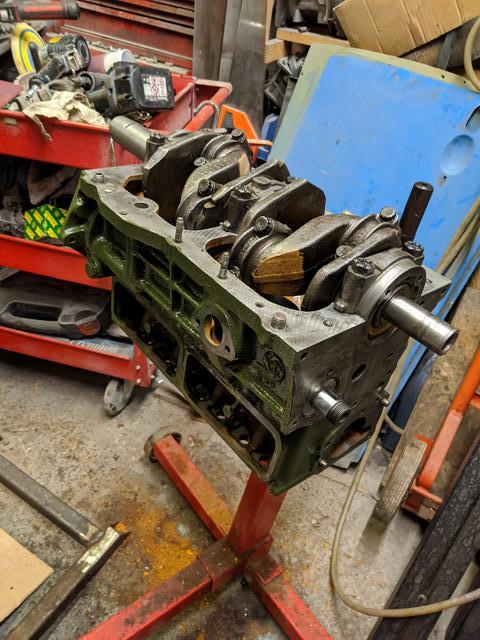 Next up was refitting the oil pump and cam shaft. Cam is a minispares Evolution001, I've heard good things about this cam in small bore engines so i thought i'd give it a go (and it's relatively cheap compared to other cams) Hopefully the other mods iv'e done to the head etc will help with any lumpy idle problems.

I also temporarily fitted the timing chain just so i could check the cam timing and order up an offset key if i needed.

This is how i do it.

First find top dead centre (TDC). I'm not going to bore you with the details of how as there are many tutorials on here and youtube etc. (unless anyone wants me to, in which case i'll do  separate thread in the appropriate section) 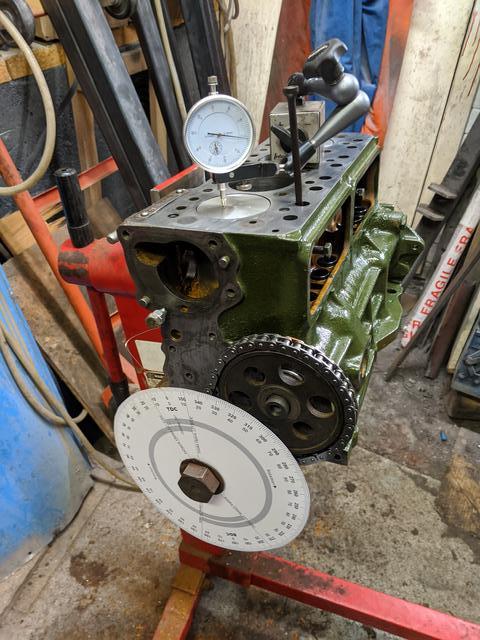 Next I put a push rod in the No.1 inlet and measure at what degree the inlet is fully open. 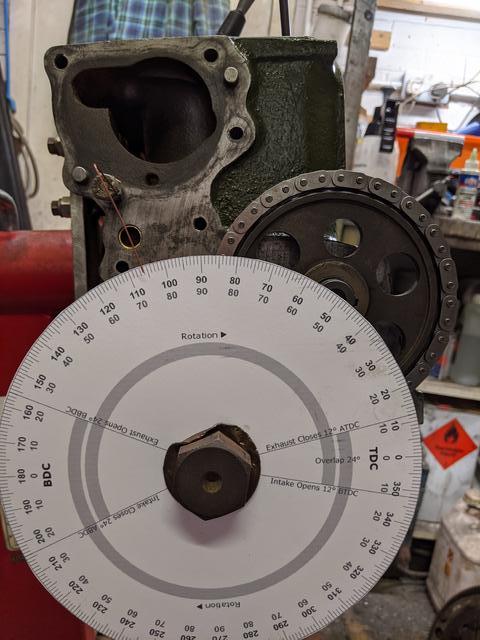 Minipares suggest 107 degree on their website, as you can see from the photo mine peaked at 106 degree which is good enough for me.

With all that done I slapped in the rest of the push rods and head studs and couldn't resist putting on the shiny copper head gasket, for no other reason than it looked pretty. 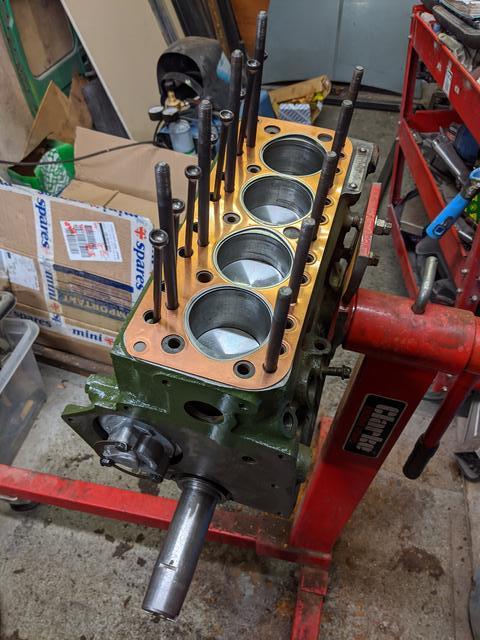 Much to my wife's dismay, more time spent fettling in the shed this morning, this time playing with the home brew flow bench  built a few months ago.

Here are a few pictures from back then. 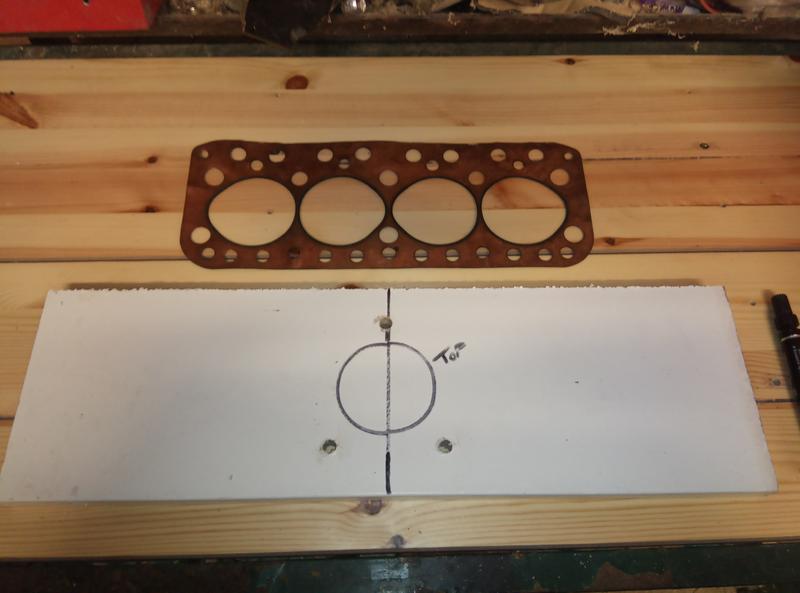 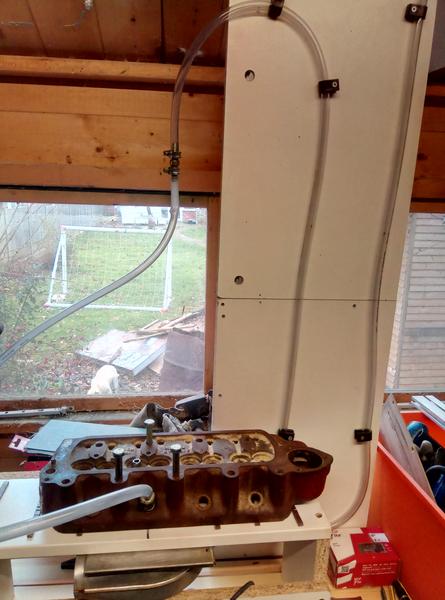 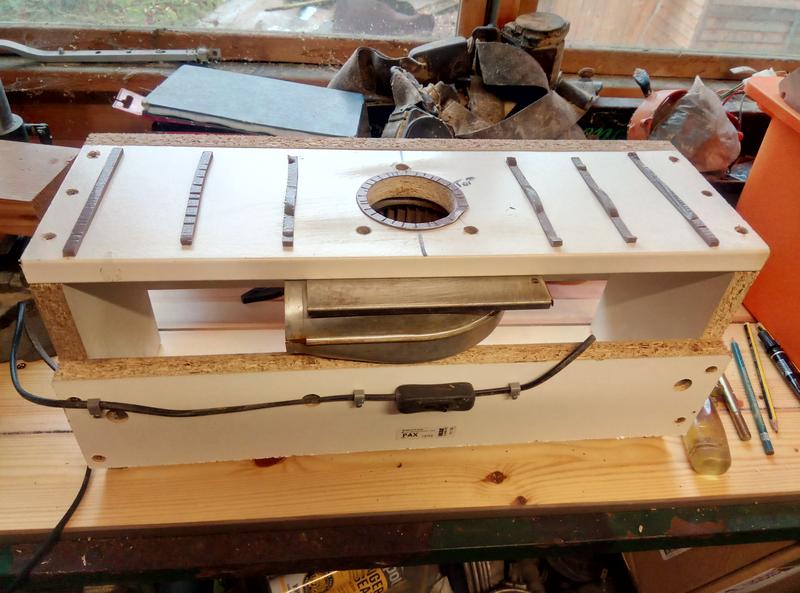 This first version used an old boiler extractor fan to pull the air through the cylinder head. Sadly, despite looking pretty, it just didn't have the grunt. (too much volume not enough pressure)

So it was swapped out for an old vacuum which did the trick nicely. 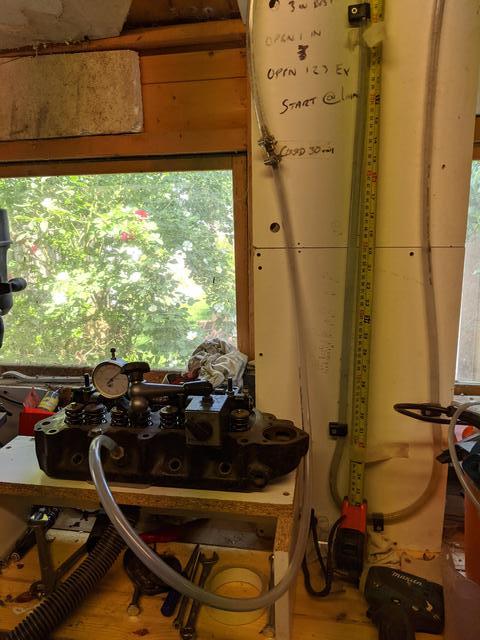 The idea behind the flow bench was not to fully develop a new hyper flowing, Vizard beating, chamber design. but to check the balance between the already ported ports.

not too bad to be honest. Biggest differences being at low cam lift 0.5mm to 1.5mm but since the valve doesn't spend much time in these positions I'm not too worried.

Now just to strip the head down, clean and rebuild ready to be fit atop the engine.

I'm keen to know how the small bore goes with the Evolution 001 camshaft fitted.

I'm keen to know how the small bore goes with the Evolution 001 camshaft fitted.

I’ll be building an 1100 for my mini. Read some good reports on that cam and for the price.

So the cylinder head got treated to a nice coat of green paint, swiftly followed by some new shiny studs, nuts and washers. 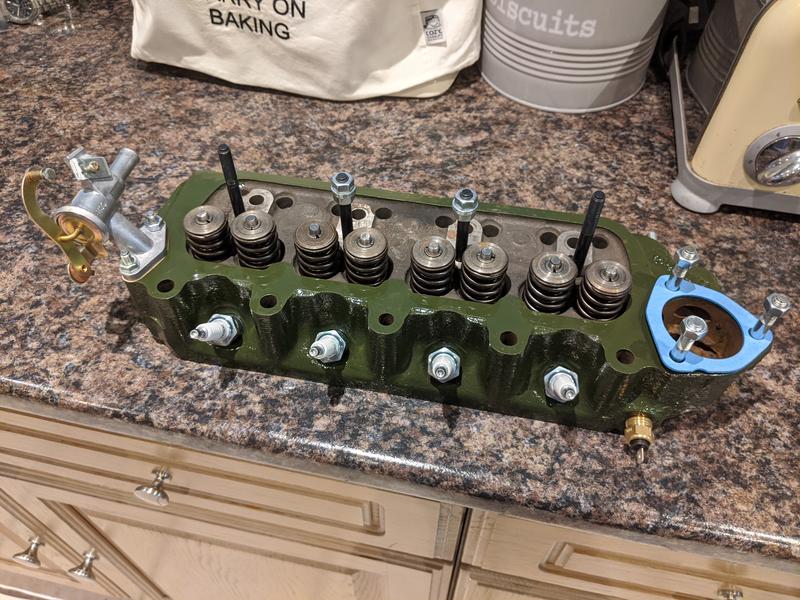 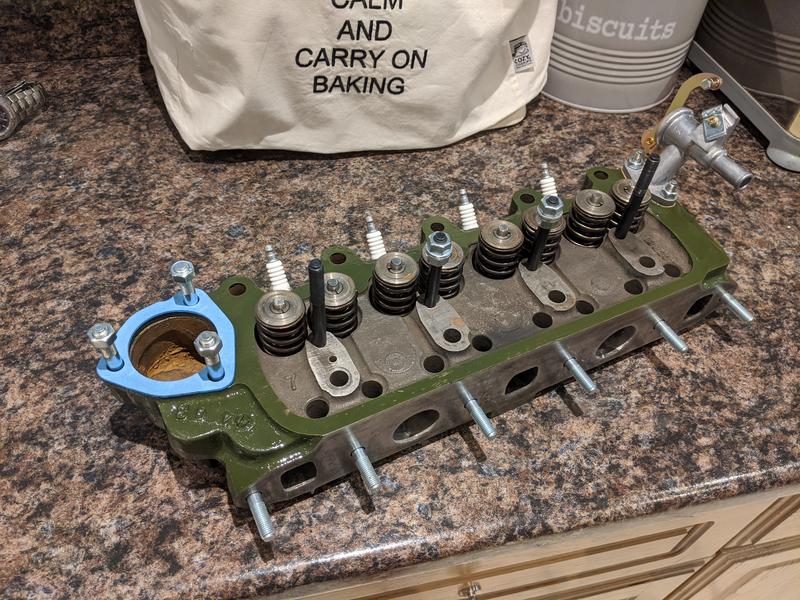 I'll plonk it on top of the engine later.