Thanks Andrew, hopefully we can move away from spending money and doing work instead

Right, we finished clearing out the garage and putting in the electrics so it's ready for work now. Moved the car in as the MOT has run out, I've cancelled my insurance and surrendered my tax disc so I guess in between now and May we will see if I sink or swim.

I was bored the other night so I decided to make a dashboard design in photoshop:

Those dials are not cheap though so it might be a while before it goes anywhere, interior is on the end of my list anyway.

The surround around the switches will be acrylic sheet that's sanded so it's semi-opaque. I'm going to mount some LEDs in to the sides of the acrylic probably 6 in total. Two white either side which will come on when I turn the side lights on, illuminating the switch panel and one orange either side that will be tied in to the hazard circuit and will make the acrylic flash orange with the hazards.

I've moved again to having a set of components attached to the doors, I'll set about making the enclosures before long.

Right, this is going to be a long one, got 28 pictures to go up, haha. Here goes.

This was a few weeks ago, thought I'd document the occasion because it's very very rare in Lancaster to have 3 Minis in sight at once, let alone parked in a row. The guy came out and said to me and my friend "Nice cars" we stood there with massive grins on our faces. Mini owners are just cool

Rolled her out the garage.

This is where she's being kept while I carry out the work that needs doing. I'm very appreciative that my friend and his dad have agreed to let me use their garage now we've cleared it out and give it power.

From inside the garage.

Right, on to the rusty bits, which is the part that's going to take a while haha.

Passenger door, doesn't matter as I have a replacement waiting to be reskinned and put on.

Passenger sill, oversill will be coming off and replaced with genuine sills after the damage they've caused is corrected.

Driver sill, same as passenger will be replaced with genuine.

Driver door, same as passenger, I have a replacement to go on. 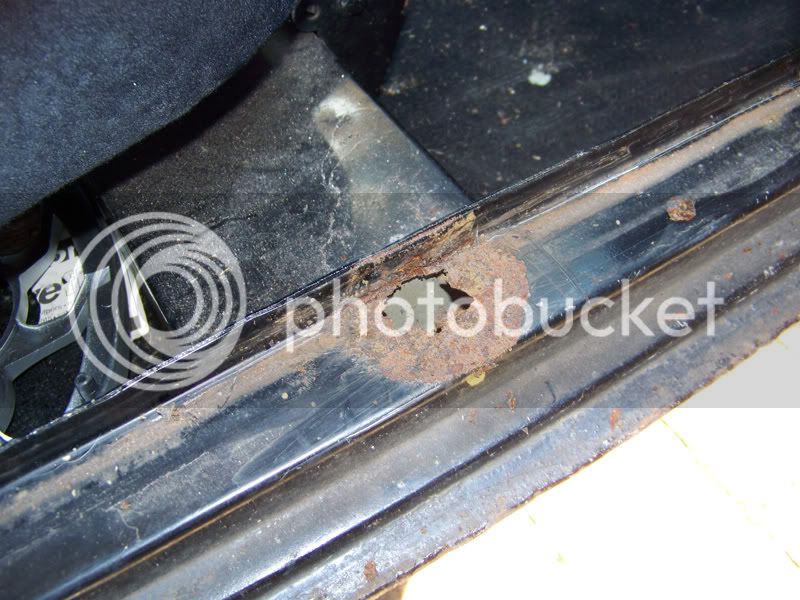 Same area, you can see the floor through there.

Front panel at wing join, it's much worse under the plastic arch.

Took the doors off for storage. One of the bolts was being a pain so I removed a chunk of the a-panel to make access easier.

Bottom of the flitch I believe? Rusty hole near the sill.

Driver side flitch? Again, rust near the sill.

Removed the light buckets ready for the front being cut off.

Closer inspection of the driver side rear quater rust. Ughr. 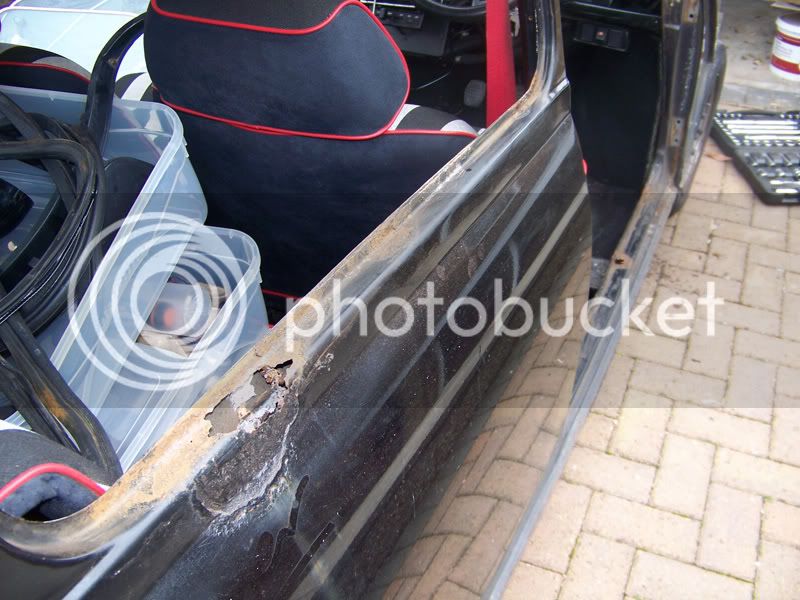 Tucked back away in the garage.

As you can see, much work to be getting on with

haha awww poor Elliot, At least you have Hillary to fix you addiction of mini driving

haha awww poor Elliot, At least you have Hillary to fix you addiction of mini driving

Haha, she's not that bad. Have a look at some of the other threads on here, makes Elliot look almost pristine, haha.

Thanks for letting me use your garage

I'll be round soon to do a tip run and move a load of stuff to my house out of the way.

I was thinking aswell, I can probably cut sections out of the wings for patch panels elsewhere, as long as I flatten them nicely before welding them back in.

Got some work done today, here are the pictures:

Driver side wing off.

Backed out the garage and back in to it so it's facing the other way, easier to work on the front this way round.

Passenger wing off too.

Threw my glove on the floor and it gave me the peace sign.

That's how I left her for the day. My friends dad is going to try and get me some 30mm box section from where he works tomorrow so I can make my brace bars up for the flip front. I was suprised to find that my scuttle ends and fillet plates are in very good condition so I won't need to bother with replacing my scuttle.

looks like you have made a good start,keep up the good work

Liked the dash clocks need to make one up for myself where can you source those clocks from and what dia are the speedo and tacho.
Rofert

quite a bad way it was hey!! coming on great now hey!!!
good luck

i know how you feel no ones with the exeception of like 3 people have cooment on mine.... so i havnt really bothered... but mine coming along great!!!

looks like you have made a good start,keep up the good work

Thankyou sir, your pictures have come in handy and made me feel alot more confident about what I'm doing. A-panels will be coming off tomorrow and I think I might chop the driver side oversill off and get to work repairing the inner sill, flitch and door step.

Liked the dash clocks need to make one up for myself where can you source those clocks from and what dia are the speedo and tacho.
Rofert

I found this site for all the AutoMeter gauges and trust me, they do alot:

In my diagram the small dials are 52mm and the bigger dials are to scale, but I can't remember their exact measurements, they will be listed on that website though

quite a bad way it was hey!! coming on great now hey!!!
good luck

i know how you feel no ones with the exeception of like 3 people have cooment on mine.... so i havnt really bothered... but mine coming along great!!!

Ahh it wasn't too bad really, just really glad to find the scuttle in one piece

Looking good mate, nice to see some progress. I love the dash design too!

I need to do something a little different with my dashboard in the FReaK, but I dunno what to do yet. Gotta get a digital dash in there at some point.

i think my mini has oversills on, as my floor is abit like yours in the corner.

Looking good mate, nice to see some progress. I love the dash design too!

I need to do something a little different with my dashboard in the FReaK, but I dunno what to do yet. Gotta get a digital dash in there at some point.

I considered making like a modern center binnacle, so the dash was raised up and further in to the car in the middle where the clocks were situated, like a Corsa C binnacle, but bang in the middle of the car. Maybe you could look in to something like that? If it's to your tastes of course

i think my mini has oversills on, as my floor is abit like yours in the corner.

Oversills are the devil! Tear them off man for the love of Minis!

I got some more work done today, granted no where near as much as yesterday but it's alot easier to roar around tearing bits off and not putting anything back. Anyway, here's todays stuff:

I removed the driver side a-panel and trimmed the winner wing down to size. I had a play with the paint stripping discs I got off ebay too, which worked very very well.

I ground off the bolts that used to hold the fresh air vents. I'm going to cut some circles out of the inner wing I cut off and weld them over the holes as I want the vents sealed off.

I've been looking at this bit near the scuttle and really don't know what to do. I can see the metal behind the fillet plate is slightly rusted but I don't know if I should go to the trouble of cutting out the fillet plate to get at it. Maybe someone can give me their opinion before I ask in Bodywork.

I had some Kurust in my toolbox that I'd never got round to trying out so I thought I'd paint the remaining surface rust on the inner wing (the bits the stripping disc wouldn't remove).

Stripped everything off my bootlid so it's ready to have the skin removed, I only want the frame from it so I can bond it to my new fiberglass bootskin. Keeps it structural and secure this way. 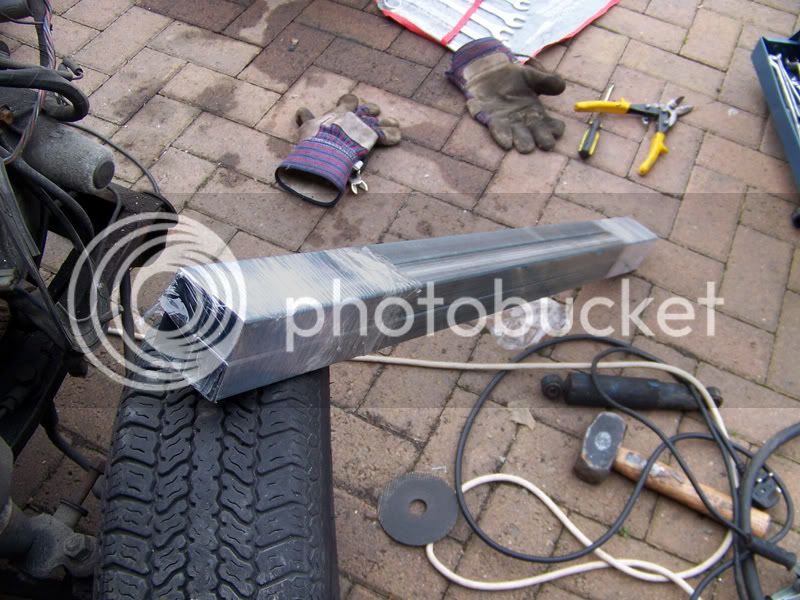 My friends dad managed to get me some steel box section from where he works, it's a bit thick for the style of brace bars I want to make but it only means it'll be stronger so I'm not worried.

Tucked everything away back in the garage for the day.

Started off the day with Scott showing me the apron he nicked from work so he can wear it when he works on his car, wonder how long it'll be green and white for, haha. 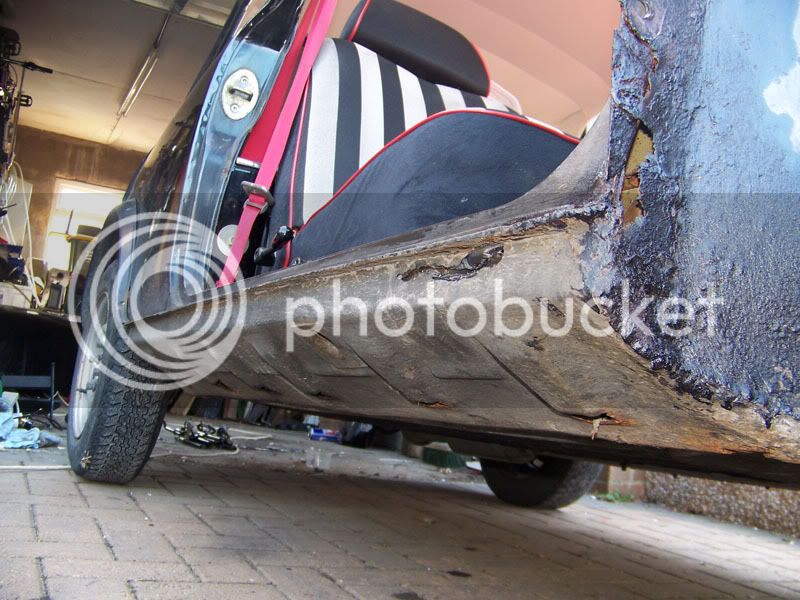 Nothing quite prepared me for this, I was ready to pull it off and loads of rusty mess to fall out of it but I was not prepared to find metal that still resembles a sill! I can't even believe they put oversills over those! I've had the car a year and the majority of the damage to that sill must have been done over the past 12 months so when they put these oversills on the original sills couldn't have been that bad really.

I found some thin metal at the back of the inner sill, I'll chop all this out and weld in a nice patch. 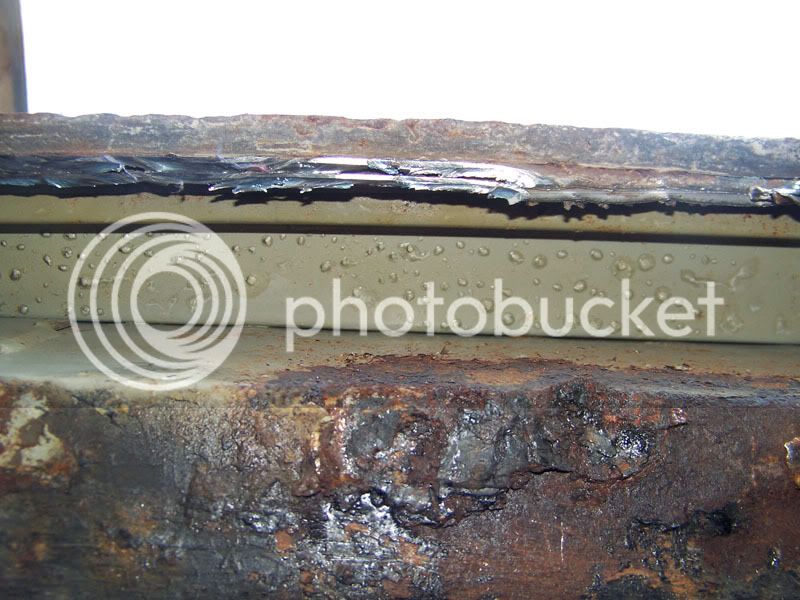 This picture is facing up and shows the bottom of the door step which as you can see, is in great condition. I won't be replacing the entire step, just chopping out the bits where it's rusted through.

Same angle, towards front of doorstep, all good.

More thin metal at the front of the inner sill, going to order an inner sill repair panel for both sides of the car, just makes patching easier

Chopped off the end of the oversill and the rotten flitch at the bottom up to where it meets the floor, this area will need a few patches aswell.

All the rust that fell out of the sill when I cut it off.

This is a boot catch for a Peugeot 106, I'm going to adapt a pair of these to my flip front so I can pop it open from the inside. I also got some bonnet lifters off a 106 too but I think they're far too powerful for my front end.

Test fitted the front end to see how well it err, fitted. Alright that's a lie, I just wanted to play

Thanks for reading and give me some comments guys! I enjoy reading your input.