I'll have a go tomorrow. It actually looks like it might be possible to rotate them independently of each other which would be nice. Just need to be careful that I put it back together properly so it's sealed.

In my defence, I sanded it back and treated it with Hydrate 80 and it looked pretty cool. For some reason in that picture it just looks rust encrusted. I'm not taking the radiator out again

. Well at least not until there's another reason to

I feel like I may have a problem. Started playing with fitting the LCB last night and an issue came to light fairly quickly. 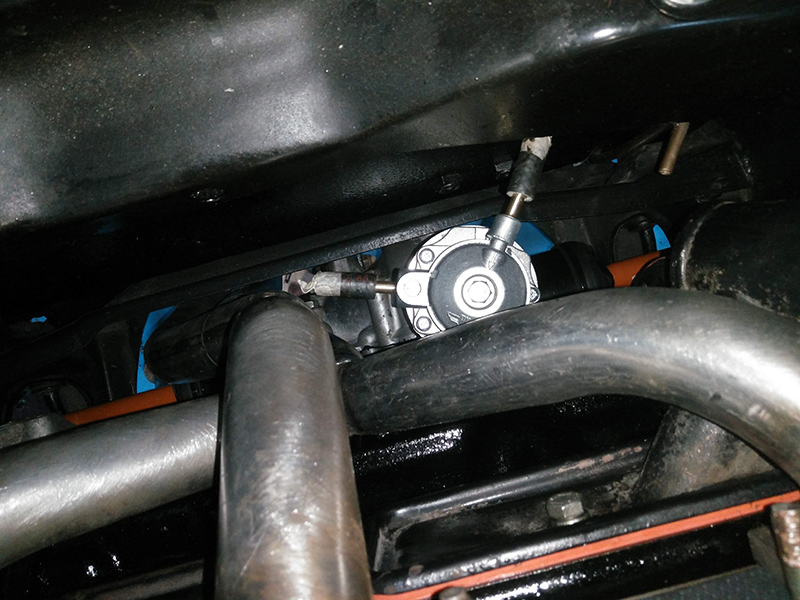 That's a bit too close for comfort.

The outlet on the fuel pump is pointing straight at the centre branch of the exhaust manifold. The fuel pump is an aftermarket replacement and the pipes aren't quite in the same place as the original. Definitely don't feel comfortable running it like that.

I am wondering if it's possible to remove the 6 screws securing the top of the pump to the body and rotate it so I've got the fittings on right, pointing away from the exhaust.

The only other option I can think of is to try and bend the outlet piping up or towards the bulkhead without crushing the pipe. Either way I think the pump needs to come back off so I can address it.

I had the same issue with fitting the same pump a few weeks ago. The plastic bit on the arm doesn't come off and stays attached, and as you're found out the inlet is pointing in a less than ideal orientation.

Pretty easy fix though (I did mine off the car before fitting) If you undo the centre bolt (7/16" i think) you can rotate the top. Or as I found if you remove the bolt and the top cover, there's a handy little filter built into the top of the pump.

The inlet I could have lived with, but there's a possibility I wouldn't have lived with the outlet! It's a bit frightening really because I can't see many people buying the genuine replacement mechanical pump as it's 4x the cost of this aftermarket one. That coupled with an LCB not really being an uncommon modification makes me wonder how many Minis might be driving around with the fuel outlet about 10mm from the manifold.

I've documented what I did thoroughly and I'll cover it in detail in a thread I'll put in the Technical section to try and help people in the future. 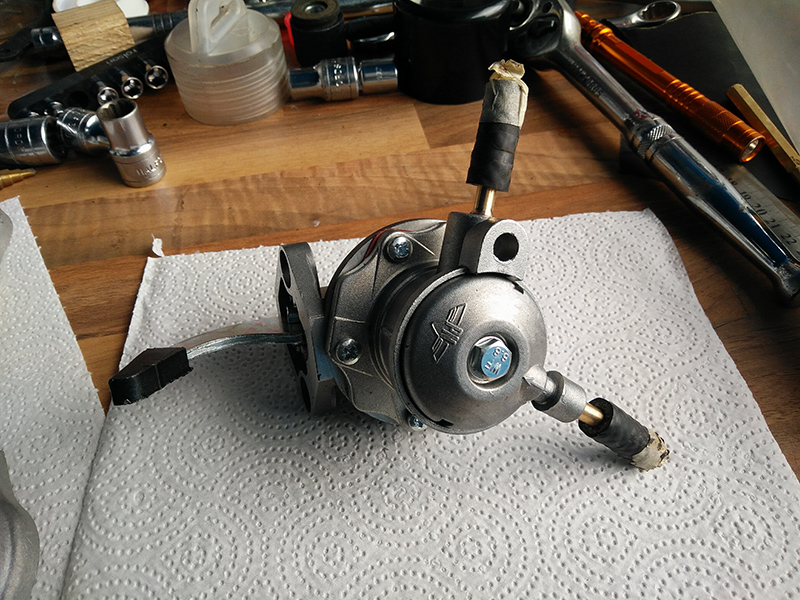 Removed from the block, what a delight with the tappet chest breather in the way. 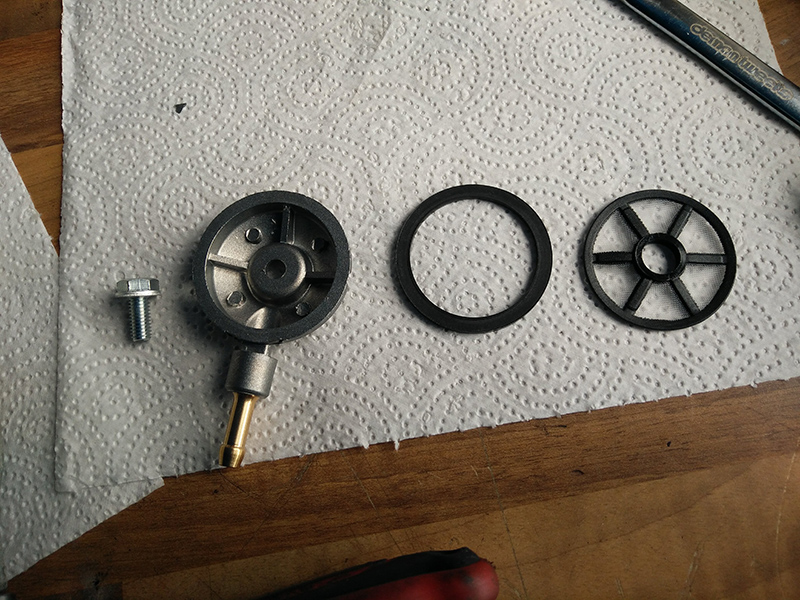 Top comes off with a single bolt and houses the inlet barb. There's a rubber sealing ring underneath as well as a mesh filter. 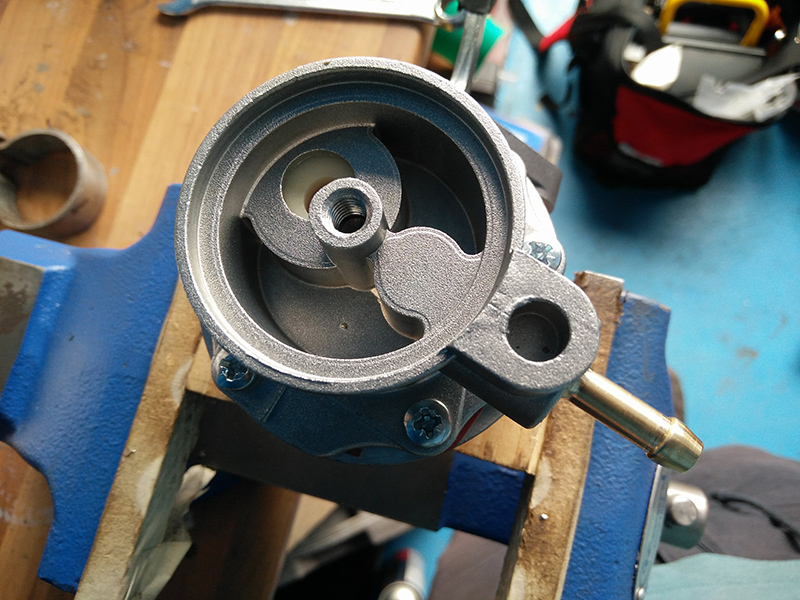 This is the second part of the body which houses the inlet and outlet valves as well as the outlet barb, I'm going to call it the valve housing. 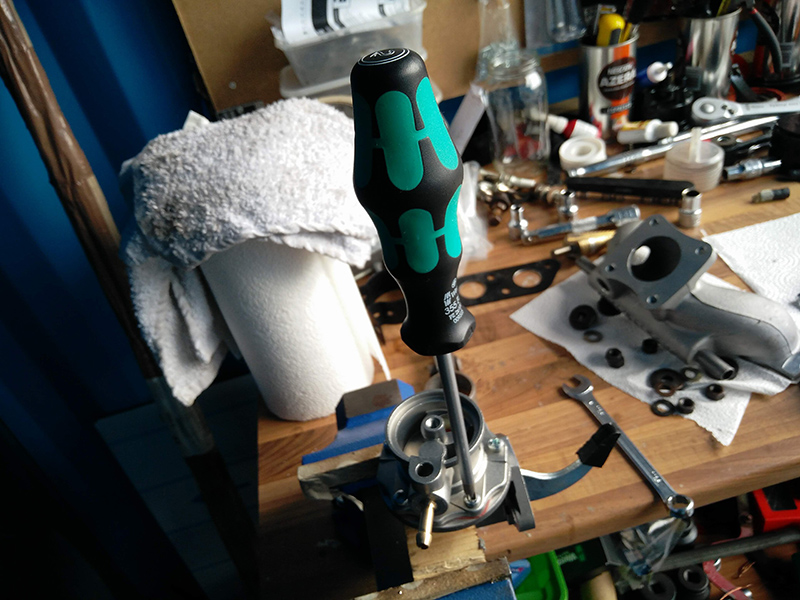 Bought myself some Wera screwdrivers months ago and eventually migrated them to the garage. Such an improvement over the cheap screwdrivers I've been using for years. 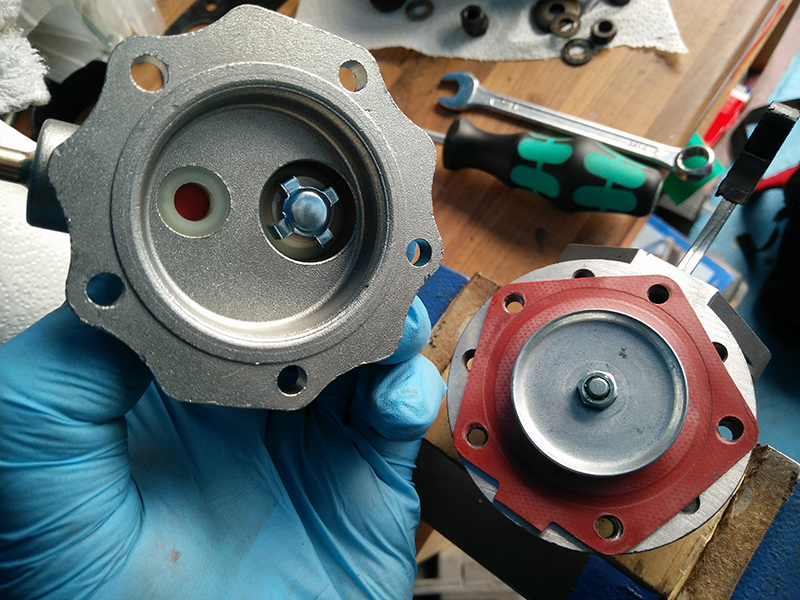 Screws out and the valve housing comes off. The bolt pattern gives you a choice of five orientations for your output barb. 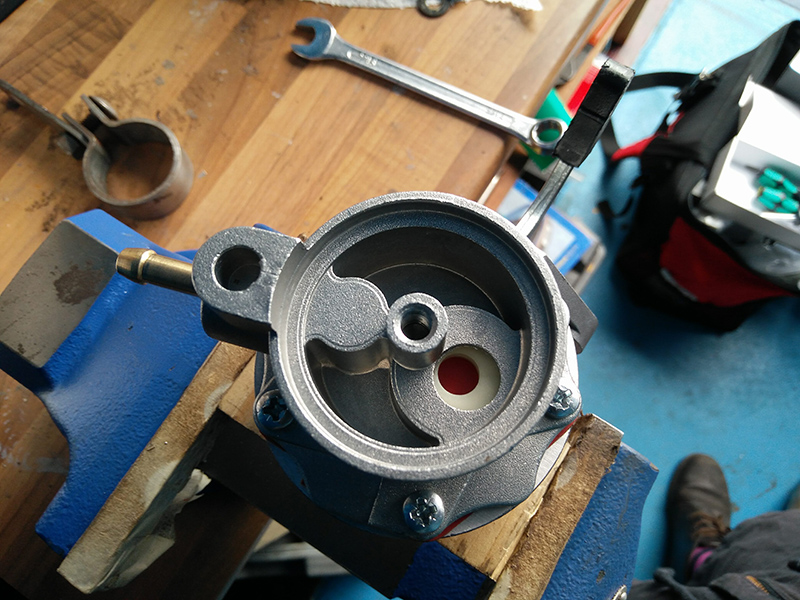 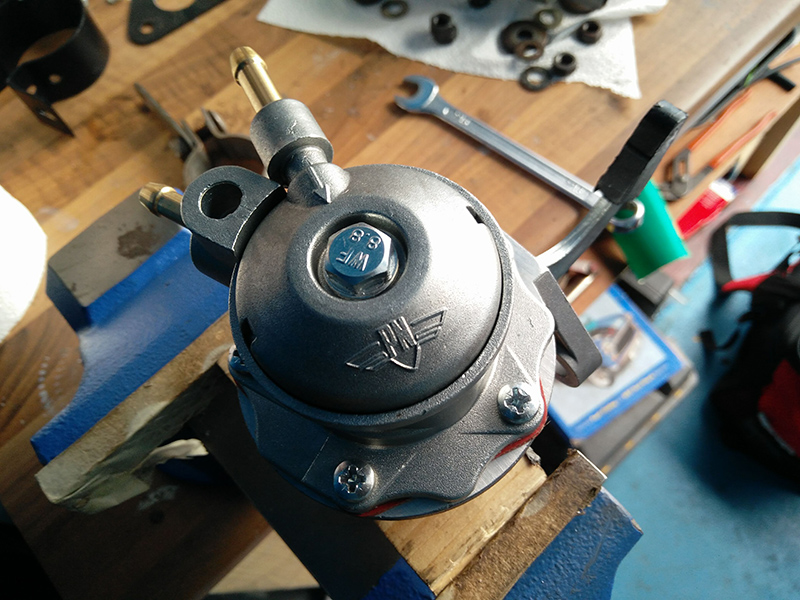 Filter, sealing ring and top back on in chosen orientation. 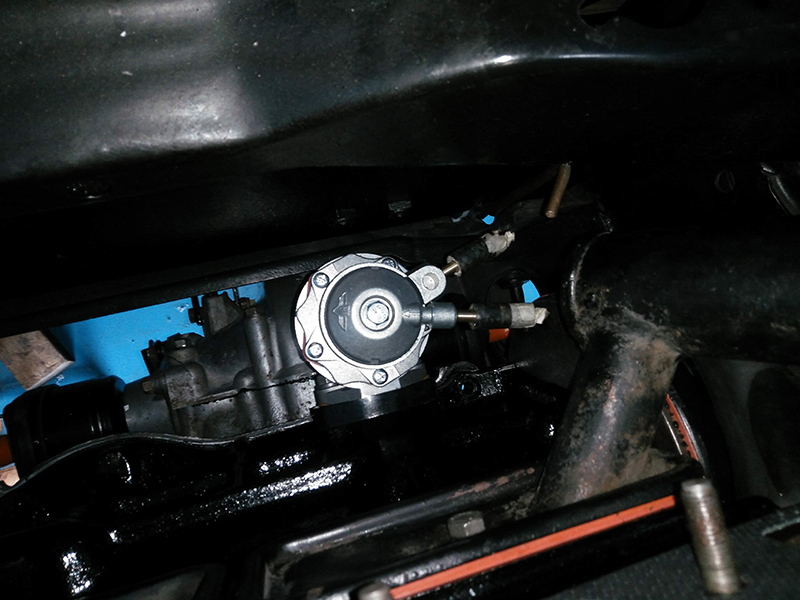 Both barbs now point away from the exhaust. It's going to be a tad confusing as the outlet barb points right at the feed from the tank. The inlet on the pump has a clear indication though so I don't see it being an issue.

I did some fighting with the LCB but it's not quite there yet so no pictures. I also have finished tidying up the main wiring loom, including adding that new 12v feed for the electronic ignition. It's all at the garage now waiting to be installed.

Continued the battle of the exhausts at the weekend. 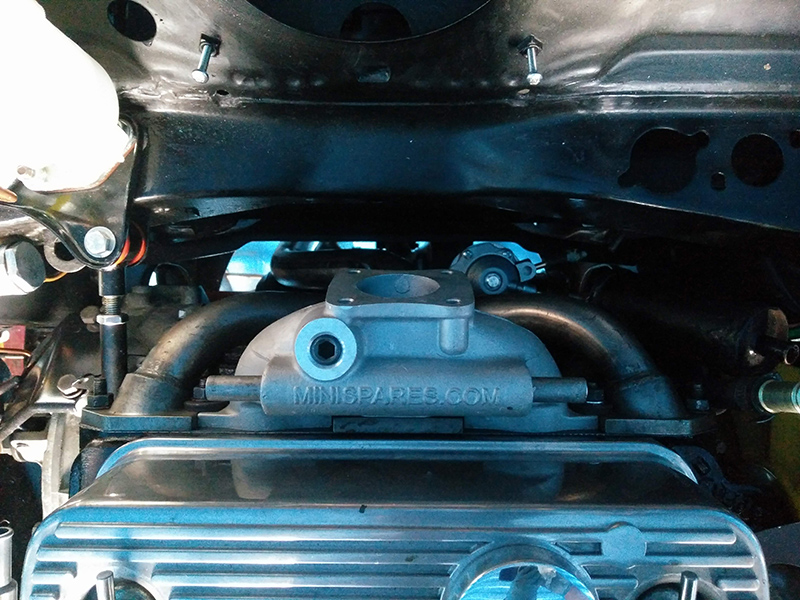 Inlet and exhaust manifolds in place. 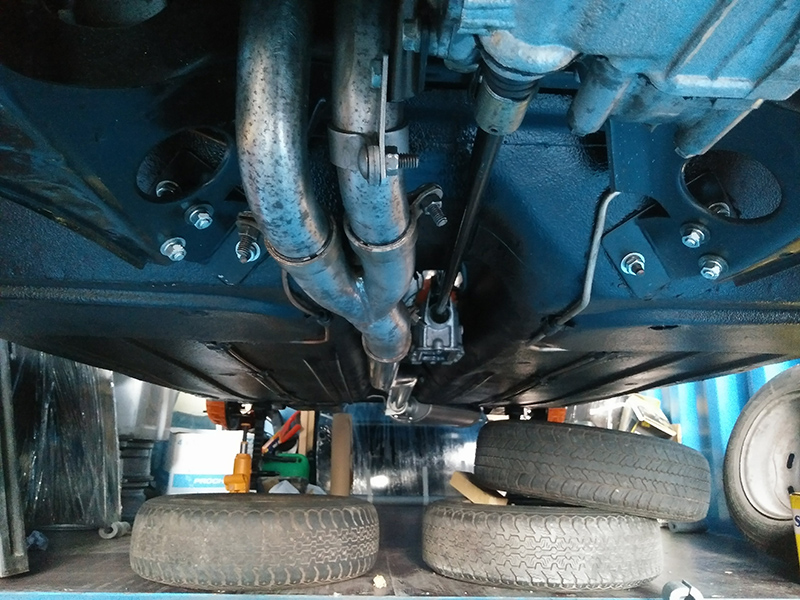 Bottom of the manifold branches meeting the y-piece. 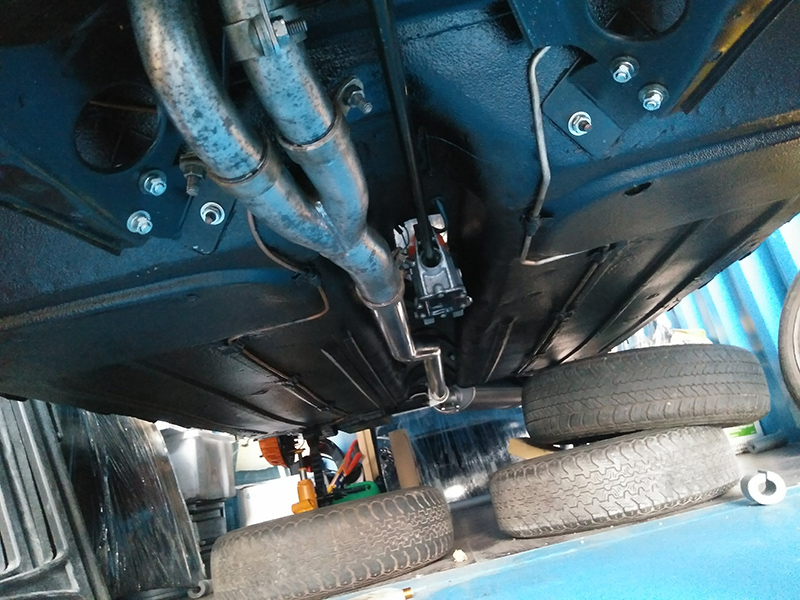 The back box is in place but I was missing a clamp so no pictures of the outlet. I'm pretty happy with where I've got it positioned.

Back up in to the engine bay again next.

It is but frustratingly I feel like I'm going to miss MITP by a few weeks. I'll keep on as I am but I don't think it'll happen now.

Been a while since I was here!, had a log in to see how you are doing.

Plenty of progress on Elliot recently, amazing work as usual.