Complete Build without replies can be found here:

As most people who start down the route of building or even part building a Zcars mini conversion, you initially ask Chris a few questions, then you go up to Gallows Farm for a tour and a taster in the demo car, were (I think most who have had a demo from Chris will agree) Chris erases any doubt in your head as to whether or not you should buy one of their kits. The fantastic noise, the unbelievable grip, the awesome stopping power of the demo car coupled with Chris's driving skill makes for one of the most exhilirating demo's I've ever had. Oh and dont forget Chris's no bullsh*t sales patter, he's got that down to an art form.

So I was well and truly sold, I simply had to have a Zcars mini. Looking around at the other cars and asking questions of the guys about the cost of building one of the beasts I got an idea of how much I wanted to spend. Then I went home, thought about it, thought about it some more, started to do a few sums and then took the plunge and got Richard to send me a quote.

Upon recieving the quote it dawned on me (some of you who have built one of these are probably gonna laugh in agreement at this statement) that my budget was about double if I was going to get all the things I wanted in the car. When I tell people that I could easily have bought a new Evo X or a very nice second hand Porsche for the money I am spending some scof and think I have lost my marbles, others understand that this is a one off and no-one in the world will have exactly the same car as I will have when I finish this journey, of which I am only halfway along.

So I bought a second hand shell from Chris, which was pretty much sound: 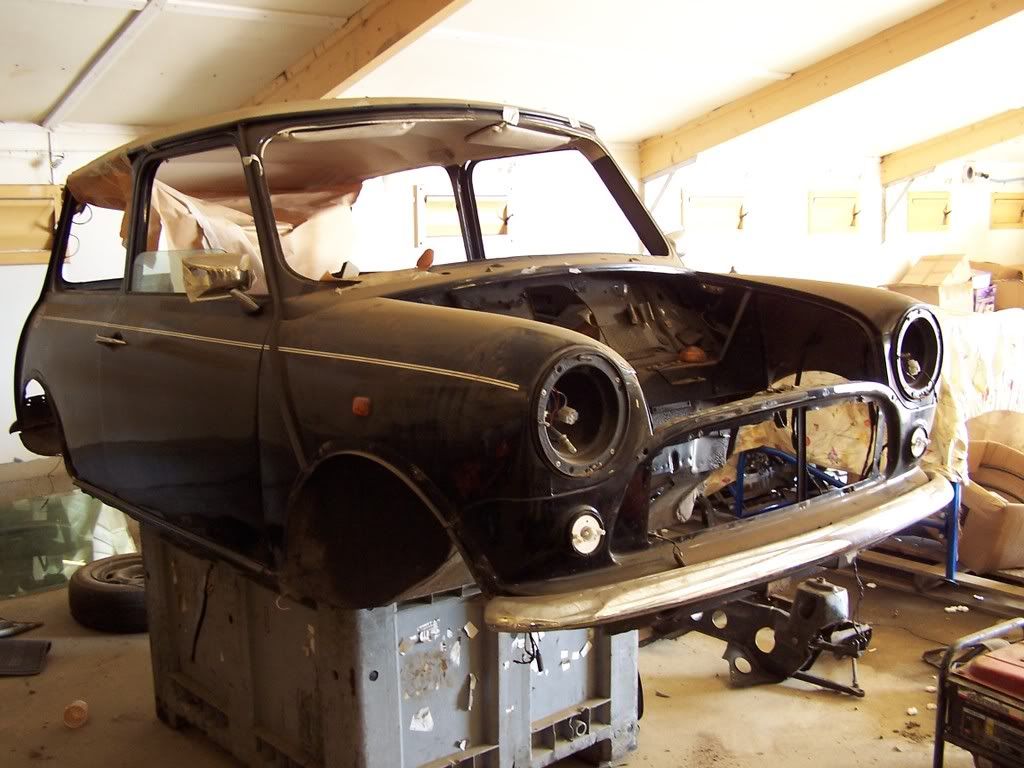 I then decided after driving an Accord Type R for a few years that the VTEC K20A2 from the Civic Type R was going to be the engine of choice, but being a bloke I thought it would be a good idea to get a few extra ponies out of the little 2litre engine so I ordered a Jackson Racing supercharger kit. The kit is for an RSX, American car. I got a couple of snaps of it before I took it to Zcars:

Then the guys strapped it the engine:

To be able to cope with the extra HP and Torque I opted for an Exedy Single Carbon Hyper Clutch and Flywheel (Part # - HH03SBMC), these things can take a max torque load of 254ft/lb which will give me around 50ft/lb to play with later down the line. I have to say it is quite a sext thing: 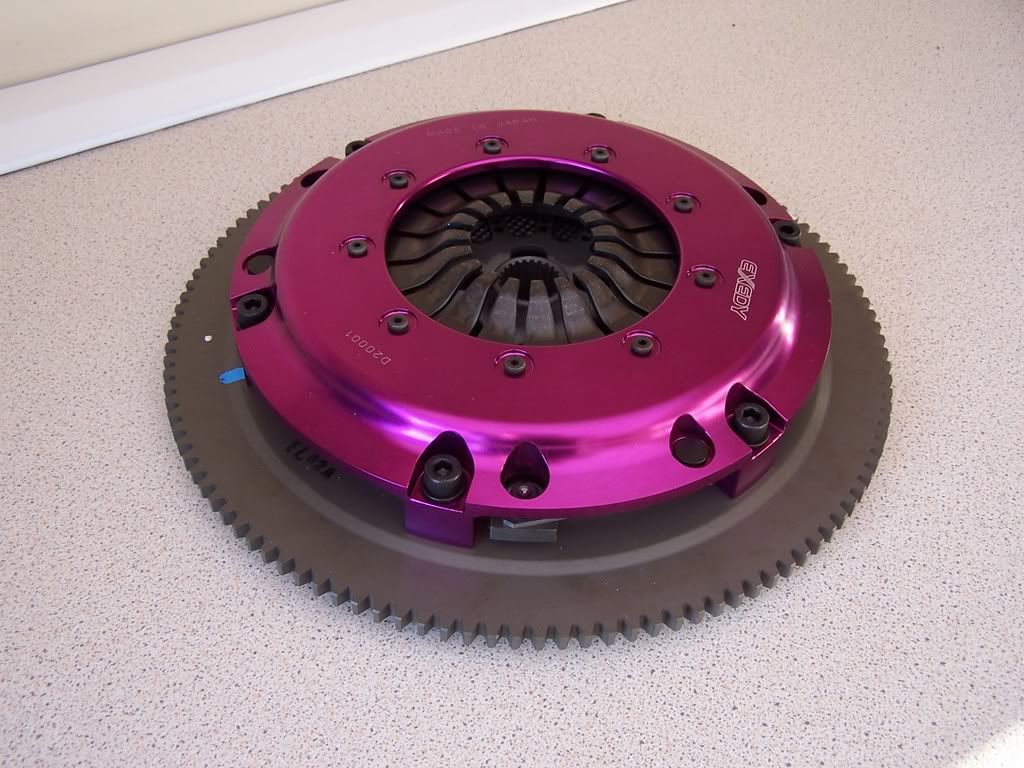 I took along time deciding which seats I was going to use, however one thing that really swung it for me (and I know this is fairly shallow of me) was the name of the manufacturer of the seats - Kirkey. How could I not have seats from a namesake? however it wasnt that easy as the Kirkey seats I had seen in some of the minis just did not look comfortable, that whole wrap around the ribs thing wasnt floating my boat. So after many hours on the kirkey website I decided on the Intermediate Road Race seats, they appeared to be the best comprimise between cost and comfort, plus having a larger frame than most I could order them in hip width. So here they are during the seat fitting, ignore the date on the photo + you can see more in later photo's: 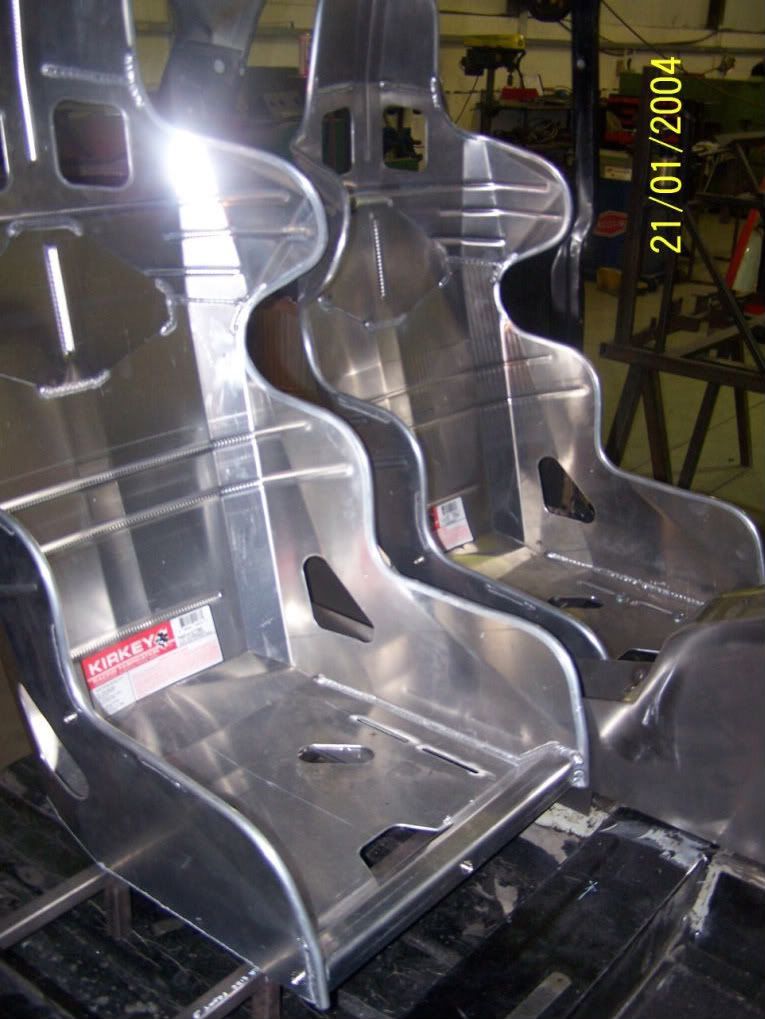 Wheels - again a long time deciding but in the end I opted for Image 3 peice Billet 60P, always a sucker for gimmick I thought the idea if drawing air from under the car to aid the cooling of brakes to be a good one especially when telling your mates over a few beers. I went for 7" on the front and 8" on the back. Again ignore the date on the photo.

Arches were going to be a problem with the width of the rear wheels but Zcars came to rescue with the help of THE STIG, top fibreglasser. I would like to thank Chris and THE STIG for their help with getting these together for me. These are a few pictures of the car pre-spray with the new arches:

As the months went by things slowed as the guys at Zcars were super busy but then we arranged for me to pick the car up in October. I hadnt actually seen it in the flesh with the arches on before it went for spraying so I was a bit nervous as to what it would look like when it was all in fresh paint. I need not have worried as the result was pretty awesome IMO.........

Specs and extras to follow when I get a bit more time and photographs.

Awsome!! Thats guna be a beast!! Have you got a date you want to get it done by?

Looks good Andy! But you know that already.

Have they sneaked a few extra inches on the wheelbase?

The car has had to take a quick trip up to Gallows farm for a couple of bits so will get it back mid November.

I dont have a completion date yet but once I get it back in the garage I will be working flat out to have it ready for early next year, get the most out of it in the 50th year of the best little car in the world.

Wheelbase, no the wheelbase is the same, the rear track is slightly wider due to me having 10mm spacers on the wheels, that way I have room to put 9" wheels on with 220-235 tires, however there arent too many companies that make tires that wide for 13" wheels, Kumho is one of the few I have found.

I am looking forward to that whine, its gonna sound great.......

wow thats one serious weapon, defo got some girth to her

Look sweet !! I put a fidanza fly wheel and helix clutch in my bmw cooper s and it looks very similar in spec to the exceedy you wont be disapointed not in that little monster!!ENJOY car looks very very nicely done!!

What brake and clutch pedal setup do you have in there? Is it original or a component of the Z cars kit?

What brake and clutch pedal setup do you have in there? Is it original or a component of the Z cars kit?

It's a Wilwood setup, purchased from Zcars. No servo assit but you do have a balance bar on it rather than an in-line type bias adjuster.

Ahhh thanks... Got to be worth having adjustable balance.

Ahhh thanks... Got to be worth having adjustable balance.

Looking great.. This car is going to awesome.. Don't keep us in suspense we need more pics and vids ASAP