114 replies to this topic

Hmmm. Summer was here and plop! 6 months without update (and not much done on the car...). This is just the same as last year, it seems it's not the best time for me to work on the car (or I have loads of other things to do :) ).

I was this week at home (motivation was there again) and did some small jobs which motivated me even more to go forward on the project.

The B-post had rust holes, I already started to weld them but after grinding there were some still there, so took again the torch and closed them up and ground the post, now it's all good! 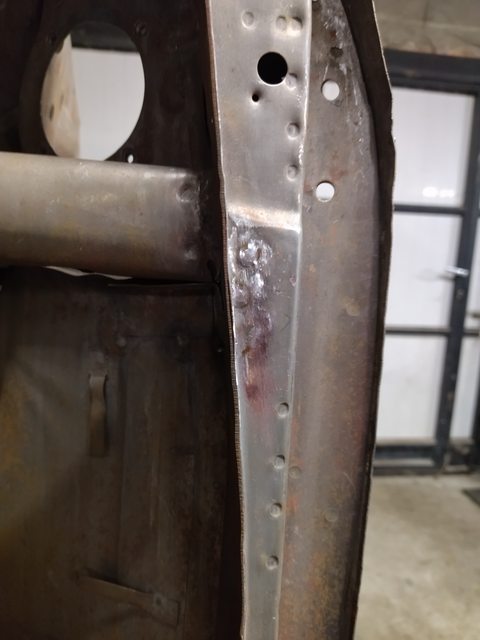 I thought the brackets for the hand lever were too off their position, compared it with the original floor, assembled a hand brake lever and just gave some persuasion to the rear one. A complicated job turned into an easy one as I wanted to cut the old brackets and install them on the new floor... 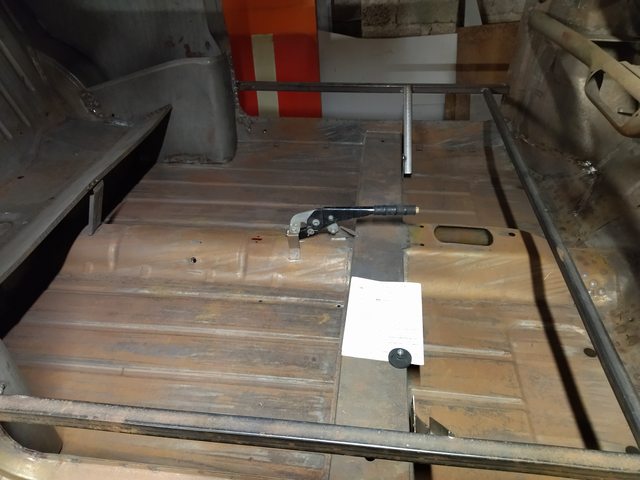 I also made some cleaning of the welds at the rear and in the boot, and with the help of my dad we've beaten the panel up where the fuel lines come through.

The small one (for breather?) has been opened up and all this area had bumps. Now it looks much better. 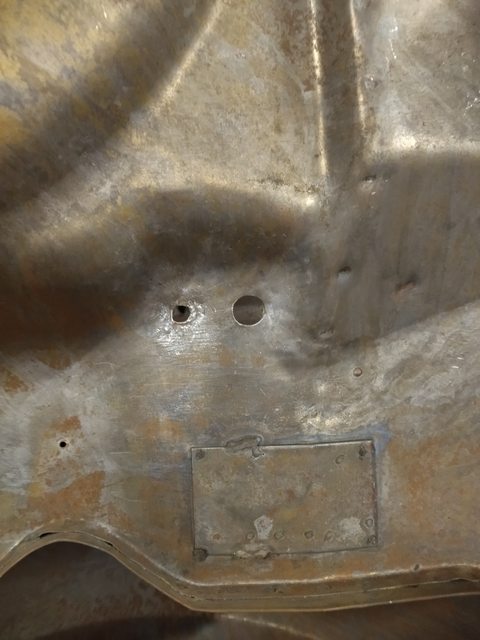 On Sunday I fabricated the metal tabs holding the loom in the cabin and the boot as some were missing.

I took this opportunity to make also two spreader plates for the boot hinges. As I am here I can reinforce them to spread the load.

Now I just have to put them in place. 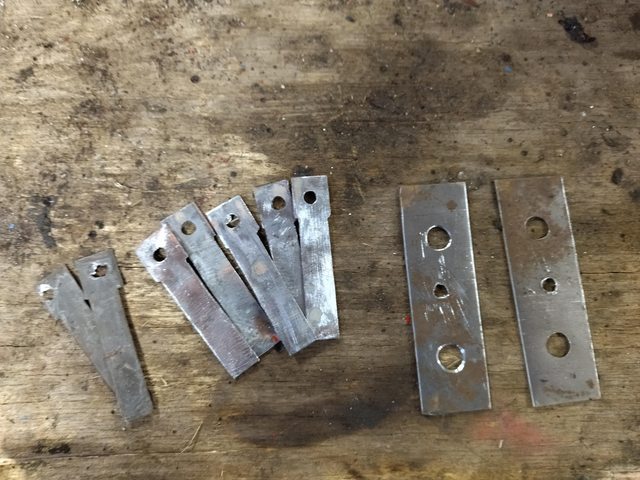 Oh and I found a NOS Rover front panel, it's already had the paint removed and will be put on the car. Now I have all spare parts (front and two wings) for the front once I move over there.

I'm quite happy as this ticked some lines on the To-Do list I have done for the cabin and the boot repairs.

That's it for today, I may do another home office week close to the shed to work on the body on the evening since I have quite a load of motivation now :)

It seems I am able to post only once every 6 months...

Time for a small update :)

I carried over to check all the small details I need to finish the rear and the cabin and also started to look what jobs have to be done before removing the body from the rotisserie. Main reason for it is I am thinking about the front repair (wings and fascia) which need the front subframe to be built beforehand.

So, I carried with a much awaited repair. The left A-post: 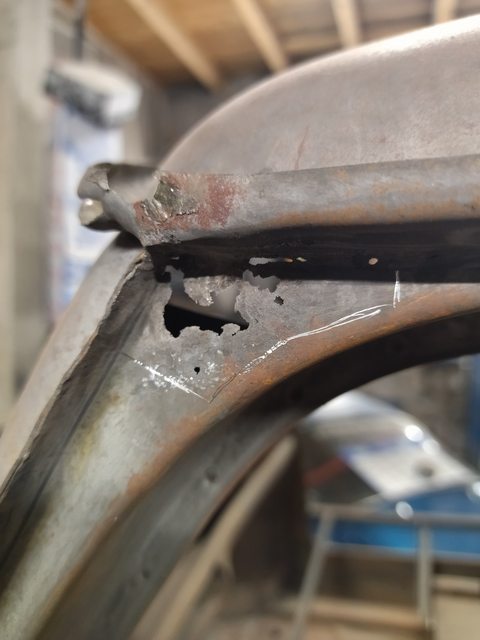 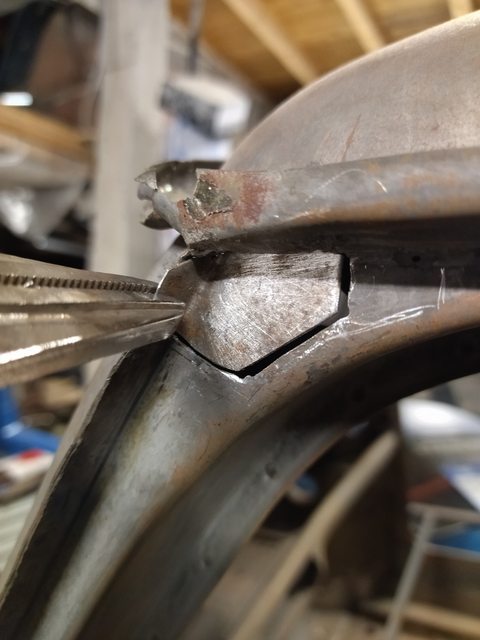 Welded and ground down: 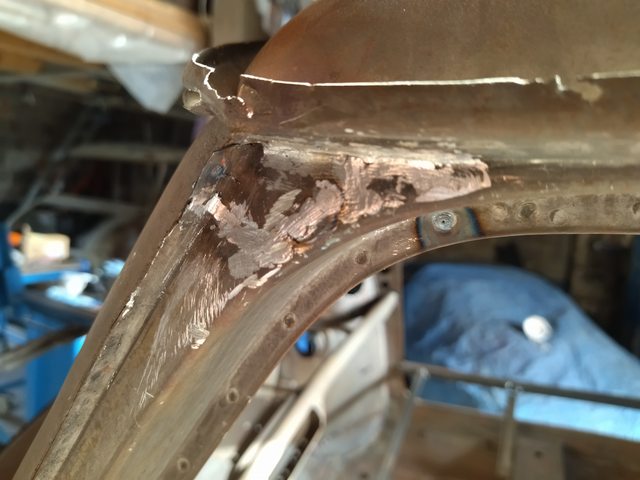 And as a bonus I had time to reweld the inner gutter: 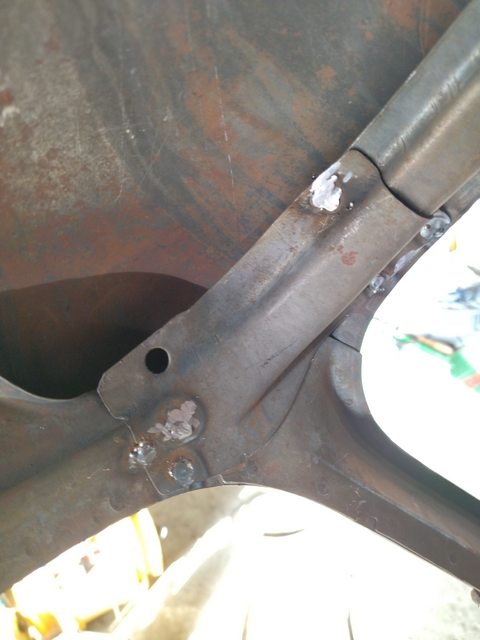 This was a repair I was reluctant to do as it seemed to be an awkward area to repair but it went really smooth in the end :) Only the inside is not looking so pretty, but nobody knows...

I still have the outer gutter to do, but this is a job I will do in a later stage.

Besides that, I got the gearbox casing repaired (Idler gear rubbed on the casing) and sandblasted, that looks really good now! 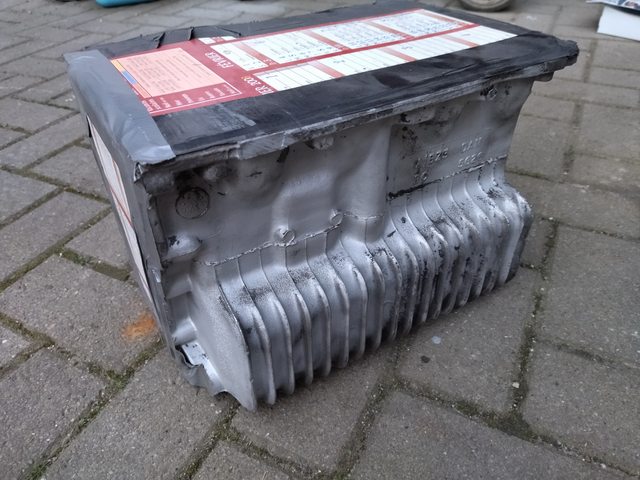 I have found what I believe to be good forks, and I received my gearbox rebuild kit from Guessworks :)

Hopefully I will have some time for me in Mai for speeding up the repairs.

Oh, and I recently bought another set of 5 nice wheels:

I think they have already been sand blasted, some of them need a touch up, but in general they could be used.

My only question is looking at the offset (+28mm), I think they will hide a lot in the arches. It may even be not possible to run them on drums... 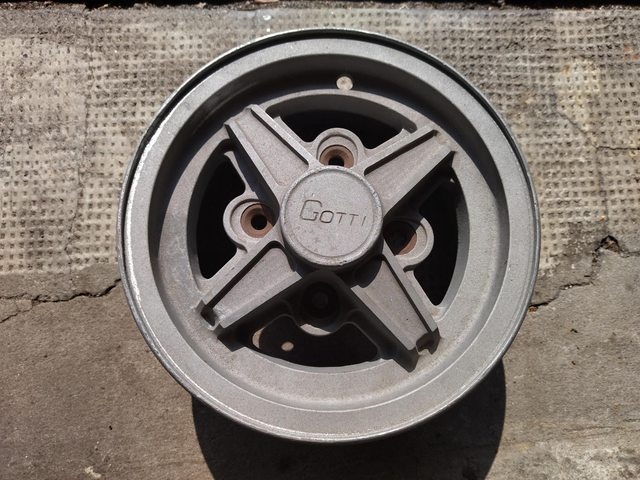 In work. again. For a good time now.

I have 5 weeks off, will try to use them as best as I can. My goal is to finish the main bodywork. Let's see how it works :)

I did small odd works not worth a picture, like cleaning welds, and welding some carpet brackets and so on. But small progress is still progress :)

Beside that, I finally got the paperwork done for the other project Frankie, and drove it (also a Mini) for the first time in 10+ years. what a nice feeling :)

I removed the body from the rotisserie, to put it on a much easier frame for two reasons:

- win some room in the shed

- prepare the last big piece of work: removing the front panel and prepare the assembly of the new fascia, front wings and bonnet :)

That's it sitting proud on the frame which had also been acid dipped at the time. This one stood outside (not exposed to rain) and looks much worse than the body... 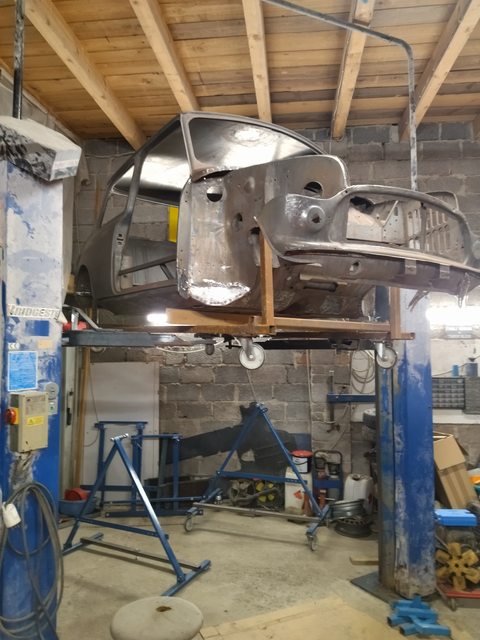 I also did some repairs this morning on the windscreen lower panel, as it still had some holes from removing the old wings... 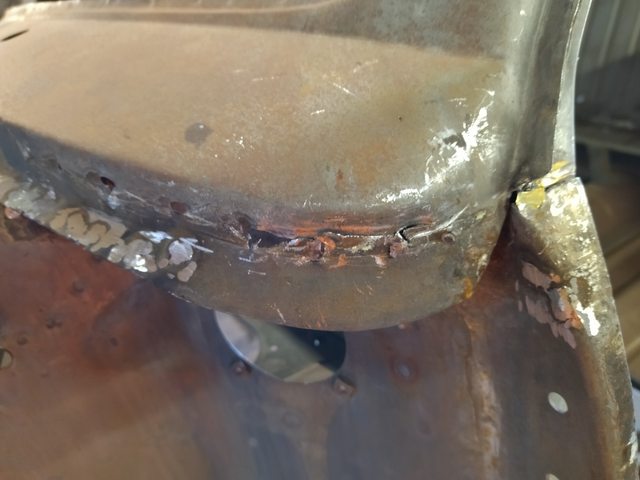 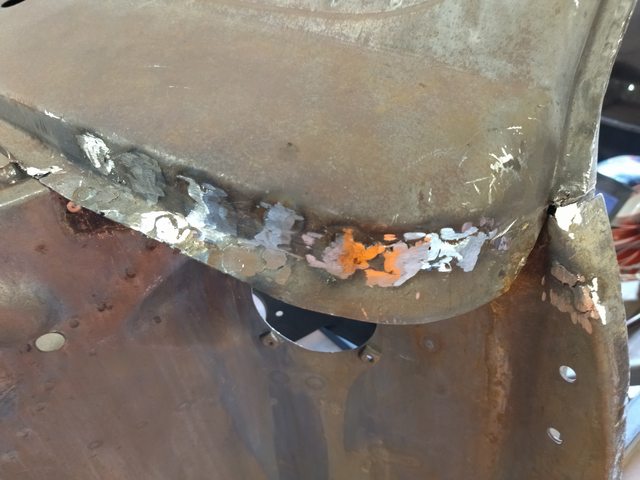 That is what you call a shed?  I believe that would qualify as a 'sports hall' down here! ;)

That ramp will avoid some back issues, trying to put the car in and out of the jig.

That is what you call a shed?  I believe that would qualify as a 'sports hall' down here! ;)

That ramp will avoid some back issues, trying to put the car in and out of the jig.

I can say I am really lucky to have the shed  and all the tools I can borrow from my father. Without those I would surely not be doing what I do...

I removed today the front panel, and directly closed and cleaned the spot weld holes. 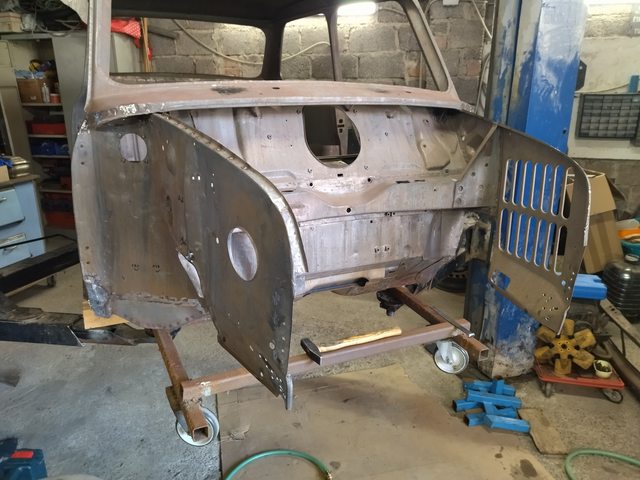 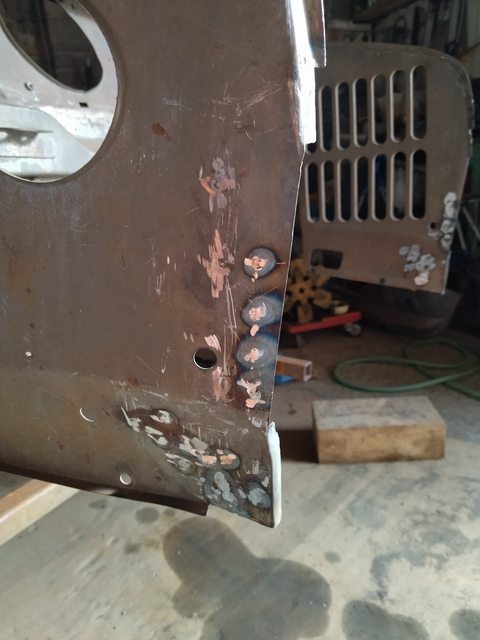 As I was in a good working day (and my weldings looked beautiful today), I carried on by grabbing the front wing I will reuse to start cleaning and preparing for the reassembly. 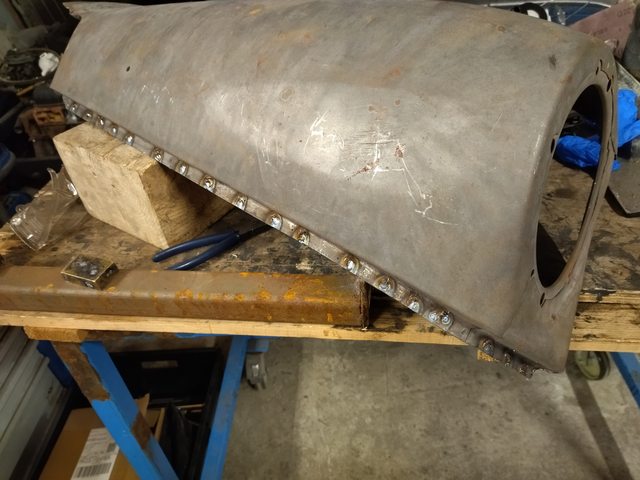 Tomorrow is grinding day and I will go on with the repairs on the wing.

Today was not as productive as yesterday. But I still made a big (at least visual) progress.

As Ben did on his customer project, I built the subframe in: 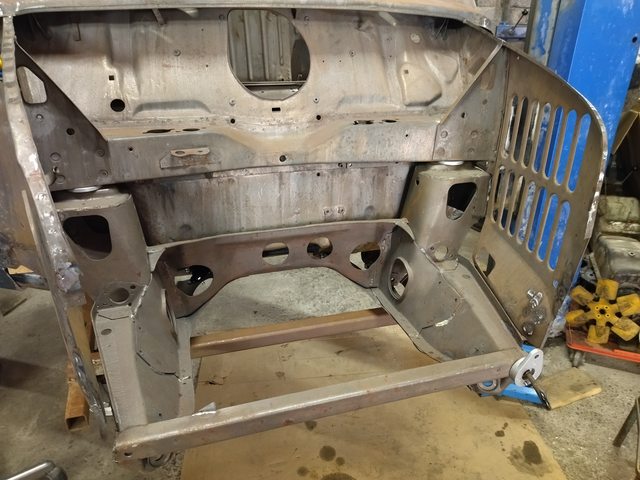 And clamped the front and the wings just to look at a Mini once again :) 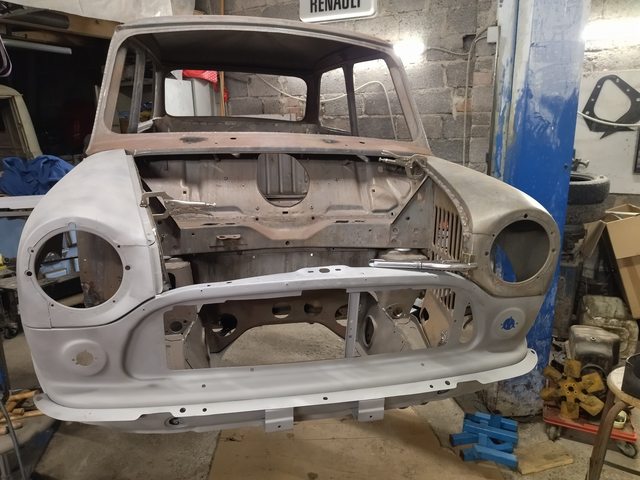 I have to check the gaps, which are not bad at all, and then as Ben showed, will build the doors first in then the A-panels.

I missed my goal of finishing the main body, but as I was on vacation I had also some distraction from the project... Like driving with Frankie, the other one I brought back on the road.

I went further on the preparation of the front. Doors are in, the gaps are not bad at all, same for the bonnet.

I also made some repairs on the left wing which is the original one and will be reused.

And then I went on holiday and did nothing more on the car... But I think I will need one more week for the main body and then maybe two for the doors / bonnet repairs.

So I can see light at the end of the tunnel :)