128 replies to this topic

got a couple of dsn parts for the mini :)

i got an alloy water pump pulley and an engine steady mount plate :)

so i got to work fitting the plate. thank got i fitted the braided lines which made moving the master cylinders easy!

got it swapped but didnt manage to get a picture as it was dark when i finished! disconnecting the clutch pedal pin was a pain in the backside as you have to hang upsidedown in the foot well to wiggle it off!!

i have also found the two middle cylinders only have lower compression than the outer two so i have removed the head to  rebuild it with new valves, gaskets and dual springs :)

coolant is looking nasty so im going to flush it out after putting it all back together. i felt that i may as well widen the heads inlet bores to match the manifold to improve airflow and hopefully gain some power. the pistons and combustion chambers looked like they had loads of carbon build up so i have taken a dremel with the wire bruch to them to clean it up :) more pics to come

the left piston has been cleaned with a fair amount of scrubbing and brake cleaner and the right one has been wire brushed with a dremel. im ipressed that the markings are still on the piston tops though! they looked proper grim when i first took the head off! the combustion chambers looked the same before wire brushing those too

what all four and the mating surface looked like once cleaned :)

whilst i was doing that i checked the water pump for wear an put new bolts, gaskets and bypass hose on it. the old one looked grim!! 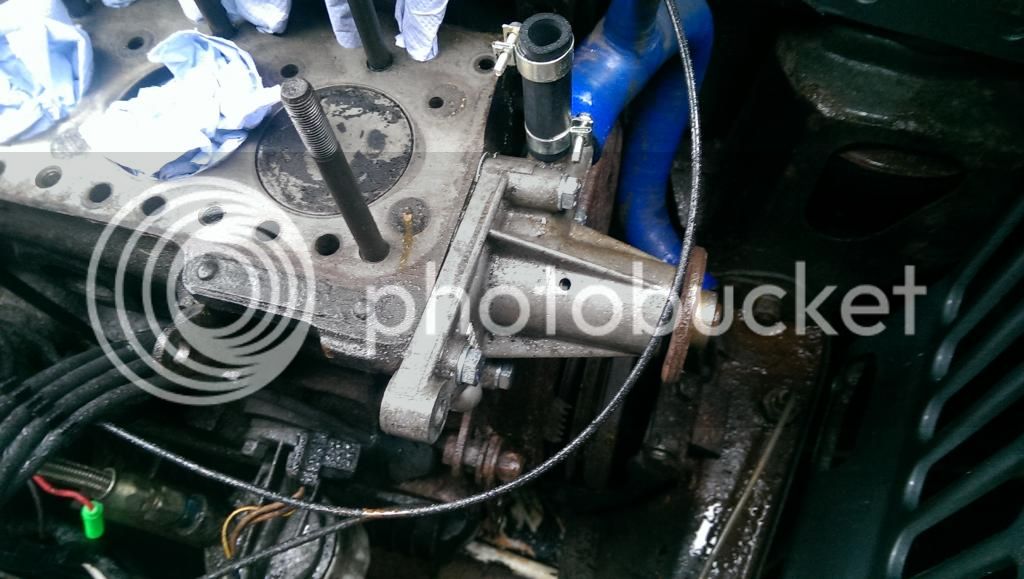 to the head. after stripping it and cleaning the carbon and oil off i used the dremel again to widen the inlet ports to match the inlet manifold.

the valves showed signs of wear with the micrometer so i replaced and lapped them in to their seats. with the amount of build up on the valves there is no way any of the valves wear properly sealing before.

sorry for the upside down pic! i fitted all new oil seals after lubing the stems with 20w50

i oiled literally every contact patch in the rocker/valve assembly

i fitted the spring top hats and the collets using this spring compressor. i used the wood to save me scratching the valves/head

and there's one done! just 8 in total. i found using a dob of grease to hold the collets in place whilst releasing the spring helped a bundle

new head gasket and bypass hose waiting for the head. i used sealant on all the other gaskets to stop them leaking ai and water. I would advise this and to put the manifold gasket in place before putting the head back on as it saves fighting more with the exhaust manifold to fit it later.

and sort of finished.

i got this done and have driven about 120 miles on it so far. i just need to re do the rocker gaps again which i hate doing and hope that the head gasket seals its self as its currently leaking air which can be seen as i smeared oil around the join and it clearly bubbles up :/

DUDE! Are you planning on stripping the rest of this engine and rebuilding?

All the dremel debris from scrubbing the piston tops is gonna be heading down the bore holes!

i used a fair amount of paper to block the oil holes and i greased around the edges of the pistons to catch the debris. i turned the engine over by hand to remove any crap and i took care when cleaning it out before rebuilding. also did a full service after incase any bits got in the oil or coolant. my main worry is the damage being done by my crunchy seconds gear!

just bought a couple of things :) one is quite exciting! and the other is a working gearbox to replace my crunchy one :) and it came from another studio 2!! i just have to wait till march for it! so i imagine i will have the engine out over the Easter break :)

been a while but ive not been without things to do on the car! so here we go

Head came off again and was replaced with this beaut i got for £350!

its a Cooper head which has had much work done to it. 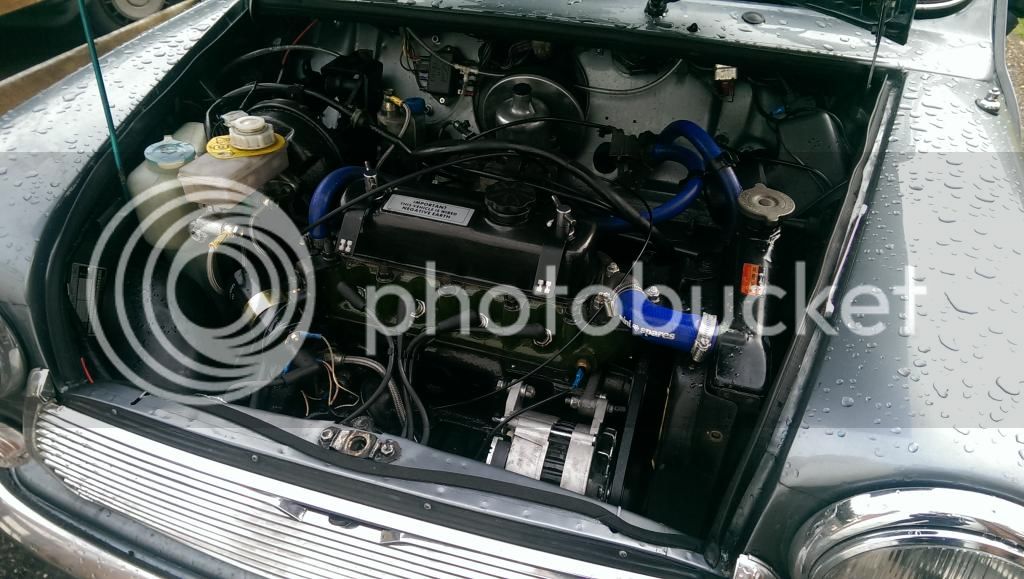 And all fitted. it hasthe same low end power but it has plenty more up top and its surprisingly more fuel efficient on the motorway! still havent maxed it yet. mainly because im scared to over rev it.

had some issues with the fuel float following this as the valve began jamming at certain positions which made driving interesting! i just took the valve out and wet and dried the rough edges

then i got a load of rocks dumped on the mini by a truck i was passing....  i wasn't amused and suffered a few stone chips, a dented grille and a smashed windscreen. the stone chips were filled and polished as best i could. swapped the screen after my insurance wanted £90 to do it! screw that i did it myself for the cost of the screen at £35 :) the grille is still dented but i think ill leave i as a bit of history to the car.

looking lovely after a wash. even used tyre pen to show everyone my new yokos which are actually awesome! they have such a good feel and much nicer to drive with. especially in the wet.

then it was time to put the decals back on :)

all was looking well. and went to my first post resto show at brooklands. what a lovely day we had for it.... not.

so new radiator was bought and installed the next day.

painted it and the cowling first. im trying not too take too much character away from this car. i really dont want it to be a show queen that im scared to take out so im starting to leave things looking a bit tatty such as the cowling. ive sanded it back a bit and took the loose paint off and gave a clear coat to prevent more rust. i think i shall do this for most components in the engine bay when they get removed at some point or another. i dont think minis can pull of the complete rat look but i think painting over stuff to make them look pretty is what i want with him any more.

also i adjusted the brakes and re sprayed everything with dynax oil to keep it alive a bit longer :)

i hope to pull the engine sometime late may so ill keep this updated!

Looks good with the decals refitted.

Gives it something extra

so the mini went back to the body shop for a total of 4 weeks to get some bubbling sorted out. ended up having the rear bumper lip re-welded as rust made its way into the join :/

meanwhile i cleaned up my new gearbox and fitted a central oil pick up. I'm trying to get as much reliability from the car whilst i use it as my daily for my work placement from uni. So as i was taking the engine out to change the box i fitted all new gaskets, oil pump, new clutch oil seal and the best quality head gasket i could find.

engine was looking fairly mucky but it cleaned up pretty well an there's plenty of yellow paint still on it!

I also fitted a Sw5 camshaft and new followers which will hopefully give me some more power :) i checked the float whilst i had the engine and box split and im quite happy to find next to no movement in the crankshaft! 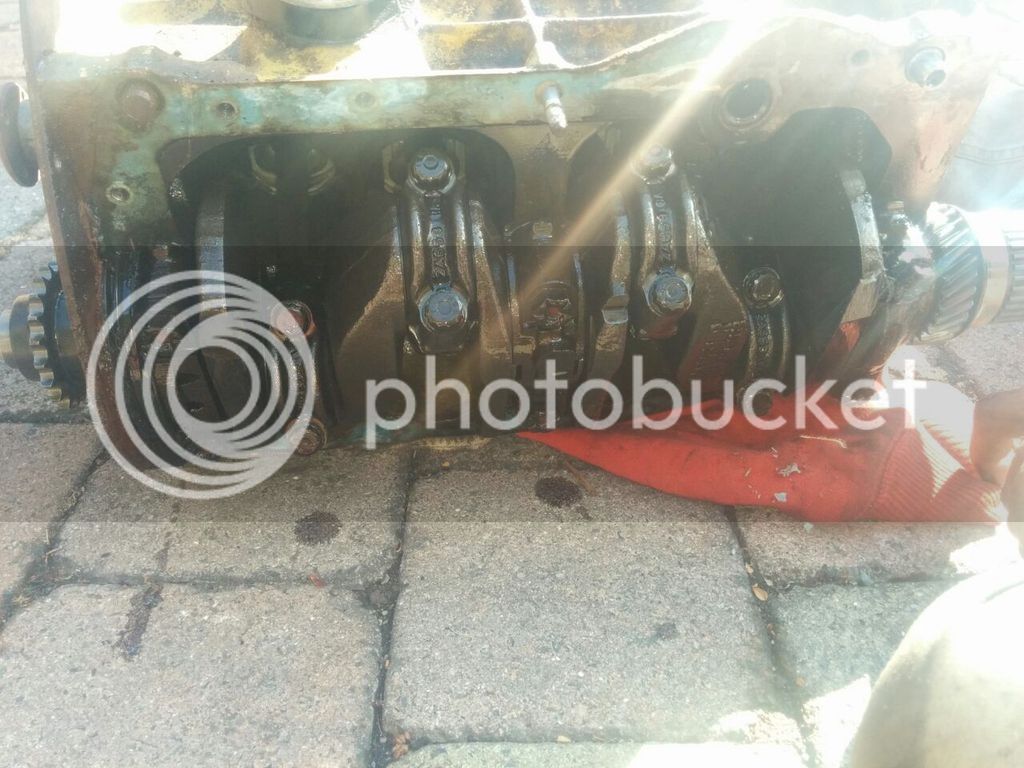 new oil pump in place and the engine on the new (to me) box.

The engine and everything else is now back in the car so im now just waiting on an oil filter housing (as mine was cracked) and gasket which will be tomorrows job.

So i got the engine and box back in along with the rest of the engine bay. I gave it a bit of a clean up and polished the dash pot on my bench polisher :) also I wrapped my exhaust before i put that back in which if nothing else makes it look better than the rusty look.

If you havent worked it out already, i am no photographer :/ #blurr I took it to VMaxscart to get it tuned up. stuart there really knows how to tune minis and i fully recommend him to anyone local to Walton area

Im quite happy with the results! makes it worthwhile going to all that effort!