87 replies to this topic

I like what you have done the dash rails. I was also thinking of doing this. Just wondered, do you remove the old covering or cover straight over the top?

by the way love the button switches.

I had a look at removing them, but they provide the shape and structure to the rails.

Been busy of late, so a lack of updates. Ive managed to fit the carpets and ICE. First I ran all the cables (RCA down the inner sills from back to front; speaker cables down opposite side in some mesh conduit).

Newton carpets went in next:

But the rear didn't go in until I'd fitted 4 JL 3W6 subs under the rear bench.

Edit: steps added:
A few people have been asking how I installed the rear subs. So here's how I did it (not got photos for every step)

First I set about creating the board that would hold the subs. I opted for 18mm MDF, which I cut and doubled up to create a thickness of just under 1.5 inches. I marked up the holes and cut them out with a jigsaw. These were later refined with a router

This was glued together with wood glue and clamped up to dry overnight:

Whilst the baffle was drying I sealed the edges under the rear bench with caulk. Before laying down lots of silent coat:

This was overlaid with closed cell foam:

Once the baffle had dried I set about trial fitting it in the car. One thing that becomes apparent is the weight, even without the subs in, because it'd do some hefty damage if it were to fly across the car. To that end I installed some aluminium angle down either side and across the bottom. I stuck some draft excluding foam to the inner edge of this angle before bolting it solidly to the car (the bottom pieces where glued in with gorilla glue).

I then marked up a further 6 holes along to top edge of the rear bench. A wedged piece of wood was added to the middle support of the bench, ready for final fitting. Basically the whole thing is held in 14 nuts and bolts, plus two screws for good measure. It's not going anywhere and the seal is good (more on this later).

Next I drilled the holes for mounting and test fitted it. I was then ready to drill the speaker mounting holes and covered the whole thing with some acoustic carpet. The trick here is to allow the glue to dry back to a tacky state before covering. The holes where then carefully burnt through with a soldering iron to make fitting neat and easy:

I used flush T nuts on the back and some quality bolts to hold the speakers in place:

I then had to wire the whole thing up in parallel, I used some quality oxygen free cable and wrapped it in some mesh conduit. I ran all the cable along the top (held in place with cable fasteners) to the pre-drilled hole that routed the cables to the boot. Note the draft excluding tape in this picture too.

Underlay and carpet came next, before the new board and subs where bolted into place. I added closed cell draft tape to every edge, which squashed down to make a good seal.  At this stage it weighed a fair bit and required two people to hold the thing in place to ensure a good fit:

And that was basically it.

The key thing to remember is that the baffle needs to be thick enough, secured well and be as air tight as possible.

Powering the subs was a little head scratcher. I decided upon an old school Genesis Profile 2 Ultra. I ran two subs off each channel in parralel to deliver 450 watts of bass:

My components are powered by the profile 4 you can see mounted next to it. Fully active too

Fitted the new dash too. I went for cream Smiths dials which look ace with the carbon dash. 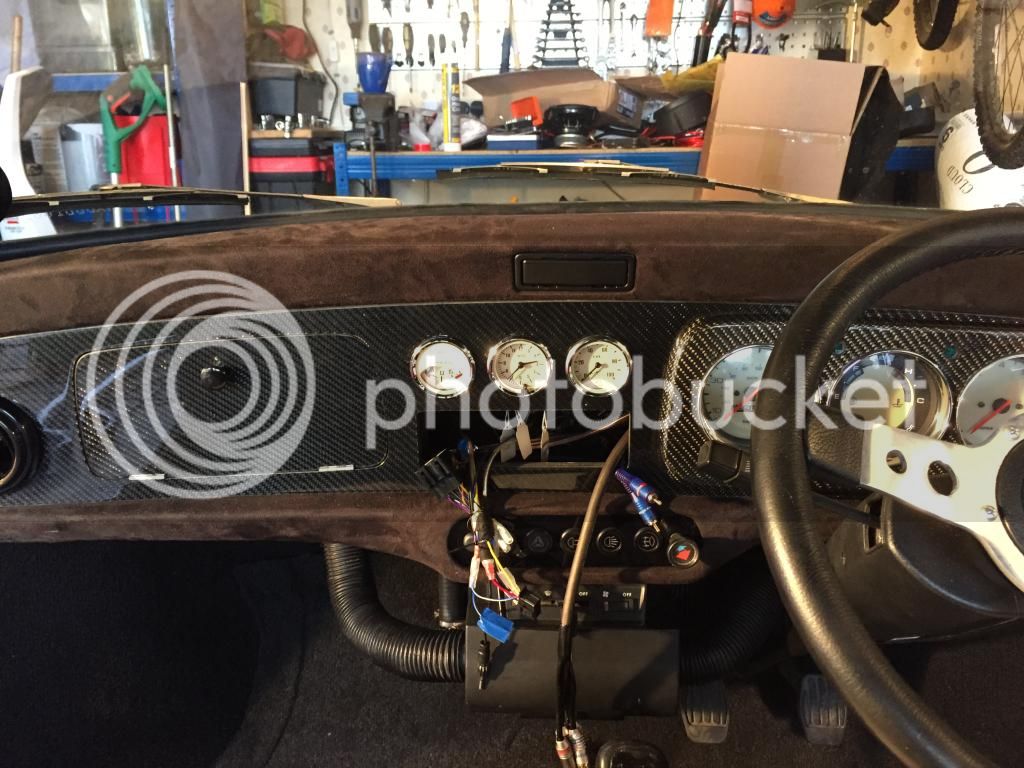 I need to source some better ducting for the air vents because the stuff supplied was too short and too rigid.

After the car was sprayed it sat at the garage for some time collecting grime and dust. This actually scratched up the paint a little. This weekend I started rectifying this by first polishing with Autoglym and then waxing with Farcla G3 paste. I've only done the roof so far but am pretty happy with it:

This was done by hand but I'm off to a detailing guy later for some more tips before I tackle the rest of the car.

Okay. So more paint refining, correction and waxing has led to this:

Under the lights it looks amazing. But i can't wait to get it out in the sun where it'll look even better:

Big up to Matt as System Clenze Weston - 2 days of hard graft has been totally worth it in my opinion.

Okay. So more paint refining, correction and waxing has led to this:

Under the lights it looks amazing. But i can't wait to get it out in the sun where it'll look even better:

Looking really good :) what size wheels are they 12x6 ? Did you have to cut arches to get them in?

Looking really good :) what size wheels are they 12x6 ? Did you have to cut arches to get them in?

yes they're 12x6 Revos. The front arches did have to be trimmed and a the lip put back in place.

They look stunning on there pal nice one...

After a little digging i found where the exhaust was blowing from (Manifold) so went all out on a side exit Maniflow system.

It looks ace, sounds great and the engine now runs much smoother. Will get a vid soon:

man you've done a good job on this car. Absolutely love the colour combo with the black and blue!

man you've done a good job on this car. Absolutely love the colour combo with the black and blue!

Cheers dude. I think it adds to it whilst keeping a touch of the original.